Your Guide to Light Up Night: How to Get Around, Where to Go and What to Do

Wondering where to park? Which bus routes will get you into town? Where to get the best view of the fireworks? Look no further. 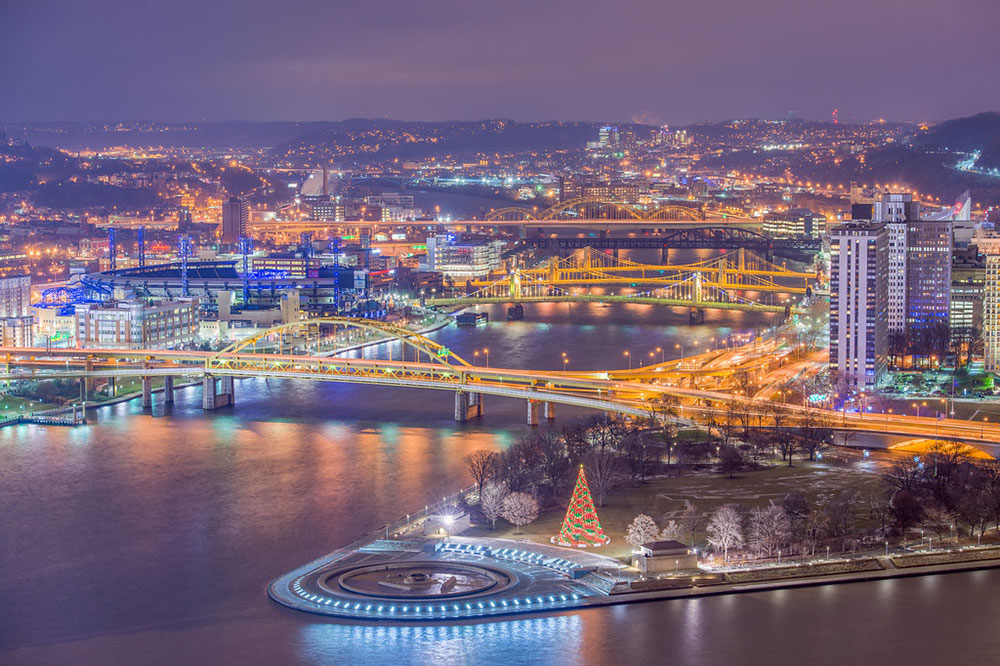 After the pandemic pressed pause on life as we knew it last year, Pittsburgh’s Light Up Night is back in 2021 with a full line-up of fireworks, tree lighting ceremonies and more. In fact, it’s so chock-full of things to do and see that it’s spanning two nights, Nov. 19-20, this year rather than the one night that has traditionally ushered in the holiday season.

Blanket advice: Get there early. Light Up Night is wildly popular, and the crowds can get pretty big. Even though most of the tree lighting ceremonies and firework displays don’t start until after nightfall, you can grab dinner at one of Downtown’s restaurants and then make your way out into the festivities after dusk.

Next to the U.S. Steel Tower at 600 Grant St., the Pittsburgh Creche is on display as the only authorized replica of the nativity featured in St. Peter’s Basilica in Rome. There’s also a pop-up cocktail bar and beer garden that opens at noon in EQT plaza, and the 19th annual gingerbread house display and competition at the City-County Building; winning entries can be seen behind glass on the Grant Street portico.

With so much going on, it may seem overwhelming, but have no fear — we’re here with your insider’s guide to all things Light Up Night.

For most folks, whether you’re from the city proper or from a little farther away, the fireworks are a staple of the evening. This year, you can catch them in a few different places.

At 5 p.m. on Saturday, Nov. 20, the City of Pittsburgh Tree Lighting will be held at the City-County Building on Grant Street, complete with Zambelli rooftop fireworks.

At 6 p.m., catch the Highmark Christmas Tree Lighting at the corner of Stanwix Street and Penn Avenue, with another round of Zambelli rooftop fireworks.

Finally, the BNY Mellon Fireworks Spectacular with a supersized Zambelli finale will be held at 9:30 p.m. at the Allegheny Overlook on Ft. Duquesne Boulevard.

So where should you go to watch the fireworks?
For prime viewing of the grand finale, grab a spot along the North Shore River Trail. While the crowds can still get tight because of the sheer volume of people, the trail offers more space than a crowded city block, and you might even be able to social distance.

Some folks prefer to watch any and all of the fireworks displays from a perch, whether it’s on the top of a parking garage Downtown, from a rooftop bar or from the scenic Grandview Overlook in Mount Washington, where the displays will be set against the backdrop of the lit-up city with all three rivers in view, too.

Parking in Mount Washington may be easier than finding a space Downtown, but it’s still a good idea to get up there early if you don’t want to walk very far, and if you want to beat the crowds. Or, take a bus — routes 39, 41, 48, 51 and Y49; the blue, red and silver lines of the T; and both the Monongahela and Duquesne inclines will get you pretty close, depending on where you’re coming from.

If you’re just hoping to see the fireworks and aren’t partial to the rest of the Light Up Night festivities, you can check out the West End Bridge and West End Overlook, which both provide great views of the city skies despite being a little farther away. Parking may be a little tricky, but the spots offer an excellent view of the Golden Triangle.

Anyone planning on driving into town from the north should keep road closures in mind.

The Department of Public Works announced Monday that it has granted a permit to the Pittsburgh Downtown Partnership to close the Roberto Clemente (Sixth Street) Bridge. The closure will occur from 9 a.m. to midnight on Saturday, Nov. 20.

There will be no posted detour. However, drivers who need to get around the closure can use Liberty Avenue, Seventh Street, the Andy Warhol (Seventh Street) Bridge and Isabella Street.

So how should you get there?
If you don’t mind a bit of a walk, you can park somewhere along the North Shore or even on the North Side to make your way over into the city. The parking and traffic situations can be tough Downtown during the events, but the festivities were moved to Saturday from Friday to avoid rush-hour kerfuffles, and there are ample parking garages around the city if you don’t mind paying a fee.

You can always take a bus or the T, too — from the North Side, you can take the 8, 12, 13, 16 and 17 into town, or hop on the subway to Gateway, Steel Plaza or Wood Street stations, depending on where in town you want to go. From the South Side, you can grab a 48 or a 51, or catch the T into town from Station Square.

If you’re coming in from the east — Oakland, Squirrel Hill, Shadyside, Morningside, East Liberty, Wilkinsburg, etc. — keep an eye out for any of the 61s or 71s, 77, 87, 88 and P1, among others. From the west, you can hop on the 27, 31 or a 38. For a full list of buses and detailed directions to get you to and fro, check out Port Authority’s website or download the Transit app.

If you plan on staying late, plan ahead, as some bus routes may stop running before Light Up Night ends.

Unless you’ve got a good bit of money burning a hole in your pocket or an ample amount of travelers in your group willing to split the fee, you may not want to bank on a rideshare service like Uber or Lyft. During peak times, these services can get quite pricey, even for short trips, and some riders might experience long wait times due to a shortage of drivers and a surge of riders. Being both a Saturday night and a special event, Light Up Night will be a double whammy.

What else should you keep in mind?
Face it, we live in Pittsburgh — the weather is unpredictable. You’re going to be outside for a long time, and while 40 degrees might not feel too bad when you’re walking from your car to your front door, prolonged exposure can numb your fingertips and chill you to the bone. Check the weather beforehand, but expect the unexpected. Bundle up, and bring an umbrella or poncho in case it rains. Comfortable shoes are also a must.

We’re also still in a pandemic. Even though vaccination rates continue to climb, the coronavirus is still out there, no matter how much we wish it wasn’t. While masks aren’t officially required outdoors, it’s still a good idea to wear one if you’re in a large crowd, especially if you or someone in your household isn’t vaccinated.

If you want to kick off the holiday season Pittsburgh-style but aren’t up for the Saturday crowds, take a look at the line-up of Opening Day activities set for Friday; they include the Holiday Market, live music, a cocktail and beer garden and a tree lighting ceremony at noon at the Allegheny County Courthouse.