Customers can enjoy a Mindful Brewing Co. pint daily from noon to 7 p.m. 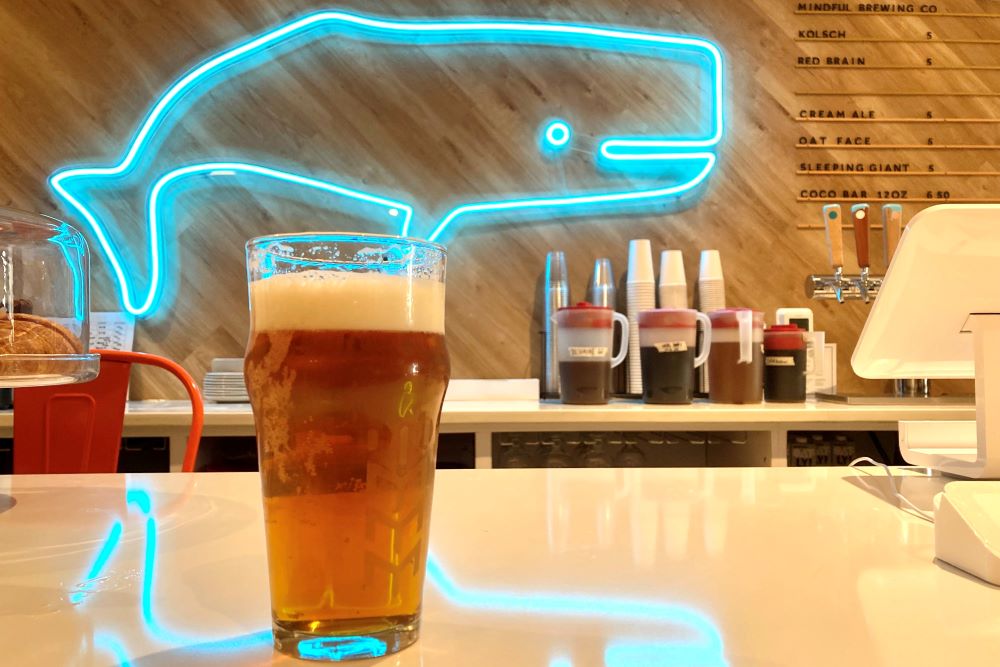 Mindful Brewing Co. is starting a new chapter in Bloomfield.

The Castle Shannon-based beer maker now has a taproom inside of White Whale Bookstore at 4754 Liberty Ave. Six taps will flow daily from noon to 7 p.m., allowing bookworms to catch a buzz while they browse. Masks are still required at the shop, so once you finish your pint, put it back on.

A grand opening celebration was held on Oct. 8, but, in true librarian fashion, it was done so quietly. Customers who purchased a tome during the bash got a beer for a buck.

The partnership between Mindful and White Whale began in 2021 when bibliophiles Adlai and Jill Yeomans purchased the adjacent storefront to include more retail space and a cafe that serves coffee and pastries, including gluten-free goodies.

Mindful Co-Owner Dustin Jones grew up in the neighborhood, where his family has been rooted for more than three generations.

Zack Woods, marketing director and event coordinator for Mindful, says the two businesses are planning a collaboration beer that will be released in early 2023. It will only be available in Bloomfield.

The White Whale team has full control over which hoppy products they offer from the brewery’s full lineup, but they’ll work together to consider seasonality and what libations may do best for the Little Italy location.

“The White Whale Bookstore, cafe and taproom is a community staple and we will, of course, be working with the team to book both public and private events that suit the space and reflect our collaborative goals,” Woods says.

The brewery recently overhauled its Carnegie location, which opened in 2019. The 2,500-square-foot former Pizza Hut at 1001 Washington Ave. serves elevated pub fare such as smashburgers, sandwiches, salads and loaded fries.

A pop-up taproom at Trax Farms in Finleyville will operate from 11 a.m. to 5 p.m. on weekends through Oct. 23. In addition to Mindful beers on tap and in four-packs to go, the space will be a showcase for a variety of local art curated by The Manos Gallery in Tarentum. All works are available for purchase.

Aadam Soorma, head of marketing for Trace Brewing on the opposite end of Bloomfield, says the brewery — which serves coffee starting at 8 a.m. each day — is in talks with White Whale to offer discounts to customers who visit both locations.

Still thirsty? Check out our guide to 20 Pittsburgh-area breweries that have multiple sites. Vinyl album fans can also grab coffee or beer at The Government Center on the North Side. Cheers!