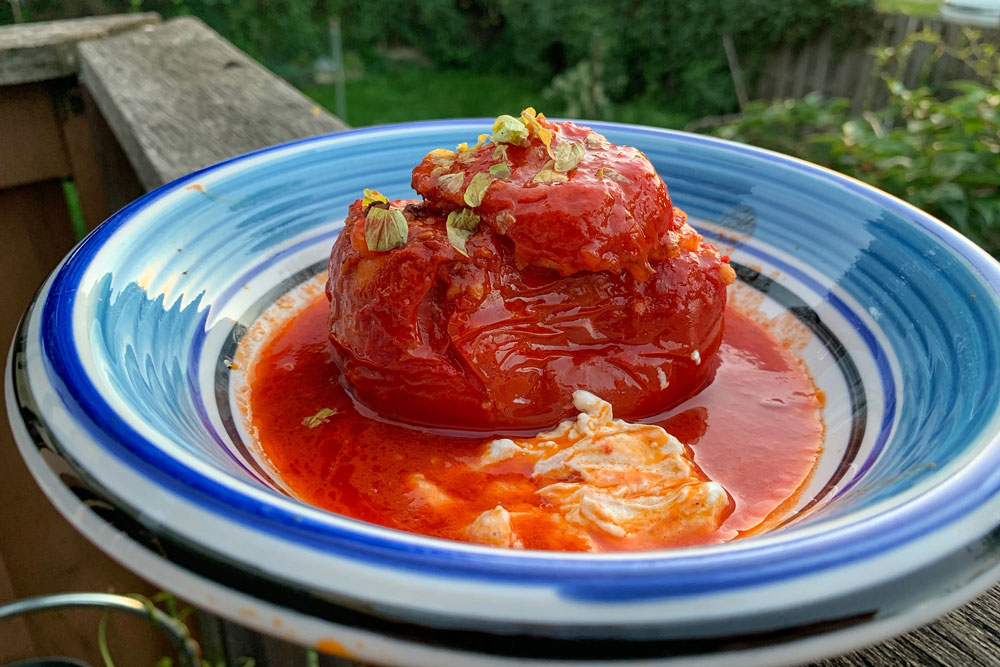 In my opinion, Apteka owners Kate Lasky and Tomasz Skowronski are operating the Pittsburgh restaurant that is best adapted to the repercussions of the COVID-19 pandemic. They’ve done so by taking a two-pronged approach: honing in on the restaurant’s food and beverage program and opening a wine shop.

“So much of the past four years has been us having to maintain this barge that was moving forward at a steady rate. We spent four years working crazy hours, and much of that was keeping up and maintenance. It was hard to make changes with a big staff, with a lot of people coming in to eat,” Lasky says.

Offering a catalog of natural and biodynamic wines sold by the bottle, for example, was an idea they thought about launching more than a year ago. But starting a bottle shop from scratch is a hefty undertaking under the best circumstances. And the flow of the restaurant — placing an order at the front counter prior to being seated — lent itself more to quick by-the-glass sales than it did to having the time to educate guests and staff on the nuances of ordering a bottle of natural wine.

Natural wines have gained traction with adventurous wine lovers, but, aside from a handful of restaurants such as Apteka and Bar Marco featuring them on their wine lists, Pittsburgh, has been slow to embrace the movement. Having a wine shop with a catalog of more than 100 bottles to choose from is a big deal for the city. “Pittsburgh is an interesting market for us to figure out. There’s an openness to some unusual stuff, but there are gaps in people knowing what to go for,” says Skowronski.

There isn’t a formal criterion defining natural wine. Basically, it’s a wine that is made with minimum interference from the producer, meaning the grapes are grown with organic or biodynamic farming practices and are picked by hand; the fermentation process is allowed to happen naturally; and, the wine is bottled without filtration fining agents or the addition of sulfites. Natural wines tend to be produced by farmers who grow grapes that work best in their location. While popular wine grapes such as Riesling, Chardonnay and Syrah are used in some geographies, less universally known varietals such as Malvasia, Grolleau and Hondarrabi Zuri also are part of the mix. These factors allow for wines that can exhibit funky, yeasty, grassy and wild flavors not typically found in standardized commercial wine.

The differentiation in flavor profiles means that not every bottle is going to be universally appreciated. To that end, there are in-depth descriptions on the Apteka website about the makeup of the wine, including tasting notes, farming methods and sometimes even a video about the producer. There’s also a What We’re Drinking section for those who don’t want to think too much.

Lasky recommends that customers who want to learn more about the Apteka wine selection stop by on Wednesdays or Thursdays when the kitchen isn’t open. On those evenings, front of house manager Kolin Smith is on hand to sample selections and talk to customers about what might resonate with them. “If you’re curious about wine, you can base the conversation around something that is there to taste, smell and see,” Lasky says. 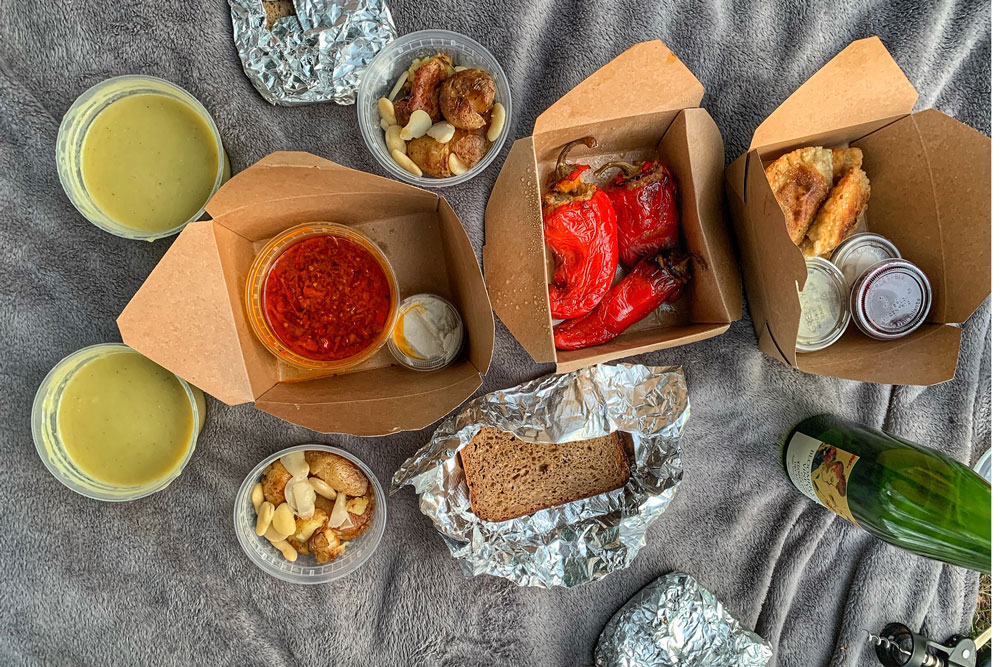 Lasky and Skowronski also have taken the necessary restrictions of the current moment to consolidate the restaurant’s food and beverage programs. By operating with a takeout only, pre-order model, they’ve honed-in a menu that speaks to the restaurant’s roots in Slavic cuisine and its location in western Pennsylvania. “We have time to experiment. We have time to go outside. We can have a little more fun doing that stuff. We are a lot more nimble. We can change dishes. We can work with farms in a different way,” says Lasky.

House-favorites such as pierogi are still offered, but what’s exciting are the frequently rotating seasonal dishes such as chłodnik (chilled beet soup with yogurt, cucumbers, seared beet greens and kohlrabi kraut) and faszerowane pomidory (oxheart tomato stuffed with long rice, zucchini, onion and fermented tomato) that celebrate the work of farmers such as Chris Brittenburg and Aeros Lillstrom (Who Cooks For You Farm) and Jason “Joddo” Oddo (Bitter Ends Farm Co.).

Operating with limited kitchen hours — Friday and Saturdays are the only evenings food is offered — allows Lasky and Skowronski the space to develop new recipes, such as a ridiculously creamy and delightful sunflower ice cream and to pursue long-term projects such as plum knedle; they expect to have that one on the menu in the upcoming weeks. “It takes time to figure out something like a sunflower milk ice cream,” says Skowronski.

The two are spending time walking through the woods and foraging, something both of them used to do more frequently prior to opening Apteka.“It’s a matter of squaring sensibilities, finding stuff here that goes after the spirit of the cuisine. The more you walk in the woods, the more you can find ingredients that will work,” Skowronski says. That means mushrooms, of course, but also ingredients such as wintergreen, teaberry and fallen Magnolia fruit. 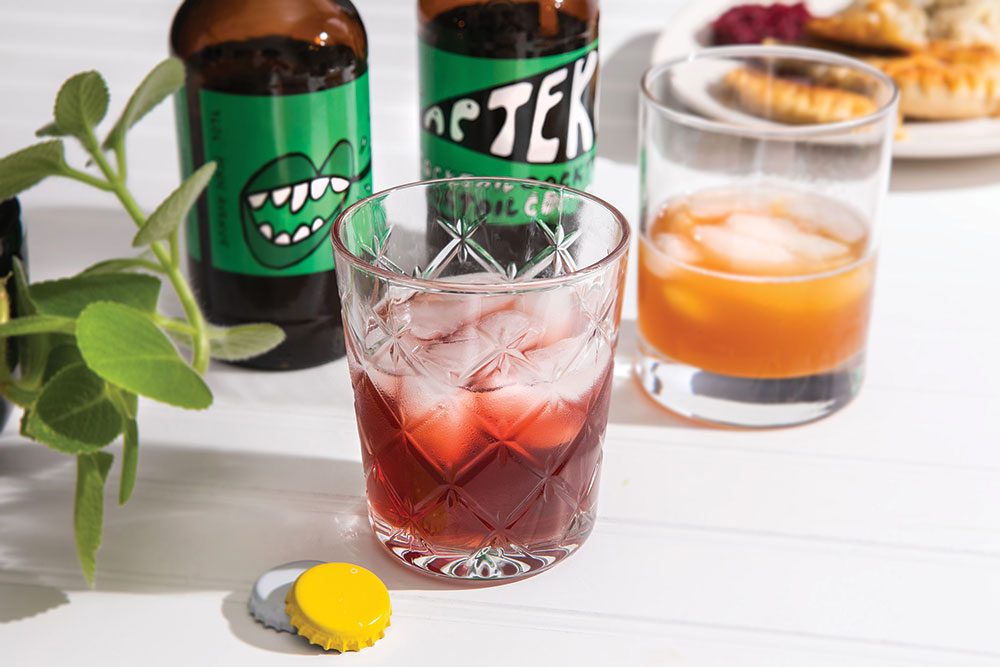 Finally, a combination of long-term fermentation and preservation projects coming to fruition alongside having time to experiment has allowed Lasky and Skowronski to begin building what I think is Pittsburgh’s most intriguing cocktail program. Here’s what I said about it in my September issue story celebrating my favorite dishes of the summer:

The duo might have hit a new peak with its streamlined beverage-to-go program, which captures foraged, fermented, juice cordials, tinctures and syrups into an almost entirely housemade beverage program that spurs summer sparkle. When I stopped by, they offered two bottled cocktails. Cocktail A is quince and cornelian cherry cordials, mint and nettle tinctures, Cynar and citric acid. Cocktail B is black currant cordial, spruce syrup, cedarberry and juniper tinctures and vermouth. Both are extraordinarily well-balanced, with just enough bitterness and herbaceousness to offer a full-throttle flavor experience. [Lasky and Skowronski since have added two more cocktails to the menu.] There are equally delightful options for those who don’t want to imbibe: Kompot musujący is a tart, bright, sparkling juice made from locally picked cherries and kwas chlebowy is a yeasty, malty drink fermented from the restaurant’s sourdough rye bread. Bonus: The brightly colored labels are a visual delight.

Lasky and Skowronski plan to continue to expand the housemade beverage program. However, dine-in service doesn’t appear to be on the horizon. When they do open again, Skowronski says it will be an evolution of the previous experience. “The Apteka we’re coming back to is that our approach is different. We’re in a place financially, but also emotionally, that we don’t want to grab everything that comes in front of us. We want to dial back the flow of the space.”