Stories of Our Neighbors: Why You Can’t Swing by Yourself 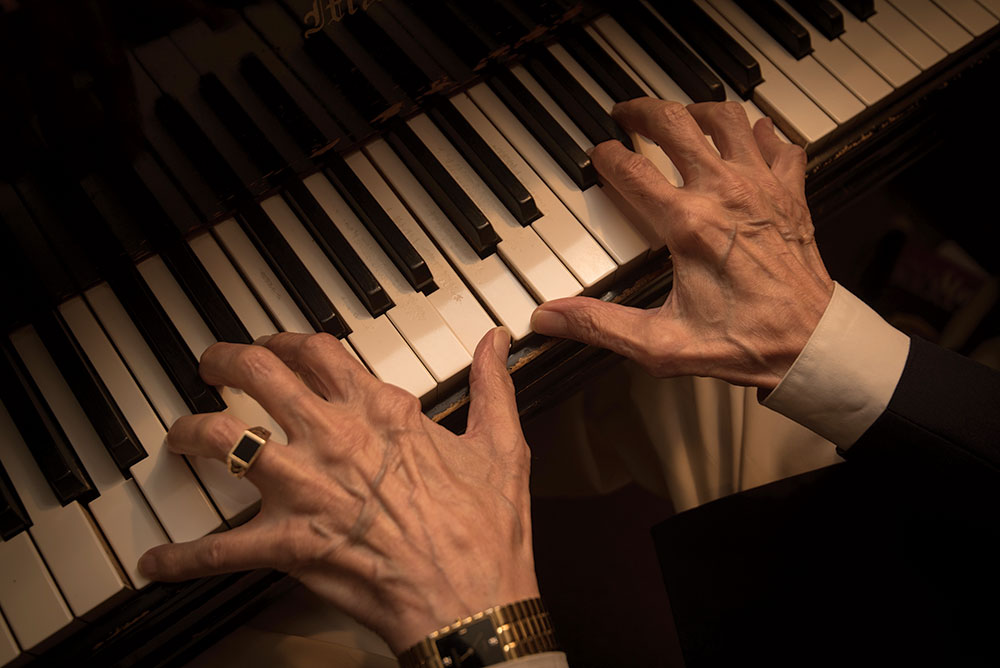 In the dimly lit basement of his Natrona Heights home, Frank Cunimondo, in his trademark Crocs and perfectly coiffed white hair, sits at his Mason & Hamlin piano.

The well-loved piano has accompanied Cunimondo to many jazz gigs over his 86 years. As he talks about life as one of Pittsburgh’s most acclaimed pianists and jazz teachers, Cunimondo interjects music when words fall short. He stops mid-sentence to play a riff, express a feeling, recapture a song central to whatever story he’s telling.

Cunimondo has a million stories, from his early days at Westinghouse High — his fellow alumni include Erroll Garner, Ahmad Jamal, Mary Lou Williams, and Billy Strayhorn — to tales of his most famous student: the actor Jeff Goldblum.

Tonight, Cunimondo lets me sit in on a lesson. His student is Sylvia Catello, 46, a petite pianist and singer with a lush waterfall voice. Catello works the kitchen at Girasole in Shadyside, where lucky late-night customers often get to hear her sing a song or two after her shift.

“She’s more Aretha than Aretha,” Cunimondo says, beaming at his student — who shyly beams back and says, “Now now, Frankie.”

“I never wanted to teach,” Cunimondo says. “All I wanted to do was play. My students made me a teacher. They gave me the heart of a teacher.” 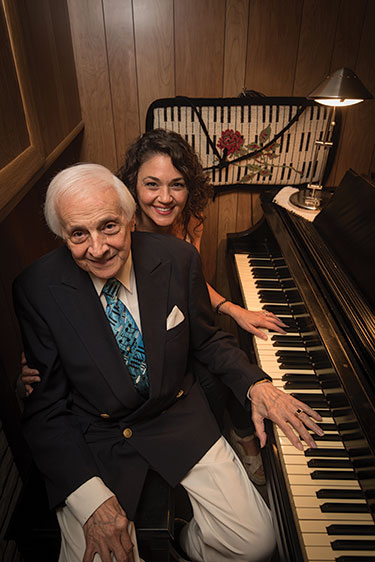 Before the 1960s, there was no such thing as a jazz piano teacher. There were big jazz artists. If you were lucky, they’d show you some things, but there was no system for teaching jazz. People thought jazz couldn’t be taught. It was too abstract — something felt, not learned. So I wrote my own method. I did it all by hand, before computers. The first jazz piano book ever written, to my knowledge.

In jazz, three things are necessary: harmony, theory and improvisation. First, you have to learn how to play. Hopefully, you’ll have a classical background and know where the keys are. Then with training, you learn harmonies and theory. In jazz, harmony means knowing your chord changes and how to apply them. Then you progress to re-harmonization, which is where you bring yourself to a song.

Improvisation is the hardest thing to teach. Some people have a knack for it. My best student, here, gets it. Sylvia has music in her soul. Some people come to me and don’t have music in their hearts. I can still be gentle with them. I can get them to sound pretty good. But you can’t teach a beautiful soul. You can teach other things, but not that.

Jazz is American music. It was created here and reflects the American spirit. But what’s happening now in America is not good. The world is not right. Music reflects that. A lot of jazz now is just people playing the wrong notes. There’s a difference between dissonance and trying to break something just to break it. There has to be some beauty in between the horrible.

I’m talking about jazz, but other things, too.

I’ve been playing piano since I was 5 years old. I studied with the same teacher until I was 18: Miss Palmieri, this little lady straight from Italy, an immigrant who came to this country with her mother. Miss Palmieri had jet-black hair pulled up into this tight bun. She sat stiff and straight and never smiled. She was very stern and I loved her very much. She always made you wash your hands before you played. It was like a ceremony, respect.

A lot of great musicians came from Miss Palmieri’s studio. We all went to Westinghouse, a powerhouse place for musicians. I was playing all the Pittsburgh jazz clubs by the time I was 13. I went to Canada at 17, then Atlantic City, then back home. At 19, I got the call to audition with The Billy May Orchestra. Big time! I got a telegram — “Get to Toledo by nine o’clock.” This was a day in March. I jumped on the first train. It was 75 degrees in Pittsburgh that day. When I hit Toledo, worst snowstorm ever. By the time I found a taxi, I got to the gig five minutes ahead of time. Somebody threw a jacket on me — everybody in orchestras wore matching jackets back then — and I jumped on the bandstand.

I traveled with them all over the world for a while. Then I came back to Pittsburgh, played the club circuit, moved to Florida [and] then finally to New York. Heaven! I was playing this club, The Absinthe House, across from Birdland. Lots of famous people would come in — Marilyn Monroe, Ava Gardner, Sinatra, The Rockettes. The piano there was terrible. It sounded like a tin toy. But I did my best.

Everybody’s got a New York story. I’ve got a million. Playing at that club is how I ended up on “Johnny Carson.” Some of Carson’s people came by, heard me play, and liked it. That helped me a lot, because Carson’s was the most famous program on TV at the time. From then on, I became the guy who was on “Johnny Carson.” I was pretty much in demand after that.

I went on to open my own club in Verona. Cunimondo’s Keyboards, a beautiful club. I lasted until 1990. I wish I still had that place. It was built for music. Very few places are built for music now.

Every century has its changes, some good, some not so good. Older musicians like myself — sometimes we don’t like it too much. It’s not the same as going into a nightclub, sitting down and playing a beautiful piano for beautiful people who are there to listen. Even in nice places now, people sit right next to the stage and holler and play with their phones. Used to be, people would come to hear the music, not themselves.

There’s some good, of course. With an electronic keyboard, I can play all these instruments. I can do things myself and mess around. But it’s not like being with other musicians. When you’re playing together, there’s a deep psychic connection. We look at one another and know what to do next. We make each other better.

You can’t swing by yourself.

Teaching is like that, too. I’ve had some famous students, like Jeff Goldblum. He was fantastic, great sense of humor, a class act even as a teenager. He was a very good student, so much talent, never negative about anything. I think he loved jazz most, but there’s no money in it. You can make a million dollars riding a jet ski in a movie or get 100 bucks for a gig if you’re lucky. He did good.

Another one of my students does music for Disney. Another trains actors who are supposed to be piano players but who don’t play piano. It’s a joy to see my students do well in the world.

I think it’s our purpose as humans to help each other. To share our talents, our light. Some days I feel like I don’t belong in this world anymore. But I’m still here. I’ll teach anyone who comes to me to learn.

This article appears in the Oct. 2021 issue of Pittsburgh Magazine.
Categories: Stories of Our Neighbors