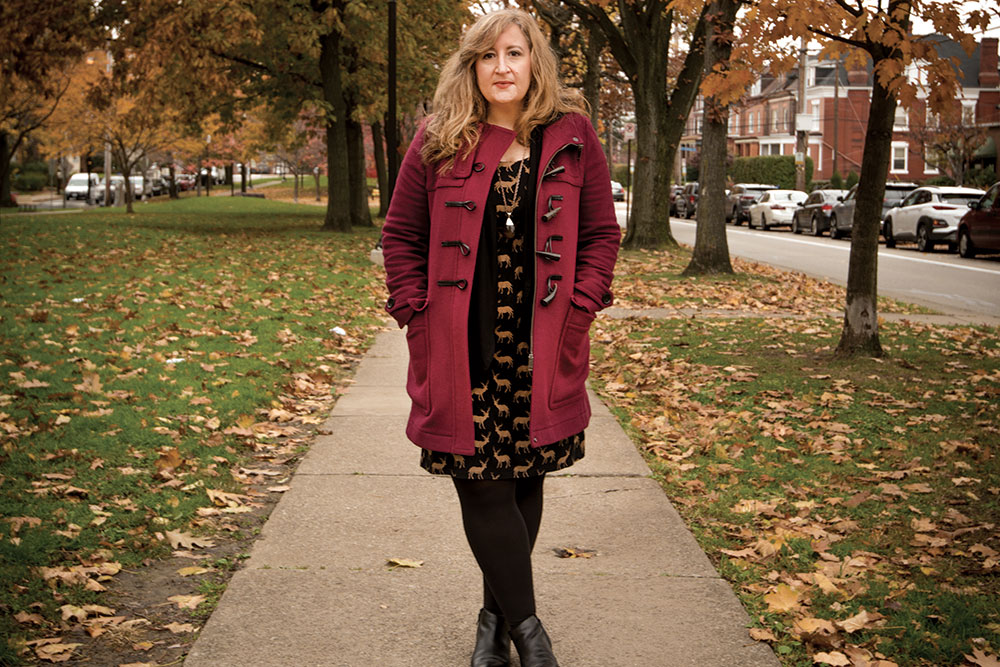 For Jessica Ghilani, today’s social-media universe — and the disinformation flourishing there — is passionately personal and very human.

“It hurts people,” says Ghilani, 41, an associate professor of communication and media studies at University of Pittsburgh at Greensburg.

“Disinformation,” Ghilani says, “plants this seed of fear in people’s minds, and it’s impossible to completely reverse it. It’s impossible to bring people back to the pre-version of themselves, the people they were before they heard this distorted or untrue thing that made them so afraid.”

Ghilani, who lives in Bloomfield with her husband, Chris Belasco, and their daughters, Emilia, 8, and Rosie, 5, is a media historian and media studies expert. Her research has been funded by The Smithsonian, the National Endowment for the Humanities and more.

Still, Ghilani is often as confused and distraught as anyone living in these strange times.

Disinformation got on my radar years ago, after Andrew Wakefield’s article was published in The Lancet medical journal. His article linked the measles-mumps-rubella vaccine with an autism diagnosis in children. He falsified that data. The Lancet retracted the article, and he’s been barred from practicing medicine in the UK. But it’s a great example of how misinformation and disinformation are able to thrive because they prey on people’s deepest fears.

My friend wants to have a family eventually. She’s been vaccinated, but she’s scared because people have said, “Oh, the vaccine makes people infertile; it makes them have miscarriages.” Which is playing off the seed of truth that some vaccines do mess with some women’s menstrual cycles. That doesn’t mean the vaccines make women infertile. It becomes so hard to convince people what’s true.

It’s become such a personal thing for me. It’s always been personal, maybe.

My aunt, who I loved dearly, fell down a YouTube rabbit hole about 10 years ago. It didn’t seem like a big deal at the time. She had been a homemaker. She had jobs but not a career. I think when she got into conspiracy theories, they made her feel like she had special information nobody else had. I think that’s why so many people are drawn to this. They feel like they have the real truth. And that’s very psychologically compelling for people who have had lives where they didn’t feel empowered otherwise.

I tried to gently engage my aunt. I loved her so much, and I didn’t want to make her feel bad about this thing that made her feel good. But then things became gravely serious. She was diagnosed with cancer and didn’t want to listen to her doctors.

When she underwent chemotherapy, she had these charlatans from YouTube telling her that the medicine is going to make you sicker. And, of course, she felt sicker because chemo makes you feel sicker. She wanted to crush up apricot kernels instead. She wanted CBD oil. She didn’t feel she could trust science. I think we lost her earlier than we should have because of disinformation.

I’m still grieving. I felt, still feel, like I didn’t do enough. Now I feel like my work against disinformation is the way I try to resolve or repair my grief.

I feel like sometimes people who have elite educations — and I went to all public schools, but still — can say about people who fall prey to disinformation, “Oh, these people are stupid. How do they get tricked like that?” But there are these incredibly media-savvy, charismatic charlatans that lie to people and terrify them and prey on their need to feel power in a world where they feel powerless.

Empathy is so important.

You can’t insult people into coming out of a trance.

Most days, it feels like a crisis. When I think about how I’m raising kids in these times, it’s surreal. Recently, Facebook was strategizing how to leverage playdates to develop an Instagram for children. I was horrified but not surprised. The kids are where the money is.

Billionaires brag about how their kids are screen-free. The people who have made their empires off these tools think they are dangerous for children. That tells us something.

My daughters are at the age where I can still get away with bubble-wrapping them against the world. No phone until you’re 30!

I’m trying to hold on to their childhood as long as I can.

Jessica Ghilani is a member of the University of Pittsburgh’s Disinformation Lab at the Institute for Cyber Law, Policy, and Security. For more information about the lab, which is designed to create a community-centered system for warning, understanding and responding to disinformation, visit: cyber.pitt.edu/disinformation

This article appears in the January 2022 issue of Pittsburgh Magazine.
Categories: Stories of Our Neighbors