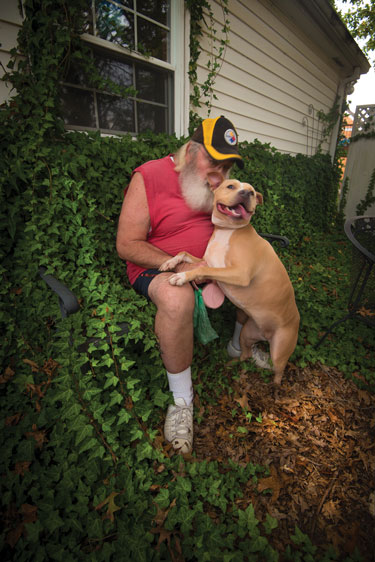 “People at my readings sometimes say, ‘I don’t like poetry, but I like what you’re doing out there.’ I love that,” Solarczyk, 66, says. “I want to draw people in, like a preacher. I think of poets as missionaries of the word.”

Solarczyk, his wild gray beard reminiscent of that other poet-missionary, Walt Whitman, has been preaching poetry since he discovered the underground presses of the 1980s. The author of 11 collections — most recently “Titled World,” released in 2020, and this year’s “Classic Chapbooks” — grew up on the South Side and now lives in Ross with his cat and dog and memories of his wife, Tami Laroche, the inspiration for much of his work.

Laroche died at the beginning of the coronavirus pandemic. Shortly before her death, Solarczyk wrote a poem, “Carried Where We Go” — reprinted on the opposite page — dedicated to a barista at The Coffee Buddha in Ross, a now-defunct coffeehouse where Solarczyk often gave readings.

“Sometimes you’re writing something you think is for someone else, and really you’re writing it for yourself,” he says. “I didn’t know Tami was leaving. Now this poem feels like a prayer. It’s one of the few poems of mine I return to for comfort.”

People get turned off early by poetry. They think it’s all fancy language. But poetry speaks to all of us.

I went to Catholic school. My mother encouraged reading. We had the Golden Treasury, the World Book of Knowledge, lots of nursery rhymes. The music of those rhymes was the first thing that drew me in.

Crows recognize faces. They don’t forget. Sometimes I carry on conversations with them. I try to stay on their good side.

Later came Emily Dickinson, Whitman, Longfellow. We had to recite “Paul Revere’s Ride.” I loved that. Later, it was Bob Dylan and Neil Young. Their lyrics felt almost spiritual.

We had this teacher, a nun, a gargoyle. She frightened me so badly. One summer, I prayed for something to happen to her. But, on the first day of eighth grade, there she was. She instilled the fear of God into us.

One day I got into trouble in shop class. Two friends and I got into a paint fight, and we were kicked out of school. Our punishment was spending time with this nun. She’d examine our work to make sure we didn’t cheat. It was terrifying. Then one day I noticed she started to smile. She pulled me aside and said, ‘I’d like you to read some of your poetry to your classmates.’

My poems were funny, sarcastic. Everything rhymed. I read this poem about another teacher. It was pretty brutal. And my classmates were rolling and laughing. And she let me go on! I remember feeling I wanted to do that forever.

Around 1979, everything clicked. I learned about the small-press scene. In Pittsburgh, there was this guy named Larry Evans who ran a zine called The Mill Hunk Herald. I saw it on a newsstand in Bellevue. I started submitting my work there.

I first became aware that Pittsburgh was a working-class-writer town at a bar called Wobblie Joe’s. Working-class poets! There were people like me being published. There were people reading their poems. To this day, my favorite readings occur in bars. You can really reach people. I miss that, being with people.

The pandemic has been hard. My wife, Tami, died. Many of my poems were for her, about her. It’s been over 17 months now. She had symptoms that could have been COVID-19. They were discouraging people from going to the emergency room back then. And Tami said, ‘I just want to go upstairs and go to sleep.’ I could hear snoring. She had a hard time sleeping and so when she fell asleep, it was best not to wake her.

I felt good, hearing her snore. In the morning, she woke up right after me. She said, ‘I feel weird. I feel scared. Help me to the bathroom.’ I helped her because she couldn’t get out of bed. When she tried to walk, she bumped into walls. In the bathroom, she washed up. I said, ‘Let me take you back to bed. I’m going to call your doctor.’ And then she collapsed.

Our daughter had gone to work. Her boyfriend was still here. He started CPR. We called 911. They showed up and worked on Tami. They got a brief pulse but said, ‘It’s not looking real good.’ And then she was gone.

They wrote her death off as some sort of heart problem. There was no ceremony, nothing, nothing.

I had her cremated, her wishes.

Other than Tami’s obituary, I didn’t write anything for three months. Then I started writing again. Maybe it was how I was raised, maybe Catholicism had some sort of impact. Growing up, I didn’t see Catholicism as optimistic. But there’s something in this world, and beyond maybe. I thought I was ready to throw it all away. But now I feel like there are still things to be done. I know my time here is limited. All our time is. So what are we going to do with it, even so?

Carried Where We Go

wisdom comes with age
if we keep the door ajar

but hearts bind in the dark
love follows light

friends are folks we didn’t know
who arrive unexpected

& never leave
carried where we go.

Categories: Stories of Our Neighbors

Stories of Our Neighbors: Thank You For Being a Friend