Stories of Our Neighbors: ‘I Need So Much Less Than I Did Before’

Singer/songwriter Emily Rodgers is emerging from the pandemic with a new album and a new sense of herself. 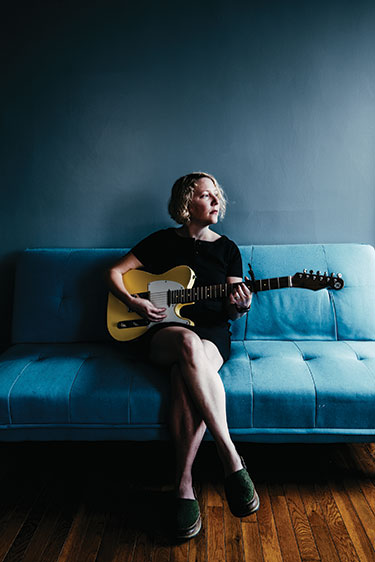 When Emily Rodgers talks about her house in Bellevue, where she lives with six rescue cats, a gentle pit bull named Mogwai, and her husband, Erik Cirelli, who is also her bandmate and an acclaimed guitarist, she talks about it like a second body.

“My pandemic has been weirdly fine. To be honest, my life is not that different than it was before, which I’m realizing is concerning after the fact,” Rodgers, 40, says, laughing. “Given a choice, I always want to be home. That’s how sensitivity plays out for me. There are days where I just cannot leave the house. Some days leaving home is like walking around with no skin.”

Rodgers’ new album, “I Will Be Gone,” was recorded in just six days in — where else? — her attic. “I Will Be Gone” is a collaboration between Rodgers, Cirelli and legendary indie producer Kramer, whose revived Shimmy-Disc label released the album April 16. Thematically focused on the loss 15 years ago of Rodgers’ brother Dan, who developed schizophrenia and died by suicide, the album is Rodgers’ most personal project to date.

“It feels vulnerable to be so vulnerable,” Rodgers says.

We talked over Zoom about sensitivity, the myth of the tragic artist, and how the pandemic has helped humans help one another.

I was always in love with the idea of being a tortured artist, not necessarily a musician, just an artist. I bought the myth of the tragic-artist archetype. It’s how it’s presented maybe — you have to be miserable in order to make good art. For a long time, that was what I aspired to. It’s different now. But I’m still a work in progress.

There’s something to be said for the idea that people who make great art are sensitive. And it’s hard to go through life as a sensitive person. But when you get down to it, when you start feeling like an excessive use of alcohol is somehow helping you be a better artist, that’s where the reality sets in. Take John Berryman. In the end, he couldn’t write. Hemingway couldn’t write at the end. No one likes to talk about that part.

I don’t think I’ve had one light-bulb moment, but I know I’m tired of being tragic. And practically speaking, habits that are going to kill you won’t make you productive. When I was drinking, I would drink to make art — but in reality, I didn’t do anything when I was drinking except drink. I think there’s truth in the idea that those who have suffered make the best art, but what’s different in my thinking now is that no one needs to actively suffer to make art. In fact, it’s almost impossible to write when you’re suffering.

I’m not the kind of person to ask for help, but sometimes, like with this record, you have to give over. For this album, I was really stuck musically. I felt I was writing the same thing over and over. And then Kramer was coming to Pittsburgh and expected us to make a record and we were forced to do the thing so fast. I was forced to ask for help. I don’t think I would have otherwise.

But Kramer said, “I believe in us.” Erik said, “We can figure this out.” I didn’t believe them, but we did it anyway. We figured it out together, the three of us, as we were recording it, no rehearsals. It was pretty terrifying, the vulnerability of that.

I’m really bad in terms of perfectionism. In a situation like the one we were in, you cannot be a perfectionist, because you’re desperate. And that was actually a pretty good setup for me. Desperation is a good motivator, a great teacher. Kramer would say, “OK that’s good. Done. Let’s do the next one.” I had to learn to trust that.

I hope maybe my music helps people, though that’s not why I do it. I make music because I have to, for me. I have no illusions that my music will change the world. But I do want to help people. I’m a therapist now. I graduate from school in May.

One upside to the pandemic is some insurance companies have been waiving their co-pays for therapy. Before, with insurance, my co-pays were $60, and sometimes it felt like I and so many people who wanted to get better couldn’t afford to get better.

When I first started writing, I thought only about my actual feelings and I tried to find some kind of language there. I know exactly what I mean in my songs and what I mean is very explicit, but I often don’t let anybody else in. I think when people are moved by my performances, they tap into this sense that I’m emoting rather than singing words, that there’s something happening under the surface. I’m singing the words I’m not singing, if that makes sense.

This album is more vulnerable, which I’m not good at. I seem very vulnerable, but I try hard to be invulnerable. It’s pretend.

Because of the intense sensitivity I experience, I really started isolating, even before the pandemic. I feel like I’ve been cocooned in this house for years. But through the pandemic, all this virtual hanging out with people, I think it’s been good in ways. It’s helping me re-enter the world.

A few weeks ago, Erik and I drove through Oakland. We went to the art museum, which was great. We hadn’t been out of the house — I don’t remember the last time. As we were driving through Oakland, I remembered before, every single time I’d drive through there, I could barely breathe. I’d be shaking with panic and anxiety. … And then we were driving through this last time and I thought, this is so cool. Look at all the things we have here. All this life.

My anxiety now is just not as bad as it has always been, and I have better tools to manage my sensitivity. So that makes me excited to re-enter the world along with everyone else. I think maybe nobody will notice how long I’ve been gone. They’ll just think that, like everyone else, I’ve only been gone a year.

In one track from the album, “Down,” Rodgers writes what could be an anthem for post-pandemic times: “I’ve been thinking of you / I’ve been holding my breath / I need less, so much less / than I did before.”

You can preview and order “I Will Be Gone” on Bandcamp.

This article appears in the May 2021 issue of Pittsburgh Magazine.
Categories: Stories of Our Neighbors