Stories of our Neighbors: Home is Where the Hare Is

Rebecca Jung talks rabbit wrangling, being a third-culture kid, and finding her forever home in Pittsburgh. 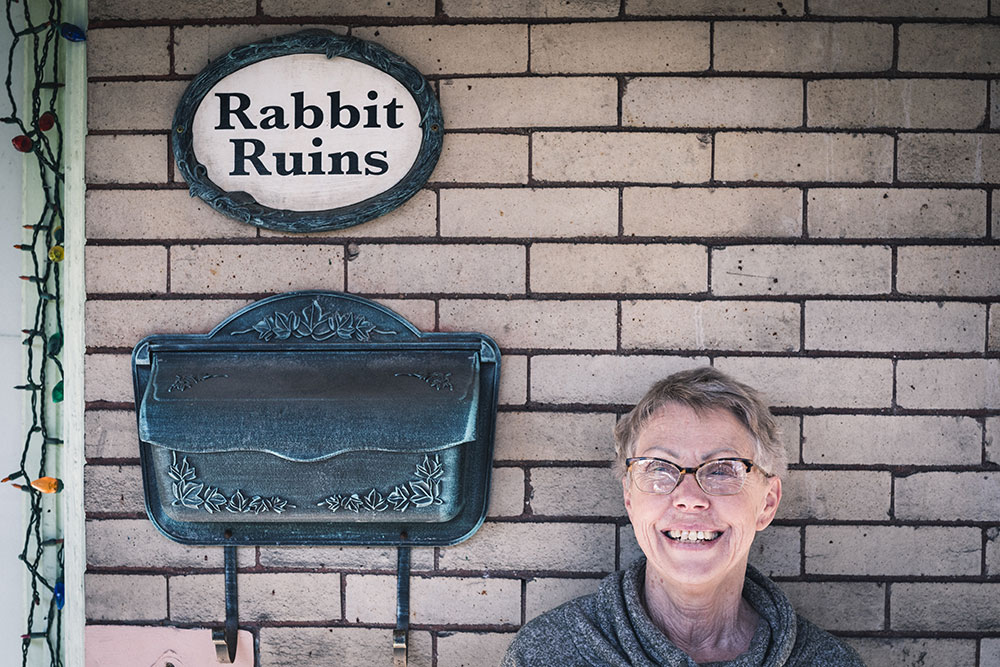 Rebecca Jung’s house in Highland Park boasts a sign on the porch: Rabbit Ruins. While her Victorian home is lovely, the rabbits she fosters and adopts through Rabbit Wranglers — a specialized rabbit-rescue operation based in Pittsburgh since 2002 — do have the run of the place.

“People think rabbits are sweet and cuddly, but they are big personalities,” Jung, 69, says. “They’re the bosses, and they let you know it.”

Jung is a tiny woman, around 5 foot 2, with a short, blond pixie cut and a firework laugh that makes her seem much larger. She and the 75 other Rabbit Wranglers volunteer their time to rescuing domestic rabbits from abuse, neglect and abandonment.

“I know what it’s like,” Jung says about her devotion to animals that, to others, may seem small and insignificant. “It’s important to stand up for the helpless.” 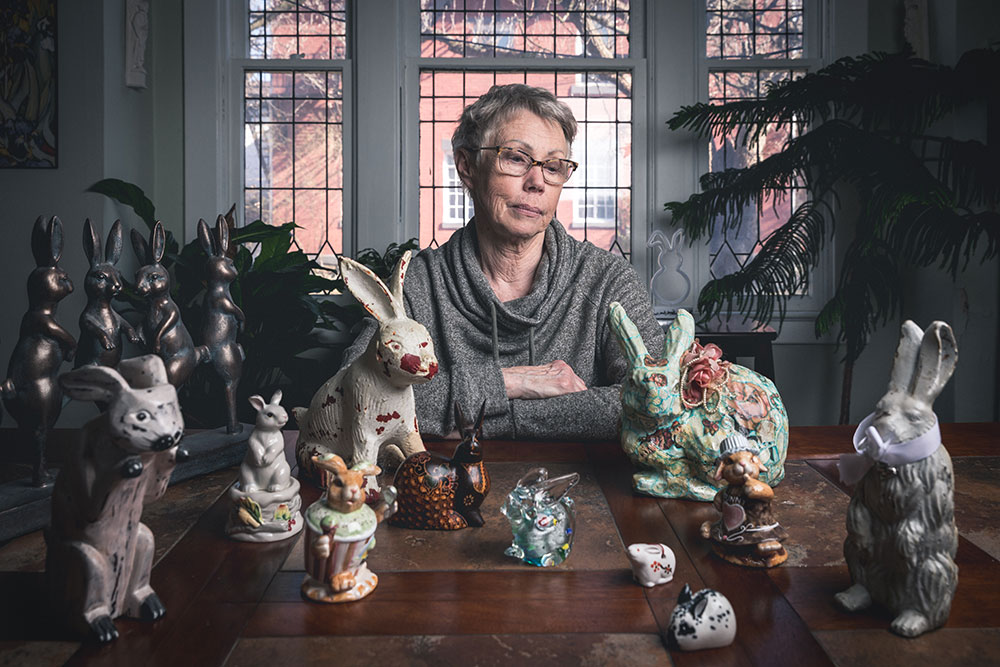 My father was a sales rep for Goodyear. We went wherever his job took us and we left whenever we needed to leave.

I came to the Pittsburgh area when I was in my 30s. My dad had just bought his own company and I came to work for him.

We were in Scottdale and everyone there was family oriented. If you’re from out of town in a place like that, it’s hard to find your place and so I read a lot. One day, I was reading “Watership Down.” My dad was cutting the grass and uncovered a nest of baby bunnies. The mother wasn’t anywhere around. I took them in. It was like, I have something in my life now. I did everything I was supposed to do. But with wild bunnies — there’s a high death rate there. They died off, one by one.

After that, I went out and got a domestic rabbit. And I was hooked. At one point, I had eight rabbits. I didn’t own all of them. I foster a lot.

As far as children being abused, or people who can’t speak for themselves, that’s what rabbits are like. They’re small. They don’t make a lot of noise. You think they’re not going to do anything, just stick them in a cage. But they’re not like that at all. They don’t put up with much. They fight back. I respect that.

Before Rabbit Wranglers, I volunteered at an animal rescue. A bunch of us volunteered to run a program for rabbits. We vetted all adoptions, made sure the rabbits were safe and cared for. Once a week, we took turns to be with the rabbits, let them out of their cages, get them to trust people.

There was one woman — not a bunny volunteer, not well liked. She’d say things like, “Oh, we have too many dogs. We’re going to have to euthanize them.”

One day it was my turn to look after the bunnies. This woman came in. She was big. She grabbed one of the bunnies and said, “This one’s going to a pet store.”  And I stood up and said, “Oh, shit,” and she yelled, “Blasphemy,” or something like that. She was yelling so much it shocked me. She said, “You’re fired.” I said, “I’m a volunteer.” She got in my face. I pushed her back. She yelled, “Assault!” She dropped the bunny and said, “I’m calling the police.”

She got on the phone and I thought, well, in for a penny in for a pound. I ripped the phone off the wall. I had to leap to slap her face. She yelled “Assault!” again and then there were all these people around. They went to town on me. They took my shoe and beat me with it. The woman bit me, but to be fair, I tried to bite her first.

Flash forward — she quit. I was banned for life from the rescue.

It’s important to stand up for the helpless.

I joined Rabbit Wranglers after that. We take in the neediest rabbits, the ones slated for euthanasia. We take in rabbits from rescues, rabbits who have behavioral problems. Special-needs rabbits. Or old rabbits people don’t want to take care of anymore.

Usually we work in the tri-state area, but we’ve gone farther. Recently we went to Texas, where there was a case — over 100 rabbits, a hoarding situation, all of them sick. So we went and got some of those rabbits and brought them to Pittsburgh and got them the care they needed. We foster all our rescues until we find them good homes. 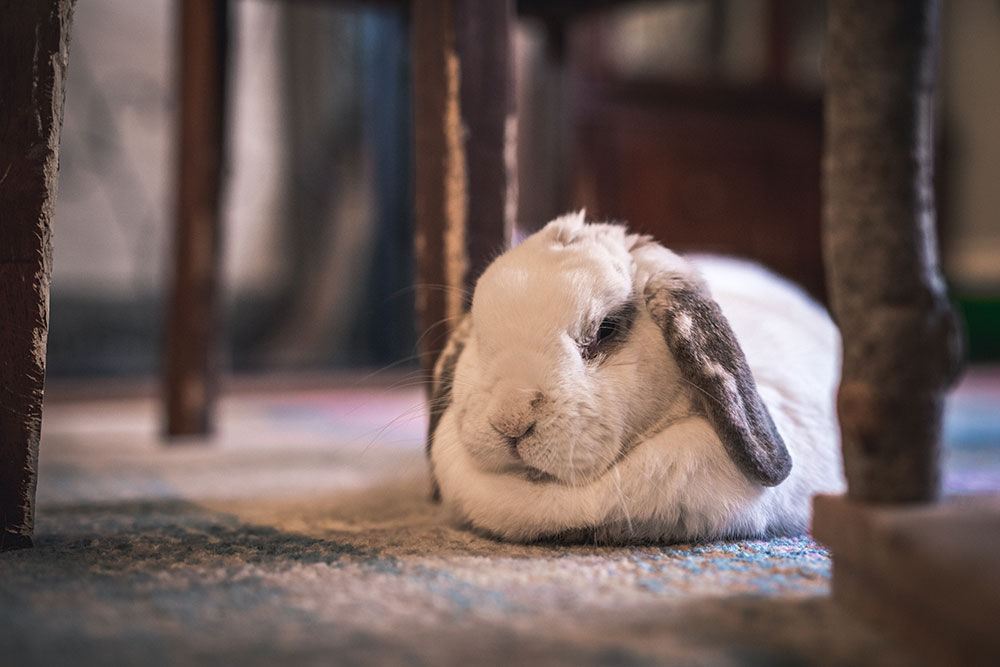 One of my favorite rabbits I’ve fostered was Karma. I adored her and she was a maniac.

They found her in the parking lot of the Washington Animal Rescue. It was winter, cold, and she was stuck in a little plastic bag. Somebody dropped her there. You had to wear leather gloves to get anywhere near her. She was my first troubled rabbit. She would wait for anyone to come close. Oh, she’s so cute! And then she’d jump and sink her teeth in. She was so angry. She would spin around looking for something or someone to bite.

I said, Oh, I know how that feels. It’s crippling, that kind of anger.

As a child, I was always angry. Not so much anymore. Writing helps. Rabbits help. But growing up, I was always furious and scared and angry and alone and there wasn’t anything I could do about it. As children, we’re helpless, powerless.

When I saw Karma, I thought, I get it, and so we worked with each other. It took a long time. But then she trusted me, and I trusted her. I had her for a long time, but not long enough.

I love them all, of course. I always learn something from the rabbits. I say they’re my Buddhas.

Sometimes people think, why care so much about something so small? As far as smallness goes, as far as love goes, there’s no limit. There’s no size limit on love. There are no boundaries to love. We need all the love we can get in this life.

For more information about Rabbit Wranglers, visit them on Facebook.

This article appears in the April 2021 issue of Pittsburgh Magazine.
Categories: Stories of Our Neighbors