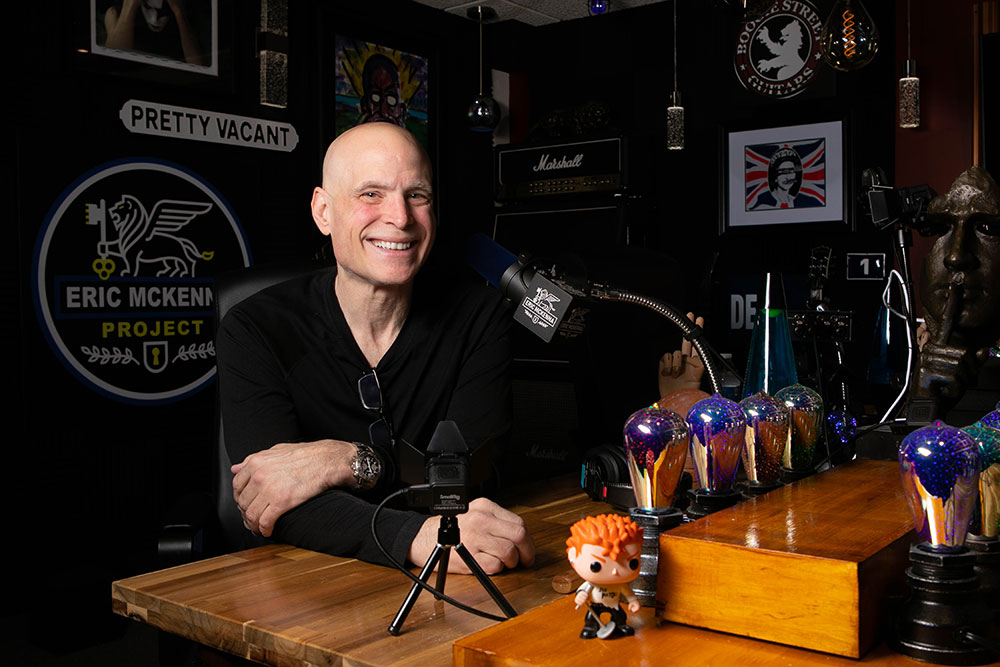 If Eric McKenna’s brain were an art exhibit, it would probably look a lot like his Moon studio — guitars on walls (next to a traffic light), a picture of Queen Elizabeth near a Sex Pistols sign that reads “Pretty Vacant,” and lightbulbs everywhere.

So many lightbulbs. Every size, shape and color, dangling from the ceiling and lining the table where McKenna hosts his Boogie Street Studio guests.

The studio reflects the spirit of the “Eric McKenna Project” podcast, a weird and joyful place designed for deep-dive conversations with no agendas, no corporate sponsors and (ideally) no politics.

“I like to say the project is anti-sound bite,” says McKenna, nearing his 80th month of long-form podcasting. “I’m not here to change anyone’s mind, because I don’t have the answers. What I do is connect people. I hope that does some good in the world.” 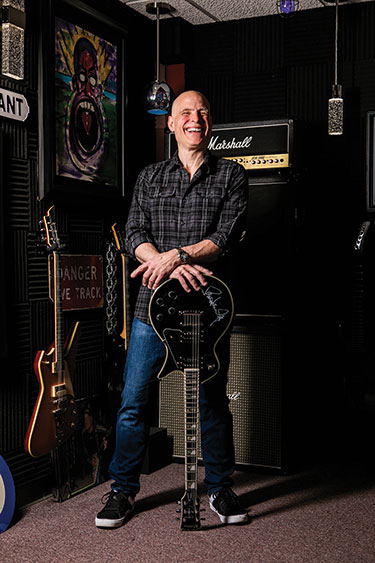 McKenna, who lives with his family in his native Coraopolis, founded another passion project — Boogie Street Guitars — in 1999, creating custom guitars for some of the world’s (and his own) rock idols.

Recently I had photographer Duane Michals on the show. He’s around 90 now, a real card. He said, “So what is this? A cult?” I said, “Everybody who entered here has left.” He said, “Probably with good reason.”

This space is me. It’s a reflection of my Boogie Street Guitars years. If you have [obsessive- compulsive disorder], it might not be the place for you, but I feel comfortable here. I’m not a huge socializer. I’m not wired for mingling. This thing, though, this life and the people I’ve met through it — what a gift.

I started playing guitar after I lost my brother in 1996. That led into buying guitars, then not liking them and having to get rid of them. I realized there was a commerce aspect to this thing I loved.

I quit corporate America in 1999 to start Boogie Street. That lasted until 2014, one wild ride. I got to design guitars with some of my childhood heroes — Paul Stanley of KISS being the biggest one.

My childhood was very Catholic. KISS albums were forbidden. Friends weren’t allowed to bring them into my house. “Knights In Service of Satan” and all that.

Flash forward, 2006. I signed a purchase contract with Washburn Guitars, in conjunction with Paul Stanley, to commission Boogie Street Paul Stanley custom guitars. It was a couple hundred thousand dollars. So I called my dad.

I said, “Do you remember when you tore down my KISS posters? You said, ‘These a**holes are never going to help you get a job.’ Remember?”

He said, “I vaguely remember doing something like that.”

I said, “Well, I just signed with Paul Stanley of KISS. He’s really helping my career.”

What are the odds?

I lost my brother, Brian, in 1996 to narcotics. It seemed impossible. My brother was larger-than-life, very gregarious. My parents and I chalked up his behavior to Brian being Brian. Then he moved to Tampa and died in his sleep.

My brother was a poet. He would say that’s nonsense, but he was so wise. He’d say, “Eric, don’t get above yourself.” Metaphysical, maybe.

He meant not to be above anybody, not to elevate yourself. It’s been important for me to learn that. Pay attention, because someone around you might be trying to achieve something and could really use your help.

Humility, at the center of everything. I have to work at it. My brother’s spirit reminds me.

I’m a realtor in my day job, and I enjoy it, but I realized a few years back that nearly all of my conversations were superficial, the ins-and-outs of the housing market. I started searching for deeper conversations, deeper connections. And I started listening to podcasts. I was stunned there were other people like me yearning for conversations that lasted hours.

If you’re going to tell me the Democratic line or the Republican line, I’m not interested. This is a selfish show. I have no interest in politicians. I have no interest in the commercial value of the podcast. I want to learn from other people — their philosophies, what they love, what they experience. I want us to find common ground and come together through our common humanity.

At the podcast level, that’s what I’m trying to do — learn.

I think about my brother a lot.

We are all so polarized now. Before 1996, when technology really took over, people used to try to live in the middle of things. Getting yelled at by your parents, working on a math problem, or watching TV. Those things took time. We didn’t have to make instant decisions. We had time to think. We had time for complexity.

One of my dearest friends, Jim Stuart, said about the podcast, “What you’re doing is attempting to slow everything down.”

Take away the phones. Give people a chance to respond to what they’re hearing. Because these days we’re triggered to respond through technology quickly and probably not very wisely. On the podcast, we’re just slowing the world down a little bit.

I feel like American culture is sick. I think it’s sick because our priorities are not laced in kindness. But maybe in some small way, the little things — real talk, let’s slow it down, let’s be in a room together and not hurt each other for a while — might move us toward change a little.

I still believe in that. I refuse not to.

For more about the Eric McKenna Project and to listen to the podcast, visit: ericmckenna.com/emp-podcast

Lori Jakiela has a new poetry collection, “How Do You Like it Now, Gentlemen?” and has written several other books. She lives in Trafford and directs the Creative and Professional Writing Program at Pitt-Greensburg. For more, visit: lorijakiela.net

This article appears in the August 2022 issue of Pittsburgh Magazine.
Categories: Stories of Our Neighbors