Our book editor catches up on some great new reads with local connections. 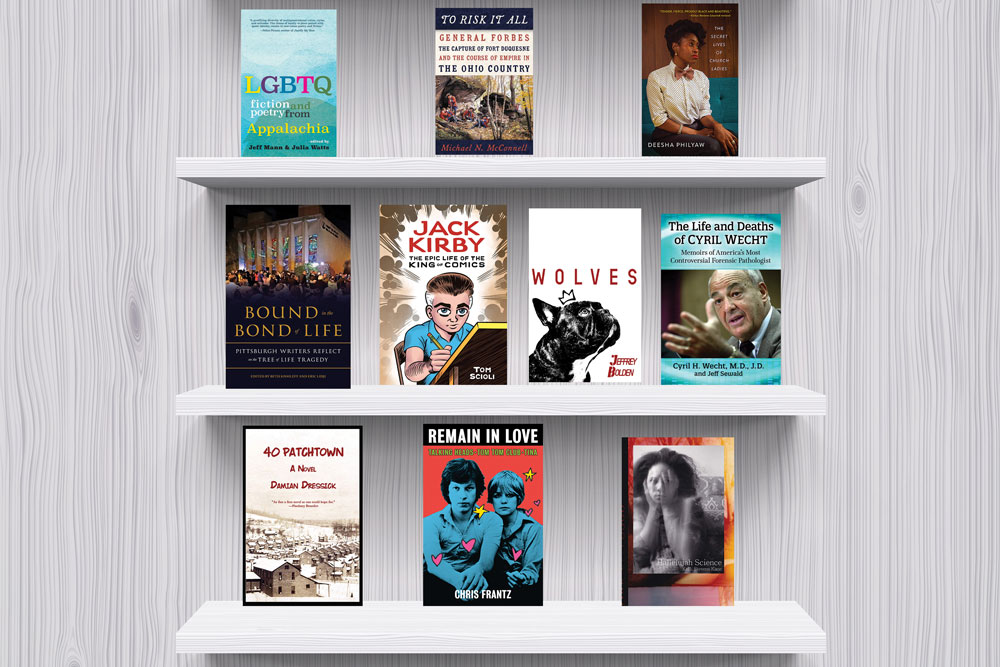 It feels like everyone is talking about Deesha Philyaw’s debut short story collection — and with good reason. The book is racking up award nominations like crazy. Philyaw is a finalist this year for the National Book Award and the L.A. Times Prize; she’s the winner of the PEN/Faulkner Award and the prestigious Story Prize. Her fiction is sharp, funny, sexy and heartbreaking, sometimes all at once. The character Caroletta sums up what Philyaw’s work is about: “[A]ll those women at church who think they have to choose between pleasing God and something so basic, so human as being held and known in the most intimate way.” With her first book of fiction, Philyaw has joined that rarefied club of Annie Dillard, John Edgar Wideman and Michael Chabon as a Pittsburgh writer of the very highest rank. If you haven’t read it yet, drop everything you’re doing and get a copy now.

Longtime Pittsburghers will likely have an opinion about the controversial former Allegheny County Coroner Cyril Wecht. Love him or hate him, you have to admit that he is one of those local characters that adds something a little extra to our Pittsburgh mise-en-scène. The author of more than a dozen books, including investigations of the JFK assassination and the murder of JonBenét Ramsey, Wecht turns the scalpel on himself in this illuminating autobiography. The book sheds light on Wecht’s formative years in the Lower Hill District, as well as his personal travails with local politics and national celebrity. Considerable ink is given to the charge of federal public corruption brought against him in 2008, which was eventually dismissed. Wecht also includes a compendium of his professional opinions concerning many high profile deaths. Even the infamous alien autopsy video broadcast by Fox in 1995 gets an airing.

“No matter where I am, / I’m in the middle of something, // in the middle / of something / lost.” These brief stanzas from Kelli Stevens Kane’s debut full-length poetry collection act as something of a refrain centering the reader amidst all the joyous-sad music contained in this volume. Kane, an August Wilson Center Fellow and a recipient of Advancing Black Arts in Pittsburgh grants from The Pittsburgh Foundation, can be silly one moment — “Too many people bother me. / I ought to cook them in soup.” — and nakedly honest the next — “if I had a child now / I’d wish I didn’t”. The inner workings of the poet’s mind and body, fevers, menstruation, confusion and rue sing across these pages. “Turning bad apples / into baked apples” is this poet’s work. The ice cream on top is a hard-won sweetness. Of that, Kane writes, “I love anything / brave enough to melt.”

The drummer Chris Frantz was the catalyst for the band that would become a legend, teaming up with his wife (then his girlfriend) Tina Weymouth, a novice on bass, and pal David Byrne on guitar and vocals. It was 1974; the three were studying art at the Rhode Island School of Design. That band, originally called The Artistics, didn’t make it very far. Fast forward to 1975, when the trio, now transplanted to New York City, decided to give it another go. This time, they would call themselves Talking Heads. Born in Kentucky, Frantz and his family moved to Pittsburgh, where eventually he would attend Shady Side Academy. He fondly recalls his first  “little red plastic transistor radio that I would tune into rock and roll stations, like KQV, and the R&B station, WAMO.” Frantz paints a vivid portrait of the birth of punk rock, his relationship with Weymouth and the acrimonious break-up of Talking Heads in 1991.

Bound in the Bond of Life: Pittsburgh Writers Reflect on the Tree of Life Tragedy
edited by Beth Kissileff and Eric Lidji
University of Pittsburgh Press, $25

“The attack at the Tree of Life synagogue building on October 27, 2018, created more death than any Jewish community in America has ever faced at one time,” writes Eric Lidji in his introduction to this meditative collection of essays which reflects on the tragic events of that day in Squirrel Hill — and the aftershocks felt by Pittsburgh. For this anthology, the editors “selected writers who were entangled in the aftermath through their professional or personal obligations.” Journalists, religious studies scholars, memoirists and poets all contribute nuanced and thought-provoking essays, each offering a unique perspective on what happened that day and why it happened here. As Post-Gazette columnist Tony Norman ruefully reflects, “Anyone who actually lives in this town knows that Pittsburgh is more than familiar with the kind of hatred expressed by the gunman. The violence he used to actualize that hatred is not unprecedented in this town. It was bred here.”

Historical fiction often suffers from a romantic sense of nostalgia for times gone by. Damian Dressick’s debut novel is an entirely different beast. Based on the 1922 miner strike at the Berwind-White Coal Co. in Windber (just south of Johnstown in Somerset County), the book incorporates many firsthand accounts from miners — including a recollection from the author’s grandfather. Dressick’s book is a visceral tale of the harsh conditions and violence experienced by the miners. Told by 14-year-old Chester Pistakowski, a Polish immigrant, the struggles of a company town caught between Pinkertons and union organizers come vividly to life. Like Chester, who admits to himself that “I ain’t such a fool as not to be able to see that this patchtown life twists things till they ain’t got no shape at all, but knowing it in my head ain’t the same thing as being able to let it go,” the reader won’t easily walk away from this book unscathed.

Jack Kirby: The Epic Life of the King of Comics
by Tom Scioli
Ten Speed Press, $28.99

Local cartoonist Tom Scioli’s work has always shown his affinity with the art of comic-book legend Jack Kirby. The Eisner Award-nominated Scioli’s work on comics such as Godland and The Myth of 8-Opus evokes the energetic dynamism of Kirby’s uniquely visceral style. So it’s no surprise that Scioli would turn his pencil to writing and illustrating a full-length biography of his hero. This book fondly recalls the golden age of comics in every panel. Scioli doesn’t pull any punches, though, when it comes to Kirby’s experiences serving in World War II, or in the trenches of Marvel and DC comics — where he had a hand in creating characters such as Captain America, Black Panther and Silver Surfer. Be sure to check out the recently published Fantastic Four: Grand Design (Marvel, $29.99) for another masterful team-up between Scioli and Kirby.

Jeffrey “Boosie” Bolden died in June of last year near his mother’s home in Mississippi. While out walking, the young writer was struck by a drunk driver. His passing reverberated around the country, for Bolden had lived a peripatetic life; the impact of his loss was felt from Mississippi to Tennessee to Compton. Bolden earned his Master of Fine Arts degree at Chatham University and was deeply loved as a person, and respected as a writer, in the Pittsburgh literary community where he found a home. His memoir is the story of how Bolden discovered his voice as a writer and pursued his dream to become “Poetry’s wolf child”. Beautifully written, tender and hard in all the right places, the book can be as gritty as a crime drama and then turn on a dime to become an otherworldly work of magical realism. Bolden the “Rapper, Performer. Dreamer, Poet, Inspiration” comes through clearly on every page. “Wolves” stands as a testament to this remarkable writer’s talent and heart.

To Risk It All: General Forbes, the Capture of Fort Duquesne, and the Course of Empire in the Ohio Country
by Michael N. McConnell
University of Pittsburgh Press, $35

General John Forbes’ campaign against Fort Duquesne is often reduced to a footnote in the history of the Seven Years’ War, a conflict between Great Britain and France that began in 1754. That European conflict quickly spilled into the French and British holdings in North America. “The war that brought Colonel John Forbes to Halifax in mid-1757 was already three years old,” writes McConnell. “It began in the volatile Ohio Country where Virginia land speculators collided with local natives and the French. At issue was ownership of the upper Ohio Valley and, specifically, the Forks of the Ohio.” This clash would not only have long-reaching consequences for what would become Western Pennsylvania and Pittsburgh but also for the nation as a whole. McConnell’s lively and meticulously researched account should please both history buffs and readers with a general interest in how our region came to be.

“LGBTQ Appalachian writing nearly always concerns the ways that sexuality, gender identity, place, and family converge, interweave, and complicate one another,” write the editors of this timely anthology. Too often, Appalachia, a cultural region that stretches from New York State down into Alabama and Georgia, has been presented in the media as a monolith. Pennsylvania makes up most of the northern edge of this region. This thoughtful collection of poetry and fiction works to complicate our understanding of Appalachia, revealing a much more diverse community. Julia Watts notes in her introduction that “(a)s a young adult, I read Appalachian literature and what was then called gay and lesbian literature, but the two identities never overlapped in the same work.” Here writers as varied as Dorothy Allison, Aaron Smith, and Nickole Brown offer a complex and nuanced look into the lives of contemporary Appalachians.

This article appears in the June 2021 issue of Pittsburgh Magazine.
Categories: Arts & Entertainment