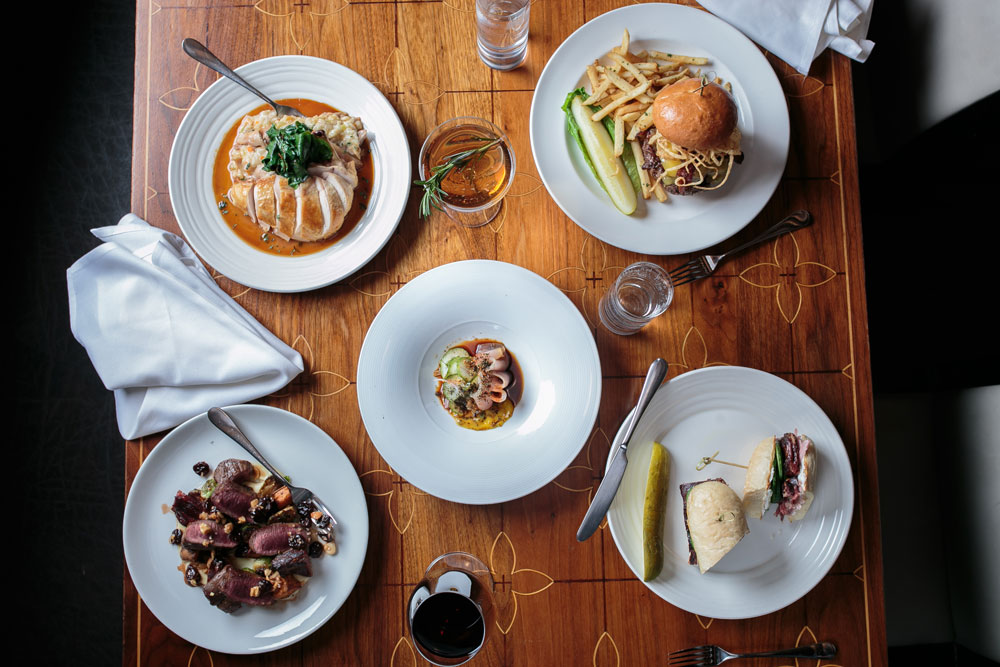 There is a chicken dish on the menu at Eleven Contemporary Kitchen that has existed in some form since the restaurant opened in 2004. The basic idea of the plate is this: a roasted, partially deboned chicken breast is served alongside risotto studded with dark meat, a seasonal green such as kale or escarole and a nice sauce. Like everything else at the restaurant, it’s in a constant state of slow evolution.

When I ordered it in February, the breast was juicy, capped with I’m-going-to-fight-you-for-it crispy skin. The risotto, plump, al dente rice laced with shreds of luscious meat, was perfectly executed. Swiss chard was the right vegetable for the moment. Thyme just tied it all together. It was a comforting crowd-pleaser. 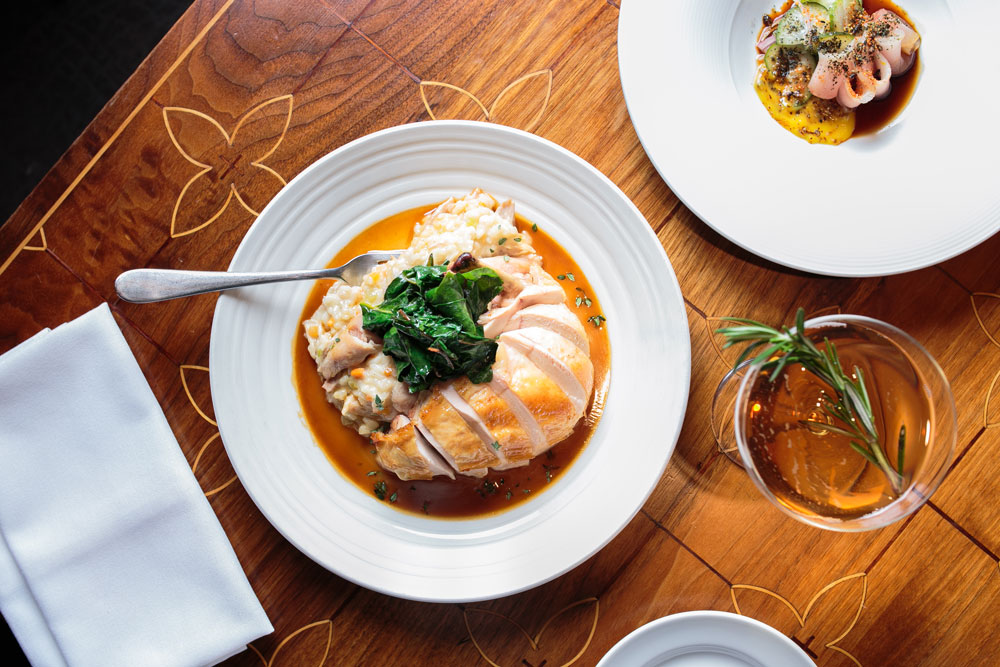 That dish was among many that got me thinking about Eleven’s place right now in Pittsburgh’s dining landscape. It’s considered by many as the place you go to for an expense-account business dinner or where you want to bring your visiting parents.

Yet with Pittsburgh’s dining boom dying down or at least in a moment of stagnation, and with hallmark restaurants such as Cure and Legume now closed, Eleven all along patiently has been delivering just-ahead-of-the-curve cuisine with an eye toward introducing dishes before they hit the mainstream. Ten years ago, they had high-quality, freshly shipped and shucked oysters on lockdown before anyone else in Pittsburgh was focusing on them. Today, you don’t see crispy lamb belly sandwiches on a lot of lunch menus around town — but you do at Eleven. 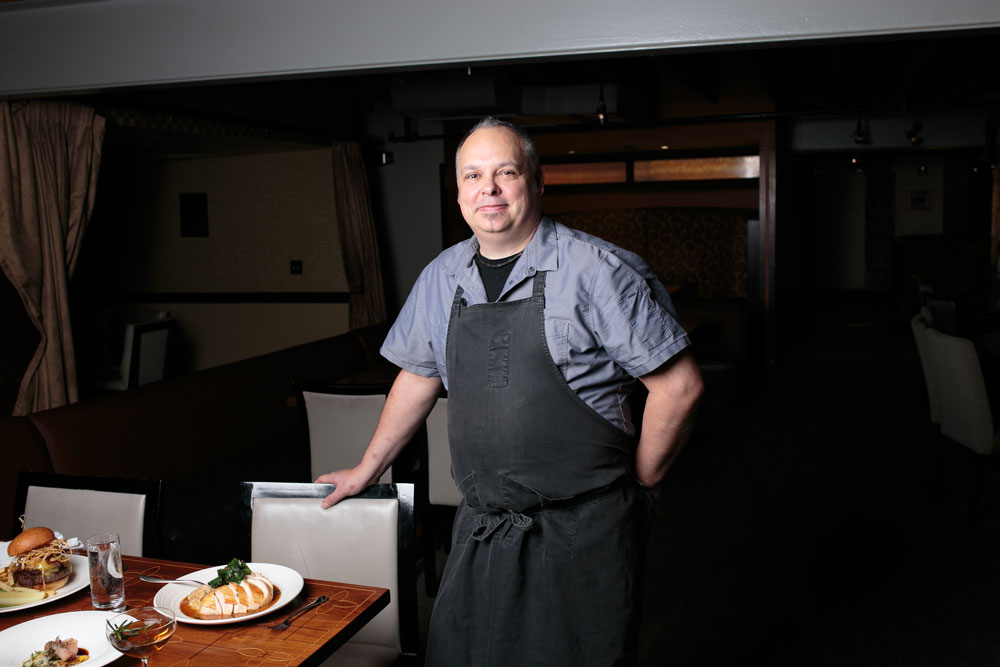 When big Burrito Restaurant Group opened its 11th restaurant in 2004, it was a show of strength for what then was a company emerging as the big cheese of Pittsburgh’s dining scene. Sixteen years later, Eleven has served as training grounds for some of Pittsburgh’s most prominent chefs, with roots that run all over the city. Eli Wahl, the long-time executive chef of big Burrito’s Casbah, took the helm as executive chef in 2016, just the third in the restaurant’s history. He succeeded Derek Stevens, who ran Eleven for a decade and now owns Union Standard. Eleven’s opening executive chef, Greg Alauzen, also runs his own restaurant, LeoGreta. Bethany Zozula (Whitfield), Justin Severino (Morcilla, Larder) and Chad Townsend (Millie’s Homemade Ice Cream) are just a few of the back-of-house success stories. Maggie Meskey, general manager of Fish nor Fowl and responsible for training a cadre of bartenders and front-of-house professionals, began her rise as a leader in the service industry working at Eleven.

It’s an expansive space that feels relatively cozy because it’s sectioned off into pockets of dining areas ranging from the see-and-be-seen downstairs dining room to the moodier upstairs tables and a seasonal patio overlooking Smallman Street. Eleven was built early in the industrial-design era, so there are exposed pipes and such, but also at a time when people cared about using high-quality building materials such as inlaid wood tables and ample soundproofing. It’s a good reminder of what makes designed-with-intention more appealing than designed-entirely-for-style. Another hallmark of Eleven is its spacious second-floor wine cellar; with an expansive book that demonstrates broad reach in both geography and price, the restaurant has one of the best wine lists in town. The upholstery, window treatments and chairs have been refreshed over the years, and it might be time to do the same for the wall at the far end of the restaurant that’s dressed with an iron fence and dried flowers that look like they were rescued from a wedding in the early 2000s. 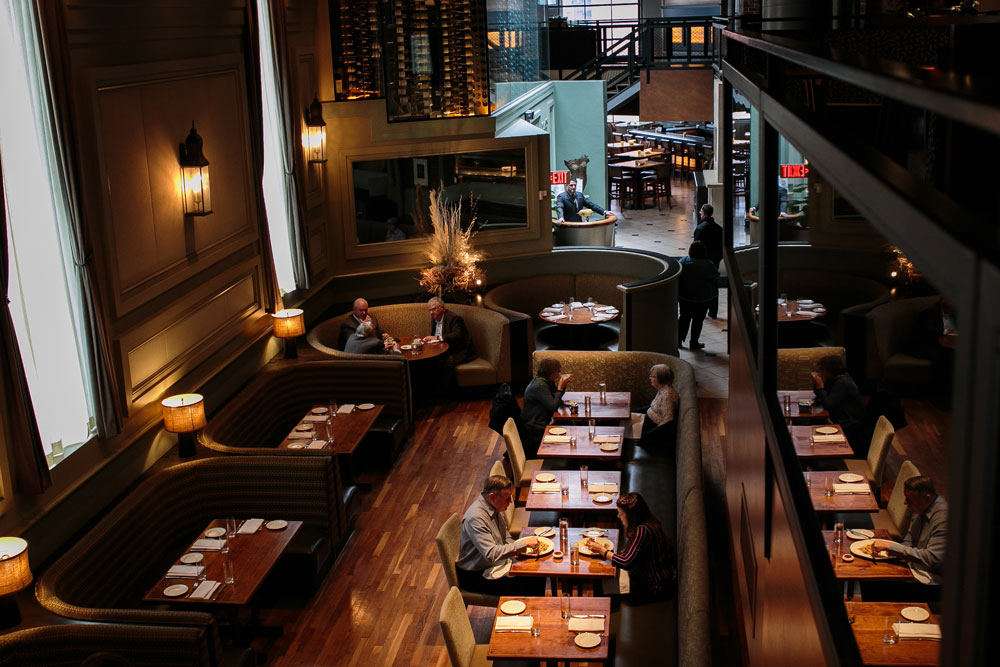 Wahl’s lunch and dinner menus are big Burrito’s most progressive. I was impressed with the consistency in cookery, too. We’re in a moment where things often trail off when the top talent is taking a night off (or experiencing burn-out because they can’t). At Eleven, I felt that, aside from a few dishes that could have used a pinch more or less of salt, things across the board were executed as they were designed.

Overall, Wahl’s dinner menu straddles a line that feels adventurous without being aggressively boundary-pushing. I cheered the restaurant’s long-standing relationship with Elysian Fields, one of the country’s foremost lamb ranchers, while enjoying one of my favorite dishes of the year thus far — lamb loin with parsnip puree, sweet potatoes, Brussels sprouts, rosemary and tart cherry-Marcona almond salsa. The lamb, cooked medium-rare as ordered, was supple, with soft notes of hay. Its accoutrement again represented precisely the kind of thing that should be served on a cold winter night in Pittsburgh, all helping to support the flavors on the cohesive plate.

Starters such as duck tasso salad with beet molasses, beets, blood orange, pomegranate, verjus pudding, pea shoots, fennel frond and pistachio demonstrate how the restaurant can be forward-thinking. Wahl’s duck was laced with smoky notes and velvety textured. The pomegranate and pistachio combination was a stealthy success that enhanced the enchantment of the peak-citrus-season blood orange slices. 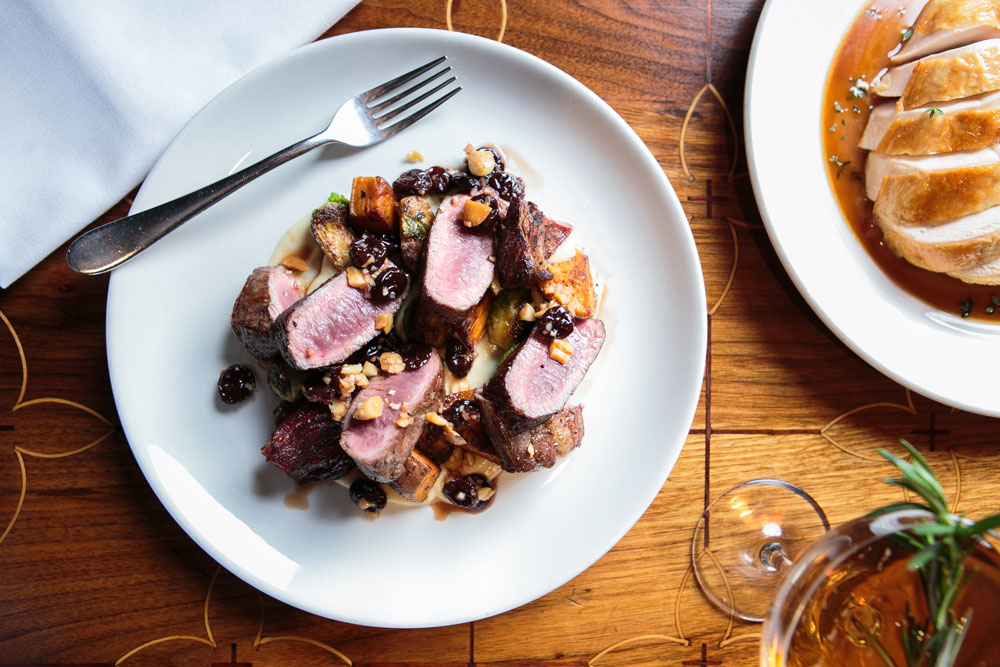 And yes, there are more conservative elements such as braised short rib with garlic smashed red potatoes, roasted carrots and Brussels sprouts salad. At Eleven, they are prime examples of how to make a “safe” dish an appealing selection. The short ribs were melty succulence, tugging at comfort food cravings. I wish the ratio of carrots and Brussels to potatoes had been reversed to reflect contemporary plating choices better, but I also wasn’t complaining when I was eating heaps of those fluffy spuds.

Lunch felt the same way. While some dishes, such as the extraordinary Eleven burger — with a juicy, thick tavern-style patty adorned with braised veal, bacon, crispy onions and cheese (go for the goat cheese) — call for an after-lunch nap, the restaurant’s lunchtime menu mostly is comprised of what best could be categorized as elegant spa cuisine. Scottish salmon was a portrait of January beauty. The fish was hard-cooked on the outside and pink within (and, alas, just a tad salty), golden beets shone like miniature suns under a shower of green frisee and the picture was speckled red from pomegranate seeds and Urfa chili. Satisfying yet not super heavy, it was a lovely thing to eat in the middle of the day. An airline-style chicken breast with black rice, garbanzo beans, spelt, Belgian endive, golden raisins, pickled red onions, broccoli, Marcona almonds and curry vinaigrette ate like a modernized Moosewood-era dish in the very best way. “This tastes like something my mom’s friends would have made when all the old hippies got together to play music,” a friend reminisced over a bite. 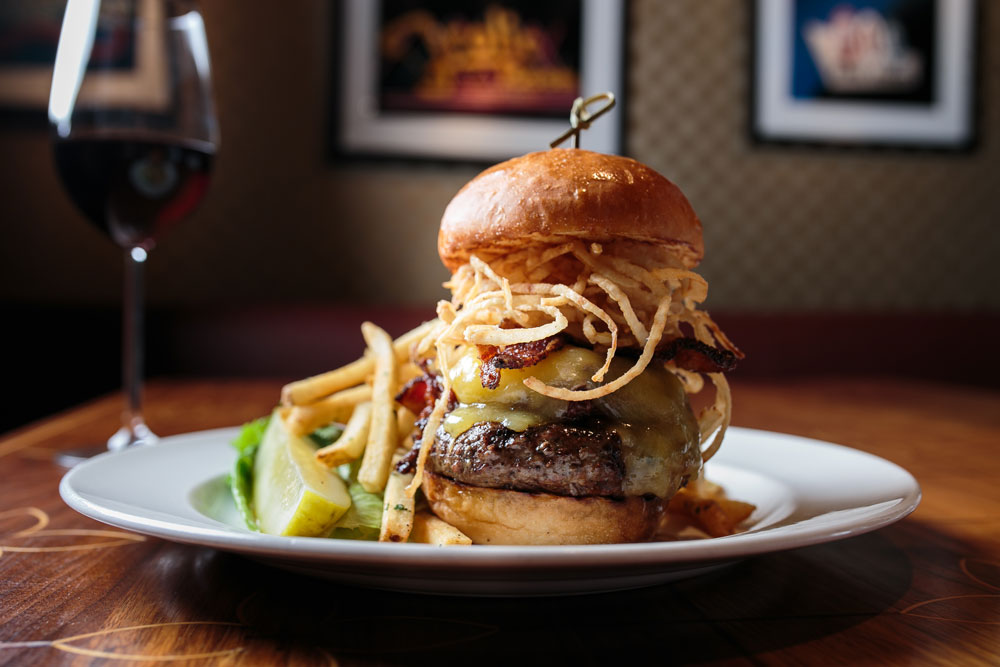 If you’re looking to keep things a little more casual or budget-friendly, Eleven’s bar is perfect for an evening getaway. You can order anything from the dinner menu but also have the option of snacky dishes such as fried cheese curds, soft pretzels and crispy Brussels sprouts, as well as more substantive items such as goat cheese anolini with smoked onion brodo, roasted sunchokes and crispy lamb. The tavern menu also has my least favorite dish, a rubbery, bland veal and pork meatball snack that feels like it’s there because someone said it had to be there; the same goes for the fried calamari.

Service overall is outstanding, but one thing management at Eleven could do to make it feel more in tune with the modern era is to step up when you let them know your table will be sharing everything. On all my visits, I was presented with comically minute rectangular “share plates,” and serving spoons were missing on a dinner visit.

That’s a small want considering how excellent everything else is at Eleven. Following three wintertime visits, I found myself asking this question: “Did Eleven’s slow upward trajectory through the restaurant boom leave it standing atop the heap of Pittsburgh’s premier dining destinations?”