With its first new restaurant in 15 years, the big Burrito Restaurant Group proves it still has it. 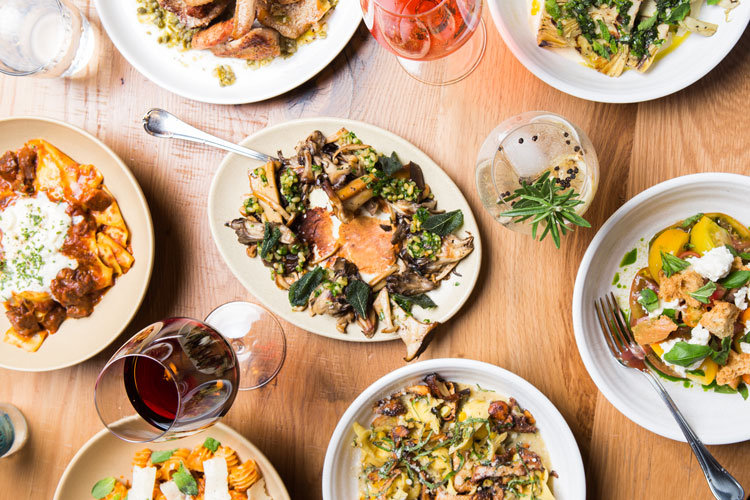 Alta Via is, at this moment, my favorite Pittsburgh restaurant opening of 2019. It also marks a long-overdue step forward for the city’s most influential restaurant group.

I’m stoked that the big Burrito Restaurant Group branched out with its first new concept in 15 years, opening Alta Via in April the strip-mall landscape of O’Hara Township. Drawing influences from the seasonally driven culinary philosophies of Italy and Northern California, as well as like-minded restaurants such as Via Carota in New York City, the restaurant eats of-the-moment yet retains a classic vibe in line with big Burrito’s mainstream maturity.

In the mid-1990s, big Burrito opened a series of must-go concepts, beginning in 1993 with the then-groundbreaking-for-Pittsburgh Cali-Mex hotspot Mad Mex in Oakland. Over the next three years, ownership explored the globe with Caribbean cuisine at Kaya, Mediterranean at Casbah, pan-Asian at Soba and sushi at Umi; all remain worthwhile today. Following that, there were a couple of concepts that didn’t last and then, in 2004, the splashy opening of its biggest project yet — the upscale contemporary American restaurant Eleven Contemporary Kitchen, which, along with Casbah, is a Pittsburgh Magazine Best Restaurant.

There have been occasional rumblings about a restaurant that isn’t a Mad-Mex-in-a-new-location (of which there are many), but nothing emerged. Instead, the group, led by president and corporate chef Bill Fuller and a deep roster of longtime employees, has cemented itself as the go-to, if a bit conservative, adult-in-the-room in the midst of Pittsburgh’s restaurant boom. All in all, has proven to be a good thing, providing a slow-and-steady presence in an at times uneven landscape. 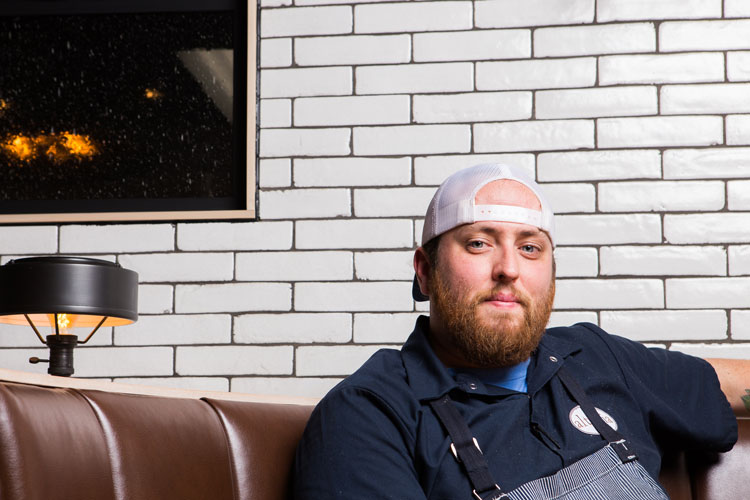 At the helm at Alta Via is executive chef Ben Sloan, a longtime big Burrito stalwart and a grade-A example of why it’s a good thing to stick with a restaurant group that rewards loyalty and has strong training systems in place both front- and back-of-house. Sloan started as a line cook at Eleven in 2005, worked through the ranks, and was promoted to Kaya’s executive chef in 2012. Under his charge, there is a lean-forward yet grounded energy at Alta Via that can feel special. On top of that, it didn’t matter if he or general manager Jennifer Johnson were present or if someone else is running the show on any given evening; my experiences at Alta Via have been universally solid. That’s refreshing — consistency is something that is lacking in many Pittsburgh restaurants.

Service at Alta Via sits in the pocket from excellent to exemplary. There’s enough checking-in to make you feel cared for, yet not so much that you feel like your conversation is constantly interrupted. Even better, servers take ownership of the experience by suggesting how best to course a meal. I’ve been to a lot of restaurants recently where they ask you how to bring the dishes, and I have to say I really like it when someone knows the menu well enough to suggest, “This is how we’re going to do this today.” 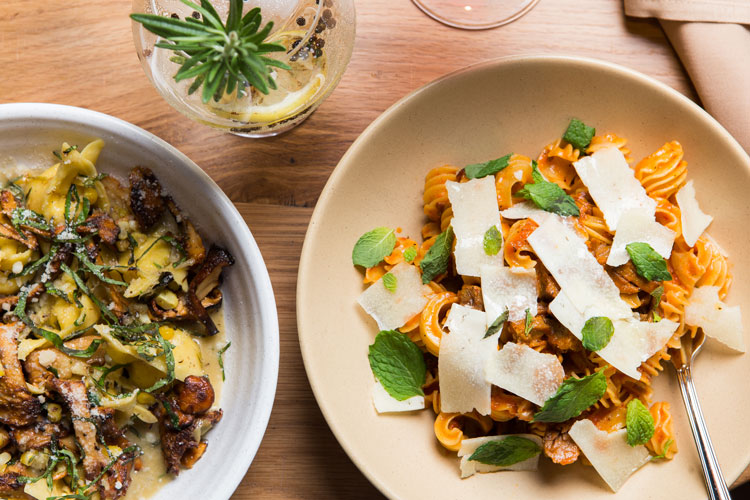 Alta Via is the type of restaurant where everyone can order individually — and a solo diner could make a lovely evening out tucked away at the square-shaped bar with a good book, a crisp glass of wine, a salad and half portion of a pasta course — but in my opinion the experience is more fun when you get an assortment of dishes to share.

The menu is a little longer than it needs to be, but that’s OK. With the right strategy, you’re in for a treat. big Burrito has long-standing relationships with a number of regional farms, and Sloan takes advantage of that by sourcing from Who Cooks For You Farm, Penn’s Corner Farm Alliance, Elysian Fields Pure Bred Lamb and other growers. 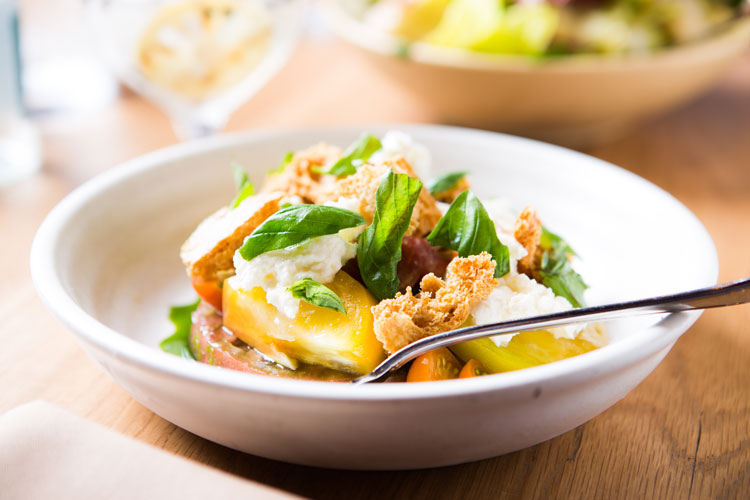 What this means is that you should pay attention to the daily specials. There can be a lot of them — indeed the biggest flaw in service is that some evenings there were so many specials we ended up forgetting what some were — but almost all hit their mark. Strawberry and asparagus salad, which was bolstered with toasted sunflower seeds, pea shoots, basil and pickled ramps, was perhaps my favorite peak-spring restaurant dish of the year, rivaling what I would have made if I were cooking from my own garden. A July special featuring discs of pasta and zucchini speckled with bits of Marcona almonds, sage and oregano blossoms married herbaceous butteriness with toothsome pasta and squash in scrape-the-plate supremacy.

Keep thinking vegetables when looking at the rest of the menu. Baby artichokes, cooked until tender and given a little zing with charred Meyer lemon and mint salsa crudo even won over a friend who typically isn’t a fan of artichokes. Little Gem romaine salad has become a classic restaurant dish, and at Alta Via, with ultra-crisp lettuce, breadcrumbs and just the right amount of Italian vinaigrette, it’s a vibrant winner for a first course. 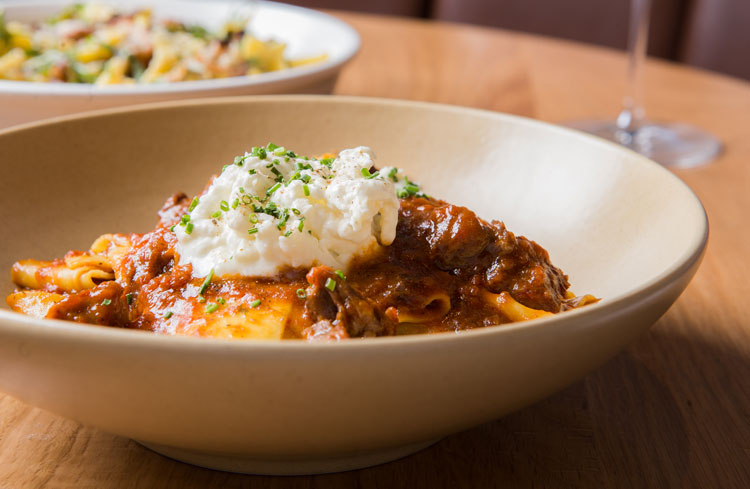 Pasta earns a shared space in the spotlight at Alta Via. Made in house, the shapes of each one are designed to match their accoutrement.

Pappardelle with beef short rib sugo and stracciatella is Alta Via’s number one seller, and it’s quite tasty, though not terribly exciting. Instead, go for radiatori, a pasta shaped like a model-car radiator that catches the rich flavor of braised Elysian Fields lamb and is enhanced with subtle sweetness from mint and a soft heat from Calabrian chili. Tortelli, which, when I had it, was filled with a sweet and creamy blend of spinach and ricotta, was my favorite. The pasta shape, sort of like a big tortellini, gives it both softness and a nice chew, and its partners — rich caramelized onions and salty, crispy spek — came together for a dish simple and straightforward, yet full of flavor. It’s another fine example of how Sloan’s key to success is restraint when it comes to ingredients — with Fuller as a mentor, he knows when to pull back from adding too many things on one plate.

There is a section called focolare (Italian for hearth) and even though it contains dishes such as perfectly tasty bone-in strip steak and meaty pork chops, there isn’t much about this that’s different than many restaurants around town, including Eleven and Casbah. There are some fish options and some poultry options, and they’re all pretty good, but you’re better off spending your time, money and appetite on the more interesting pasta and vegetable dishes. 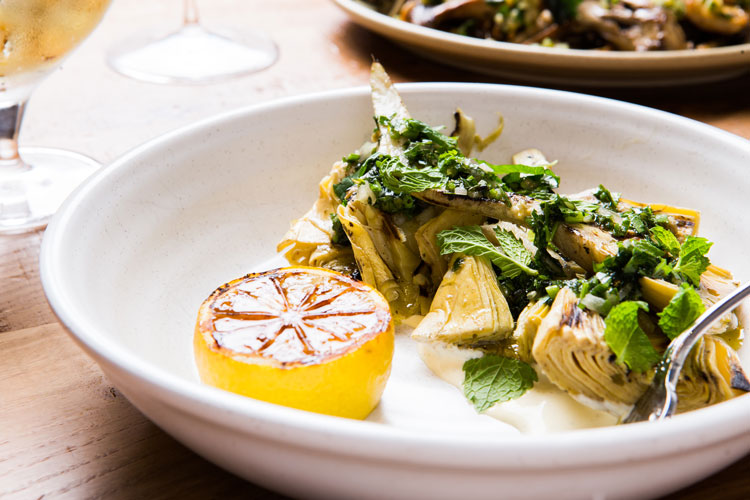 There is some room for improvement at Alta Via. A few dishes come with a float of soft cheese or an addition of cured meat when they don’t need one. And, for a restaurant that pays so much attention to celebrating seasonal vegetables, I was surprised that some of the salads I had were over-garnished with either arugula or pea shoots as if they had to hurriedly get rid of a bag of them.

I also wish the menu were a tad more dynamic. One of my favorite cool weather dishes was an assembly of roasted beech, hen of the woods and royal trumpet mushrooms, which came with smoked mozzarella, pine nuts and crispy sage. It was delicious — but, two months after having it for the first time, it felt a little out of place on a warm, early summer night. Since this happened on the night we forgot some of the myriad specials, it had me wondering why the menu wasn’t printed with those specials, and the mushrooms benched for the season.

One of the restaurant group’s hallmarks is consistency, but that can also lead to a bit of stagnancy. I’d love for there to be no “can’t get rid of these even if we wanted to” dishes at Alta Via in the way that there are at other big Burrito restaurants. Perhaps at Alta Via, with all it has going for it, the signature can be steady, even-handed dynamism. This way we’ll be happy to again see those dank mushrooms or the bright strawberries just when we’d nearly forgotten about them

This article appears in the September 2019 issue of Pittsburgh Magazine.
Categories: From the Magazine, Hot Reads, Restaurant Reviews