Adding a fried chicken family meal is a savvy and delicious move for the beloved Shadyside restaurant. 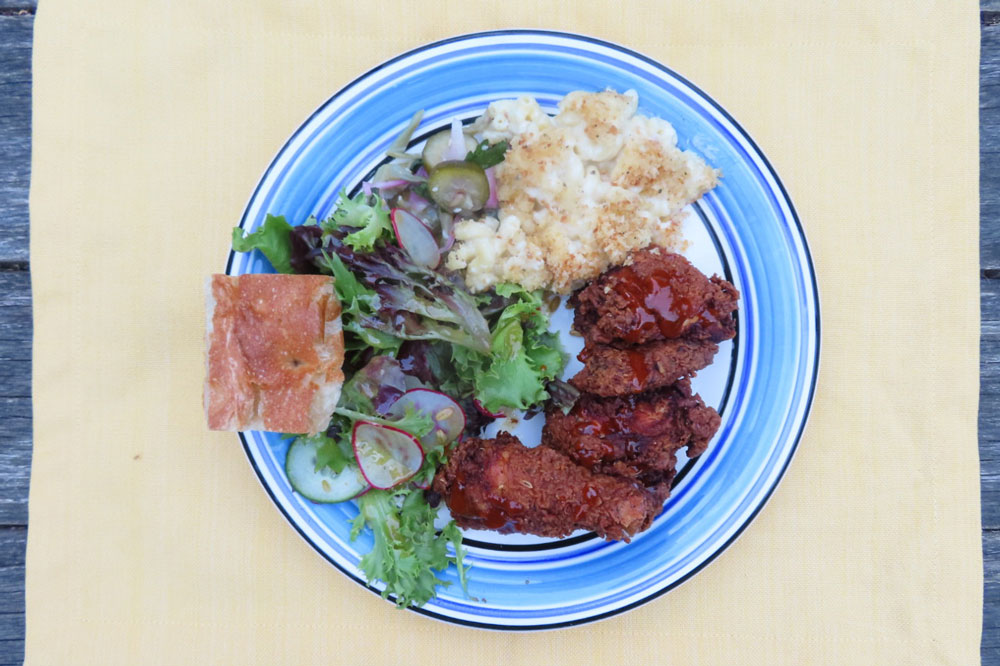 In the run-up to re-opening Casbah Mediterranean Kitchen & Wine Bar on March 26, Executive Chef Dustin Gardner and big Burrito Restaurant Group President and Corporate Chef Bill Fuller brainstormed about which dishes would be successful on a takeout menu for a 24-year-old restaurant that typically serves nearly all of its meals on-premises.

They made a list of the establishment’s crowd-pleasing dishes, thought about items that would be relatively affordable (considering it’s a higher-end restaurant) and, most importantly, deliberated what would travel well. “Some things didn’t make sense. Grilled octopus is lovely when it’s warm, but it doesn’t taste very good when it’s in a bag for 20 minutes,” says Fuller.

Fuller and Gardner reduced Casbah’s menu by about half. Flagship dishes such as ricotta cavatelli with house-made fennel sausage, spinach and crushed tomatoes; and arugula salad with house-made pancetta, crimini mushrooms, potatoes, Riverview Farms goat cheese and pancetta vinaigrette made the final cut, as did appetizers such as grilled asparagus with arugula pesto, pistachio and Parmesan; and tuna tartare with shallots, celery leaves, Meyer lemon emulsion and crème fraîche.

The restaurant’s appreciation of seasonality is still in effect, too. Diners who look forward to the fleeting soft-shell crab season can order a Casbah version of the crustacean with asparagus, fava beans, radish, focaccia croutons, garden greens, celery seed aioli and vinaigrette.

With most of big Burrito’s other restaurants shuttered, Fuller brought in the executive chefs from three of its other specialty restaurants — Eleven Contemporary Kitchen, Kaya and Soba — to help with the process, and the culinary team added hits from those restaurants to Casbah’s to-go menu. (big Burrito’s Mad Mex chain and Alta Via had fairly robust to-go business prior to COVID-19 and have remained open as individual brands.)

Among other dishes, Kaya’s fried chicken, dumplings from Soba and the Eleven burger made their way into the Shadyside kitchen. Fuller decided to re-open Soba on April 24 and Kaya on May 14, and now those chefs, and their dishes, are back at their home restaurants. Highlights from Eleven’s menu, along with its executive chef (and former Casbah executive chef), Eli Wahl, remain.

“When Kaya opened up, we wanted to do our own fried chicken, one that made sense for Casbah,” Gardner says.

It’s served as a family meal alongside macaroni and cheese, mesclun salad, pickled vegetables and focaccia. I ordered one last week, and it was one of the most enjoyable dinners I’ve had since Pennsylvania restaurants moved to a to-go model.

When I arrived at Casbah at 7:25 p.m. to pick up my 7:30 order, the food wasn’t ready. I loved that. It meant, just like I was ordering a meal inside a restaurant, my dinner was timed to leave the kitchen when I was ready to eat it. “We’re keeping the standard. We’re not pumping things out just to pump them out,” says Gardner.

Casbah’s covered patio now serves as its waiting room. There were clearly marked spots for people to stand, ensuring everyone in the space was adequately distanced, as well as signage letting people know about all of the safety measures in place at the restaurant. The far side of the room, which typically would be packed with diners on a warm spring evening, was covered in heavy plastic. Fuller says he’s using the time to do much-needed structural repair work at Casbah, as well as the floors of the kitchens at Soba and Eleven. Although the space felt transitional, the staff was as professionally amicable as they always are at the restaurant. “It’s weird going to the restaurant you’ve been going to for 20 years and there’s plastic and tape everywhere and tables put into a corner. So we’re doing our best to keep things upbeat and friendly when you come in,” says Fuller. 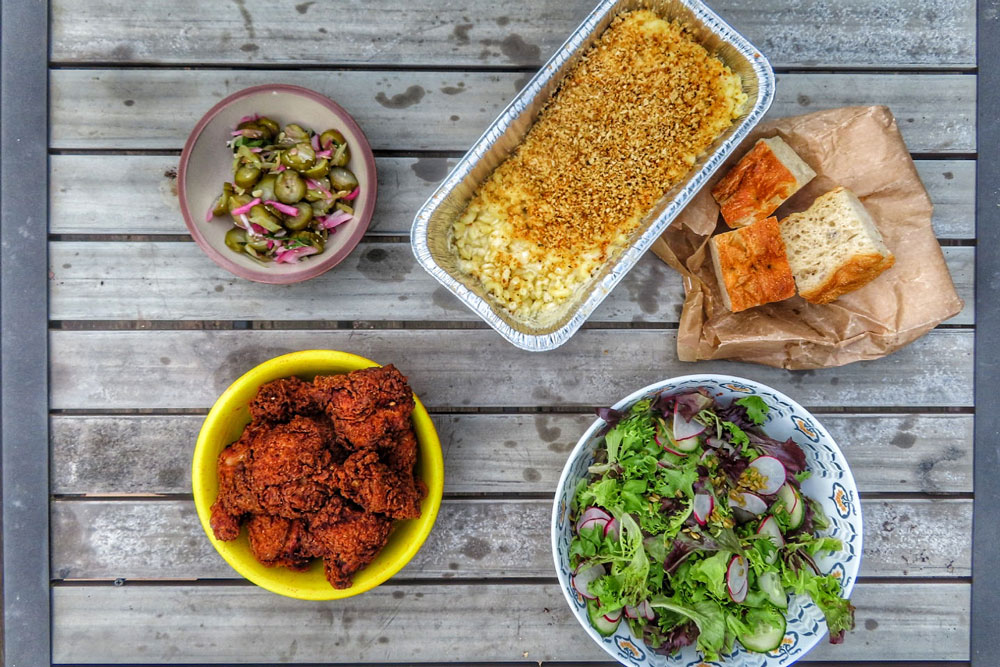 The two-bag meal was neatly packaged — this is a restaurant business that also runs a robust catering operation, and that was noticeable when I got home. There were little touches, such as layering the salad so that it presented beautifully and keeping the sherry vinaigrette in a separate container so that the greens wouldn’t wilt, and an exclamation point on the label for the macaroni and cheese that demonstrated thoughtfulness. And I appreciate that there wasn’t a lot of extra stuff, such as cheap plastic cutlery wrapped in even more plastic, that I didn’t need for a meal at home; Gardner says that the company is doing as much as it can to minimize waste.

Before I set the table in my garden, I did what anyone with a heart would do. I munched a chicken thigh. It was everything I wanted it to be. The chicken — marinated in yogurt, dredged in seasoned flour, fried and finished with sumac — was salty, crunchy, crispy, juicy, tangy and bright from the spices such as coriander used to flavor it; that spice blend also felt on-theme for Casbah. The chicken comes with harissa hot honey sauce, which is flavorful … but not at all hot. And that’s just fine; I don’t think every serving of fried chicken needs to be a scorcher. If you want a little kick, however, make sure you have some hot sauce on hand.

The meal costs $65, and there was more than enough food for four people. The only catch is that it’s just one (big) chicken, and that chicken is so good that, if you’re dining with a group, you’re going to squabble over the last pieces. If you do for some reason have leftovers, they get high marks in the cold chicken test — the chicken was still fairly crispy when I had a leftover breast piece for breakfast, and some of the flavors, such as the herbaceous notes of fennel, stood out even more than when served hot.

Casbah is launching a lunch menu sometime in the next week or two, and Fuller says the evening takeaway menu will continue to evolve. Gardner says he plans to keep his commitment to regional growers, too. Look, for example, for more produce from be.wild.er Farm as the season starts to boom.

Plans are the works for outdoor dining and limited indoor dining when those options are authorized. For that evolution, safety will be at the forefront, with servers and chefs wearing masks, hand sanitizing stations all around the restaurant and an upgraded air filtration system.

“We’re preparing. We’re going to be as clean as we possibly can,” Fuller says.