The owners of No Names Pub and Monterey Pub welcome people from all walks of life — and death. 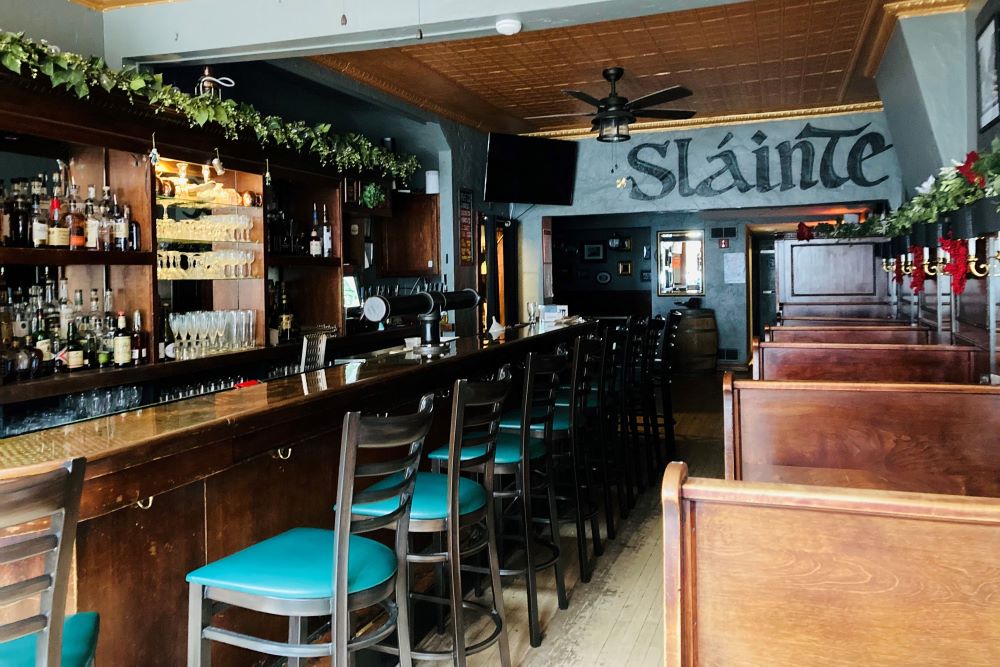 MONTEREY PUB ON THE NORTH SIDE | PHOTOS BY KRISTY LOCKLIN.

Monterey Pub on the North Side gets a lot of regulars — including one who is possibly buried in the backyard.

Discovered in the basement of the century-old building, her tombstone now stands like a forgotten Halloween decoration in the small outdoor area. Barely legible due to time and the elements, it belongs to a woman named Josephine Malara who died in 1919. When the lights flicker inside the bar, the staff raises a toast to “Mother,” the most prominent word on the old monument.

“We’re the only pub with a graveyard,” says Sophia Milinkovic, co-owner of Monterey Pub and the recently opened No Names Pub, which is located in the former North Park Lounge across the street from Allegheny Cemetery in Lawrenceville.

The two businesses welcome people from all walks of life — and death.

In October 2021, Milinkovic teamed with Rick and Kara Krist who run Lefty’s Bar in the Strip District to reopen Monterey Pub, a popular haunt in the Mexican War Streets that shut down during the pandemic. Together with a  “Pub Squad” of industry veterans (mostly from big Burrito Restaurant Group and Galley Group) they want to launch a new, but as yet-unnamed, culinary entity that is as focused on building community as it is on making money.

The pandemic forced many people — including Milinkovic — to quit the restaurant world and find a new calling, but the members of the Pub Squad couldn’t abandon their passion. 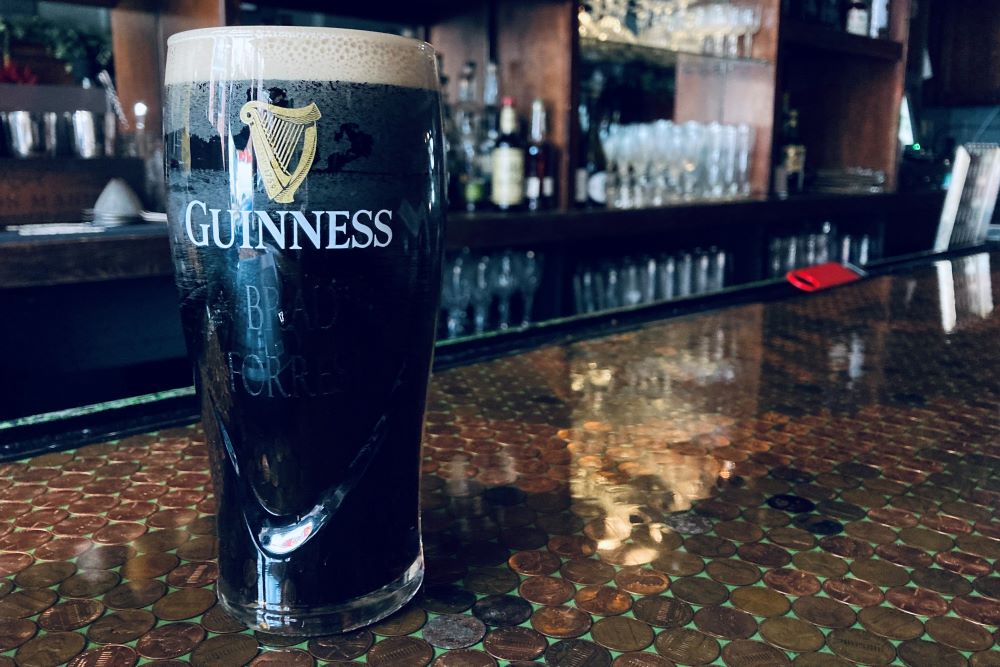 “When you come into our pubs, you’re part of us and the vibe is very real,” the Mexican War Streets resident says. “Want a shot and a beer? Sure thing! A high-end martini? We got you! A basket of fries or the shepherd’s pie made with beef that’s been braised for 24 hours? It’s yours! Everyone here brings something different to the table, from the owners to the kitchen crew to the bussers. They all contribute something other than just being a body at work and believe in what we’re doing.”

The building at 1227 Monterey St. has housed everything from a barbershop to a brothel. Rumor has it bootleggers ran booze out of the basement during Prohibition.

There’s a timeline on the wall that traces the structure’s history back to 1934, when Joe Malara opened Malara’s Cafe. It’s changed hands and had multiple names over the years. It’s been the Monterey Pub since Mark and Nancy Wade christened it as such in 2003.

“Monterey Pub is something that people loved,” Milinkovic says. “Changing the name would’ve caused an uproar in the neighborhood. We didn’t want to change too much anyway. We essentially wanted to just lighten it up.”

Thirty days after closing on the property, the squad was able to clean it from top to bottom, make a few cosmetic changes, gut the kitchen, create a penny-top bar and install a new draft tower.

The Monterey menu is smaller than what it was under the previous owners, but Milinkovic says what it lacks in quantity, it makes up for in quality.

Executive Chef Adrian Cooley, who went to culinary school at Indiana University of Pennsylvania and cut his teeth at Galley Group, oversees both kitchens. Unlike a lot of deep-fried pub grub, much of his fare brings in a variety of tastes and textures.

At Monterey you can get traditional pub offerings such as fish and chips and locally sourced bangers and mash. The menu also includes smash burgers, pitas, salads, flatbread pizzas and sandwiches. Appetizers range from mozzarella sticks and onion rings to cheddar garlic buttermilk biscuits to soup du jour. 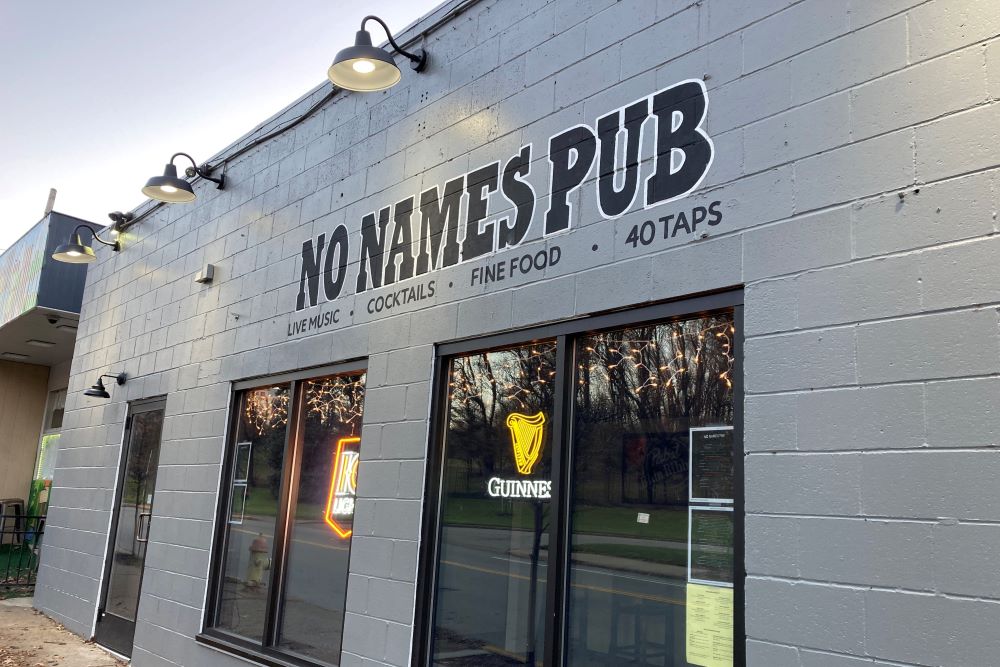 No Names Pub at 4717 Butler St has similar eats, but a bigger kitchen allows Head Chef Jason Watts to create more of a variety, including pasta dishes, family-style entrees, a kids’ menu and sandwiches such as the meatloaf, a bacon-wrapped mix of ground beef and pork on a Kaiser roll that’s topped with white cheddar and roasted garlic aioli. 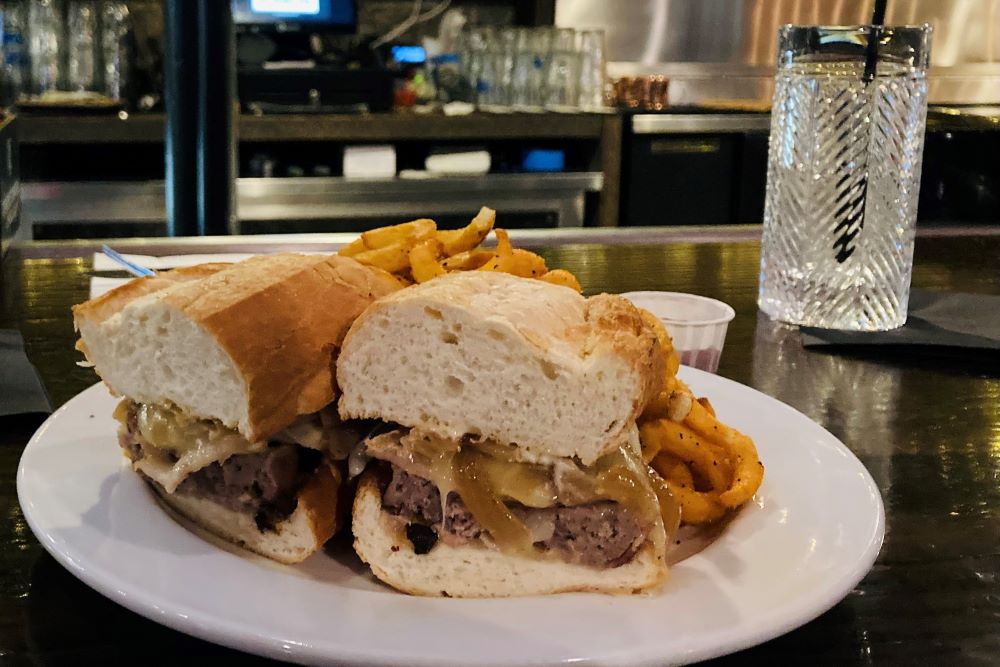 A MEATLOAF SANDWICH AND CURLY FRIES AT NO NAMES PUB.

It’s only been a few weeks since the grand opening, and Cooley says they’re still figuring out the Lawrenceville crowd to deliver what they want to eat. Deciding on a name was a much bigger challenge.

No Names started as a joke, but it stuck and has become a source of pride for the fledgling restaurant group members, who see themselves not as individual culinary superstars, but a team that is greater than the sum of its parts.

The Lawrenceville site will have live music inside and events on the large side patio during warmer months. Monterey’s “graveyard” also welcomes patrons to sip their pints in the Great Outdoors.

“The point of what we do is to take you out of reality,” Milinkovic says. “When you’re here, you’re in a place that cares a lot. You want to know the bartender and the staff. It’s an extension of your home.”