The award-winning director discussed Fred and her film with Pittsburgh Magazine. 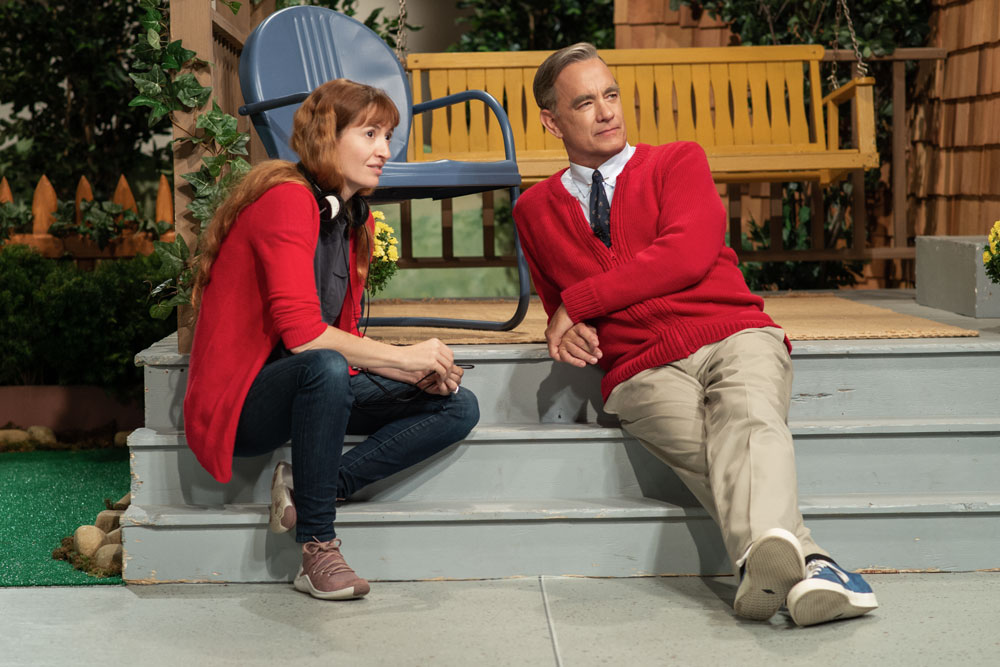 MARIELLE HELLER WITH TOM HANKS ON THE SET OF “A BEAUTIFUL DAY IN THE NEIGHBORHOOD.” PHOTO BY LACEY TERRELL / SONY PICTURES

At one moment in “A Beautiful Day in the Neighborhood,” Joanne Rogers (played by Maryann Plunkett) corrects journalist Lloyd Vogel (Matthew Rhys) after he refers to Mister Rogers as a “saint.” That’s the wrong term, she explains; you can’t be like a saint, but you absolutely can be like Fred.

As it turns out, that scene was based on a conversation between the real-life Joanne Rogers and the film’s director, Marielle Heller.

“Joanne pulled me aside and said, ‘It’s important you don’t think of him as a saint. The reason you shouldn’t think of him as a saint is because then his message is unattainable.’ That’s what clicked for me,” Heller says. “If he’s above the rest of us — if he exists in a different realm, if he’s on a different plane, if he wakes up in the morning and is just good — why would the rest of us even try? We’re not that. None of us are.”

Heller says that “A Beautiful Day in the Neighborhood” sought to portray Rogers, played by Tom Hanks, as a human character, even as his influence fundamentally changes Vogel. That included showing some very subtle — and, Heller says, remarkably precise — moments of doubt.

“A Beautiful Day in the Neighborhood” is the third feature from Heller, who also directed the Oscar-nominated “Can You Ever Forgive Me?” and “The Diary of a Teenage Girl,” for which she won an Independent Spirit Award for Best First Feature. “Neighborhood,” which has already garnered substantial Oscar buzz, is not a Mister Rogers biopic (despite many misconceptions in coverage of the film). Heller says that’s partially a matter of personal preference — “You’ll never see me making a biopic,” she says, before adding a judicious, “Never say never, I guess” — but also because the film’s goals were entirely different than those of a biography.

“We just had this gorgeous documentary,” 2018’s “Won’t You Be My Neighbor?,” “that told us all the information we needed to know about Fred. The hope with this movie is much more that it’s Fred in practice. You get to experience Fred through this movie. You don’t learn about him like you’re studying somebody; you get to experience him.”

Occasionally, the viewer’s involvement in the film is active; as it begins, Mister Rogers directly addresses the audience, as he did for decades on television.

“We always envisioned this movie as a big episode of ‘Mister Rogers’ for adults. You weren’t allowed to watch ‘Mister Rogers’ as a kid without being an active participant. He would ask a question of the audience and then he would wait to see how you’d respond. ‘Do you know how crayons are made?’ And then he’d leave a long pause, to see how you felt.

“We don’t always engage with our audience exactly like that. But it’s something I think about a lot in filmmaking — the audience’s experience in every moment.”

That translates into many powerful, disarming moments for the viewer. But Heller is quick to point out that the film isn’t a “heartwarming-slash-depressing” tearjerker.

“The movie is not here to make you cry,” she says. “You get out of the movie whatever you bring into the movie. Just like Fred, I think this film is fascinating, entertaining, confusing. He was not vanilla. He was complex. It’s fun to get to live with him for a little while.

“It’s easy to get caught up in talking about what Fred’s message was, and what it all means, but he’s also a fascinating antagonist [for] a movie. He’s an interesting person, and watching these two men go head-to-head who are so different from each other … It’s a good time.”