It’s Feast of the Seven Fishes Time in Pittsburgh

Local restaurants are offering their take on the traditional Italian-American Christmas Eve meal. 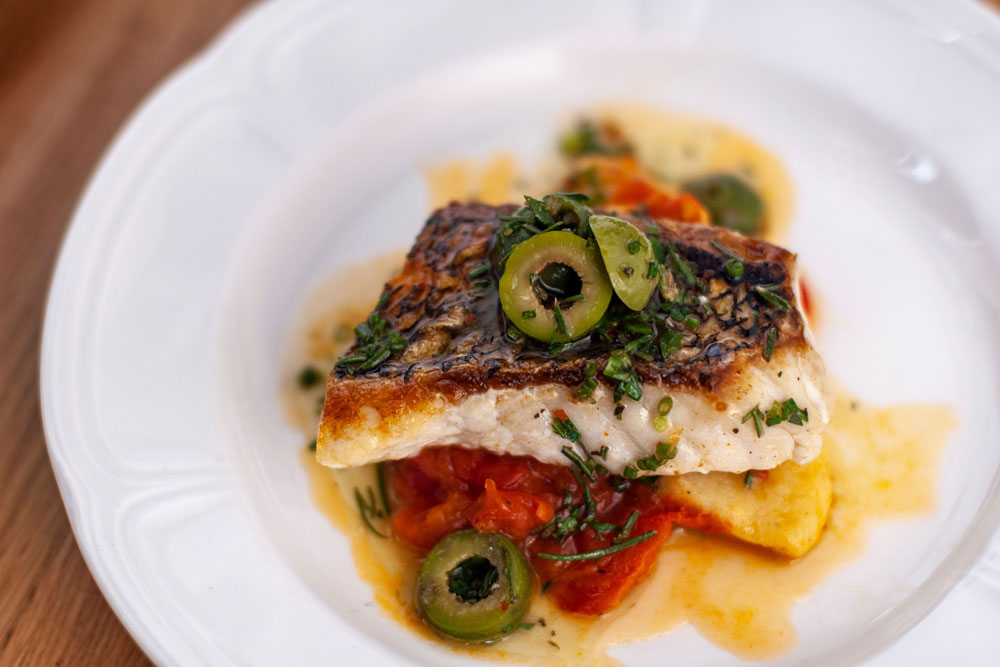 The Feast of Seven Fishes is a hallmark Christmas Eve tradition in Pittsburgh’s Italian-American households. The celebration took root in many regions of the United States in the late 1800s and early 1900s as Italians began to immigrate en masse to the country and share their culinary heritage.

“We can’t go back and say it comes from one person or one place. The Feast of the Seven Fishes is an amalgamation of many different regional Italian traditions into something that is an Italian-American culinary tradition,” says Melissa E. Marinaro, director of Italian American program at the Senator John Heinz History Center.

Variations of the meal began to develop in areas where Catholic migrants from Italian coastal regions served a seafood-rich meal known as La Vigilia as part of the observance of Christmas Eve, a time when meat typically was eschewed. However, the specifics of what people ate primarily were guided by what was available where they lived. And while there usually was an odd number of fish served, it wasn’t necessarily a feast of seven.

It was in the United States, as Italian identity merged with American identity, particularly in the wake of the two world wars, that the feast as we know it began to take hold, particularly in cities such as Pittsburgh, where immigrants from southern Italian coastal regions of Calabria, Abruzzo, Sicily and Puglia settled.

Our inland location didn’t stop those former coastal residents and their families from preparing their yearly seafood feast. “You go back to the rivers and the railroads, and then the Strip District being built around the produce terminal, and we’ve had good access to seafood despite being an inland city,” Marinaro says.

The Feast of Seven Fishes is just as it sounds — a meal consisting of seven seafood dishes (some non-fish sea creatures such as bivalves and crustaceans count as fish here). According to Marinaro, that number likely has its roots in Catholic philosophy (seven is a recurring number in the Bible as well as other Catholic works). Traditional Seven Fishes dishes include fried smelts, baccalá, scungilli (conch), eels and calamari, and while most homes keep to that framework, some modern menus might consist of anything from red-sauce restaurant favorites such as clams casino to sushi (my pals and I added seven fishes within Seven Fishes nigiri course from Mola during our daylong feast last year).

Quite a few Italian and Italian-American restaurants have offered their take on a Seven Fishes menu in recent years. It’s a tasty way for people — especially seafood lovers — whose families don’t celebrate the feast to get a sense of why this tradition remains essential and an opportunity for those who want double the fishes to enjoy a meal in addition to the one they’ll have at home on Christmas Eve.

“There’s significance in this for us,” says Justin Steel, executive chef and owner of Bar Marco in the Strip District.

Steel grew up attending Seven Fishes feasts with his culinary mentor, Marco Enrico. He launched his first Bar Marco Seven Fishes menu seven years ago with Rick Easton of Bread & Salt Bakery (now in Jersey City Heights) and later prepared the meal with Chad Townsend of Millie’s Homemade Ice Cream. While some years have revolved around a theme, this year, Steel says, “I don’t want there to be a difference. I want this to be like the meal you have at home. I don’t want it to feel like a restaurant meal.”

Cara DelSignore, co-owner of Stagioni on the South Side, feels similarly. Her grandmother, an immigrant from Abruzzo, prepared the family feast throughout DelSignore’s childhood. She and her husband, Stagioni co-owner and executive chef Stephen Felder, first offered the Seven Fishes a decade ago and, for the past seven, have offered a family-style meal every Sunday in December. “We always try to sprinkle some of our family’s staples throughout the weeks we do it,” DelSignore says.

And, Dave Anoia, co-owner of DiAnoia’s Eatery in The Strip, says there’s another reason to enjoy Seven Fishes at a restaurant, even if it doesn’t veer too far from the course of a home-cooked meal. “We’re doing all the cooking, serving and cleaning up. Hopefully, we can take some stress off and let you relax for a little bit,” he says.

Some local Seven Fishes dinners have already passed (we encourage you to bookmark Piazza Talerico and La Tavola Italiana for next year), but there are still a few forthcoming. Reservations are required for all of them. 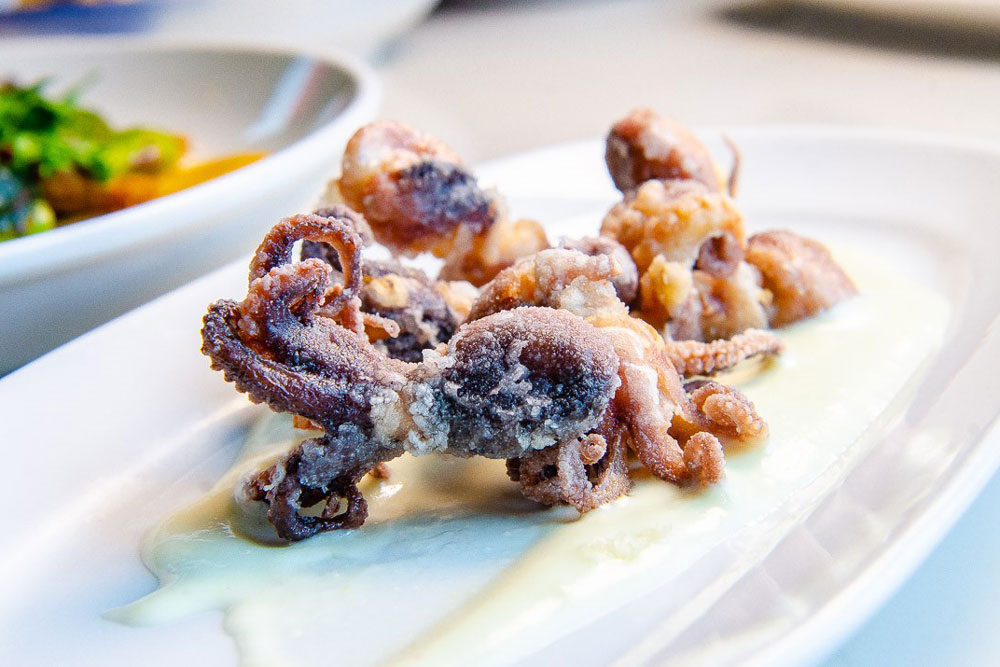 Bar Marco
Bar Marco presents two nights of Seven Fishes this year on Dec. 20 and 21, with a limited number of takeaway meals offered on the 20th. Executive chef/owner Justin Steel is preparing three courses, all of which hone closely to southern Italian culinary traditions (much like Bar Marco’s regular menu). Antipasti will feature fried smelts with salada verde and shrimp arancini bagna cauda with endive, turnips and bread; the pasta course is squid ink orecchiette with octopus, monkfish and saffron; and, a family style main course has braised baccala with tomatoes and chickpeas, poached sturgeon with fennel and capers and baked mussels oreganata. Dessert is included in the package, which is $85 and includes gratuity, and coastal Italian wines are offered for purchase. The meal takes place in the covered and heated patio, and reservations are accepted on both nights between 4 to 9 p.m.

Della Terra Italian Bistro
Seven Feasters in the North Hills should look to Della Terra Italian Bistro in Zelienople, which offers a six-course meal that walks the line between traditional and contemporary. Among the dishes served are whipped baccala with grilled bread and chili oil, grilled octopus with roasted fennel, pickled onion, microgreens and blood orange vinaigrette and cioppino with mussels, clams, sausage, beans and fennel. The meal is $100 per person, and a wine pairing is available for an additional $30.

Stagioni
The final installment of Stagioni’s feast of the Seven Fishes is a 6 p.m. seating on Sunday, Dec. 19. The communal-style meal highlights dishes such as mussels in saffron cream sauce, stuffed clams, fried calamari with pepperoncini, smoked salmon spread with pumpernickel and capers, pasta puttanesca and swordfish polpette with bitter greens and Calabrian chili oil. The meal will end with a selection of family-favorite cookies such as thumbprints and sugar cookies. Dinner is $65.

DiAnoia’s Eatery
DiAnoia’s Eatery in The Strip takes the feast and turns it into a festival by running a special Feast of the Seven Fishes menu from today through Dec. 23. The five-course menu is served family style. It includes traditional items such as fried baby octopus, cioppino and baccala salad, as well as modern interpretations such as raw oyster with basil oil and preserved lemon and caviar and potato aligot. The meal is $65 per person, with wine pairings available for an additional $35.

Alta Via
Alta Via is a newcomer to the Seven Fishes tradition. The O’Hara restaurant offers two seatings (5 and 8 p.m.) for a family style dinner on Dec. 23. The modern Italian menu features tuna with cured beet, egg yolk and crispy farro, scallop with blood orange, fennel and broccolini, prawn with Calabrian mascarpone, lemon and tarragon and black bass with gnocchi, stewed tomato and warm rosemary and olive vinaigrette. Dinner is $95, with an optional wine pairing for $50.