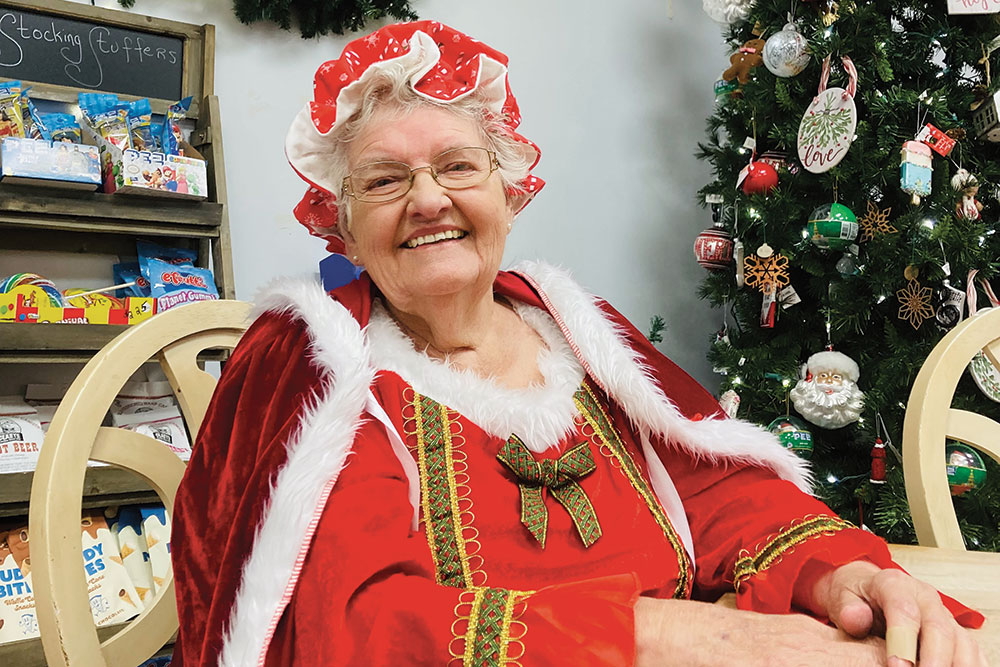 Dorothy Jackson is 91 years old, but when it comes to Christmas, she’s a kid at heart.

“To me, Christmas is everything,” she says. “It’s the way people act and the way they talk. Christmas is gorgeous. I wish it would last all year.”

And here, it does.

Jackson, who’s donned a Mrs. Claus costume around town for decades, is the official face of Sweets by Mrs. C in Monongahela. The year-round, yuletide ice cream and candy shop is owned by her daughter Heidi Hoffman, the youngest of seven children. 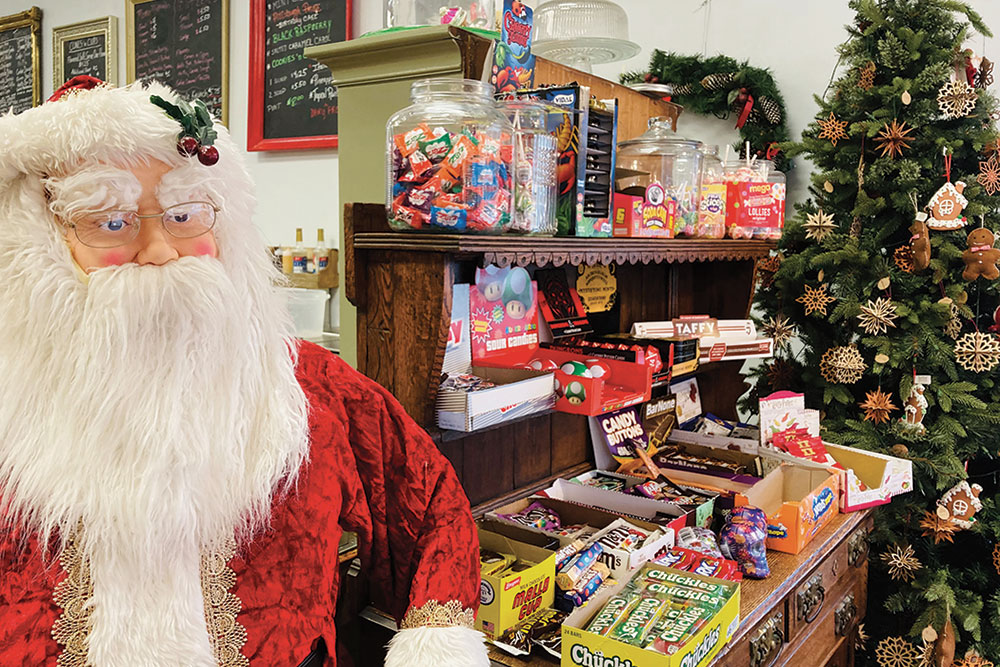 The West Main Street business opened on a sweltering day in August 2019, when everyone was in need of a cool treat. Its debut coincided with the 250th anniversary of the town, which throws a Rockwellian holiday event each November called Santa Claus is Shopping in Town.

That celebration inspired Hoffman, who previously worked in the nonprofit sector and ran a scrapbooking business, to create a winter wonderland in the heart of Monongahela.

“I was walking through town by myself and everywhere I looked there were luminaries and carolers,” she says. “It’s a really special place.”

A few days later, fate provided an early Christmas present in the form of a “For Rent” sign on the vacant space at 260 W. Main St. The storefront is located across from Angelo’s II, an Italian restaurant that’s gained national attention for its giant holiday displays.

Monongahela, it seems, is the new North Pole. 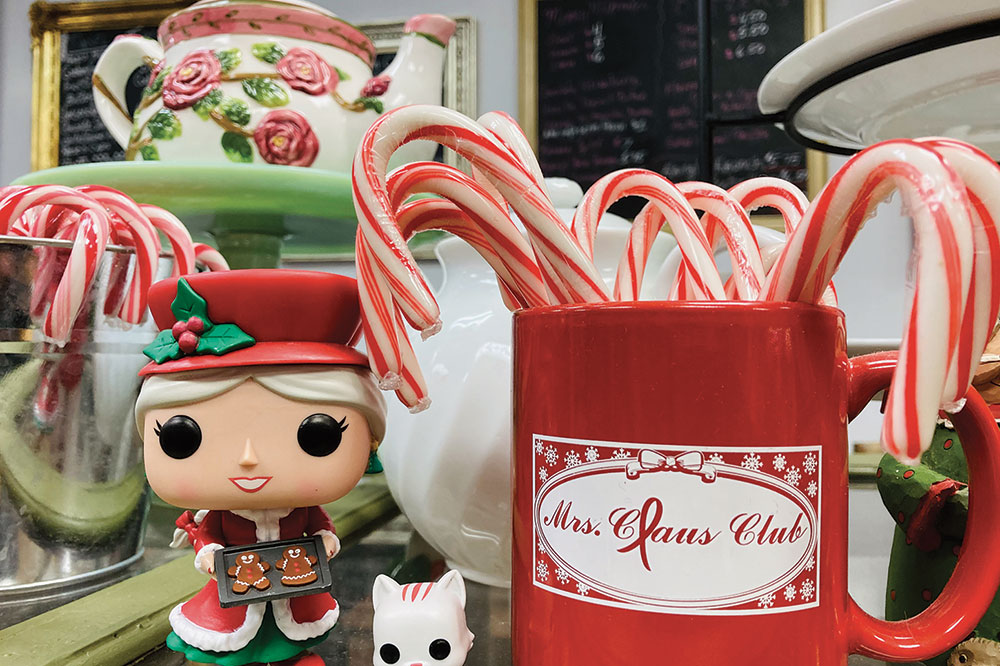 IN ADDITION TO FROZEN TREATS, PATRONS WILL FIND NOSTALGIC CANDY AND ORNAMENTS FOR SALE

With a twinkle in her eye, the rosy-cheeked Jackson smiles and says she regularly indulges in Rudolph Reese’s Revenge, a specialty sundae made with vanilla ice cream, chocolate, peanut butter syrup and crushed Reese’s cups.

Having dessert before dinner will never get you on the naughty list at Mrs. C’s.

Christina Bunner of Washington, Pa., was one of the shop’s first customers and regularly takes her kids there to celebrate good days and to help fix bad ones.

“From the moment we walked in, it was ‘our’ place,” she says.

While she likes to change up her order with each visit, her kids are set in their ways: bubblegum ice cream in a waffle cone for the 8-year-old and a chocolate shake for the teenager.

Even when the pandemic temporarily shut down the business six months after it opened, it couldn’t put a damper on the holly jolly spirit. The family created “Ice Elation” packs filled with pints of ice cream, cones and toppings that customers could enjoy at home.

“People want to be reminded of better times,” she says. “Candy and ice cream are tangible and edible pieces of childhood.” 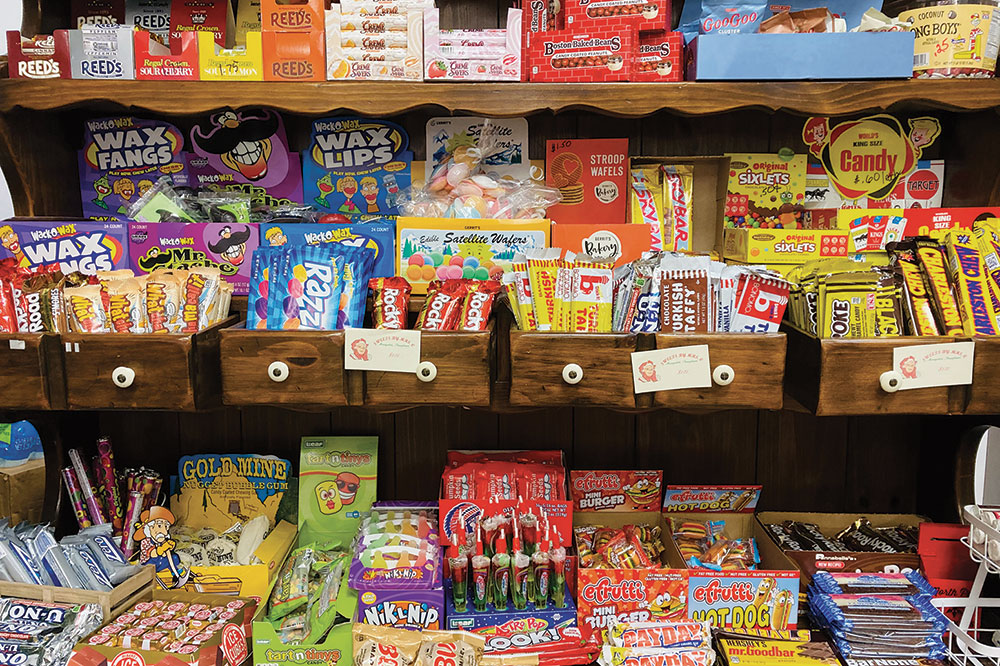 Some of her fondest memories are of Christmases past.

Hoffman’s grandparents ran Warburton’s Furniture in Wilkinsburg and would dress up as Santa and Mrs. Claus while distributing toys to local kids. The couple passed on their love of Christmas cosplay (and charity) to Jackson, who, along with her husband Bill, raised their brood in Charleroi and operated both an Isaly’s in Monessen and a yarn shop.

Jackson still puts her sewing skills into overdrive during the holidays by making nightgowns and old-fashioned duster caps for children to wear on Christmas Eve. A caricature of Jackson in her Mrs. Claus costume — she has both summer and winter versions of the iconic red outfit — serves as the shop’s logo.

Once you step inside the building, you’re greeted by a life-sized Santa statue, brightly lit tenenbaums decorated with ornaments for sale and antique hutches filled with retro confections, from candy cigarettes to Turkish Taffy.

Christmas music, interspersed with pop tunes, plays throughout the day — and the scent of homemade waffle cones fills the air.

“I wanted people to feel like they were coming into Mrs. Claus’ kitchen,” she says, placing her hand on one of the well-worn tables. “I think about all of the pies that have been rolled out here, all the homework that’s been done, all the cards that have been played, and it makes me smile.” 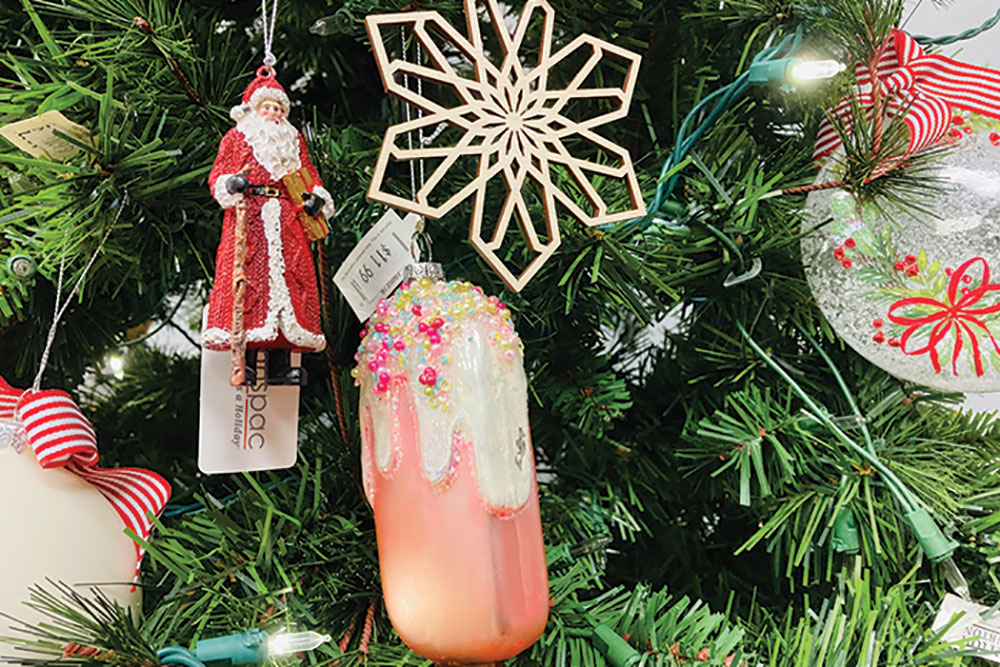 You’ll find Hoffman and her elves humming merrily while scooping ice cream behind a wooden counter discovered on Facebook marketplace. It was already painted red and green. A real sleigh, another serendipitous online find, hangs from the ceiling as if in mid-flight.

The Reindeer Room in the back of the shop is for private parties and community events that are sure to go down in history. Customers are invited to grab a board game from the shelf and sip a float, milkshake, cup of hot cocoa or an old-fashioned bottle of pop.

Sweets By Mrs. C also has two mobile units — each vintage cart holds about 400 cups of ice cream, which Hoffman sells at events throughout the region.

Like St. Nick, she gives back to the community by donating proceeds from the annual Cookies and Cocoa with Mrs. C to her former employer, CASA for Kids, an organization that trains people to become Court Appointed Special Advocates for abused and neglected children in Washington County.

As for her longevity, Jackson attributes it to a trait of her daughter’s.

“Being nice,” she says, placing her hand on top of Hoffman’s. “Heidi has taught me that.”

Playing Mrs. Claus — who she believes is the unsung hero of the season — comes naturally to the nonagenarian.

“She has the biggest heart of anyone I know,” Hoffman says, brushing away a tear. “My mom is my biggest supporter, my biggest cheerleader.”

This article appears in the December 2022 issue of Pittsburgh Magazine.
Categories: PGHeats