How Pittsburgh Food Trucks Adjusted to the Pandemic

Trucks have been making changes to be in compliance with current health standards and still keep their businesses running. 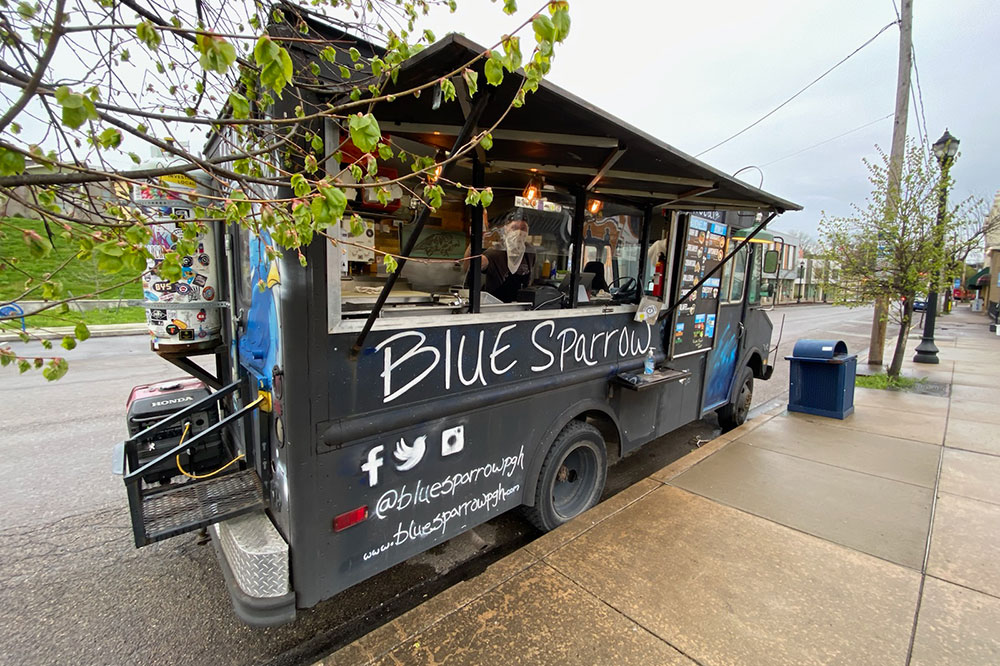 Take-out is the new normal for Pittsburgh restaurants, but that’s something area food trucks have been doing for a long time. In some ways, it gives them a built-in advantage. But with events and festivals cancelled for the foreseeable future, they’re still looking for ways to adapt.

“As a food truck, we were kind of fortunate enough to be set up as an already mostly to-go business, obviously an outside business which means we didn’t have to deal with customers coming inside of our building,” says Luke Cypher, owner and head chef of Blue Sparrow. “The pivot points were really about getting online ordering up [and] choosing menu items that were going to travel well.”

Blue Sparrow serves “global street food,” according to its website, and operates a food truck and food bus; the latter is used for larger events.

Cypher says they still had to make changes to their business model as well as the food truck itself in order to keep customers and employees safe.

“We wanted to be there as a comfort zone,” he says. “Some sense of normalcy in all of this craziness. That’s something that we decided was worth pursuing and continuing to be creative, even if it means we have to put up new Plexiglass in the trucks and wear masks and extra gloves.”

Cypher says one of the biggest changes to the Blue Sparrow business was the lack of big events, such as weddings and festivals, which could no longer be catered.

“We decided we needed to make a switch so instead of taking the truck somewhere where we didn’t know how it would do, we started doing pizza (takeout) nights out of our commissary,” he says. “We’re also very blessed to have this beautiful wood-fired oven in our prep kitchen.” 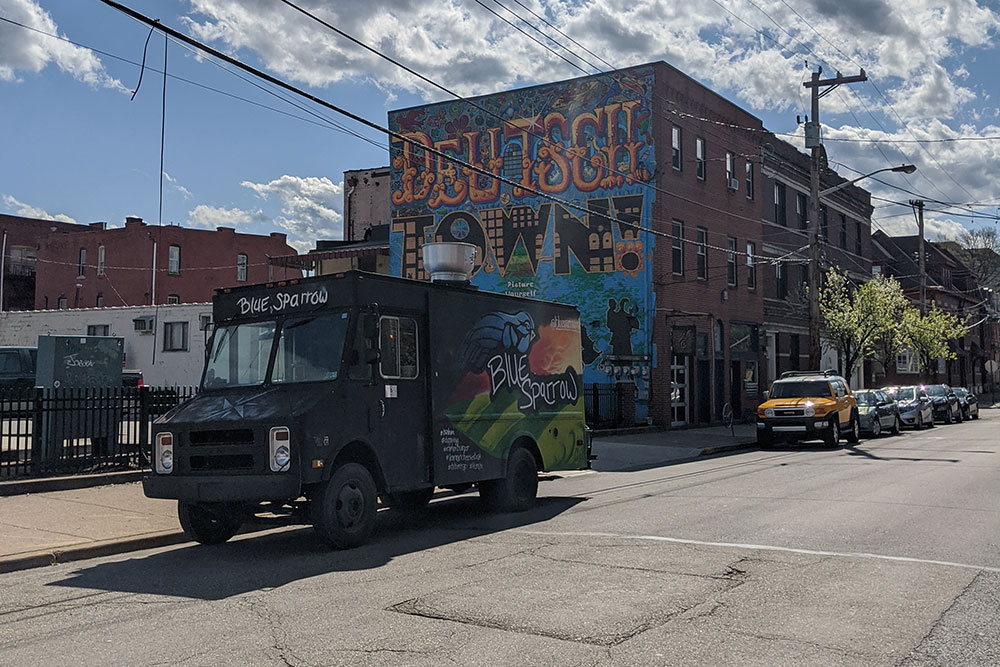 Blue Sparrow’s customer base is mostly a variety of neighborhood residents, Cypher says, who have been supportive of the business throughout this unusual time.

Micheal Carney, chef and founder of Pittsburgh Sandwich Society food truck, says he has also employed contactless ordering and incorporated social distancing into his day-to-day operations, but it took some time to adjust.

This is the truck’s fifth season in business and is home to burgers, fries and, of course, sandwiches. The business also collaborates with various local breweries. 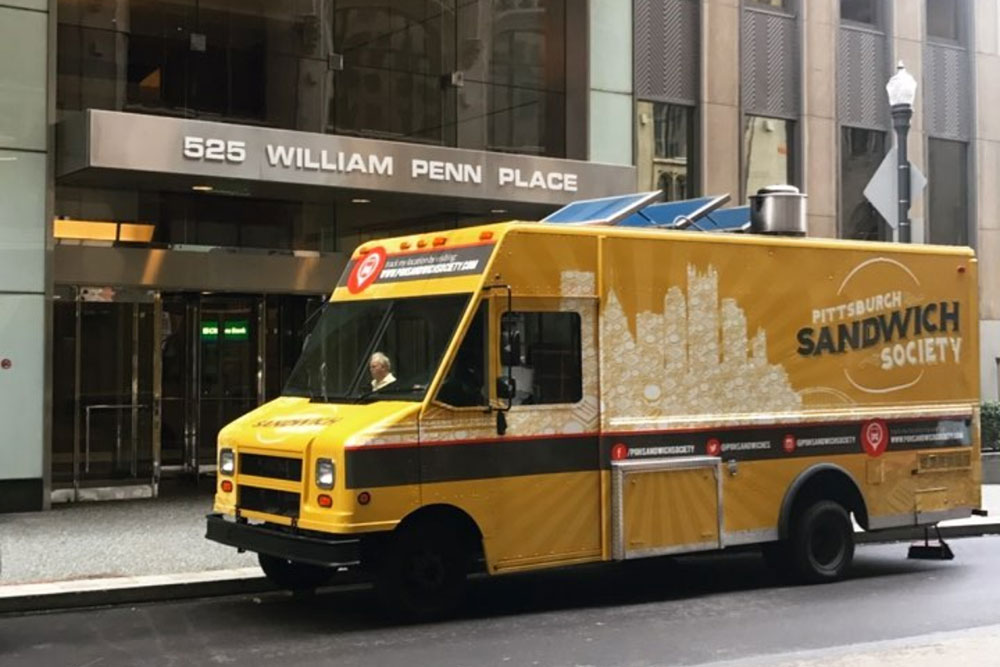 “We had our first weekend, and it was going off great,” Carney says. “Then the following weekend is really when things start to get canceled on 14th or 15th. So, from that point on, events that we have scheduled were being canceled on us so we kind of pulled back and took a break for about a month.”

He says that with the transition into the yellow phase, they have grown into the changes they made. The truck is offering various specials such as fried chicken on Fridays and a burger or special sandwiches on Wednesdays. He also hopes some outdoor dining will be allowed in the near future.

According to its website, customers must fill out an order form and confirm their pick up time and location. Orders must be prepaid and, for now, no substitutions or modifications are allowed on the orders.

“Honestly, our customer base is fantastic,” Carney says. “We have these preordered dinners, we try to and do a manageable amount with the time that we’re allowing ourselves to vend which is anywhere from 130 to 150 sandwiches or items. We’ll sell those out in 30 or 40 minutes online on a Monday afternoon.”

Carney says he thinks the hardest time for food industries will be adjusting to a new normal after collectively experiencing the effects of a worldwide pandemic.

“It’s not even just us deciding we want to do something differently,” he says. “It’s really kind of figuring it out as a whole. I mean, the hardest hit for all of this is that our industry and our business, in general, was very much a community and it was about bringing people together.”

Justin “Hootie” Blakey, owner of Blowfish BBQ, said they are utilizing items such as prepackaged utensils and pre-portioned condiments in an effort to keep customers safer.

“We’re also offering a lot of our sandwiches deconstructed in order to assemble those easier,” Hootie said. 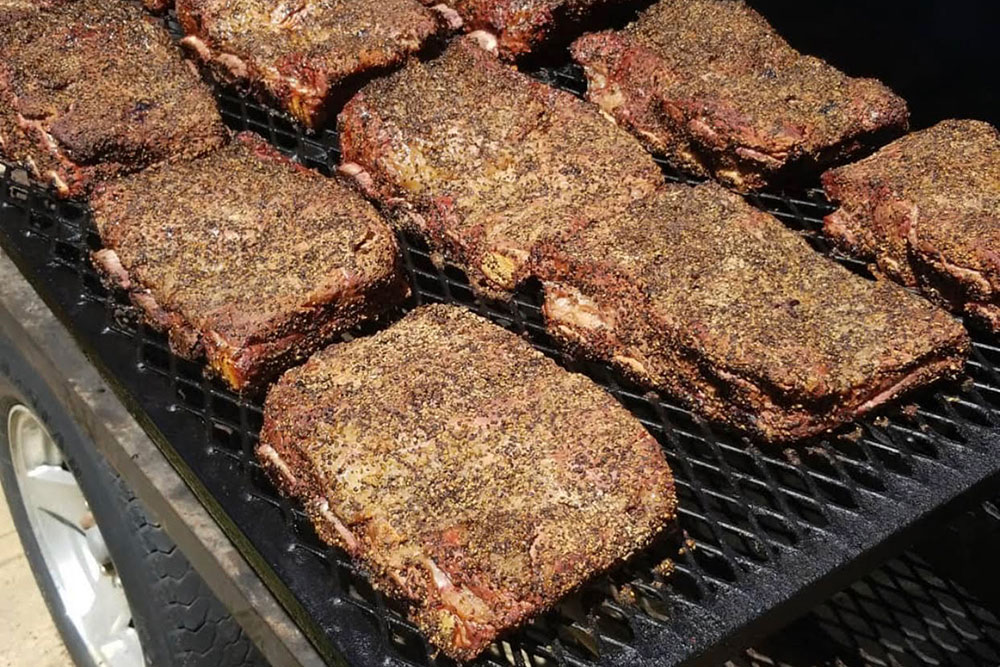 With barbeque, he says, the best business happens in the summer, though he does operate year-round. However, the truck experienced a lot of cancellations with gatherings and at office parks, he says.

“Even though we’re in the yellow level, it’s almost like being in red for us right now,” he says.

Like other trucks, Hootie says they also partner with breweries every weekend, but those businesses have reduced their hours as well.

“There are some breweries that aren’t even letting food trucks into their neighborhoods right now to give the businesses in that neighborhood the opportunity to make money,” he says.

However, the advantage of a food truck during this time is the ability to have a smaller staff, Hootie says.

“All these restaurants had to lay off an entire staff of people,” he says.

Nicki Cardilli, co-owner of The Coop, says she has taken precautions in preparation to open this week.

“We’ve installed a Plexiglass barrier in our serving window,” Cardilli says. “And just making sure that when we do our social media posts, making sure that everybody knows that they’ll have to come to the window with a mask on and things like that.”

Cardilli also says they would prefer credit card transactions rather than cash, they will be using sanitizing bleach solutions on electronics in between orders, and all staff will be wearing gloves and masks.

“I don’t see this going away any time soon, so those changes will remain in place on the food truck,” she says. “Then once our takeout opens, the same precautions will be taken there.”

The Coop has been in business since 2016 and serves a variety of chicken-and-waffles dishes. With the cancellation of events, Cardilli says the truck has definitely been affected.

“When you run a food truck, you don’t just pull up somewhere and park,” she says. “That’s not how it’s done. Things are scheduled with office parts and festivals and there’s a process involved. And changing locations every day, it’s a lot of work. I don’t think it’s necessarily easier than having a brick and mortar (restaurant).”

Despite some challenges, Cardilli says she’s looking forward to being back open.

“The people that have been coming to us over the last three years or so, they’ve been really great about checking in with us, emailing us, calling us, you know, seeing how they can support us,” Cardilli says. “We’ve been getting a lot of offers to come into neighborhoods. One of our customers that we’ve had for three years is just like, ‘Come to my neighborhood there’s like a 100 houses over here.’”