Here’s What a Pittsburgh-Themed Wordle Game Would Look Like

Unfortunately, ‘yinzer’ and ‘jagoff’ did not make the cut. 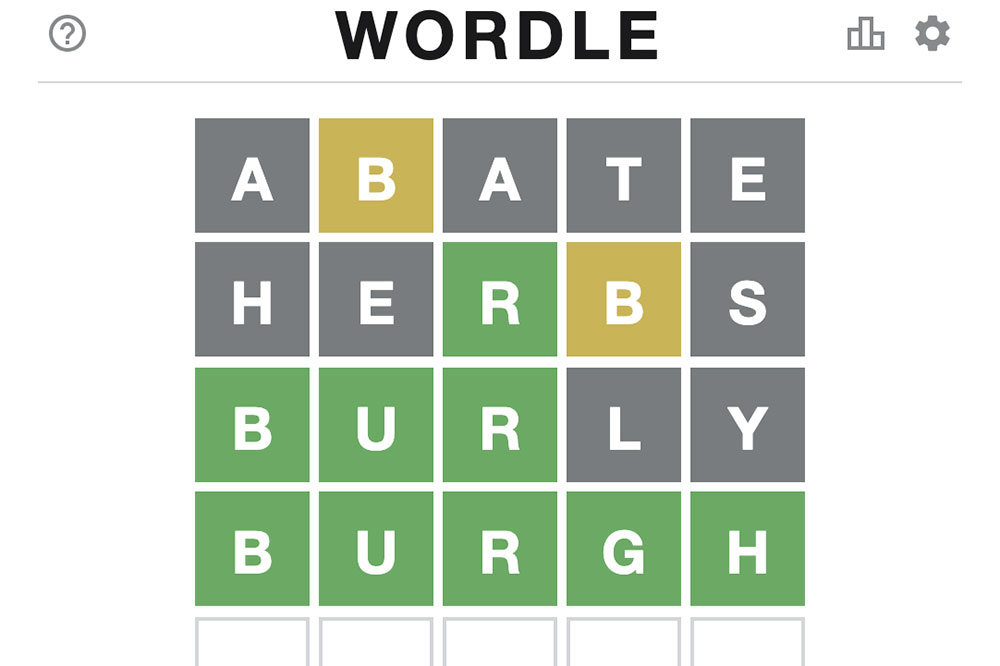 If an array of yellow, green, and gray square emojis have been clogging up your social media timelines lately, you’re not alone. The phenomenon is called Wordle, a word-guessing game similar to the board game Mastermind.

All the hype got us thinking: What if there was a version of Wordle made specifically for our favorite city? What words would be used?

Well, we figured out the answer — and it’s called Pittsburghle.

There are certain Wordle rules that Pittsburghle would follow — namely, the word can be no more and no less than five letters long, which disqualifies the six-letter ‘yinzer’ and ‘jagoff.’ And there are also some Wordle rules it would break — the word can now be an abbreviation, and it can be a proper noun.

Based on those guidelines, here are some of our favorite potential Pittsburghle words based on the city we know and love.

There are a lot of nicknames for Pittsburgh — the City of Bridges, the Steel City, the City of Champions — but none of them has quite a ring to them like The ‘Burgh.

This nickname is instantly recognizable, because unlike many other cities in America, like Harrisburg, Williamsburg, St. Petersburg and even Pittsburg (of which there are surprisingly many), Pittsburgh has a signature ‘h’ at the end of its name. (At least since 1911, when the ‘h’ was restored after losing it in 1891. That’s when the U.S. Board on Geographic Names sought to standardize the spelling of names across the country and forced Pittsburgh to drop its last ‘h’.)

The ‘Burgh is so catchy that it became the namesake of our yearly reader-selected awards, where we recognize the city’s best food, drinks, personalities, entertainment and more. Check out our 2021 Best of the ‘Burgh winners here.

There is probably nowhere else in the United States where people have such strong opinions about ketchup as Pittsburgh.

Ketchup isn’t the only food product manufactured by the Pittsburgh-based H.J. Heinz Company, but it is by far one of their most popular products. In fact, it’s actually the most popular ketchup in the world.

The Heinz family and company’s impact on Pittsburgh shows, from the grants given each year by the Heinz Foundations, to the North Shore’s Heinz Field, to the Heinz-sponsored Picklesburgh festival in Downtown Pittsburgh.

So if you want to impress your Pittsburgh friends at your next barbecue, skip the cheaper generic-brand ketchup and grab a bottle of Heinz.

The Pittsburgh we know today wouldn’t exist without the steel industry of the 19th and 20th centuries. Andrew Carnegie began producing steel in North Braddock in 1875 and formed the Carnegie Steel Company. Henry Clay Frick, the chairman of Carnegie Steel, later led the company to merge into U.S. Steel.

High demand for steel, especially during World War II, allowed Pittsburgh’s large industry to grow both the city itself and its economy. Pittsburgh produced more than 60% of the total steel produced in the U.S. at its peak in 1910.

Nowadays, Pittsburgh doesn’t have any steel mills within its city limits. However, there are still Pittsburgh-based companies — such as U.S. Steel — with operating steel mills in the greater Pittsburgh area.

The influence of Pittsburgh’s great steel economy can still be felt today, in names such as Carnegie Mellon University, Frick Park and the Steelers. Not to mention the long-abandoned steel mills along the rivers — which brings us to our next Pittsburghle…

Three of them, to be exact.

The Allegheny and the Monongahela come together to form the Ohio, forming the unique and iconic triangular shape of Downtown. The presence of these three rivers played an integral role in attracting the steel industry to the city.

These rivers are also a big reason why Pittsburgh has been named the City of Bridges, with a grand total of 445 (down from 446, as of two weeks ago).

This is Pittsburgh’s own kind of word association test — whatever comes to mind first when you see this Pittsburghle says a lot about you.

Longtime Pittsburghers might be thinking of Kennywood, with its roller coasters and river rapids; its Fright Nights and Holiday Lights. The iconic Pittsburgh amusement park will turn 125 years old in December 2023.

Season passes are on sale now — and we know how to get the most out of your next trip.

Pittsburgh sports fanatics and current University of Pittsburgh students might first think of Kenny Pickett, the New Jersey native turned Pitt football legend. Pickett broke several records and landed himself a spot as a Heisman Trophy finalist as he led the Panthers to an ACC Championship in 2021.

Some hope he will get picked up by the Steelers in the 2022 NFL Draft, replacing retiring quarterback Ben Roethlisberger.

If you weren’t a Pitt student in the last five or 10 years, we might need to catch you up: “Cathy” is a term of endearment for the Cathedral of Learning, the second-tallest educational building in the world.

“Cathy” hosts 2,000 rooms, including one-of-a-kind Nationality Rooms that represent a wide variety of countries and cultures. Standing in the heart of Oakland, “she” is one of Pittsburgh’s most famous buildings.

Wherever you stand on the controversy, the Cathedral of Learning deserves recognition — but of course, only “Cathy” would fit in a Pittsburghle puzzle.

Unfortunately, it seems like Pittsburghle is destined to remain nothing more than a dream for now — but with Wordle spinoffs like Taylordle (for dedicated Taylor Swift fans) and Sweardle (for those with a more colorful vocabulary) already taking off, who knows?