From Blue Collar to Hipster, Lawrenceville’s Story is Part of This House

The four-bedroom, single-family home was owned for more than 40 years by the same family with deep Pittsburgh roots. 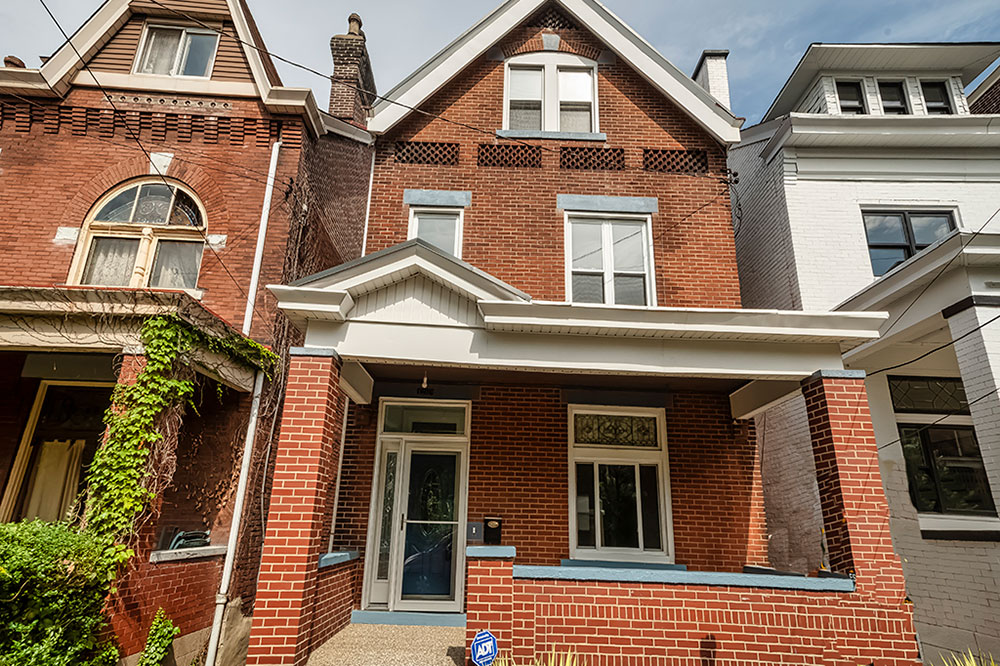 Their story is a classic tale of Lawrenceville’s evolution.

Before Business Insider ranked it among the “Most Hipster” neighborhoods in the world, and before the flippers arrived and the Brooklynites migrated there, Lawrenceville’s main drag was filled with neighborhood bars that served a shot and a beer to blue-collar workers who stopped in before heading home.

Dan and Mary Alice DeVinney have lived there all their lives — as did their parents before them.

“I grew up on 44th Street and Mary Alice lived on Main Street,” Dan says. “After we had kids we needed a bigger home.” 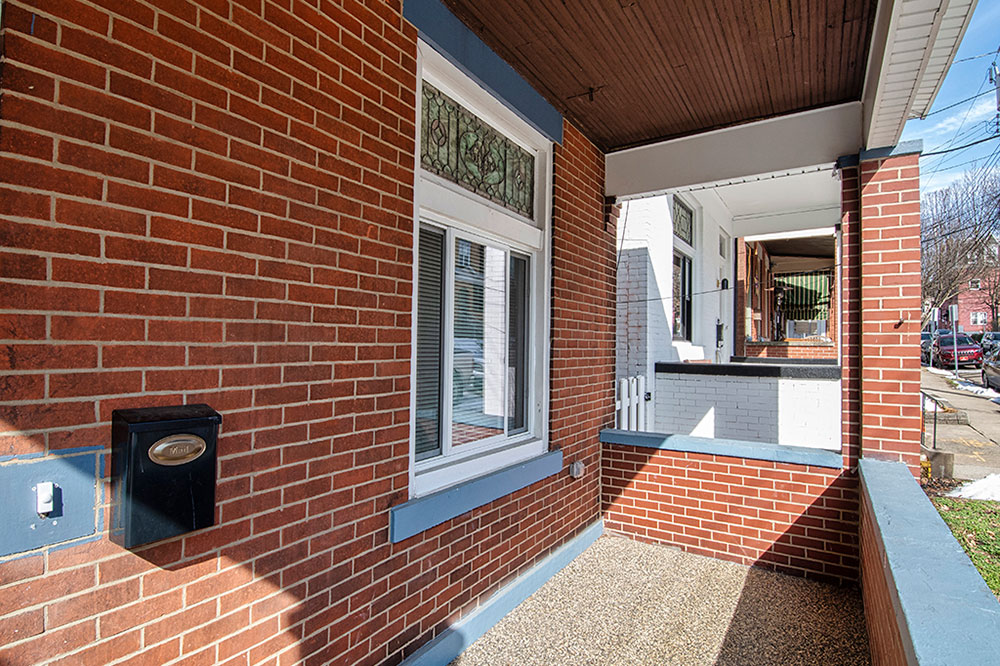 They looked at more than 50 houses around Pittsburgh, but, “There was not a lot for sale in Lawrenceville then,” Dan says. The couple became discouraged in their search.

“I will never forget it. I told Mary Alice, ‘I’ll be honest, I don’t want to leave Lawrenceville.’ She said ‘Thank God, neither do I!’”

Then they found their perfect home at 4209 Sherrod St.

“Danny’s parents lived at the end of Sherrod and mine were still on Main Street,” Mary Alice says. “We bought it off of a Pittsburgh fireman, Joe Picasa.” 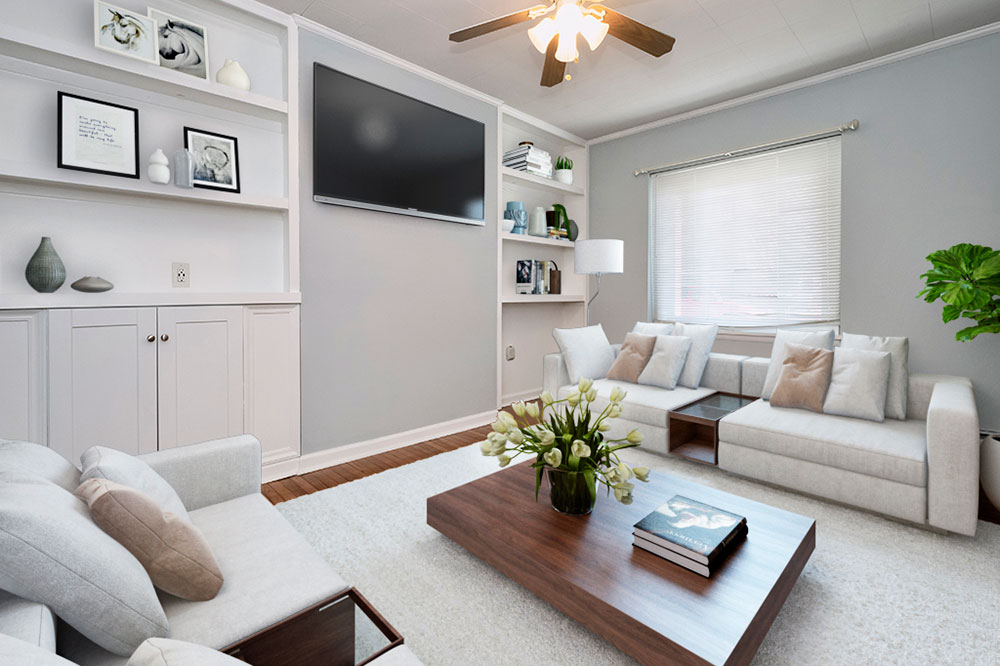 That was 40 years ago. The couple raised four children in the four-bedroom home,which is now on the market for $549,900 (MLS# 1573957, Lori Hummel, Howard Hanna Real Estate, howardhanna.com). It is open by appointment.

Built in 1900, the all-brick, three-story house features a nice front porch and some original stained glass. When the couple purchased it, the home had paneled walls, old carpets and too many coats of white paint on the wood, marring the beauty of the century-old home. 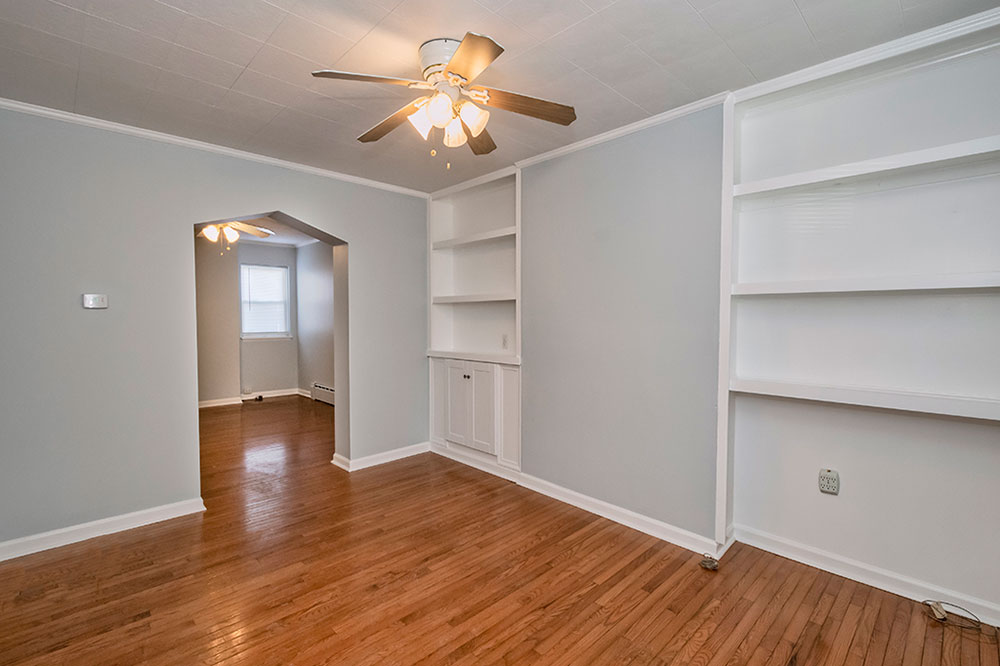 It took 10 years before the DeVinneys said they could do a major remodel on the home. Taking it one floor at a time, they removed drop ceilings, installed built-in bookcases and put down all new floors.

“You could not sand the floors, that is why we installed ¾-inch oak throughout,” Dan says. 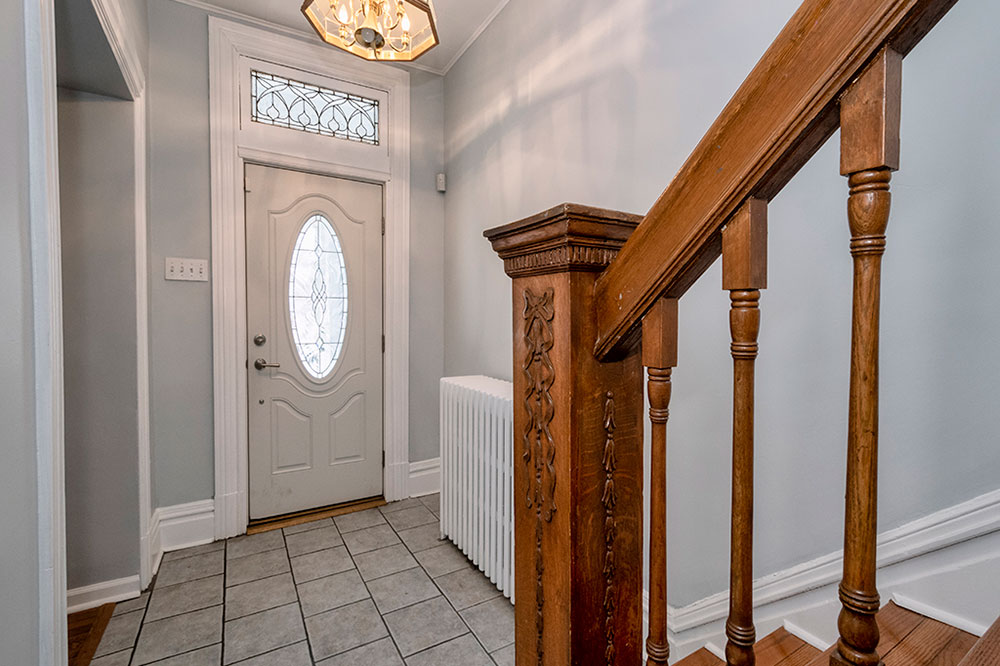 The couple hired a professional to restore the ribbon-detailed, carved wooden stair banister.

“It had seven coats of paint,” Mary Alice recalls. “You could not even see the carved detail in the newel post.”

They decided not to create an open floor plan, preferring the original layout. The living room is 11-by-14-square feet and the dining room is 12-by-14 square feet. 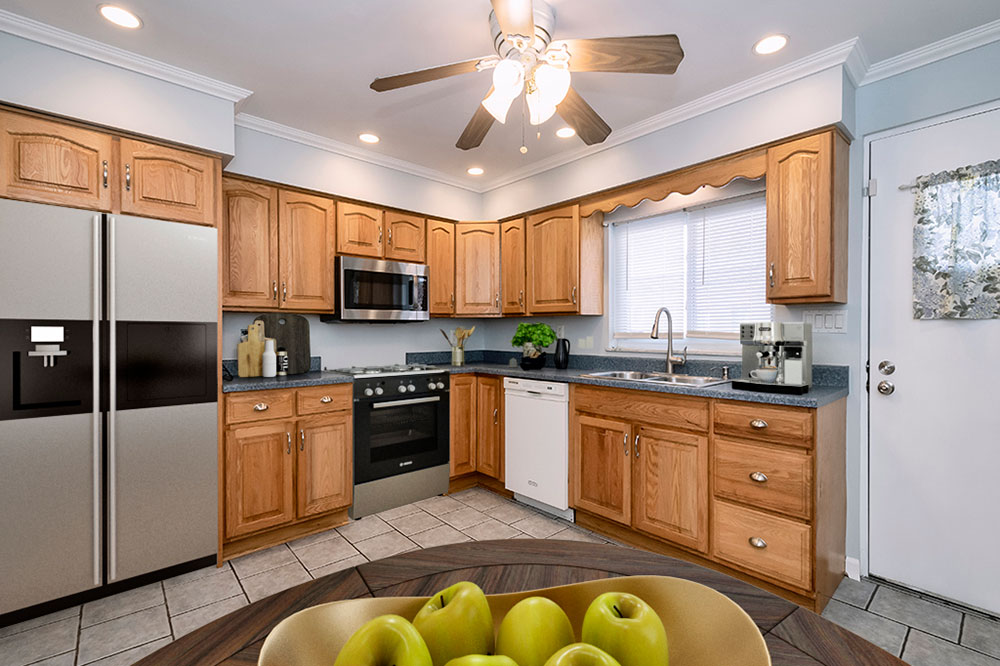 In the kitchen, significant changes were made.

“It had white cabinets that were painted. They were particleboard. The walls had wallpaper and a chair rail,” Mary Ann says of what the kitchen previously looked like.

The couple installed wooden cabinets, porcelain tile floors and a banquette in the corner as a smart way to save on floor space. It also has cabinets under the seat for additional storage. They also removed a pantry and installed a much-needed powder room in its place. 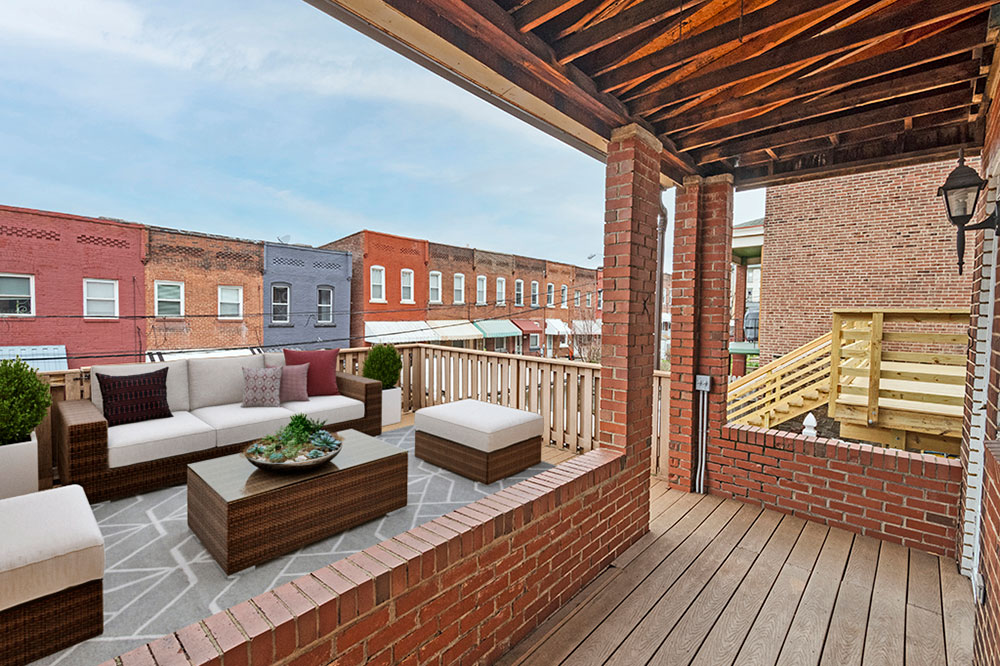 The outdoors has a large deck with a generous seating area and great views of Downtown. The couple also installed a set of steps to a lower-level deck, where there’s a hot tub and a swimming pool with its own heating system, which extended the swimming season for their kids.

“The hot tub is staying with the house, I just had a new motor installed,” Dan says. “It is really nice. I used to use it all the time.” 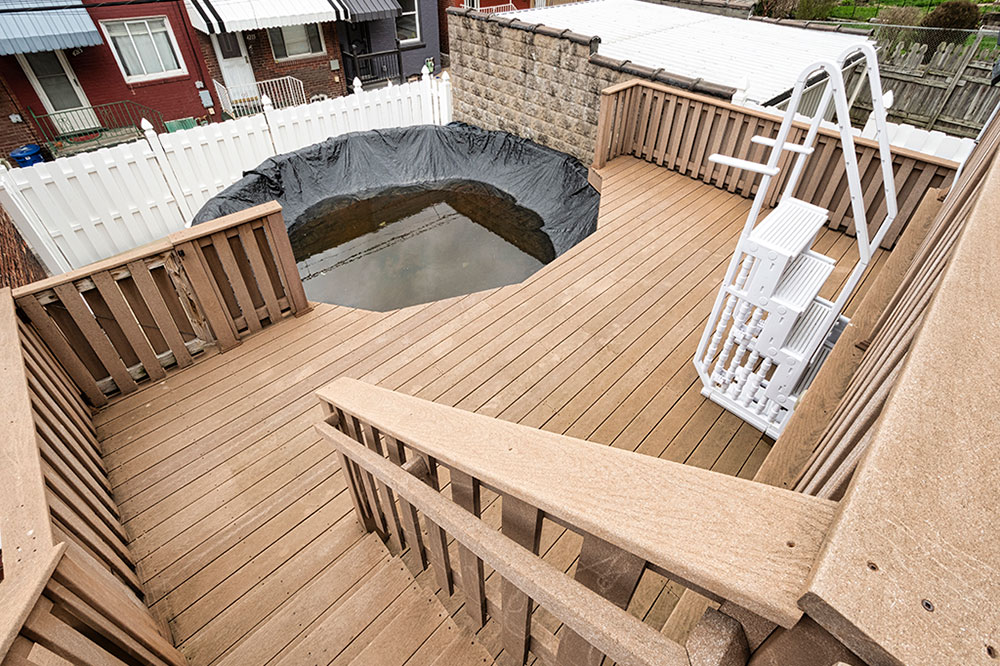 The second floor has all new windows, two bedrooms and one large, full bathroom. The carpeted bedrooms have plenty of closet space and feel even more spacious thanks to the 9-foot-tall ceilings that were exposed after the drop ceiling was removed.

The full bathroom has a jacuzzi tub, free-standing shower and a walnut vanity with granite top. Hiding behind a pair of mirrored sliders is a laundry center with full-size units. 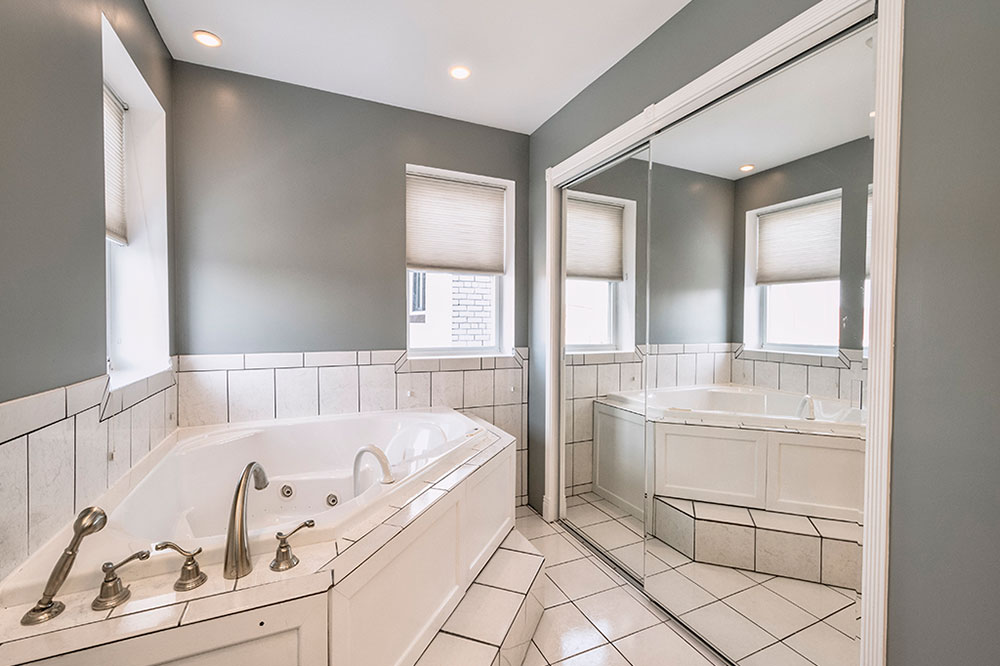 The basement was extensively remodeled. The couple installed a sump pump, French drain system and completely waterproofed the space. There’s a tile floor, built-in bookcases, fireplace and a big-screen television.

“We built it as my man cave, then the teenagers took it over,” Dan says with a laugh. “Behind that, there is a mud room with an extra refrigerator; Their friends were always here, and you always need more food.” 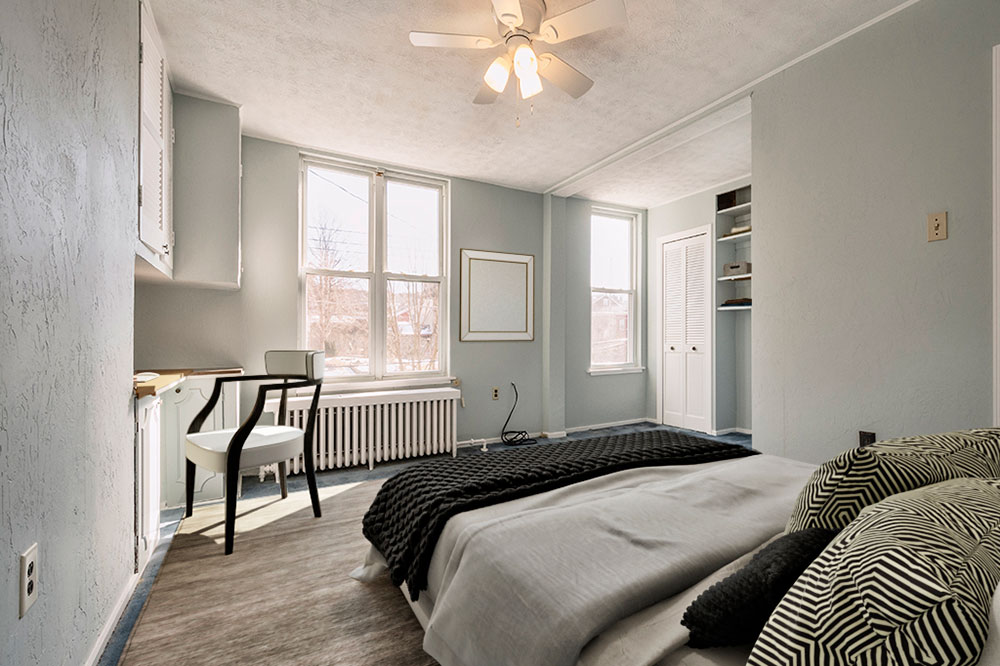 The home has radiator heating and no central air. Although they use air conditioners in the window for a few months out of the year, the couple says the home’s cross breeze keeps it very cool. Other improvements include a new lifetime metal roof with a transferable warranty. The couples also had the brick exterior repointed three years ago; The entire interior was painted light gray before the sale.

“We would have never left if our kids didn’t move out,” Mary Alice says. “What really made it hard to move are our neighbors on Sherrod Street. Lots of young families have moved in,  and they were great. It was even tougher to leave. My sister still lives there.”

About: Lawrenceville (lunited.org, lvpgh.com)
Population: 10,100
Planes, Trains & Automobiles: A 27-minute commute to the airport. Daily transport via Pittsburgh Regional Transit. Rideshare, street parking and bus lanes.
Schools:  City of Pittsburgh, featuring magnet programming, including CAPA in the heart of Downtown. (pghschools.org)
Neighborhoods: One of the country’s most popular neighborhoods, Lawrenceville is divided into Upper, Central and Lower Lawrenceville. The business district extends along Butler Street from 35th to 62nd streets and features everything from award-winning restaurants to trendy boutiques and art galleries. The bustling walking community, which is close to riverfronts and walking trails, draws visitors and residents from coast-to-coast. The housing is a dense mix of row houses and Colonial- and Victorian-style homes, including many with rooftop decks to take in the views of Downtown.