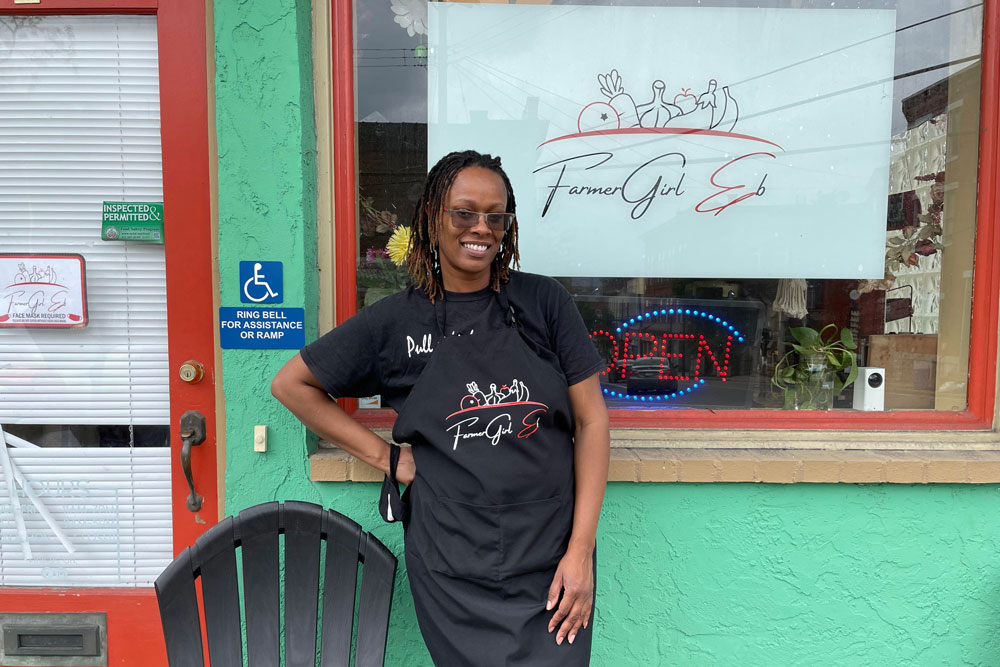 Last year, Ebony Lunsford-Evans launched a food-focused business, FarmerGirlEb, inspired by two overlapping missions: to grow and sell vegetables in underserved areas in the West End and North Side; and to empower others to feed themselves, by teaching them how to raise their own crops at home and in community gardens.

Now, she’s expanding her undertaking with a small FarmerGirlEb store in the West End. “I knew the vision for where this was going. But I didn’t want to rush it,” she says. “And now everything is moving as smoothly as it could go.”

Lunsford-Evans took over the former Paper Moon Market on Noblestown Road and is transforming the space into something akin to the farm markets you might find while driving around suburban and peri-urban areas surrounding the city. “My aim is to take that idea and bring it into an urban atmosphere,” she says.

She’ll do it by giving priority on her shelves to women entrepreneurs. “I want to create what I call ‘one sound,’ with businesses working together intentionally,” she says.

Lunsford-Evans opened the store last week, and even though it’s still in a state of transition, there already are racks teeming with seedlings and a produce case filling up with locally grown goods.

In addition to the produce cases, which will grow in variety as we get deeper into the season, Lunsford-Evans is selling locally made goods from Sweet P’s Bakery, Chaka’s Cookies, Joyous Butter by Janet, Third Day Soaps and Garden, Northern Scents Candle Company and Aesthetics by Theresa. She plans to add honey, jam and value-added products such as syrups, tinctures and salves.

Once the store is running full-steam — Lunsford-Evans has a full-time employee starting on June 1 — she’ll be back outside, growing food in Sheraden and at a new space, Food For The Soul Community Farm, in Manchester. She’ll raise crops for the store and community organizations; both locations also will function as teaching spaces.

Lunsford-Evans’ prior career was in education, and that’s a big part of what’s driving her now, too. She’s already mentoring a new generation of farmers, such as Brittany Beauford and Jessica Williams of Am Good, LLC; the duo plan to grow greens for the store as well as West End communities.

“I have to be outdoors growing food. And I need to teach other people how to do the same, too,” Lunsford-Evans says.