The owner of Arnold’s Tea spends his time connecting communities and working to empower a new generation of Pittsburghers. 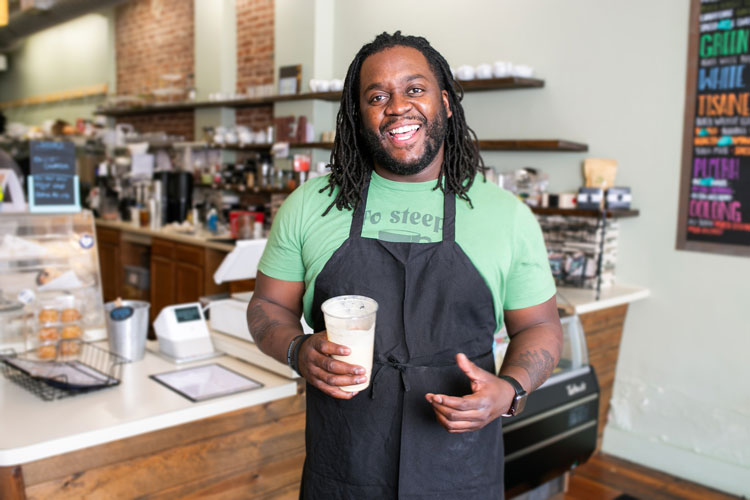 Claudy Pierre is one of Pittsburgh’s most accomplished chefs, but he doesn’t spend much time in restaurant kitchens. You’re more likely to see the owner of Arnold’s Tea on the North Side connecting a nonprofit board member to a developer in the cafe’s bright, spacious sitting room or helping a DJ get ready for a showcase performance in the evening.

If you catch him cooking, it’s likely he’s doing it while mentoring kids. In March, for example, his ebullient support for his team of three high school students echoed off the back walls of the Father Ryan Arts Center in McKees Rocks as they won the Steel Chef Challenge. He’d helped the novice chefs prepare a three-course meal, plus two mocktails, at the culmination of a 10-week culinary training program.

The more he does, it seems, the more energy he has. 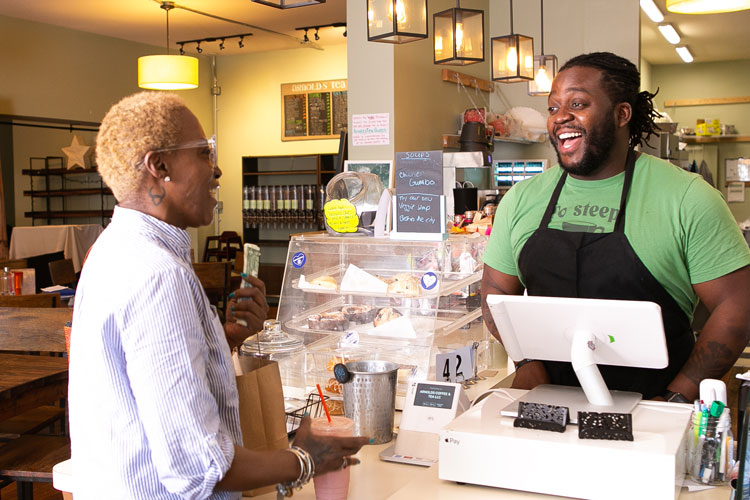 In addition to owning Arnold’s, the 34-year-old Pierre runs a catering company, Eminent Hospitality Solutions, and is the founder of The Empowerment Awareness & Training (E.A.T.) Initiative; the nonprofit aims to lift food vulnerable families through hospitality and culinary training programs, cultural workshops and live performance events. Pierre is on the move six days a week — sometimes seven — between his tea shop, teaching engagements, catering gigs and a community leadership role serving on the Pittsburgh Food Policy Council steering committee.

Pierre was born in Brooklyn and came of age in Trenton, N.J. One of nine kids, he was a standout athlete, earning several scholarships for his prowess on the football field. But poor grades and poor behavior cost him those scholarships and, for a moment, Pierre was rudderless. A trip to Pittsburgh to visit the now-closed Le Cordon Bleu cooking school Downtown changed that. “I came through the tunnel, and the city opened up. I looked at my mom and said, ‘We’re doing this.’ I always liked the Steelers, so that was a perfect plus.”

While his classmates were taking their time to get settled, 18-year-old Pierre, on his second day in town, applied for and landed a job at the hottest restaurant in the city — Greg Aluzan’s Steelhead Grill at Marriott City Center. Aluzan later brought Pierre with him in 2004 as part of the opening team of Eleven Contemporary Kitchen in the Strip District; shortly after, Pierre was recruited by Yves Carreau to work for his Big Y restaurant group, which at one time operated Seviche, Sonoma Grille, Nola on the Square and other establishments. “He was my mentor for a long time,” Pierre says, noting that Carreau encouraged him to learn to work front of house, too.

Pierre moved back to New York when he was 23. He was rising the management ladder at the famed Waldorf Astoria hotel, but things didn’t go as planned. “I was making the most money of my life. I had a prominent job. So I lost my mind [partying] a bit too much,” he says.

He also was a new father, and so he decided to return to Pittsburgh for a job as the assistant general manager at the new Hyatt North Shore. During his tenure there, he found inspiration in the Kansas company Lodgeworks, which at the time was a small hotel management company and since has gone on to run high-profile boutique hotels.He also looked to his faith, and his community at Mt. Ararat Baptist Church helped connect him to catering gigs during the early days of Eminent Hospitality Solutions.

All was on the upswing until 2016 when he earned, he says, “A $200,000 Doctorate Degree in Failed Restaurants.” He’d started Culture, a modern American restaurant and lounge, with high hopes, thinking his energy would help bring more diversity to Downtown dining. Undercapitalized, stuck with a poorly negotiated lease and a building that was in need of repairs, Pierre decided it was better to pull out of the project rather than continue to lose money.

“You have to fail. It’s the only way to learn the things that can’t be taught,” he says. 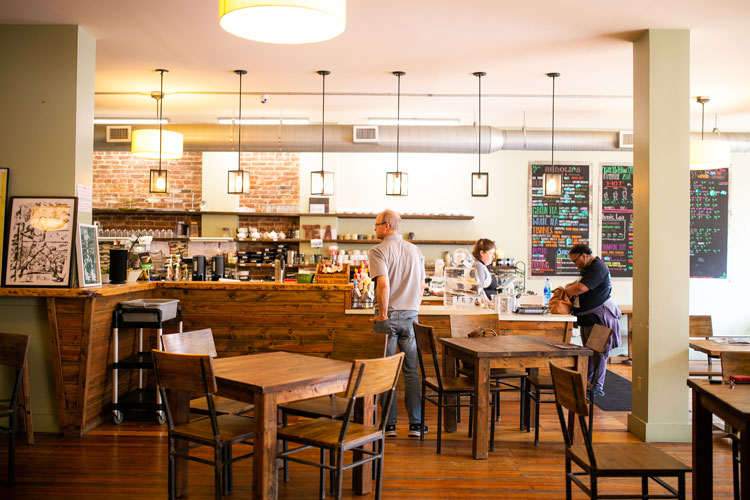 He applied those lessons two years later when he purchased Arnold’s Tea Shop on the North Side. The bright, breezy teashop, spread over two East Ohio Street storefronts, was founded by retired educator Verna Arnold in 2015. By 2018, she was set to retire, and her children asked their friend Pierre to take over.

“She was an old-school black grandmother. When it was time to close, she’d click the lights and throw you out,” Pierre jokes.

Pierre has bolstered Arnold’s vision of turning the tea shop into a community hub and a catalyst for the neighborhood. On any given day, nonprofit organizations, community organizing groups, developers, longtime North Side residents, kids and grandparents all spend time in the shop. There is even a group of Chinese students from Carnegie Mellon University who hold monthly high tea ceremonies. “It feels like a living room in here. The music is good. The vibes are good. I might have one of the most diverse spaces in Pittsburgh,” Pierre says.

He’s added value by using the building’s kitchen for catering operations. “By day, I like to operate like a Jimmy John’s. I’m trying to book as many corporate lunch catering jobs as I can. That’s what’s going out the door. But in the space here, it’s all about community,” he says.

His longest-lasting success, however, may be how he’s paying it forward to the next generation of Pittsburghers. “I love my bros like Kevin [Sousa, who he worked with at Steelhead Grill all those years ago]. They’re doing smoke and foam and everything like that. But my people aren’t there yet. Let me get them to cut their fruit and veggies ahead of time. Let me get that groundwork done so it’s not canned food and Oodles of Noodles,” he says.

To that end, he visits Pittsburgh-area schools several times a month teaching through cooking demonstrations. He works with a cohort of youths in Homewood on Saturdays; the goal of that program is to prepare those students to become hospitality professionals themselves. Part of his mission on the Pittsburgh Food Policy Council is to change the paradigm with the way food is treated in the inner city. “We need to get the urban schools into food summits. We want to connect the dots between farmers and schools in the inner city,” he says. 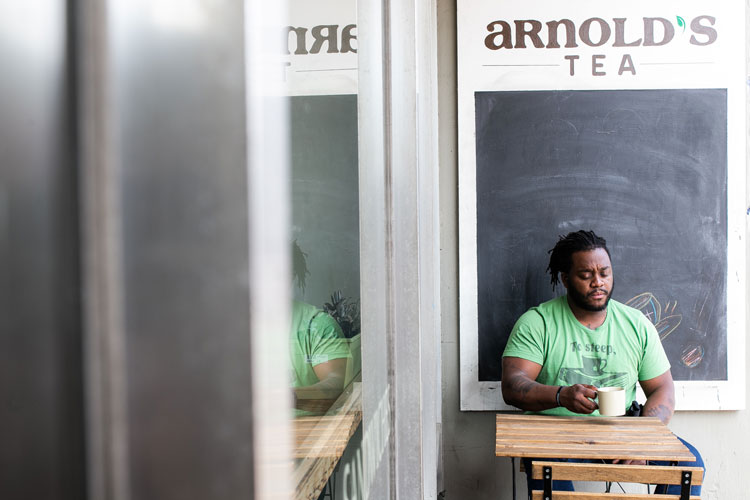 He teaches simple, straightforward recipes such as pico de gallo, stir-fry and alfredo sauce. And he helps kids learn strategies to have fresh, healthy food at their fingertips. For example, he says, if you sit down once a week, cut a variety of fruit and store it in the freezer, you’ll always have healthy snacks on hand. Even better, he says, “Ask your mom, your grandma to sit down for an hour and do this with you. All along you’re getting to know them better.”

His other strategy is to help his students learn in a way that’s most effective for them. “You give them a ditto, a worksheet, and they’ll never do a survey. Never. But if I have them use their social media to quantify what they’re doing, they’re into it,” he says.

An avowed lover of social media himself, he’ll have them take a video or a selfie with their recipe and then share it in a group chat or photo challenge. That, he says, turns students who otherwise might want to slack into eager participants.

“You can’t have corny stuff. They know. And you have to fully immerse yourself. They can feel that.”