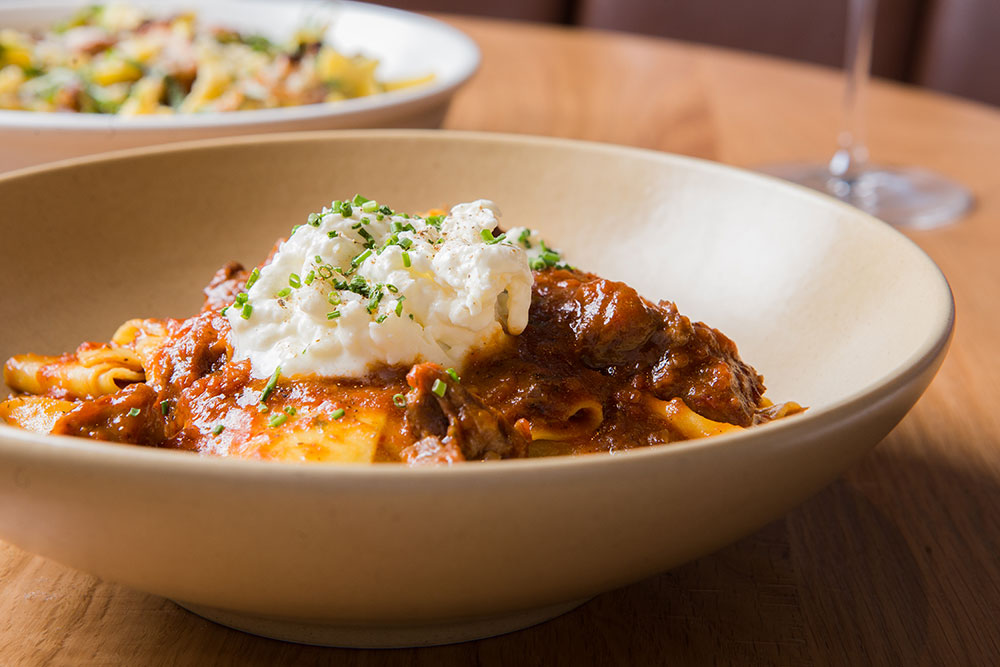 Click on the restaurant you want to check out first or continue scrolling through the entire list. 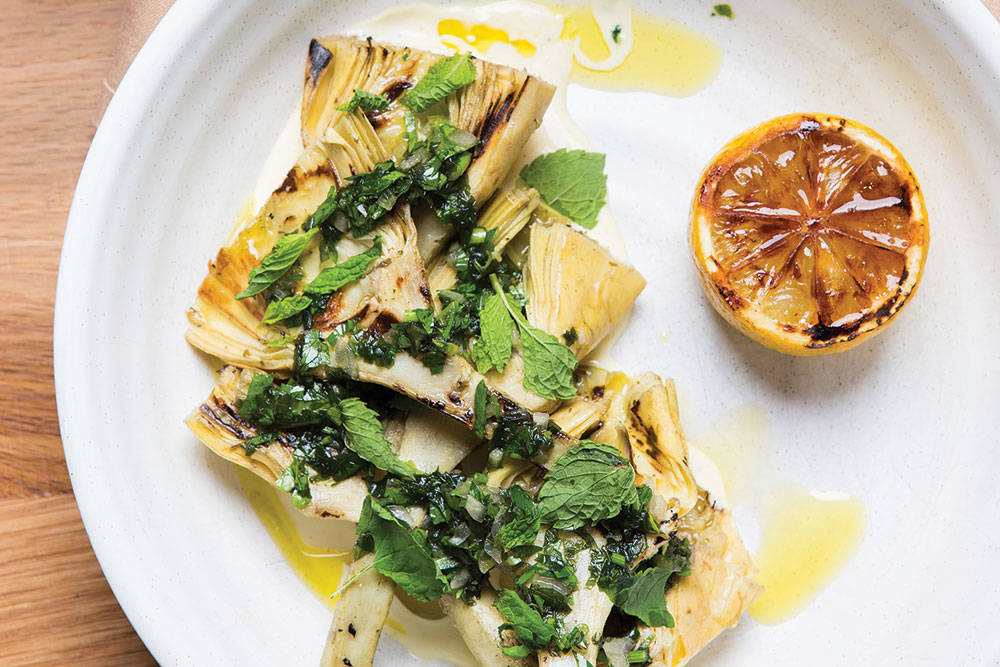 big Burrito’s Alta Via opened in O’Hara Township in April. In my September review, I heaped praise on Executive Chef Ben Sloan’s vegetable- and pasta-forward menu; with dishes such as radiatori with Elysian Fields lamb, mint, Calabrian chilis and pecorino. The kitchen continues to shine several months later. General Manager Jennifer Johnson oversees one of the region’s best front-of-house teams; service at Alta Via is personable and attentive, but not so in your face as to interrupt the flow of a meal. The establishment has an outstanding bar program, too. I dig the spins on classic cocktails, non-alcoholic cocktails and the wine list, as well as the overall design of the offset bar space. In my opinion, Alta Via is the best suburban restaurant opening we’ve seen in many years.

Moving Forward:
I’d love to see Sloan and his team keep their feet on the gas. It’s easy to coast at a place such as this one, but it would be a shame not to keep pushing forward. 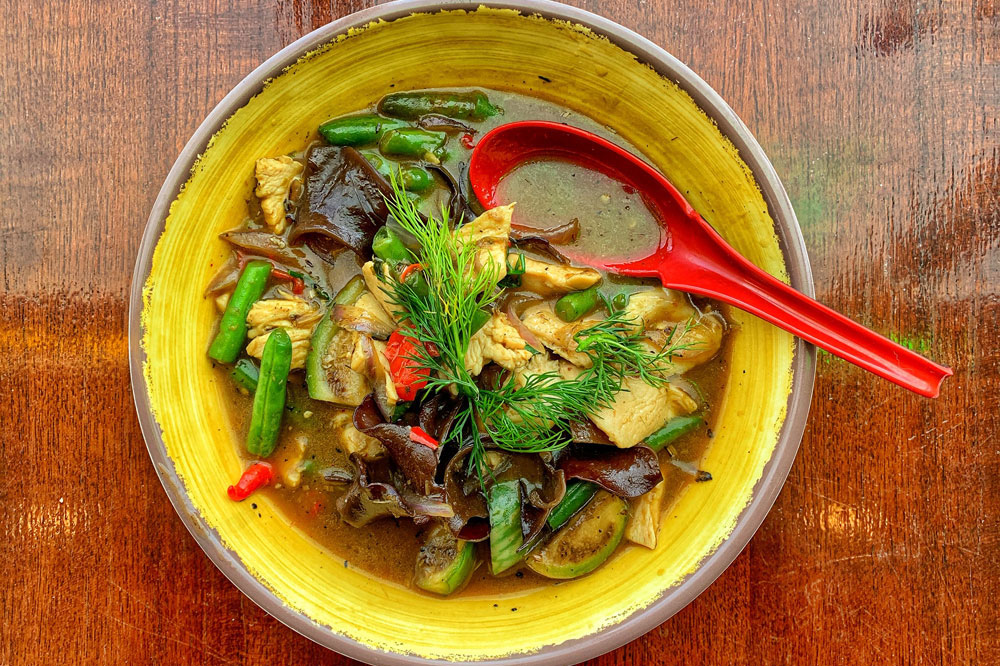 In November, Pui and Norraset Nareedokmai transformed their former Bangkok Balcony space into Pittsburgh’s first Lao restaurant, Kiin Lao & Thai Eatery. Working with Seng Luangrath, the Washington, D.C., James Beard Award-nominated chef and leader of the Lao Food Movement, the couple isn’t holding back when it comes to embracing the pungent, herbaceous and bitter flavors of Lao cuisine. I’m glad. With a menu full of dishes such as laab, naem khao, thum som and orm, Pittsburgh has the opportunity to be at the forefront of a growing food movement in the United States. The vibe is terrific, too — Henley Bounkhong, a Lao artist from Maryland, festooned the walls with colorful depictions significant to Lao culture.

Moving Forward:
This one goes both ways — I hope the Nareedokmais keep up with their commitment to preparing the cuisine as it ought to be made, and I hope that Pittsburgh embraces a restaurant that is serving dishes that highlight Lao flavors and textures. 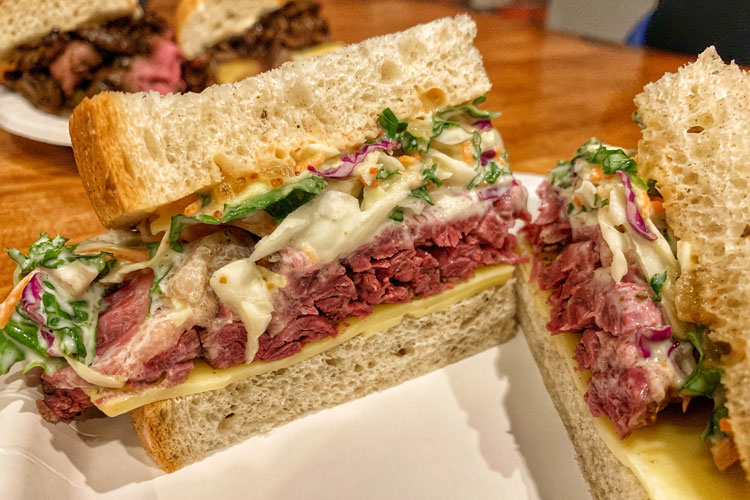 I love a proper hidden gem. Sålł, Blair Hohn III’s lunchroom, located deep inside the global supply chain and manufacturing business TMD Holdings, fits the bill. Hohn opened to the general public in May; he’d previously run the little space on an industrial block in Oakland as a cafeteria for TMD employees. Hohn is preparing stepped-up versions of American classics such as corned beef and pulled pork sandwiches, fried chicken, pot roast and chicken pot pie with the scratch-made love that made them classics in the first place. His rotating menu, which features many recurring specials, is posted online weekly on. (Hohn is refurbishing the space; he anticipates an early-spring re-opening.)

Moving Forward:
I wouldn’t mind seeing a few lighter dishes on the menu. Hohn’s comfort cuisine tilts a little too hard to rich and heavy meals. 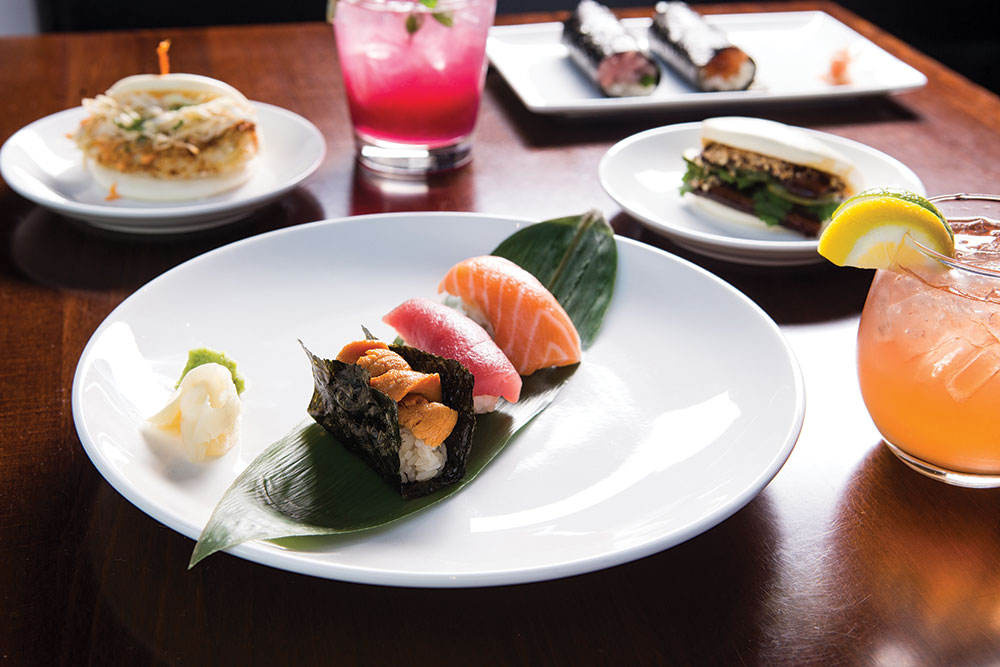 I dig that Alex Tang pays attention to the little details. The chef and owner of Mola in East Liberty cooks his rice — essential to outstanding nigiri — al dente and delicately seasons it with salt and aged vinegar. His fish is well-sourced and served with barrel-aged soy sauce and real wasabi. He forgoes over-the-top rolls in favor of delicate hand-rolls which are wrapped with high-quality nori. All of it makes for a new (Editor’s Note: Mola opened at the end of December 2018, too late for inclusion on last year’s Best New Restaurants list) fish-forward establishment that has me jazzed for sushi in Pittsburgh. Not in the mood for sushi? Mola’s dumplings and bao are terrific, too. 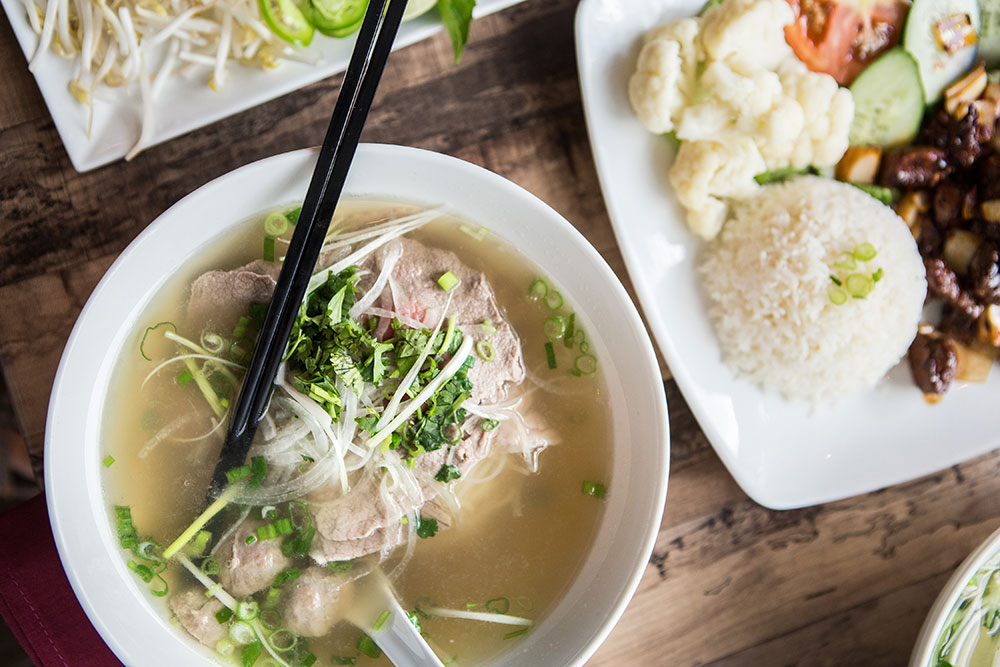 With the opening of Two Sisters Vietnamese in January, the outlook for Vietnamese food in Pittsburgh improved. Run by Trinh Phan (Phan’s sister, Trang Somphomaphakdy, is no longer with the business), the restaurant is a destination for pho, Vietnam’s preimentant noodle soup. I like Two Sisters beef pho for its warmly spiced broth and the chicken pho for its restorative powers. There are some other tasty menu items, too — shaking beef, an easy-eating wok-cooked dish with soy sauce umami and onions, is a crowd-pleaser. Daikon and carrot salad is a peppy side dish.

Moving Forward:
There was talk early on that the menu might be expanded to include more Vietnamese dishes, including desserts. I’d love to see that happen. 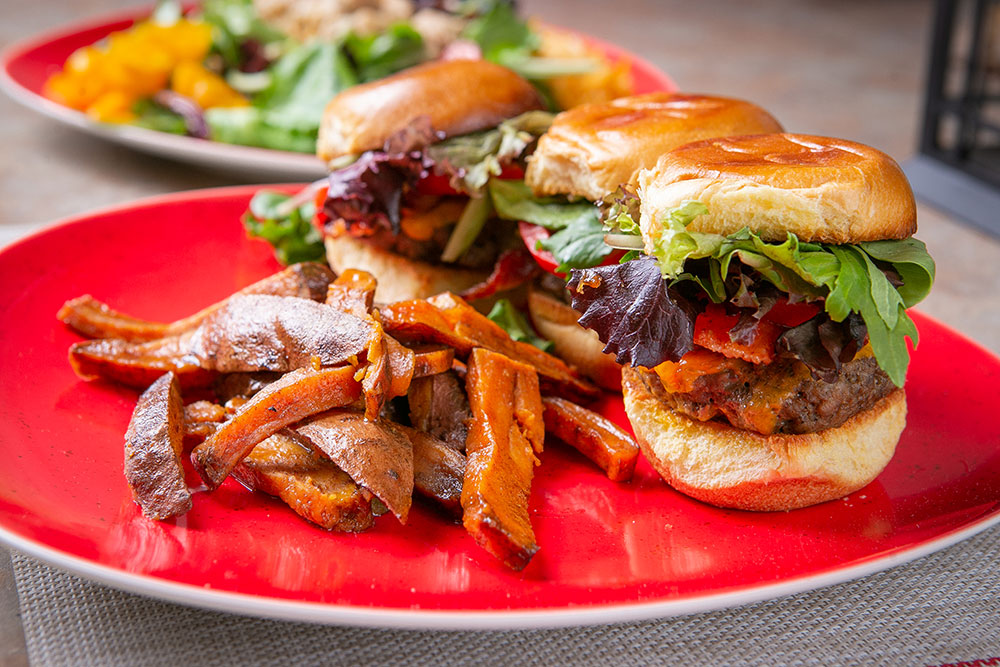 Jackie Page-Heidelberg grilled hot dogs as a teenager, fabricated automobile parts for General Motors as a young adult and managed restaurants and banquet services after that. When she was 47, Page-Heidelberg attended culinary school then operated a catering service for a few years. In February, she brought a much-needed option for scratch-made food to McKees Rocks when she opened Love Rocks Cafe. Page-Heidelberg serves breakfast and lunch from her outpost in the Sto-Rox Library at the Father Ryan Arts Center. Looks for comfort food such as sandwiches, shrimp and grits and meatloaf and sides such as green beans, macaroni and cheese and potatoes. Page-Heidelberg’s effusiveness is another reason to visit.

Moving Forward:
I’d love to see Page-Heidelberg continue to refine her comfort food dishes such as the Turkey Devonshire. 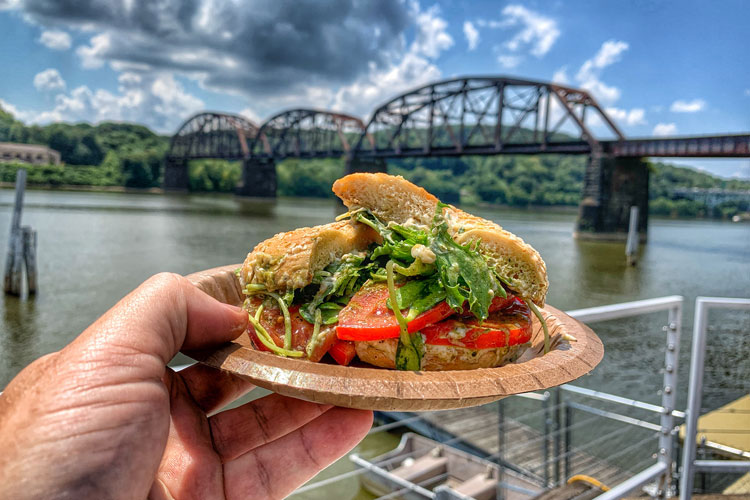 Here’s a recipe for a lovely daytime meal: combine a sincere commitment to supporting local foodways and a stunning riverfront view. That’s what you get at Farmer x Baker, Jennifer Urich’s casual breakfast, lunch and brunch eatery in the tranquil oasis of Aspinwall Riverfront Park. Urich’s Root and Heart farm is the source of edible flowers and vegetables, and nearby Tiny Seed Farm, Dillner Family Farm, Frankferd Farms and Freedom Farms products also are used in salads, sandwiches, tacos and more. Farmer x Baker is taking a break for the colder months but will return in April, when dinner service will be added. 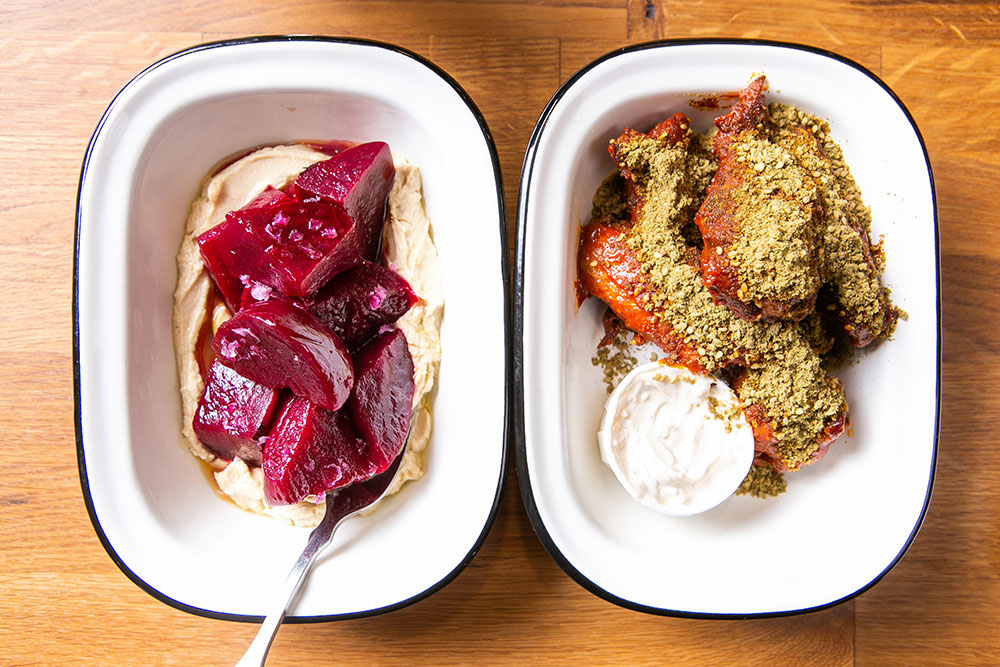 Pittsburgh lost one of its finest restaurants when Justin Severino and Hilary Prescott Severino closed Cure in March. In July, the duo opened Larder of East End; Severino oversaw the refurbishment of the East End Brewing Co. space, creating a more comfortable indoor seating area and an outdoor patio for the beloved craft brewery. My favorite menu items are those that are in Severino’s wheelhouse, including some of the best wings in town, sausages and vegetable dishes such as smoked beets with goat cheese tahini. Larder also foretells what looks to be the next phase for Pittsburgh breweries: in-house kitchens run by some of the city’s top chefs.

Moving Forward:
The smoking technique for more substantial cuts of meat such as brisket and pork shoulder still needs a little honing-in. 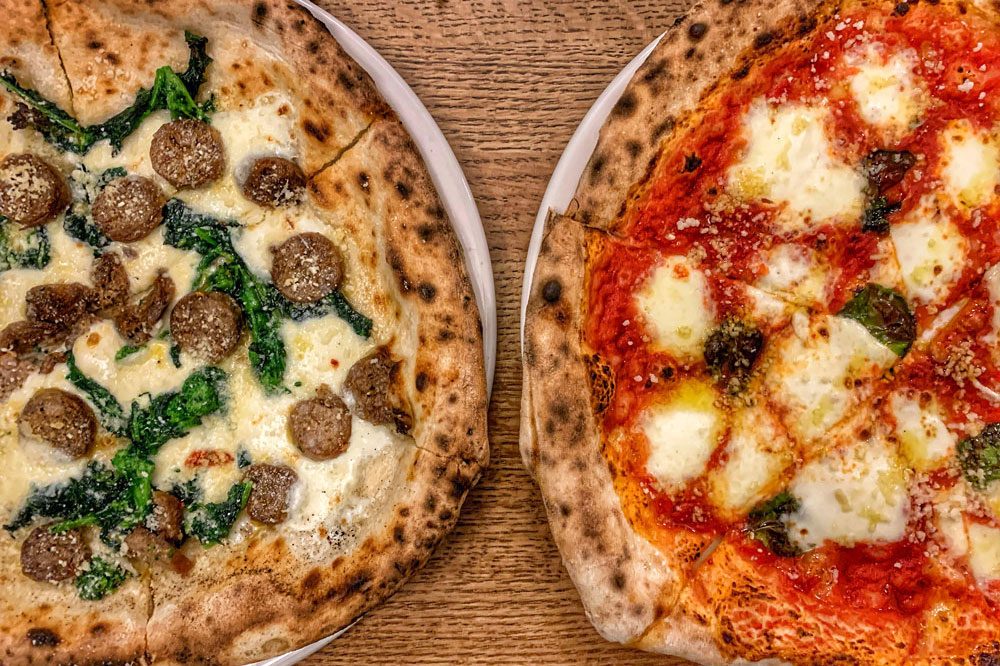 Della Terra Italian Bistro isn’t exactly new — Fiore and Michelle Moletz first opened their North Hills restaurant in a low-slung Harmony mini-mall in 2013. For me, the move into a larger space on Zelienople’s main drag in November, as well as the introduction of lunch service, is a significant enough switch to warrant inclusion on this list. Della Terra’s Neapolitan-style pizzas rank among the top in the region, and its expanded selection of pasta dishes is outstanding. Larger-format dishes such as a peppy Lambrusco chicken served with vinegar-marinated potatoes scented with rosemary are a draw at the new location, too. 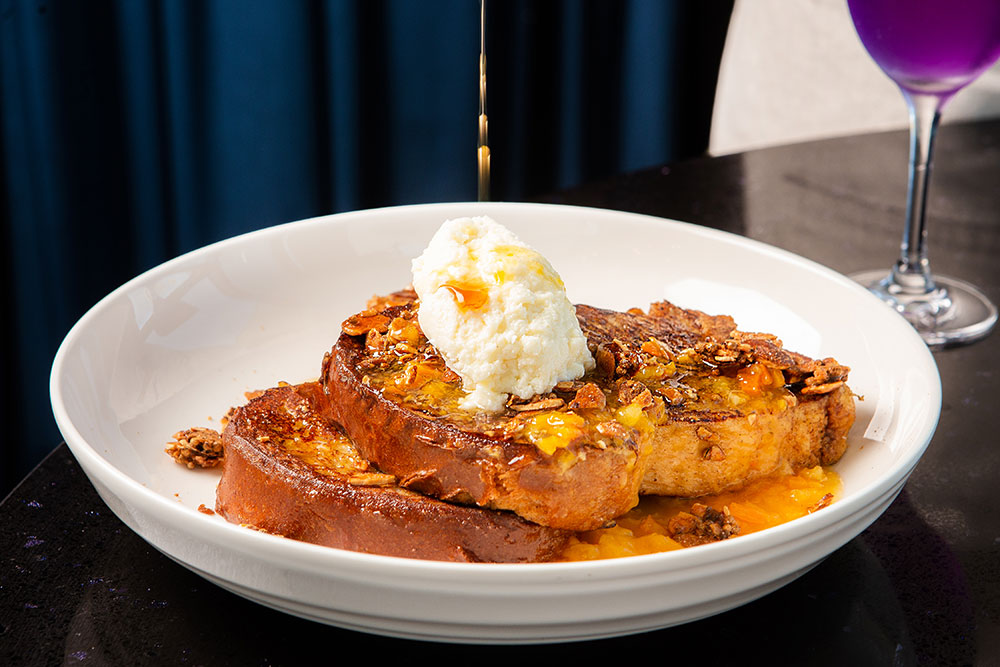 Running a hotel restaurant can be tricky business. It needs to cater primarily to its guests, but the good ones also should be an amenity for the city at large. Spirits & Tales at the Oaklander Hotel got off to an uneven start in March, but Executive Chef Jessica Lewis and her team have done a solid job smoothing over some of the rough edges. Lewis excels at vegetable and fish cookery, and dishes such as radish toast, horseradish gnocchi with mushrooms, fennel and kale and Laurel Hill trout with almond creamed spinach, sunchokes and herb vinaigrette hit the mark. If I ever made a Best Places to Get Breakfast list, you’d find Spirits & Tales on that one, too.

Moving Forward:
Spirits & Tales seems to have turned the ship around, particularly in terms of service and consistency. I hope it keeps moving in that direction. 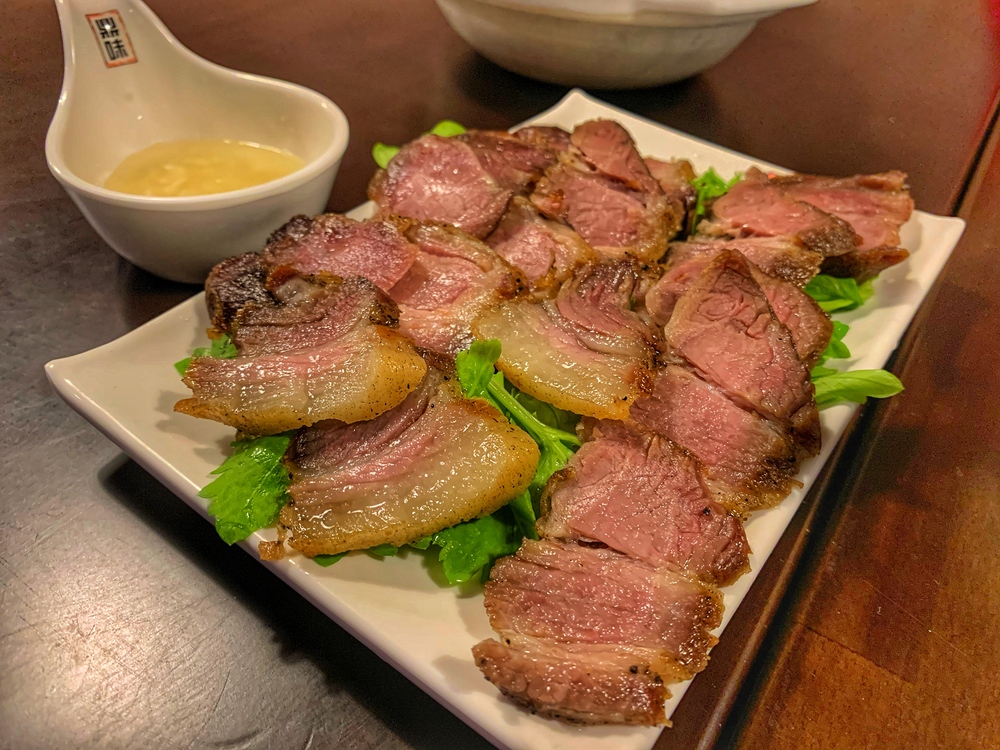 Night Market Gourmet, the new restaurant from the owners of Everyday Noodles, takes a deep dive into Taiwanese cuisine. The Oakland eatery features dishes such as Hakka salted pork, Taiwanese crispy chicken and mustard greens with shredded pork and tofu skin. It’s an exciting menu, but, as of press time, it felt as if the staff were still getting their sea legs. Ownership is in the process of bringing a handful of chefs from Taiwan, and I think that’ll prompt something special from the kitchen.
114 Atwood St., Oakland; 412/436-0068, nightmarketgourmetpa.com

This article appears in the January 2020 issue of Pittsburgh Magazine.
Categories: Eat + Drink Features, From the Magazine, Hot Reads