A Lesson From Mad Man Jack

Steelers Hall of Fame linebacker Jack Lambert once sat dourly at his locker before a game wearing a Johnny Cash Stetson and a matching black t-shirt that said, succinctly, in cartoonish orange bubble letters: I’m a F—–' Maniac.

It wasn’t irony. It was a warning.


Toothless. Mustached. Menacing. Before being drafted by the Steelers in 1974, the scouting report on Lambert, a marginal talent from Kent State, said that while he didn't have ideal size for a linebacker, he had a “lust for contact.”

It’s not difficult to imagine Steelers patriarch Art Rooney Sr. reading the report, biting down hard on his cigar, eyes bulging from behind his black Wayfarer frames, thinking – we gotta’ get this kid.

If an Uzbekistani immigrant came up to a Pittsburgher on the street and asked what’s up with all this Steelers business, the best way to explain 77 years of history, six Super Bowl victories and an entire culture of blue collar exceptionalism to the outsider would be to hold up a picture of Lambert—toothless and snarling and mud caked—and say, “Welcome to the Steel City.”

They called him Darth Vader. They called him Dracula in Cleats. They said he was from Pittsburgh, Transylvania. During a Monday Night Football game in 1974, Lambert introduced himself as hailing from Buzzard’s Breath, Wyoming.

He fooled announcer Howard Cossell, who referred to Lambert multiple times during the broadcast as “the middle linebacker from Buzzard’s Breath.” Everyone bought into the routine.

The sign hanging outside Lambert’s dorm room at the Steelers’ summer training camp at St. Vincent’s college said it all – the one that informed the maids, “don’t clean this room.”

Steelers Nation, and the nation at large, saw a monster – a crazed hooligan unfit to be a functioning member of a modern society who was only capable of existing in the netherworld between the chalk white sidelines of the NFL. Lambert played into the mystique. He’d often sit alone at the end of the bench, staring daggers into the Three Rivers Astroturf, his breath steaming meanly out from underneath the towel that was draped over his head.

But Lambert’s shadow was bigger and scarier than reality. If you flicked on the nightlight, you’d see a tall, lanky, unorthodox kid from rural Mantua, Ohio. You’d see an underdog who played out of his mind, hurling every ounce of his gangly 215-pound frame into tackles. A man who was extremely quiet and private six out of sevens days of the week, preferring to walk alone into a tunnel of redheaded oak trees with a hunter’s rifle and a pack of cigarettes instead of a downtown bar or club with an entourage by his side.

And a man who signed every autograph, so long as the saucer-eyed kid said “please” and “thank you.”

Today’s NFL players could learn a lot from Smilin' Jack. When a primadona receiver sits out a game with a glorified hangnail, you’ll often hear old-timers complain that they could learn a lot from Cold War tough guys like Lambert, or Dick Butkus, or Willie “Contact” Lanier – guys who dove helmet-first into tackles and would play through a lobotomy. But you never hear the old-timers mention the most important thing – what today’s players could learn from the example Lambert set away from the gridiron.

Forget just the Steelers. The league, as a whole, is rife with self-promoting, Twittering, me-first superstars who crave the velvet rope and the limelight. Even the most wholesome of the bunch seem to make a beeline for the makeup chair of a network studio show soon after their playing days are over.

On the field, Lambert was as advertised. He cussed out teammates with tough-love, including Jack Ham and Mean Joe Greene. He stood up for his kicker, of all people, by catapulting the Cowboys’ Cliff Harris to the turf in the ’76 Super Bowl after Harris thanked Roy Gerela for missing a crucial field goal.

As opposing quarterbacks crouched under center, Lambert pumped his legs up and down, thumping the turf like a war drum. He mouthed threats to opposing running backs that would make even the most hardened Catholic nun weep for humanity. He fulfilled those threats with coldblooded suplex tackles. He may or may not have chain-smoked at halftime, depending on who you ask.

For 60 minutes each Sunday, Jack Lambert was a demon. But when turf toe ended his career in 1984, Lambert retreated to the hills of suburban Pennsylvania without a peep or a snarl.

The Legend of Jack Lambert, the myth, would have lived out his days bare-knuckle boxing black bears and scaring unsuspecting schoolchildren. The real Jack is a cross between Ralph Waldo Emerson and Ward Cleaver. 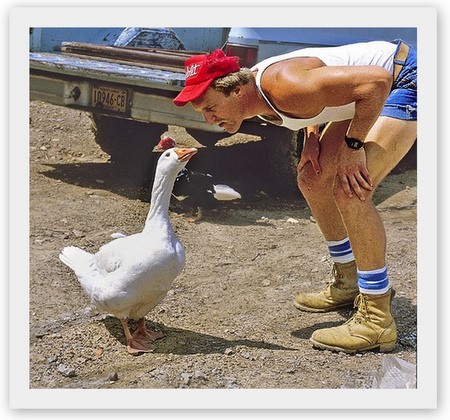 For years he volunteered as a deputy wildlife officer in the tranquil woods close to his home and now spends his time coaching little league baseball, basketball and hockey for his children's teams. For a decade, Lambert ran a youth football camp kids that not only taught kids about the game, but about life. He stressed the dangers of drugs and the importance of hard work and respect for coaches and referees. He didn't invite camera crews or journalists to document his good deeds.

NFL players, are you listening? ESPN doesn’t need you. TMZ and the tabloid sports blogs will survive without your compromising party photos. Kids, however, including your own, do need you.

As he approaches his sixties, Mad Man Jack doesn’t do interviews, and no – he isn’t bitter, as rumored. He’s just a retired dad who never could comprehend why grown men wore his jersey and asked for his autograph.

Lambert understood that he was not larger than life; bigger than the game. He understood that even giants can be felled by a bum toe. He didn’t understand why the fans couldn’t comprehend it; why they fell for the tall tales.

The four-time Super Bowl champion understood the real measure of a man – hard work, loyalty and family. After Lambert bodyslammed Harris in Super Bowl X, reporters asked Steelers coach Chuck Noll about the supposed cheapshot. Noll paused a moment, then looked at the reporters with conviction and said, "Jack Lambert is a defender of what is right."

There was no one more Pittsburgh than Lambert, and today’s Steelers, emerging legends in their own right, could learn a lot from that f—–' maniac.

Note: Special thanks goes out to legendary Irwin Standard-Observer reporter Vic Ketchman and Sports Illustrated’s Paul Zimmerman, whose pieces on Lambert served as a basis for this article. Have your own Lambert story? Share it in the comments section.