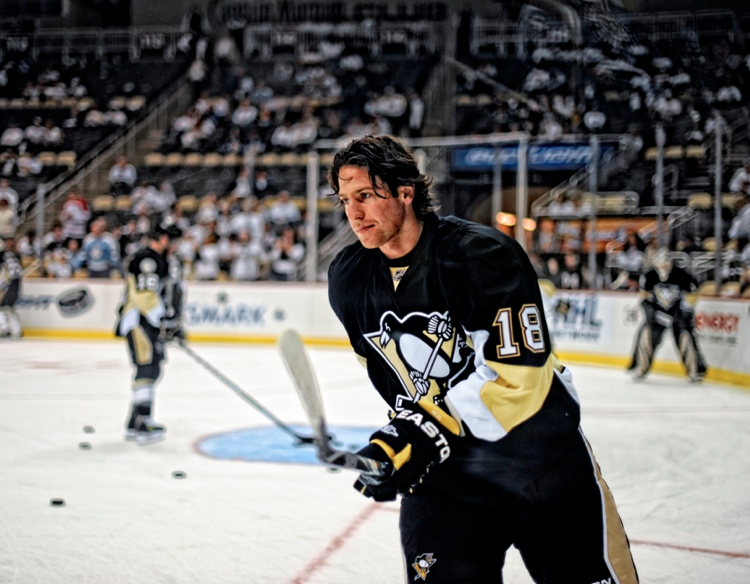 Here’s the kind of crazy stuff Matt Cooke used to do. During a 2009 road trip to hostile Philadelphia at the height of anti-Crosby mania, Cooke left a present in Sidney Crosby’s locker before the game. It was a baby’s pacifier.

That’s funny. It was definitely tongue-in-cheek. But deep down, it also was kind of a clever challenge. It was a reminder to Crosby that no matter how dominant he became, there were 19,000 people waiting who absolutely hated him. And there always would be.

Crosby was 21 then. He’ll be 27 this summer. Here’s something to ponder: Do you think this current Penguins team has a single player who would challenge Crosby the way Cooke would? The way Bill Guerin would?

Here’s another thing to ponder: When was the last time you saw that trademark fire, that maniacal competitiveness, in Crosby’s eyes? Even the Penguins ownership was concerned with Crosby’s body language in the playoffs, according to Trib sources, which inspired a rare trip to the locker room by Mario Lemieux after Game 6. Aside from this passive-aggressive spat with Dan Bylsma on the bench in Game 2, Crosby looked like a guy sitting in an H&R Block.

With three minutes remaining in Game 7, Chris Kunitz hesitated at the blue line, and Crosby drifted offside. It was a bizarre mistake to witness — the kind mere mortals make all the time but that Crosby seemed immune to from 2008-2013. Old Crosby would’ve went nuts, at least internally. But instead of seething with wild-eyed rage and rapidly engorging like a tomato-red Randy Savage (the punches are only making him stronger!), Crosby did the craziest thing I’ve ever seen him do. He shrugged his shoulders and laughed.

For all the tedious systems breakdowns and capital-n Narratives and blah-blah-blah blogosphere echo chamber nonsense, that picture was worth a million tweets. This team couldn’t wait for the season to be over.

If you convinced yourself that Crosby was super excited to be playing alongside Lee Stempniak, Beau Bennett and scrappy-doo Brian Gibbons, you can be forgiven. If you convinced yourself that Dan Bylsma is a great coach because he can deliver a great monologue, you can be forgiven. If you thought the players had a warrior spirit because they, like, climbed some jungle gym obstacle course with retired Navy SEALs during training camp, well, that was a pretty avoidable goof. You could’ve just looked at the blocked shot stats. Or hits. Or the limp, comical why-I-oughtta scrums. Evgeni Malkin, for so long maligned in this town for his perceived lack of effort, left his heart out on the ice. The rest of the team shot a lot of wristers from the fringes.

Here’s a thing Ray Shero said to me right before the 2011 trade deadline, when the Penguins were still glowing from the Cup win and subsequent 101-point season: “Our identity to people outside of Pittsburgh might be the high-scoring Penguins, but to me we’re a blue-collar team. I want that to be our M.O.,” he said. “There might even be better players out there, but maybe they’re not what we’re looking for in a Penguin.”

Shero explained that a “Penguin player” was someone who worked hard in puck battles and sacrificed himself for the good of the team. A leader. A good character guy.

For years, the deal appeared to be one of Shero’s crowning achievements. Alex Goligoski for Neal and Matt Niskanen? A fleecing. Neal turned out to be a 40-goal scorer the following season. He became a living metaphor for the Consol-era Penguins: loads of regular season goals, plenty of swagger, always quick with a joke in the locker room. On a random Tuesday night against the Carolina Hurricanes, nobody was better than Nealer.

You could be forgiven for thinking Neal was exactly what the Penguins had been missing in the room — a guy who had the balls to speak his mind to Crosby and Malkin like Guerin once did. A guy who played with a dangerous edge like Cooke once did. Only there was one problem: Neal never took responsibility for his play in the defensive end or neutral zone. He was like a devastating Howitzer cannon that had to be painstakingly wheeled into position by other soldiers. As was so painfully evident when Malkin was taken off his line to play with Crosby, Neal cannot create his own shot.

In his four years with the Penguins in the playoffs, Neal is a minus 5. The narrative on Guerin was that he was the hilarious dry-drunk uncle whom everyone in the room instantly respected. As the Tribune-Review's Rob Rossi has pointed out, that wasn’t the case. When Guerin joined the Penguins, many didn’t know what to think. The story everyone heard was that Guerin joined the team on the road in Florida, instantly busted Crosby’s chops when he came into the room and that won everybody over. But it was Guerin's play, specifically his work ethic in puck battles and in front of the net, that won over the Penguins, specifically Crosby.

Guerin was a player that Sid, the ultimate student of the game, could respect.

Nevermind that Neal kneed a helpless Brad Marchand in the back of the head, the kind of ridiculous cheapshot that Crosby and Lemieux have been co-lobbying to eliminate from the game. Let’s just chalk that up to the fog of war. Strictly speaking in technical on-ice terms, Neal is not a player you win a Stanley Cup with. And as brilliant as he was in the regular season, neither is Matt Niskanen, at least for the Top-4 money he will command in the off-season. As a wise man once said, a man who has just taken the Montreal Canadiens to a seventh game against the Boston Bruins: “Too soff.”

In the years since that 2011 trade, James Neal has scored a lot of goals. He’s developed a camera-friendly buddy-cop relationship with Malkin. The Penguins have become a corporate-savvy #Brand. But they’re certainly not the blue-collar ideal Shero once envisioned. If you still hold those illusions, go back and watch all five New York Rangers form a human shield in front of Henrik Lundqvist for the entirety of Game 7. Go back and watch the Boston Bruins do the same for an entire playoff series last year.

This is where Corsi and other advanced stats fail. This is where Imagine Dragons montages fail. This is where “In the Room” propaganda fails. The Penguins blocked 89 shots in the series. The Rangers blocked 119. Let that sink in: 30 more shots. That’s an entire game's worth of rubber they absorbed. Crosby and Malkin blocked 3 shots combined in the entire series. To put that in perspective, Rangers center Brian Boyle blocked 4 by himself in Game 7 alone.

Editor's Note: Some in the advanced stats crowd pointed out that the Penguins and Rangers both blocked about the same percentage of shots vs. the shots attempted (24%), which is a fair point. But can anyone really accept that Rick Nash (Rick Nash!) blocked 12 shots in the playoffs while Chris Kunitz blocked only 4? Blocked shots are near the bottom on the list of reasons why the Penguins were bounced, but Nash's numbers should tell you everything about the motivation levels in both camps.

This team wanted to go home. Maybe the players even wanted their coach fired.

Is it all Bylsma's fault? Did Shero betray his own convictions when building this admittedly flimsy, stick-on-puck, passive, power-play-reliant squad? Is the NHL slowly morphing back into a mid-’90s clutch-and-grab quagmire? Was Crosby hurt?

It’s all background noise to a larger cultural problem on Fifth Avenue.

“We were just a couple of bounces away.” This was the refrain from the Penguins — players, coaches, brass — after being swept by the Bruins last season. Away from what? Can you imagine a coach like Los Angeles’ Darryl Sutter adopting that cheeseball corporate crisis control rhetoric in the wake of such a thorough collapse?

This flop will be analyzed from now until training camp, and even then, it seems like the vigor of the Early Crosby Era has been sucked out this franchise. Nostalgia is tricky. There were literally rats running around outside the locker rooms when the Penguins won the Cup in 2009. The Penguins needed a world-class facility. They needed a new arena. Instead, they got a country club.

I keep going back to another thing Ray Shero told me back in the glory days of 2011.

Shero was talking about the family atmosphere of the Penguins and his personal relationships with players. He admitted that it can sometimes present an awkward situation when dealing with player evaluations, trades and times of adversity. Then he dropped this line. And I’ll be thinking about it all summer, as the great dismantling of the Consol-era Penguins begins.

“What are they gonna do — call their mom? This is hockey.”