The People vs. Sidney Crosby

The greatest hockey player in the world doesn’t seem like himself. So what's wrong? 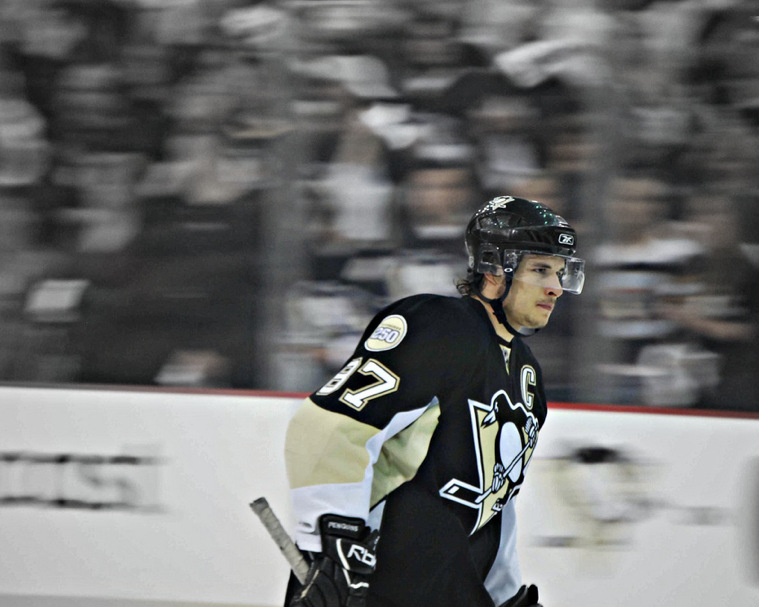 Let’s just face up to it. One, the world is an uncaring place. Two, Sidney Crosby is not the same player he was at the height of his powers in 2009-2010, when he scored 50 goals, slalomed through defenses with an effortless grace not seen since Early Lemieux, used his backside to dominate corner battles and dictate the tempo of games like Vintage Jagr, floated absurd passes over a crowded slot with the feather-soft touch of Gretzky, and, on the rare Tuesday night when all that failed, didn’t hesitate to dig a trench in the blue paint in front of Zdeno Chara or other such mean monoliths and declare, “You might pummel me into an arthritic mess, but not before I lather your goaltender into a panic attack.”

This gives the vapours to olde tyme hockey mumbleywumps like Mike Milbury, but it’s true: the NHL had never seen anyone quite like Crosby. He combined all the best traits of the game’s greats, and not because he was some kind of supplement-addled sports-science Frankenstein like Brian Bosworth or because he hit the Darwinian Mega Millions like Bo Jackson. No, Crosby became the best through sheer will. He squatted himself to greatness, then he thought himself to excellence.

So the stakes are high. What we’re talking about here is earthly brilliance. We’re talking about a man who was so infallible in his early 20s that he obliterated a multimillion dollar PR myth-making industry that attempted to give him a rival — strained so hard that you actually started to feel bad for Alex Ovechkin and his receding hairline.

Which is why it was so uncomfortable to watch Crosby halfheartedly trudge around the ice in Columbus for Game 3 of the 2014 Stanley Cup Playoffs. Crosby had, to the human eye, what appeared to be a real stinker. Is he playing hurt? Did he give up on the coach? Is this team fundamentally broken? Does he lay awake at night whispering the names Glass, Vitale, Megna, Adams like Arya Stark’s Valar Moghulis hit list?

Twitter was apoplectic with speculation. And, sure, Twitter-is-Twitter and all that, but if you watch this clip enough times, you’ll find it nearly impossible to delude yourself into thinking that everything is fine:


So, he’s hurt, right? All you’ll get out of any NHL team at this point in the season are reductive aggro-bro chestnuts like: IT’S THE PLAYOFFS, IF YOU AIN’T HURT YOU AIN’T TRYIN, or perhaps a lawyerly: Day-to-day, Unspecified Human Body Injury.

For what it’s worth, CBC cameras tracked him during Game 4 and clocked his top speed at 6-7 miles per hour slower compared to the Olympics. Interesting, but still completely anecdotal. The CBC footage showed Crosby’s very first shift in Sochi, where he hit 37 mph. Then they showed a shift late in the third period of Game 4, where he hit 30 mph.

That’s not statistically valid. If the CBC’s cameras shed light on anything, it’s that people are so freaked out by Crosby’s momentary lapse into something other than a destroyer of worlds that we seek out technology for some kind of rational explanation. Must be a glitch. Must be a knock. And so forth.

Here’s how frantic it’s getting: After Crosby dinked-and-dunked his way to a solid Game 5, two very savvy hockey writers, Mr. Dejan Kovacevic and Mr. Jesse Marshall, got into a Twitter debate — not just over Sid’s debatable performance, but over a more fundamental and perhaps heartbreaking question. Post-concussion, is Sidney Crosby still an aesthetic marvel?

Kovacevic pointed out what our heart is telling us: Crosby’s floating on the fringes. He’s not going to the net anymore.

Marshall pointed out what perhaps we can’t see from the couch: Statistically, Crosby is actually having a pretty good series as the “engine” of the team. He’s still controlling the game cerebrally if not physically. Using the advanced stat of Corsi For Percentage (essentially, how many shots a player’s line attempts while they’re on the ice versus how many the opposition line attempts), Crosby’s line has been dominating puck possession at even-strength against Columbus.

Even in Game 3, at the height of social media’s Crosby career eulogy, Sid’s line had 16 shot attempts compared to the opposition’s 5.

To which anyone who has watched every minute of this series will rightly say: Who cares? There is no stat to quantify just how weird Crosby looks right now. The dude is, like, drifting.

We're at a crossroads.

Will Penguins fans accept a post-concussion Crosby who manipulates the game from the fringes, who orchestrates the tempo like a point guard or (to borrow a more apt term from The Beautiful Game) a creative midfielder?

If Twitter is a barometer, the answer to that question is absolutely not.

But time has its way with all of us. Crosby is 26. History says elite players start to dwindle after 27. The smart ones evolve into a different kind of beast. Watching post-Hodgkin’s, post-back-surgery Lemieux had its flourishes of visceral thrills. But most of the brilliance of early-30s Mario was a slow burn. He built his legend with his mind, picking apart gaps of space that defenses didn’t even know were there.

The sad fact is that Lemieux never won another cup. Like Crosby, there were cries for more talent around him. There were plenty of coaching changes. In the end, Lemieux had logged too many hard miles by age 28. That final, absurd, unfathomable push just wasn’t there.

I’ll never forget what Crosby told me as the Penguins were still shaking the rust off of a summer of Stanley Cup celebrations in the fall of 2009. We were sitting down for a cover story in the Penguins’ endearingly ragged Southpointe locker room after an early-season practice. Various Penguins were joking around, laughing. Crosby was in his de-facto corporate greeter mode: friendly, bland.

But then I brought up the whirlwind turnaround of the 2009 Stanley Cup Finals and his expression changed. Games 6 and 7 were maniacal struggles. The Penguins had come back from the dead. Crosby had achieved his childhood dream at age 21. And yet, more than relieved or even contented, Crosby looked exhausted.

Writers have a habit or taking a throwaway sentence from an interview and dressing it up with all sorts of imbued significance. It’s the job.

So you can take what you want from what Crosby said next, but I will say, for the record, that it struck me as the most sincere and real moment I’ve ever had with an athlete.

“Winning the Stanley Cup wasn’t easy,” Crosby said, pausing for a moment with that pleasant and non-threatening resolve of all professional hockey players. Then, suddenly, he let a real human emotion slip for a moment. Maybe it was exasperation, or even frustration. “It was a lot harder than it looks. Maybe a lot harder than I thought. And I don’t know if anyone outside of this locker room understands how hard it is.”

It was a week into the new season. His right ankle was already bruised purple. The narrative machine was churning away — he could win three, five, seven.

I left the locker room wondering if we had just seen the beginning of something, or the end.