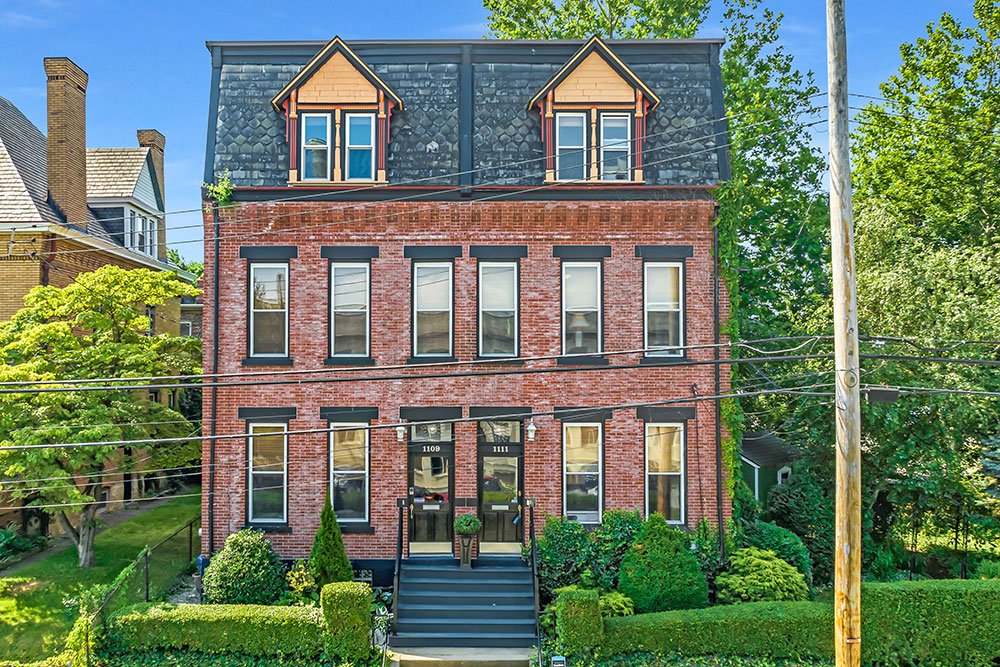 It is not a stretch to say Dennis Campbell saved a piece of Pittsburgh history from the wrecking ball in 1995, when he jumped feet first into purchasing a Second Empire-style duplex at 1111 Island Ave. in Pittsburgh’s California-Kirkbride neighborhood.

Built in 1886, the home had definitely seen better days.

“The house had been for sale for about a year or so,” Campbell recalls. “It was owned by a young couple who were barely in their 30s when they inherited it.” 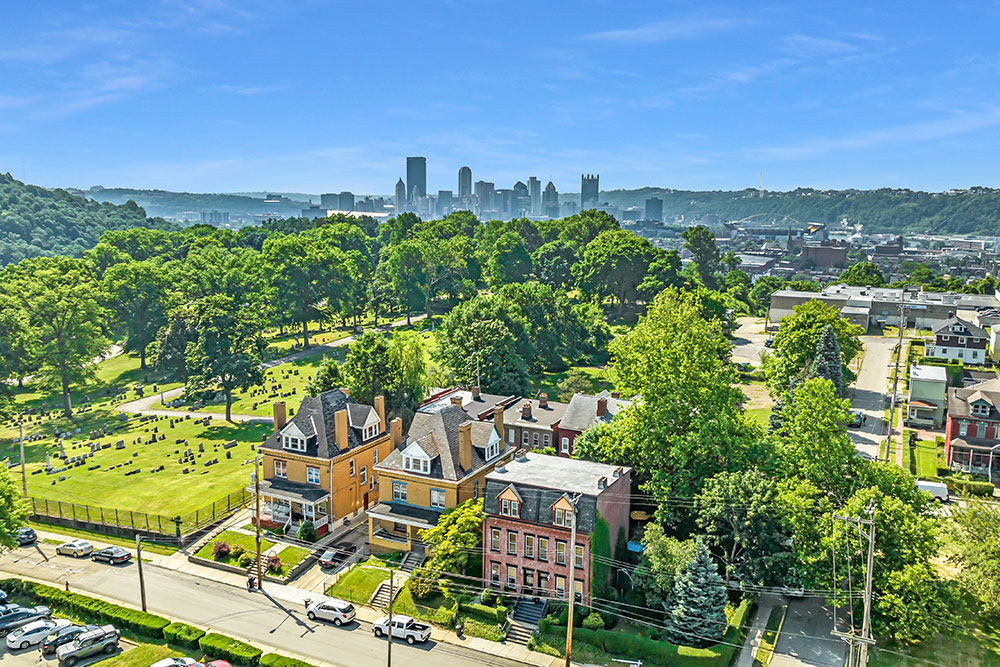 When the title was transferred to the couple, the City of Pittsburgh informed them they needed to make improvements to the home — immediately — or the city would take steps to tear it down, according to Campbell.

At more than a century old, the building had been cut up into apartments over the years,  and, at the time, the roof on the other side of the attached duplex was caving in.

Knowing the building needed to be renovated down to the studs, the couple instead put it up for sale. That’s when Campbell, then in his 30s — and with the energy, ingenuity and the know-how to turn the property around — stepped in. 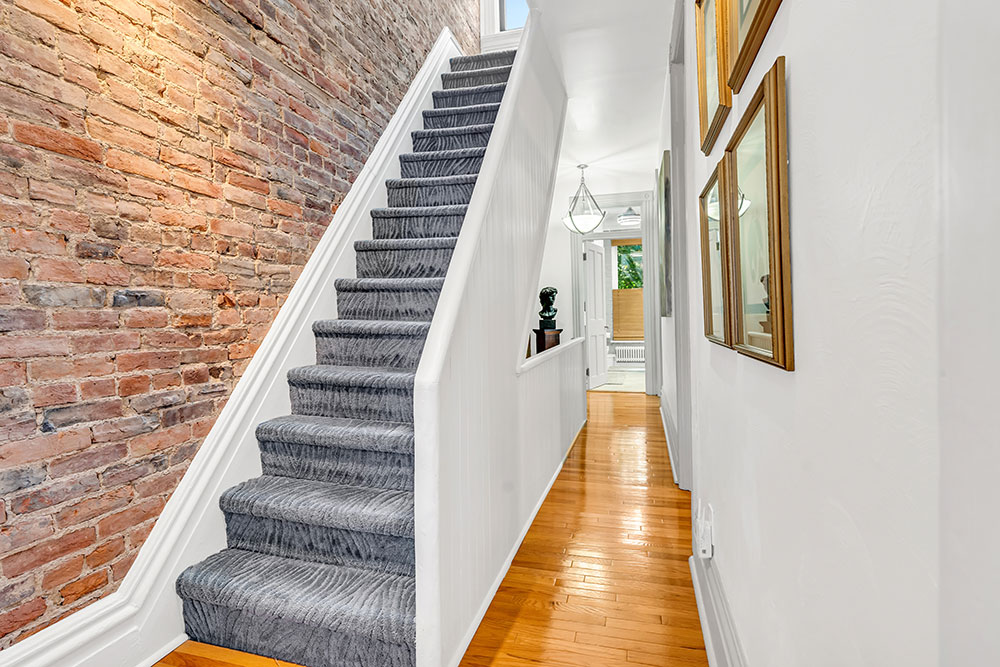 After partnering with the city’s Urban Redevelopment Authority to secure financing and grants for the building’s acquisition and repairs, Campbell took out additional loans to get the restoration underway.

He and husband Bill Stickley then tackled the project at 1111, while using the other side at 1109 as a rental unit before selling it a few years ago. Their personal residence at 1111 features four bedrooms, 2½ bathrooms and a beautiful side garden that is an homage to the estate that once occupied the property. 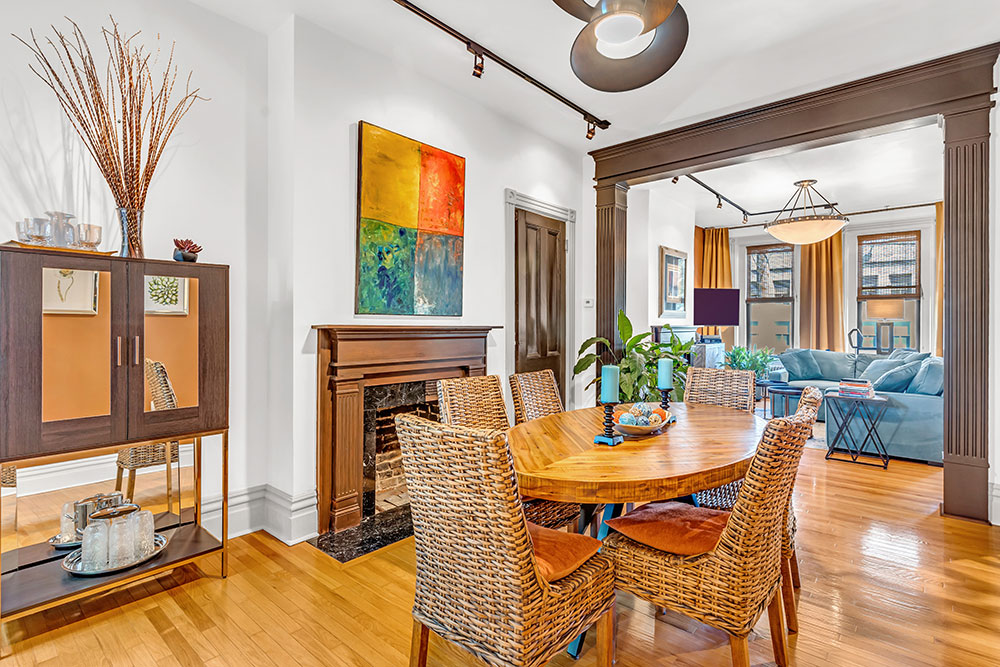 While the couple hired help for the heavy structural work during the extensive renovation, “We have done everything else,” Campbell says.

They started by having all the small, odd-sized windows removed. They also restored the property’s original brickwork and installed double-hung replacement windows that were the same size as the original panes.

“Doorways were inserted where they didn’t belong,” Campbell recalls. “And there was the drop-ceiling that everyone installed along the way.” 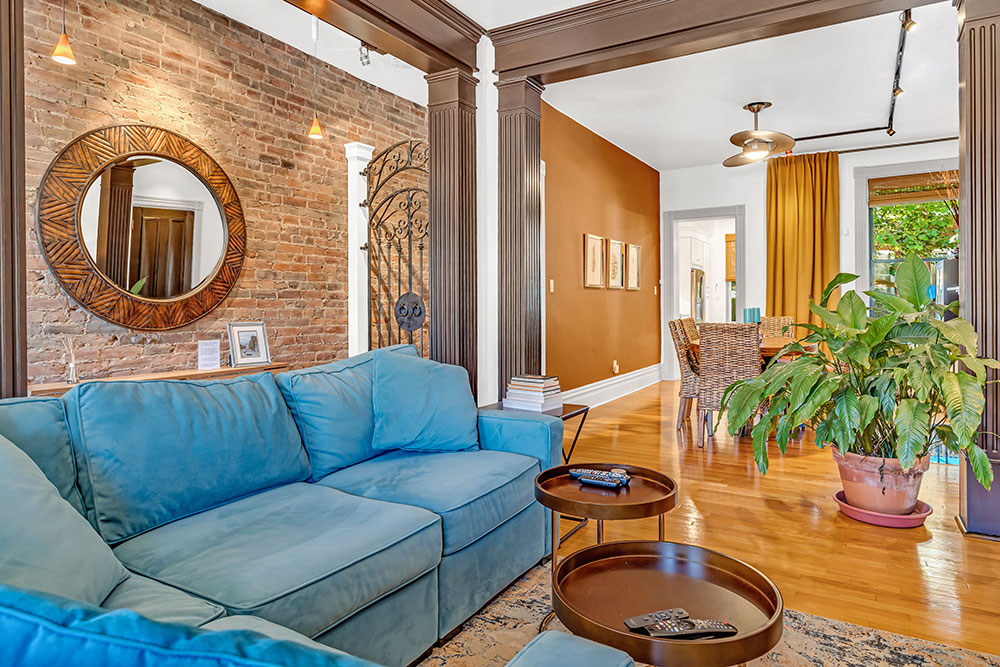 Today, the home’s charming vestibule welcomes you in with a long wall of exposed brick. The home also contains the original millwork, and there are five decorative fireplaces.

While the couple opted to keep the living and dining room open to the long entry hallway, they installed custom headers and columns that they milled and channeled themselves. Painted a deep chocolate, the features play nicely off the deep butterscotch accent walls in both rooms.

“It is a very comfortable house. You can rearrange the furniture in those spaces very easily,” Campbell says. 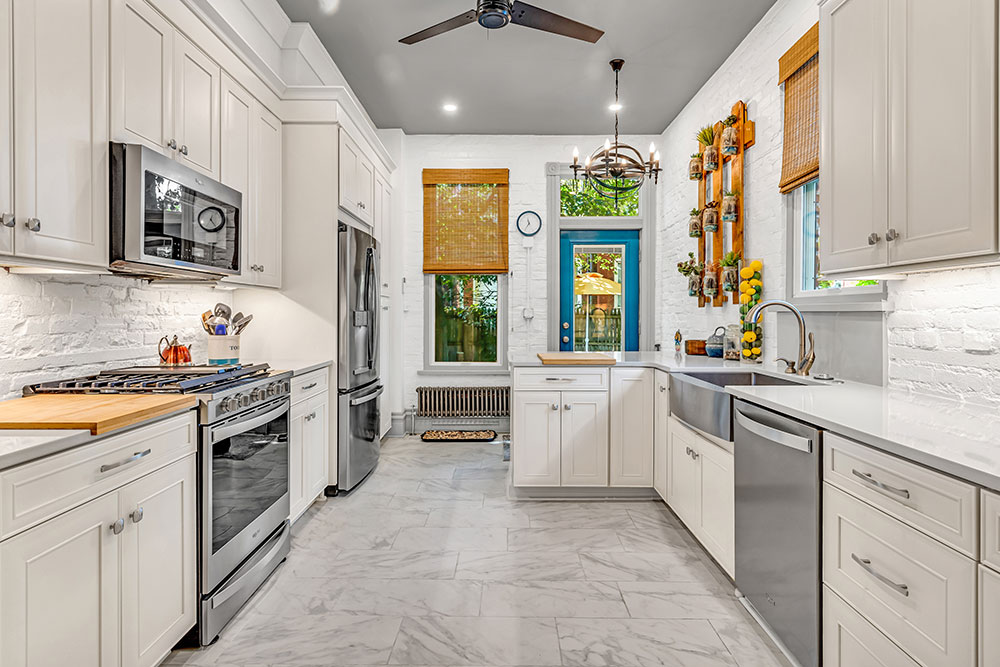 The recently renovated kitchen is a mix of new and old, thanks to the original exposed brick walls, which have been painted white, paired with sleek gray cabinets and quartz countertops. A stainless appliance package and apron-front sink bring a modern look to the space, as do the tall ceilings, which are painted a mid-tone gray. 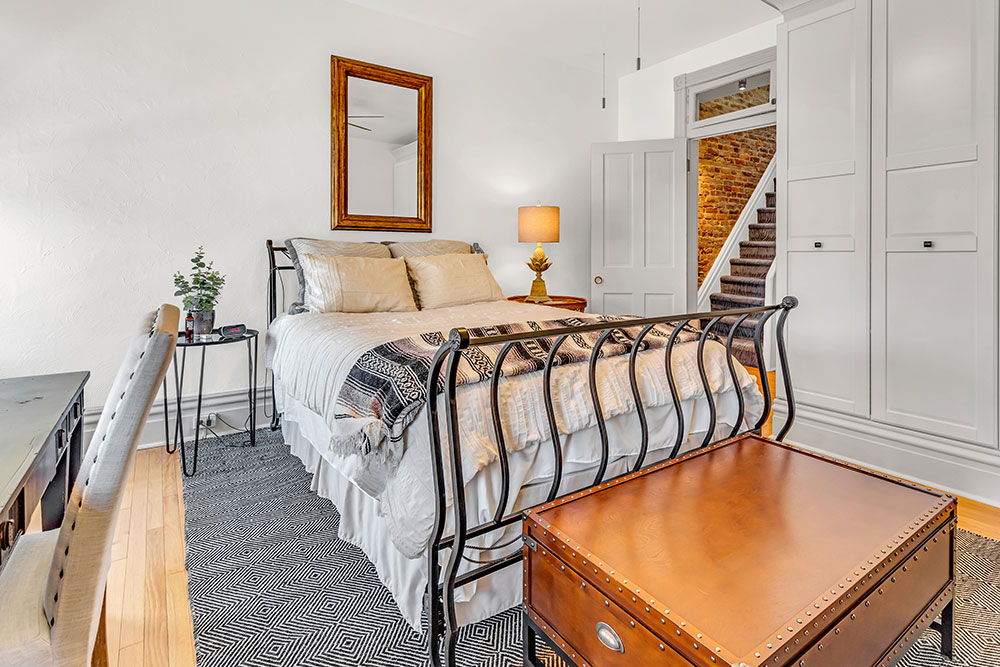 A unique iron gate from California guards the entrance to the second floor, where luxury touches abound, including in the primary suite.

A trio of windows flood the room with light. There’s also a built-in custom closet painted the same gray as the home’s millwork.

Featuring exposed brick walls painted a deep, earthy gray, the primary bathroom has been smartly updated  to include a double gray vanity with quartz sinks, a soaking tub with a modern tub filler and a separate shower outfitted with a window-paneled wall that adds interest while still preserving privacy. 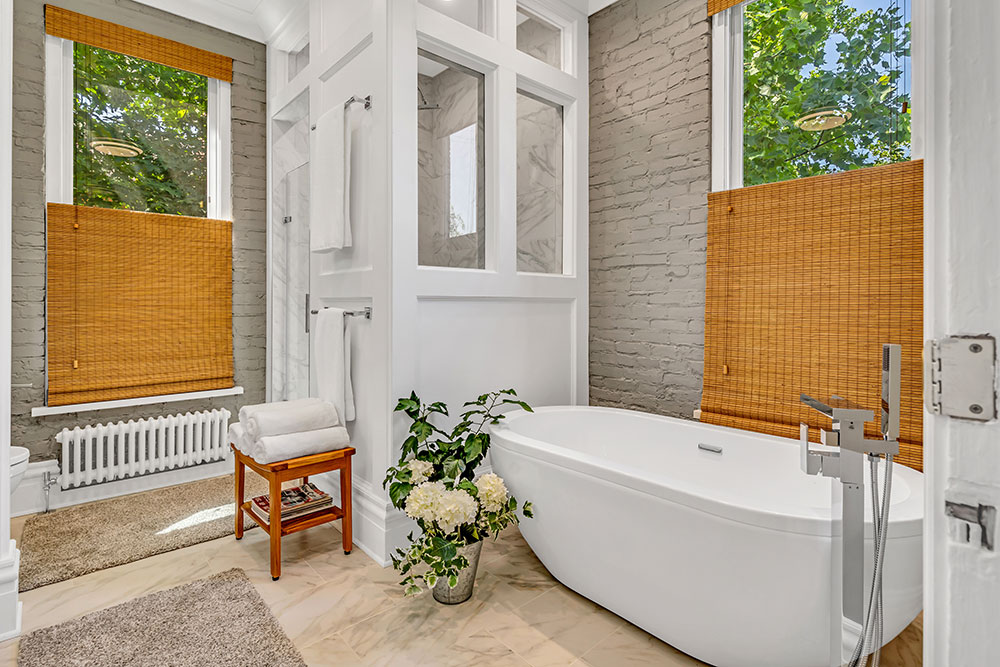 A half-bathroom, once the home’s only bathroom, sits on the same floor. It contains a sharp vanity, tall mirror and a window with a tree-filled view.

The second bedroom on this level is currently used as a home office, but could easily be turned into a child’s bedroom or nursery.

On the third floor is another custom bedroom, this one with built-in shelves and mirror-door fronted closets. Featuring a hotel-style wet bar and a decorative fireplace, the level’s captive second bedroom is now used as an office. 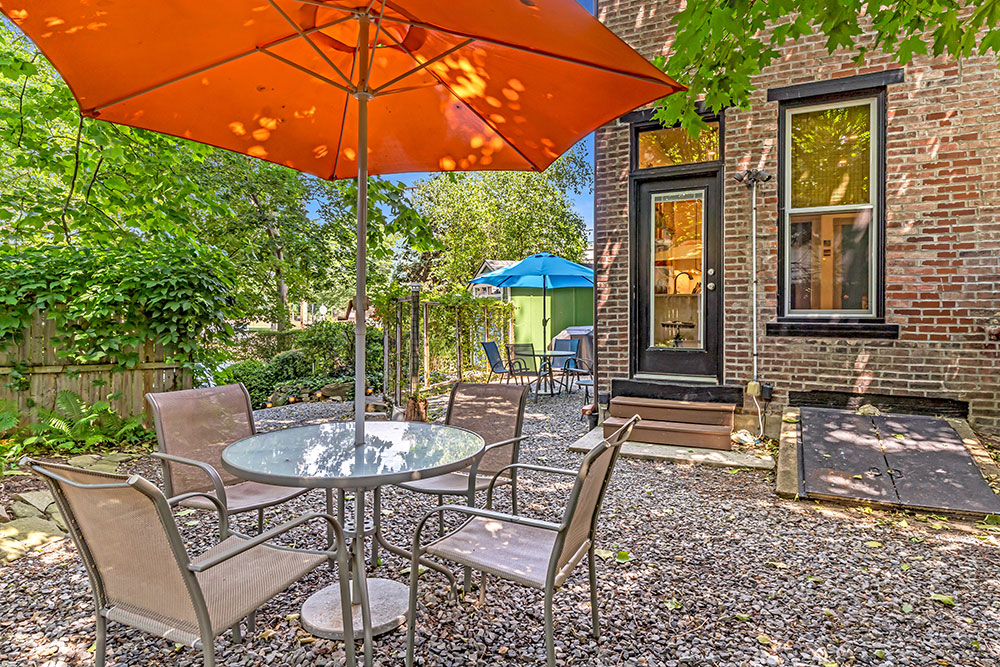 Outside is a graveled entertainment area centered by several tables. Shaded by tall trees, the fenced-in space has perimeter plantings. Beyond it is an entrance to a lovely garden filled with shrubs and ornamental trees.

“The neighborhood is interesting,” Campbell says. “Originally, where my house sits, there was a big mansion that was called the Mount Emmett Hotel.”

In the book “Pittsburgh, Story of a City, 1750-1865,” the Mount Emmett Hotel was described as one of many local dinner-dance resorts that were “well patronized.” It also noted the spot, famous for its chicken and waffle dinners,  as the perfect place to take in the view of the old Village of Allegheny. 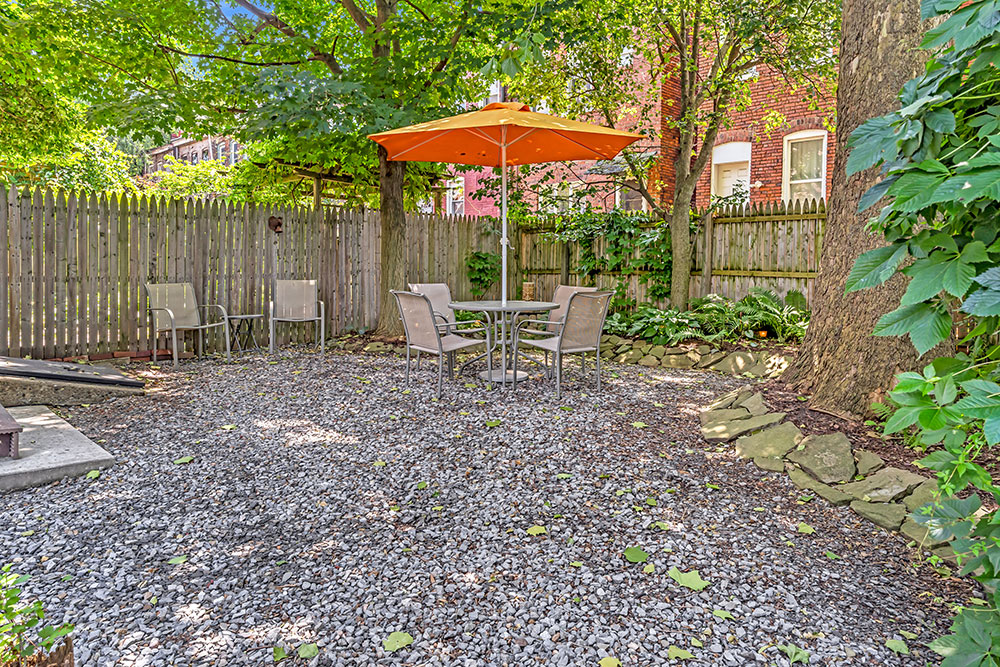 Across the street from the duplex is Oliver Citywide Academy, which once was a strawberry farm, according to Campbell.

“In fact, Island Avenue used to be called Strawberry Lane,” he says.

After moving into a rental they own around the corner, Campbell and Stickley are, for now, planning to stay in the neighborhood. Now that the work is done, Campbell is contemplative as he looks back on what made him buy the duplex in the first place.

“I just wanted to be a good steward of that neighborhood,” he says. “I really would like to encourage someone with that same mindset to carry it forward for the next 20 or so years.”

About: California-Kirkbride, which borders Manchester (manchestercitizens.org)
Population: 761
Planes, Trains & Automobiles: A 25-minute commute to the airport. Daily transport via Pittsburgh Regional Transit bus. Rideshare available. Street parking.
Schools:  City of Pittsburgh Public Schools (pghschools.org)
Neighborhoods: Historic homes and community groups are pushing to maintain the historic aspect of this neighborhood, which was once part of old Allegheny City. California-Kirkbride would have remained part of the Manchester neighborhood had it not been cut off by old railroad tracks. This sliver of a neighborhood connects to some of Pittsburgh’s most historical areas. It also has nine distinct sets of Pittsburgh’s iconic city steps — all in working order.