Why is the Three Rivers Arts Festival Moving Out of Point State Park?

Festival organizers said the decision to move was prompted by new rules regarding the use of the park from the Pennsylvania Department of Conservation and Natural Resources. 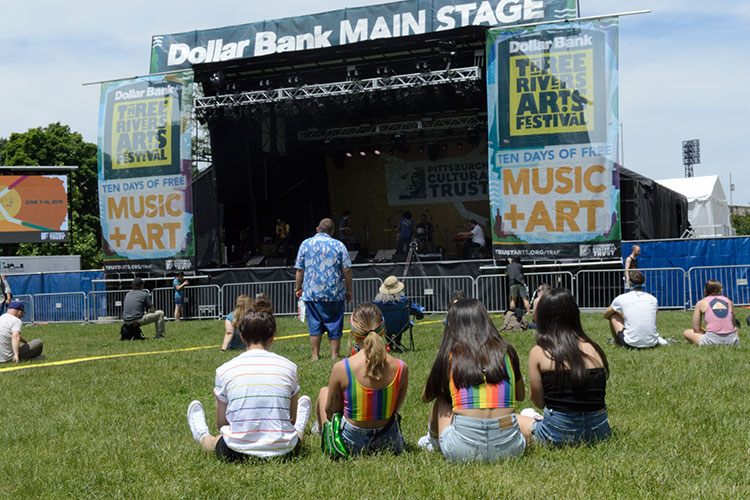 Earlier this week, organizers of the annual Three Rivers Arts Festival announced its move to the Cultural District from Point State Park, citing “new usage rules and regulations issued by the Pennsylvania Department of Conservation and Natural Resources” for the space.

The new guidelines, established last fall, cap large events at seven days. Anything longer than that, officials say, brings too much wear and tear to the park. This includes damage to the grass and other landscaping, as well as excessive work for clean-up crews who have to clean restrooms, pick up garbage and scrub away graffiti after events. For the same reason, events must be held at least five days apart to allow time for proper park maintenance.

Wesley Robinson, DCNR press secretary, says they weren’t trying to push out any specific group or event; other events like the Fourth of July, the Great Race and Juneteenth — which ran for two consecutive weekends in 2021 — likely won’t be impacted because they don’t last as long as the 10-day Arts Festival.

According to Robinson, the decision to implement these rules and regulations was made after back-to-back festivals last year, which left the park in need of some TLC.

“It became clear we couldn’t continue down that same path, and we made some changes to ensure the park was up to standard for anyone who visited at any time,” he says. “When there are that many people at the park, things end up getting a little worse for wear. There’s unfortunately vandalism. We have to make sure the park is safe and up to standards for all guests.”

Robinson explains vandalism and littering have been problems in the past, and with long festivals or festivals that happen within days of each other, it’s difficult to put in the maintenance needed to make sure the park stays nice.

However, some think limiting the events that can call the park home defeats its whole purpose.

“The goal should not be [to] make it as easy as possible to keep the park in good shape, but to have as many people enjoy the park as possible. The park would be in even better shape if we just completely prohibited people from using it at all, but that misses the point of having a park,” one Facebook user wrote. “Here we have a half-measure along the same lines, drastically reducing the public’s use of the park to make it ‘better’. But the public’s use of the park is why we have a park.”

The decision to move the festival drew ample criticism from festival goers near and far, many of whom believed the physical space was part of the festival’s magic.

Another Facebook user wrote, “We should not assume that events like this can or will succeed ‘no matter what’ and ‘no matter where.’ ‘Magic’ is a delicate thing — change one ingredient, and it may never be the same. The fact is, we may be losing something wonderful here.”

But Robinson maintains that even though he understands people’s concerns, the rules and regulations were put there for a reason.

“I understand everyone wanting to have the same experience that they’ve always had, but unfortunately, that has to change for the health and safety of the park,” he says.