What Will It Cost to Restore Pittsburgh’s Riverfronts, Parks and Trails?

Riverlife’s Completing the Loop project, which aims to create community green spaces within the city’s 1,055 acres of riverfronts, will be funded largely through fundraisers. 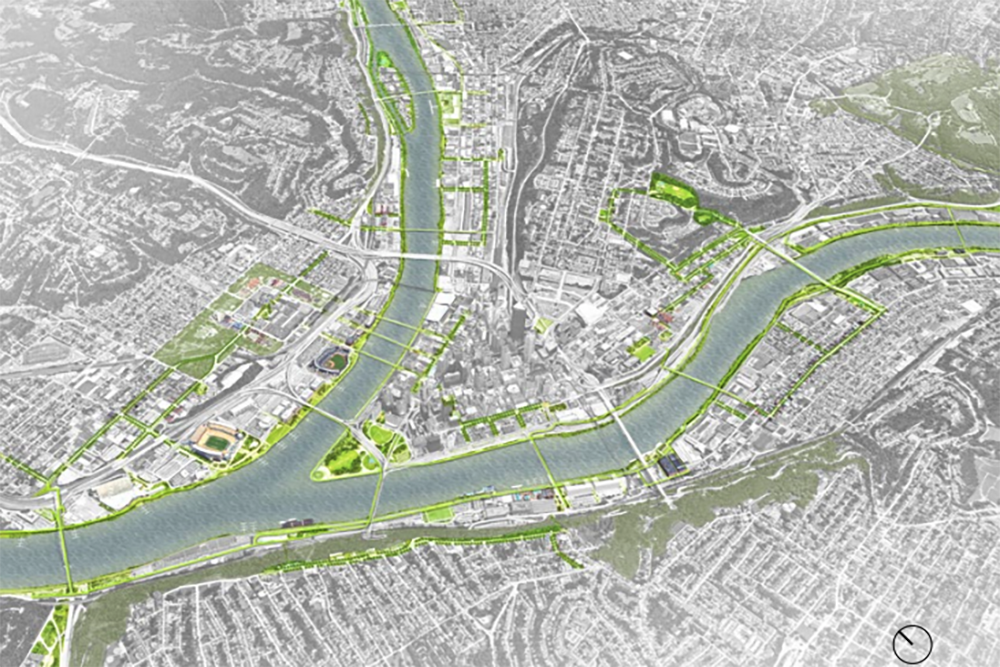 PHOTOS VIA RIVERLIFE | AREAS MARKED IN GREEN REPRESENT THOSE INCLUDED IN THE COMPLETING THE LOOP PROJECT.

Access to Pittsburgh’s many trails and parks may be priceless, but the process of finishing and restoring these areas is anything but; Riverlife’s Completing the Loop project is expected to cost an estimated $246.9 million.

The funding, according to Riverlife President and CEO Matt Galluzzo, will come from a range of places — chiefly, fundraising.

“There’s not a one-size-fits-all method of implementation for all these projects since the stakeholders and property owners are different for each,” he says. “What Riverlife has done during our Completing the Loop initiative is assess each situation and determine the resources and partnerships needed to address each segment. But fundraising across all levels — local, state, federal, private, philanthropic, individual, corporate — will be critical for many of the capital improvements.”

Galluzzo also says that Riverlife has “a strong track record” of garnering support from individuals, corporations, foundations and public sources. Its team is well-versed in securing investments that will help it realize its goals.

He also urged the public to keep an eye on Riverlife’s e-newsletters and social media channels for updates on “key fundraising successes.”

The Completing the Loop project has been in development for years, and has included the restoration of Allegheny Landing on the North Shore and the revamping of Downtown’s Allegheny Riverfront Park, among other things. Last week, the organization released a 248-page report detailing the plan — and what its “essential projects” will cost.

The price tag includes new parks; renovations of existing parks; the addition of new structures like activity buildings, storage buildings or concession stands; structured switchbacks that connect bridges to the trails below; green street connections like sidewalks, rain gardens and street trees; green parking lots, which consist of rain gardens and porous pavers in the parking stalls; and more.

The company breaks its cost estimate down into six locations at varying price points and with timelines ranging from two to 10 years.

The first project listed — and the most expensive — will take place in the West End. With a price of nearly $115.9 million, it will add public spaces, or gateways, on either side of the West End Bridge. It also proposes the widening of the bridge itself, and has an estimated timeline of a decade.

The second most expensive project will be in the Strip District. It will cost more than $68.4 million and take about 10 years. In the Strip, the city tow pound site has about 1,100 feet of publicly owned riverfront that is not publicly accessible. The creation of City Landing Park will provide a green space in this area, which can also be “activated by complementary development, such as affordable housing and mixed-use development,” according to the report.

It also includes further development of the proposed “Allegheny River Green Boulevard,” a plan that has been in the works since 2009 and focuses on future opportunities for development, transportation and public open space for the communities along the river’s southern edge.

“Completing the Allegheny River Green Boulevard would connect the Strip to Lawrenceville and would increase opportunities to live car-free,” the report reads.

Other inclusions, listed on page 245 of the report, include enhancements to the Mon Wharf, the extension of South Side Riverfront Park and the creation of multiple trailheads throughout the city.

The report also explains that these are level five cost estimates, which have the lowest level of accuracy because it uses planning documents instead of construction drawings, which have a greater level of design detail. In a level five cost estimate, the actual construction cost may vary anywhere from 50% below the estimate to 100% above it.  The numbers represented in the report are the average between the high and low cost, but might not necessarily reflect the exact numbers of the finished product.

(The exception is the Allegheny Landing Park restoration project, which is already ongoing, so the actual budget was used for that project.)