Newlyweds Madison and Chris surprised their reception guests with their performance of the iconic dance routine from the hit 1987 film.

Outside of the typical planning for the post vows reception — seating chart, reception meal, first dance song, and the list goes on — couples sometimes find themselves with a few extra surprises to make it the “time of their lives.”

Madison Andreini and Chris Bell, hoping to have a reception that would leave guests speechless, had one choreographed dance in mind to wow their guests: the “Dirty Dancing” routine. It was a routine that proved to take two years of practice and, in Madison’s words, “perfecting.”

Madison and Chris met at West Virginia University. She was a senior at the time and he was a freshman after spending four years in the Marines.

“His roommate was hanging out with one of mine. We all started hanging out and Chris and I clicked immediately personality-wise,” says Madison. “He’s like a manlier man guy, but then he has massive conversations about “Twilight” and Nicholas Sparks. I thought he was so cool and so real.”

At first, Madison was a little hesitant to commit to Chris, but his persistence — including the delivery of a Nicholas Sparks book to her mailbox — won her over. Luckily for the pair, Chris’ persistence played a huge role in nailing the routine in the two years they had to learn it.

“Getting him to do it was no big deal at all,” says Madison. “He loved me and knew it would make me happy. He is not the dancer type so it was not easy for him at all, but he sucked it up. He wasn’t embarrassed, and he was just down to do it because I wanted to.”

Practices for the big day began even before their official engagement. As a huge fan of musicals and dance, Madison has always known she wanted to “wow her guests” with a unique performance at her wedding reception.

“I learned it off YouTube and taught it to both of us. It was not professionally taught to us,” says Madison. “I didn’t grow up at dancing school, but I taught myself dance growing up. Knowing he was a typical guy who didn’t dance, I told him we had to learn it early and do it with just small bits at a time.” 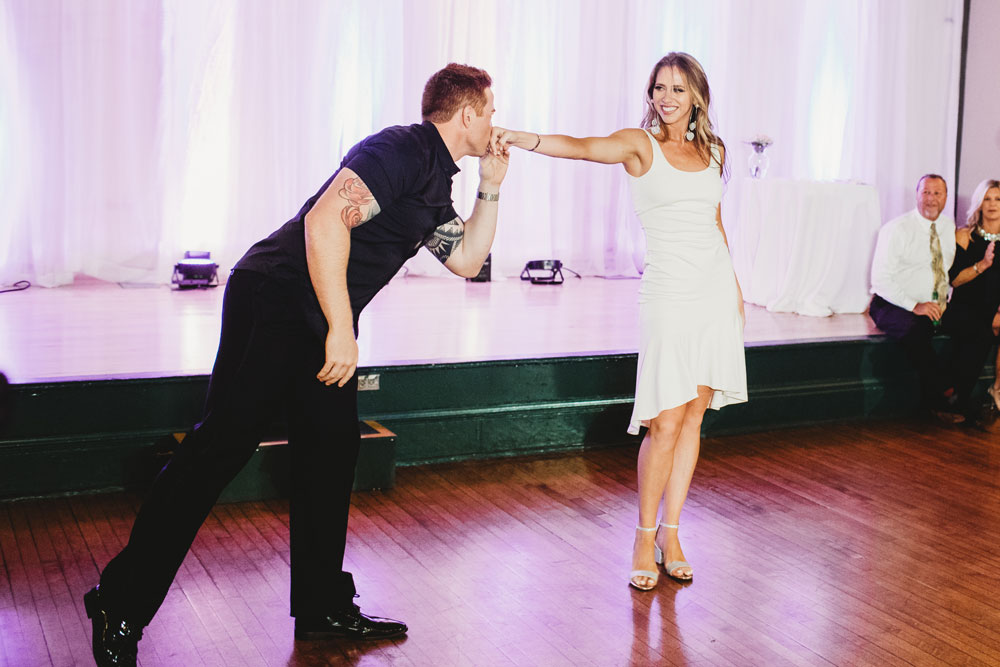 About once a month, Madison and Chris would go over what they had already learned in the past practices and slowly add a little more. Closer to the date of their wedding, they practiced almost daily.

Following their ceremony, the guests arrived at Soldiers and Sailors where the reception was to be held. Of those walking into the hall, only Madison’s parents and the girls in her bridal party knew about the surprise. To avoid Chris being a ball of nerves the entire night, they planned for the dance to take place closer to the start of the reception.

The pair snuck away and changed into new outfits to match Baby’s pink dress and Johnny’s all-black top and bottoms. When they returned, DJ Dave Kleba from Mobile Mix announced for everyone to turn their attention to the dance floor where Madison and Chris stood in the starting position. It was then that the deep voice of Bill Medley blasted through the speakers. 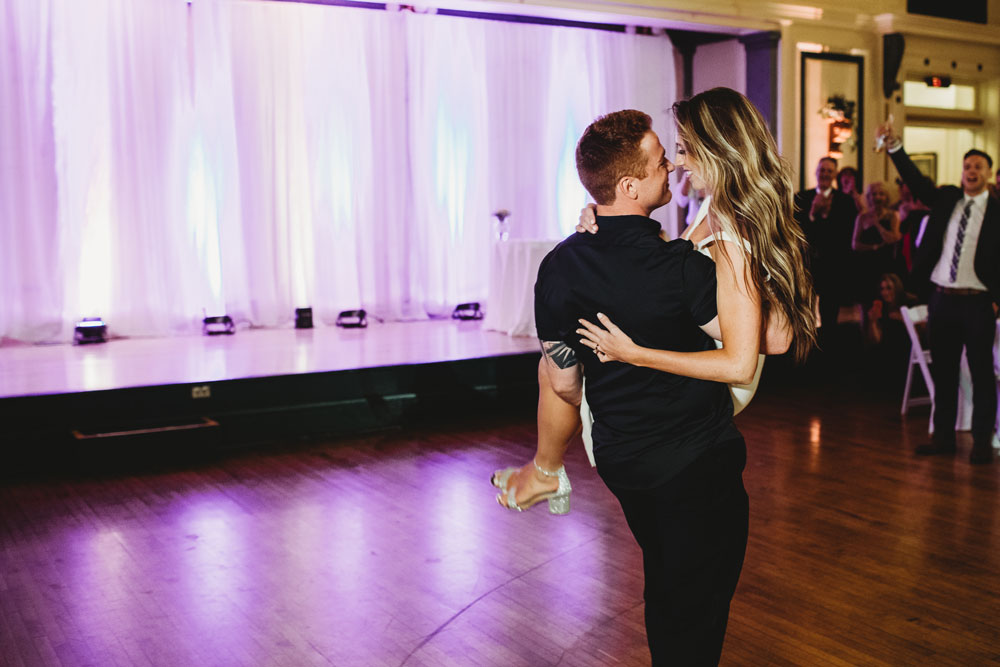 Even those who have not seen the movie may know that the lift between Baby and Johnny is an iconic, but difficult, moment in the routine. However, Madison and Chris decided to leave it out for more than just safety precautions.

“People were upset we didn’t do the lift. But I was more just about the dance,” says Madison. “I wanted the dance to be perfect. There are a lot of other brides and grooms who do the dance but only really steps that are similar. I wanted the steps to be the exact ones.”

Reflecting on the day, Madison finds herself as a huge advocate for surprise dances in the reception if a couple is looking for the “wow factor.”

“I think it depends on the person. For example, I am the person that likes the attention. But, I know some brides who are anxious about even just the day and having all that attention on them,” says Madison. “I think if you are a person like me, and looking for a ‘wow factor,’ I would recommend it all day long… Everyone is getting married. I went to 12 weddings I went to last year, and all the weddings kind of blend together unless you have that ‘wow factor.’”