The Allegheny Riverfront space — its largest in the chain — features outdoor seating and an extensive food menu. 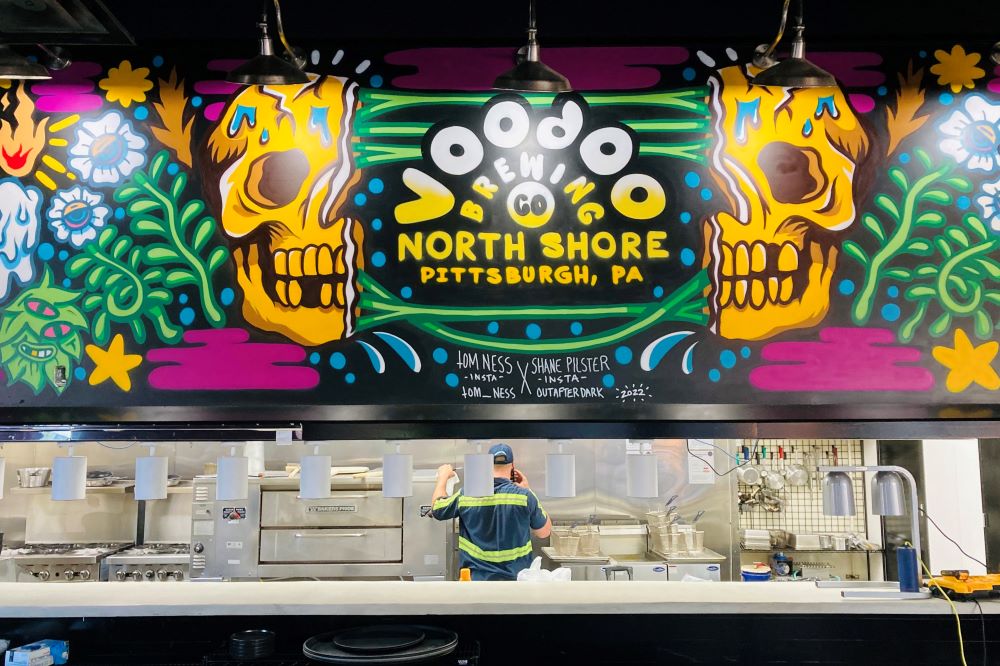 There’ll be good vibes (the flagship beer and the energy) flowing on the North Shore this Saturday when Meadville-based Voodoo Brewery opens its largest pub to date.

“It’s turning into something really special,” Partner Jake Voelker says about the growing list of locations. “We’ve always been in harder to reach locations, which is a big part of our brand. This is a totally different demographic and we’re really excited about it.”

Voodoo’s other Pennsylvania locations include Erie, Homestead, State College, New Kensington, Houston, two spots in Meadville, one in Indiana, Pa. and a shipping container pop-up brewery in Conneaut Lake. The first out-of-state franchise opened in Cleveland and another will make its debut in Fountain Inn, S.C. on Aug. 27. A Las Vegas hotspot is also in the works. Voodoo employs more than 100 people. 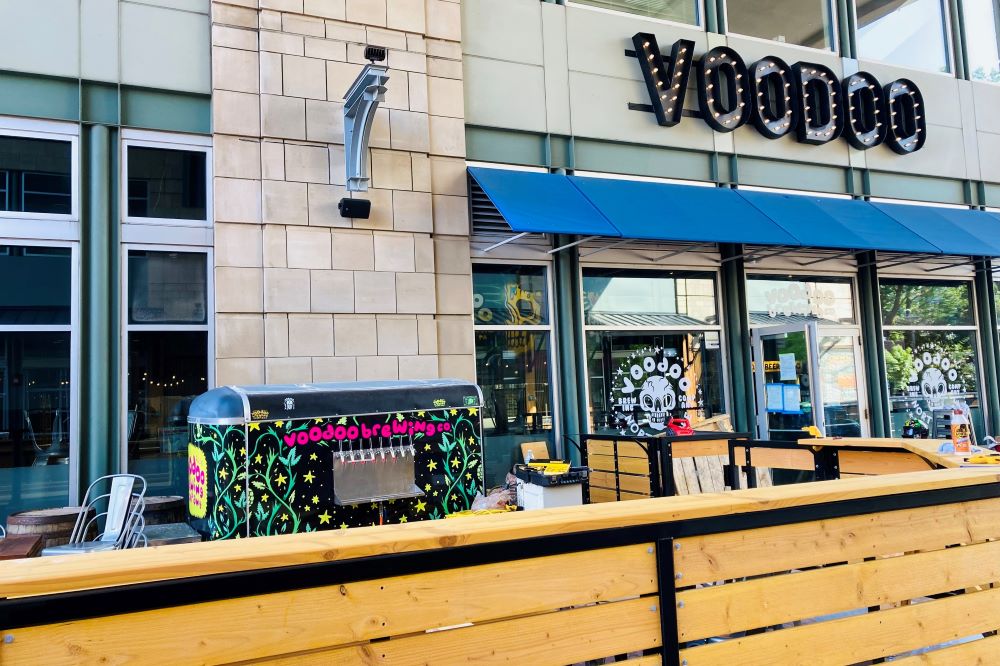 Voodoo North Shore has indoor and outdoor seating for 193 people, along with a fire pit and a view of the river. A service window opens to the 5,300-square-foot patio, allowing revelers to order a beer while catching some rays. Voodoo also makes a line of Project X88B88 ELXR hard seltzers, slushies and signature, barrel-aged cocktails.

All of the company’s beer is produced at the original, 60,000-barrel-capacity Meadville site, which opened in 2005, under Production Team Leader and Head Brewer Curt Rachocki. His brother, Matteo Rachocki, is CEO.

In addition to alcohol, the new space features an extensive food menu. Chef Dave Gordon helms the kitchen on the North Shore. The Minnesota native is used to fast-paced food service in entertainment districts such as Margaritaville at Mall of America and at Universal Studios in Florida. Voodoo’s in good company on Pittsburgh’s North Shore, which boasts Shorty’s Pins x Pints, Southern Tier Brewery, Mike’s Beer Bar, Tequila Cowboy and BURN by Rocky Patel and Burgatory. 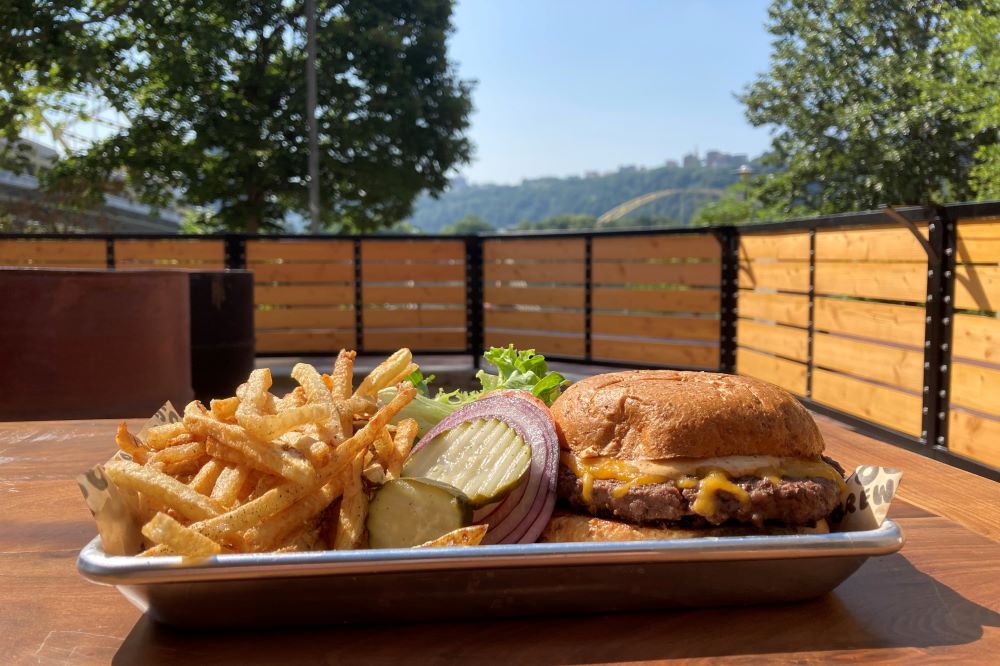 The Chimichurri Steak with Truffle Frites is locally raised Wagyu filet tips marinated, seared and topped with house-made chimi served with fresh-cut truffle fries sprinkled with parmesan and rosemary. The dish comes with a side of roasted garlic pesto aioli for dipping.

Burgers (including a vegan option: the Quinoa Chickpea Burger) and sandwiches are served on Mancini’s bread made with Voodoo’s spent grains. In another nod to the Steel City’s culinary institutions, the Voodill Pickle Pizza features house-made roasted garlic pesto, shredded mozzarella and Pittsburgh Pickle Co. pickles. 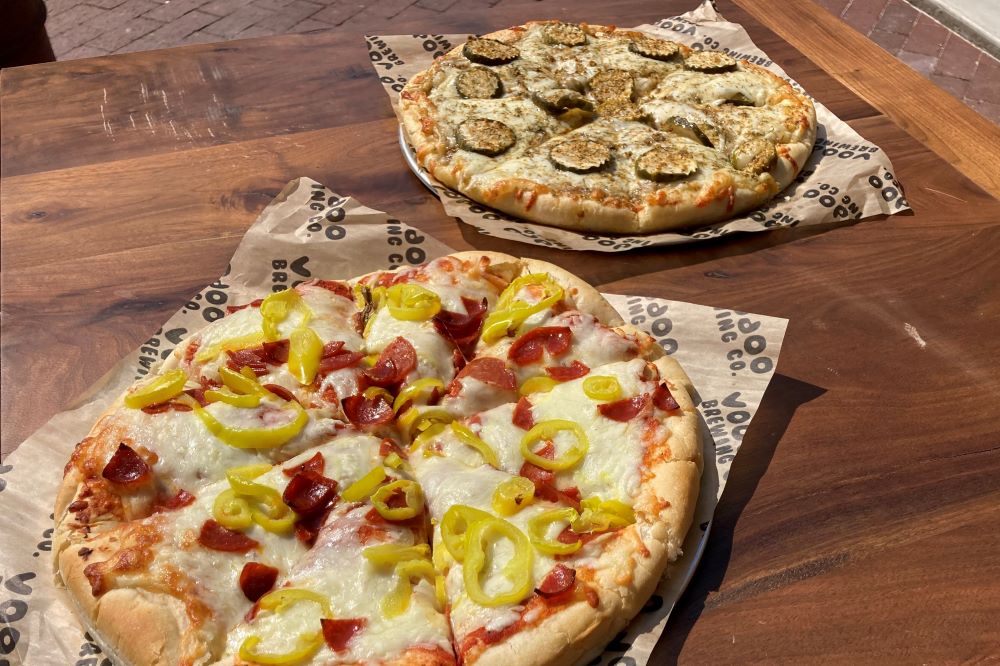 Gordon has a flair for Asian-style cuisine, so he added a variety of noodle bowls to the mix. The Pork Belly Banh Mi Bowl, for instance, features chilled pad thai noodles served in an agave vinaigrette topped with seared sous vide pork belly, daikon radish slaw, jalapeno and fresh herbs.

“There are lots of flavors on this menu, lots of vibrant colors and lots of love on the plate,” Gordon says. “We took tastes from all over the world to bring something new to the North Shore. I’ve been searching for a place that fits my vibe. Like Margaritaville, Voodoo is a lifestyle.”

Thanks to the Kyoo online ordering app, customers can place orders for food, drinks, merchandise and takeout beers from wherever they are in the pub.

“It’s a big change for us in terms of our service model and what we’ve been doing for over a decade,” General Manager Chase Fraicola says. “It’s closer to traditional tableside service than Voodoo has done in the past. We’ll have employees walking around helping people with the technology. We don’t want to exclude anyone.”

Voelker, a U.S. Army veteran, joined the Voodoo ranks in 2013. He heads the brewpub franchise group, but you can often see him pouring a beer or giving the paint a touch up. Getting ready to open a new spot is a team effort and it was an all-hands-on-deck situation to get the North Shore taproom up-and-running.

The crew overhauled the former Rivertowne Brewing space, which includes Voodoo’s brand of graffiti-style, skeleton-themed artwork from Tom Ness and Shane Pilster. Other decorative touches include a living plant wall and skull sconces made from pieces of a Carrie Furnaces smokestack, compliments of Rivers of Steel. 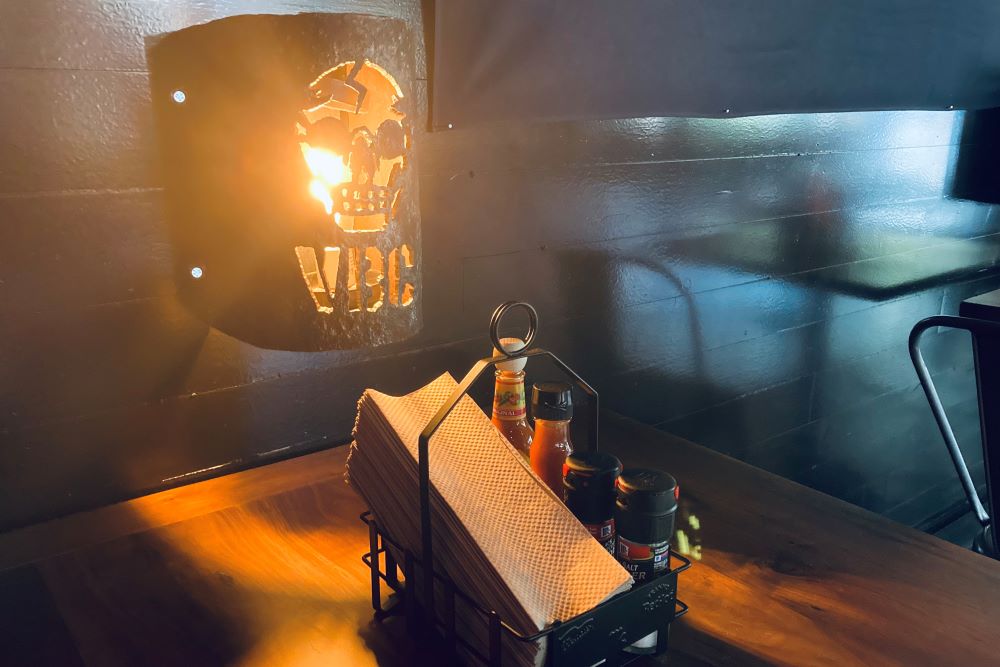 While each Voodoo location is different, charity is at the company’s core. Voelker says he’s looking forward to partnering with local nonprofits that hold fundraising walks and other events on the North Shore. Sections of the Voodoo facility can be rented out for private functions.

“From the inception of Voodoo Brewing, we’ve always had a pure focus on giving back to as many people as we possibly can,” he says. “This company is run with a sense of humility.”