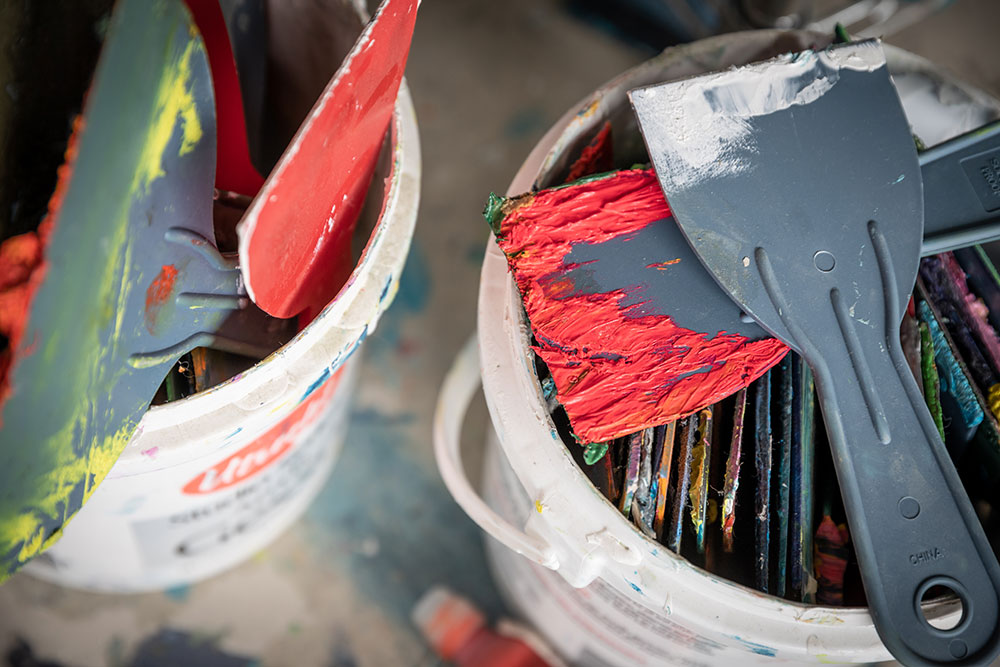 Sometimes, before you become the thing you always wanted to be, you have to pay the bills.

It’s the reason many artists and makers are forced to relegate their craft to side project — often for years — before they can find the support or the following they need to take it full time.

These days, a healthy social media presence and the help of local arts organizations, including Monmade and the Union Project, can be the springboard to launch a brand.

Such was the case for three of Pittsburgh’s most talked about, talented and Instagram-worthy artists. For painter Mia Tarducci, ceramicist A.J. Collins and builder John Malecki, the passion for their chosen craft is finally, and literally, paying off, and what that looks like is pretty incredible. 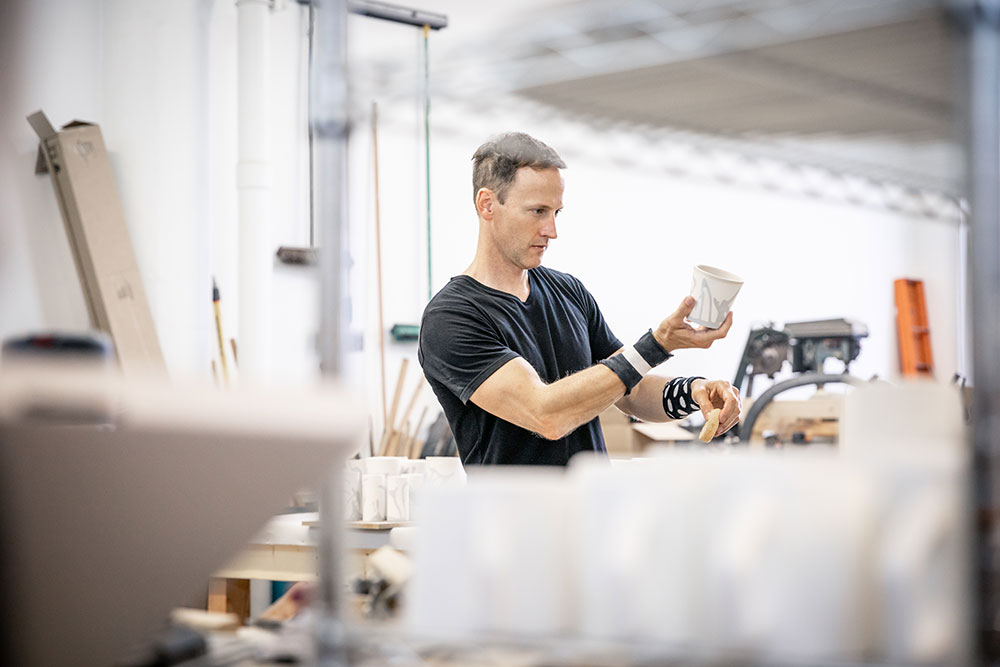 It seems like a minor thing, a throw-away factoid, until you see the smooth, saturated glazes on his bowls, vases, tumblers and mugs. The quadraxial blends are his own creation and adorn each vessel in geometric, almost three-dimensional, patterns.

The resulting coloration is vivid and distinct. Many of his clients have described it as surprising. His wife, Elizabeth Chandler, says it actually is not surprising at all given the way he views the red and brown spectrum. 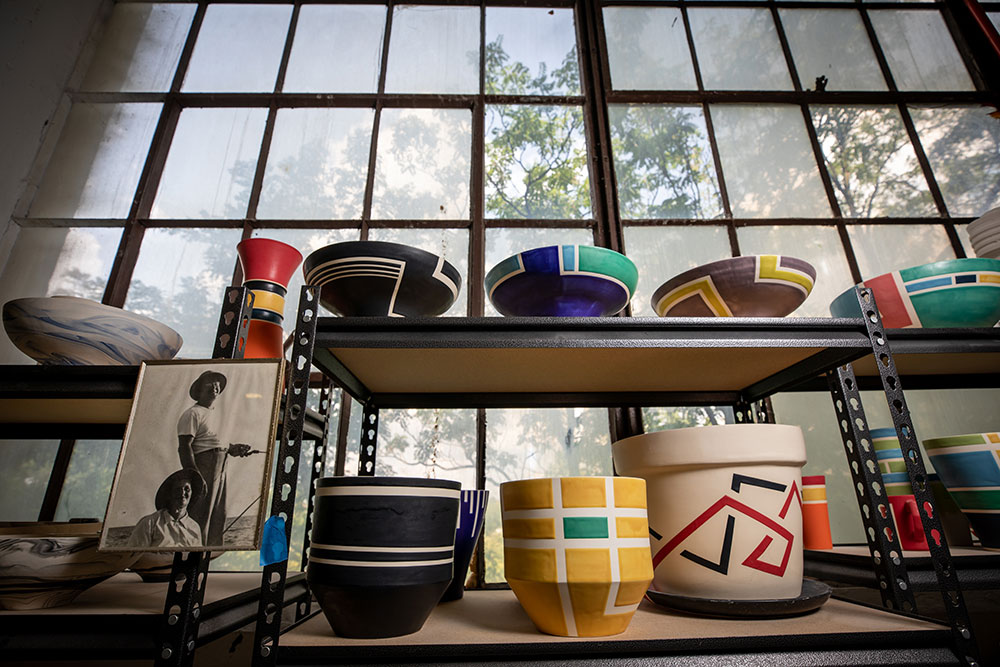 Collins just shrugs it all away. Color, he believes, is subjective, and whether his work is the result of his unique rods and cones or a well-honed knack for combining color, he’ll take it.

“And I’ll run with the results,” he says.

Collins grew up along the coast of North Carolina, attended college in the mountains and earned his master of fine arts in poetry. He spent much of the ensuing decade writing or teaching others how to write in far-flung places such as California, Maine and South Africa. And though he snuck in classes at the Penland School of Craft and the Irvine Fine Arts Center and studied with some talented potters, for much of that time, pottery was simply a welcome distraction from the hours spent in front of a computer toying with words.

That changed when a collector from Long Beach, Calif., noticed his work and started promoting it among friends and other collectors. It was the first time that Collins thought of himself as something other than a writer and teacher. He began to wonder if his dream of spending entire days throwing clay could be possible.

“I was flattered that others saw what I saw, but it still didn’t seem like a real option,” Collins says.

Particularly when his wife took a position managing cases at Glade Run Lutheran Services, a local nonprofit that helps families and kids with behavioral problems. To Collins, Pittsburgh didn’t seem like the kind of place where a serious artist went to find inspiration. 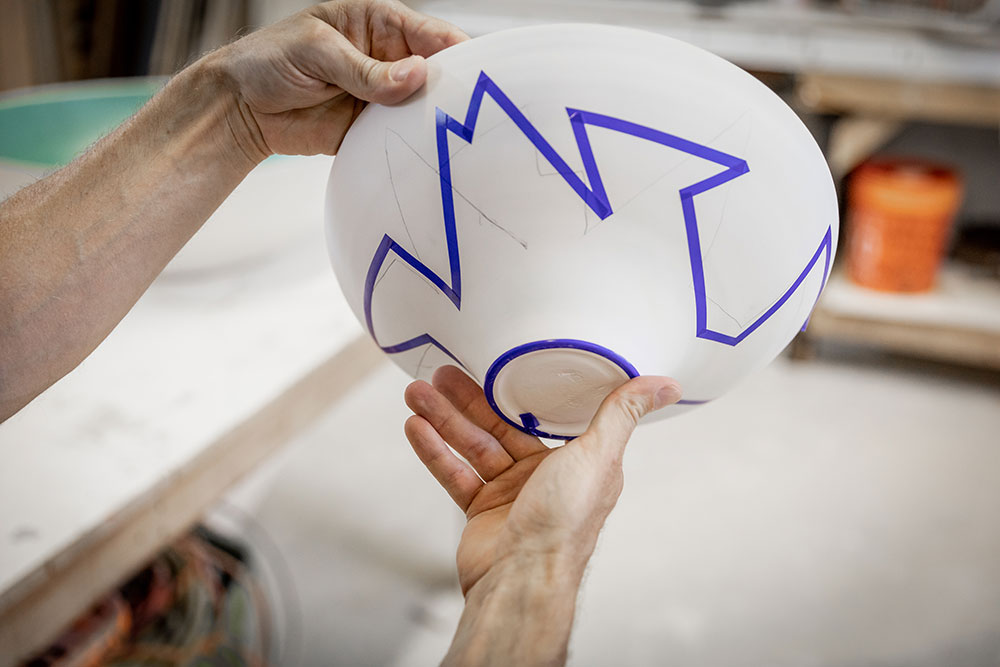 “I figured ‘We’ll stay for a couple of years, I’ll hate it and we’ll move,’” Collins says. He took a research job with a boutique law firm that focuses on bribery and fraud investigations and settled in.

But rather than the banal existence he expected, Collins found himself at the center of an active, supportive ceramics community. And in the ceramics world, community is key.

Ceramics is as much science as art, with all of the room for error that implies. A few degrees north or south of the intended temperature in a kiln can yield a vastly different product. So most ceramicists aren’t shy about sharing notes and methods. It’s how the field grows. It’s how the art evolves.

In Pittsburgh, that community, particularly through Monmade and at 7800 Susquehanna, where he has a studio, nurtured Collins, providing him with opportunities he didn’t have in other cities, including a featured spot as an emerging artist at the Three Rivers Arts Festival and a residency at Fallingwater.

In February, Collins finally quit that research job and began doing ceramics full time, selling his creations in galleries or creating exclusive lines for home interior stores. He was recently chosen to create a series of sconces for a massive lighting fixture at Google’s offices in Bakery Square. 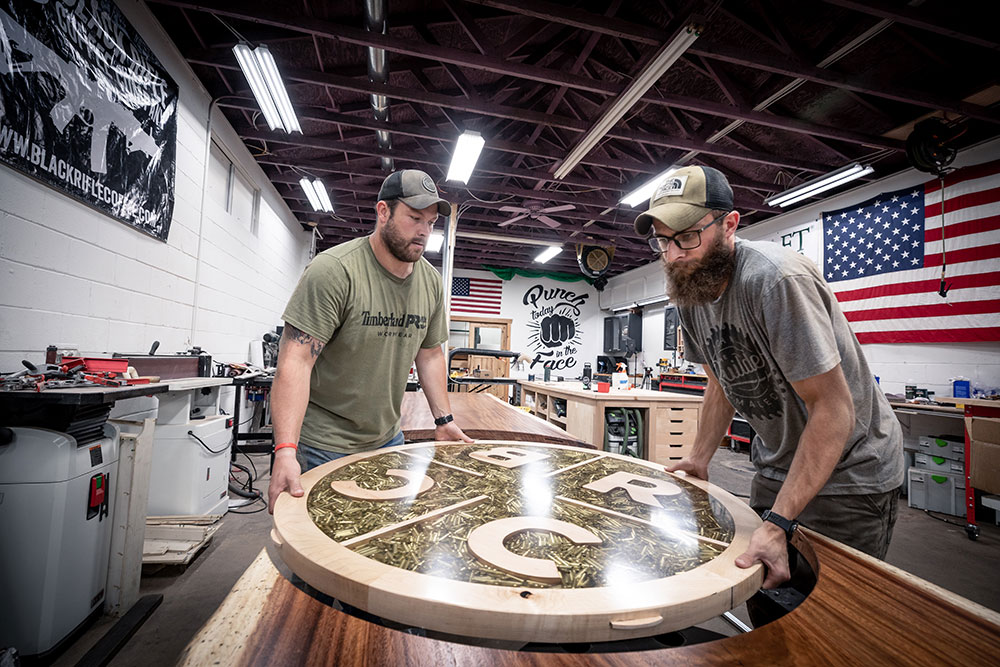 At one time, not so long ago, the name John Malecki was more synonymous with football than with furniture.

That time may be over.

John the Builder, as Malecki has branded himself, was a homegrown member of the University of Pittsburgh Panthers and Pittsburgh Steelers teams. Today, he has become the face of the Pittsburgh maker movement, building a vast library of how-to videos for the do-it-youselfers who like their guidance delivered with with a side of humor (and a good beard).

“There’s a ton of opportunity in working with your hands,” Malecki says. “My passion comes from inspiring others to do the same.” 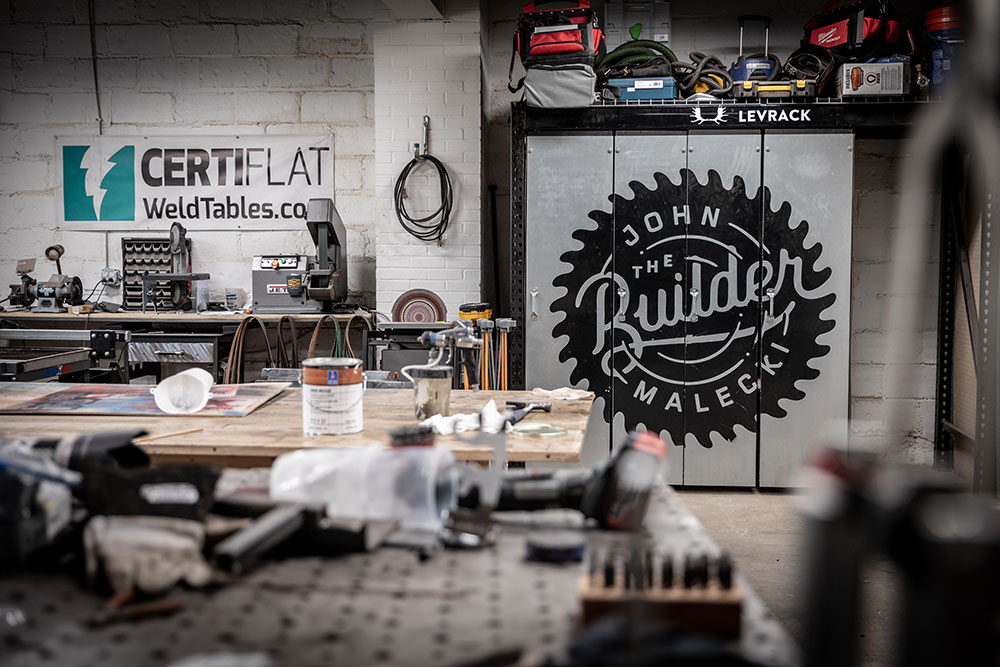 That passion was planted when Malecki was a boy growing up in Murrysville with a father who liked home renovation projects.

“I was free labor,” Malecki says with a laugh.

But the days of re-shingling a dilapidated roof or mulching a newly planted garden soon gave way to Malecki’s dream of playing big-time football. He was a star for Franklin Regional’s 2005 state champion team before attending Pitt, where he earned a reputation that helped catapult him into the National Football League. In 2010, he signed with the Tennessee Titans as an undrafted free agent. By 2012, he was home, signing with the Steelers and cementing a place in Pittsburgh sports lore.

It was during his third, and last, season in the NFL that a friend of a friend broke his coffee table. For any other 20-something, the moment would be little more than a “remember when …” anecdote. For Malecki, it was the rekindling of that childhood passion for working with his hands, and the beginning of what would become his second career. Because when that coffee table broke, Malecki decided to make himself a new one.

It was a simple project — a few two-by-fours and two-by-sixes held together with basic joinery — but it was the first of many.

“After that, I kept collecting more tools and making more stuff,” Malecki says.

After the Steelers released him in 2013, he quickly joined fellow former Steeler Baron Batch at Studio A.M. in Homestead, where he spent his hours making custom furniture from reclaimed wood.

His most acclaimed work, perhaps not surprisingly, is inspired by the city and includes the 15-foot “Skyline” conference table with a striking plasma-cut CNC metal outline of Downtown, a desk made to mimic one of the city’s iconic bridges and a stunning piece he calls “The River Table.” It’s a live-edge walnut with a custom-cut glass inset that flows through the center like water. 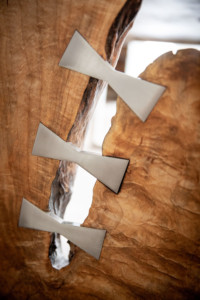 But what sustains him today is the same thing that started him on this journey as a child. He relishes the ability to bring a vision to life with his hands (and a few power tools).

Because he is self-taught, Malecki’s interests and business model have gradually, and naturally, followed the same path. Today, just 15 percent of his business is custom furniture. The rest is a product of good branding. He has a thriving social media presence, several sponsorships and a knack for inspiring others. He likes to show the weekend warriors exactly how he does what he does. So, in addition to the DIY videos, he also sells plans and step-by-step instructions for some of his more popular pieces and also reviews woodworking products.

He notes that his first career was imperative in launching his second, both because football taught intangible lessons on the power of hard work and because it gave him a base on which to build his brand.

“It’s why I built my social media following around my name,” he says. “Football is not the forefront of my brand, but it’s a segue to talking about my work and promoting the maker movement.” 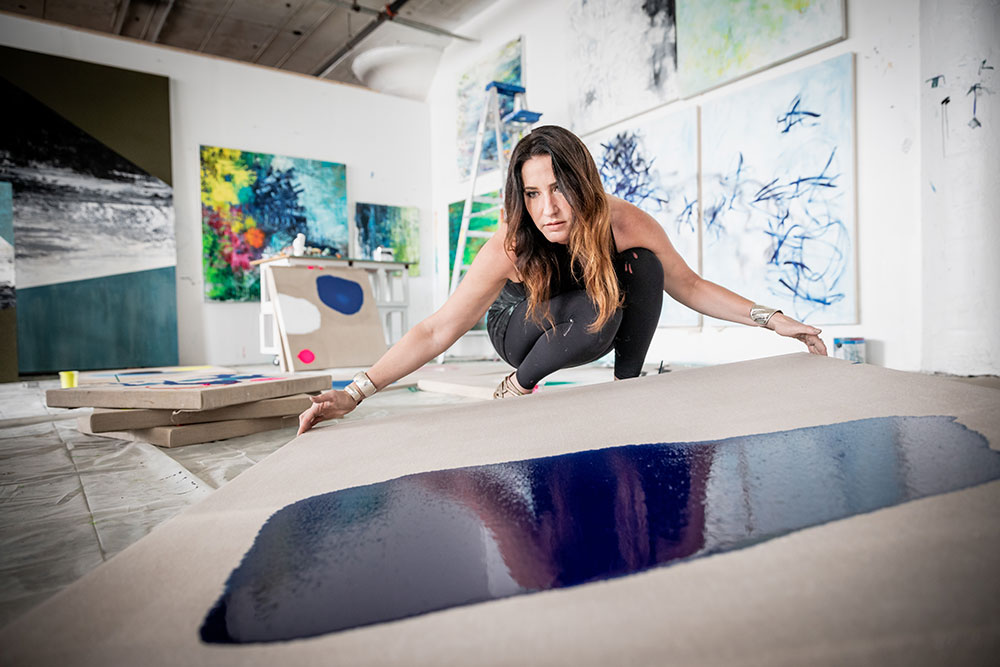 When she was a teenager, Mia Tarducci would walk the shores of Aquidneck Island in New England, stare out at the endless water before her and think, “Here’s this vast, enormous ocean, and I’m just this tiny thing in the face of it. And if I’m just a tiny thing, then my problems are really small.”

With that thought came relief, a reprieve from the inescapable angst of adolescence. So it is perhaps not a surprise that Tarducci, a Pittsburgh-based oil painter, is a lover of scale. She likes big, and bigger. She once cut a hole in the side of a building to extract a painting too large to squeeze through the doors. 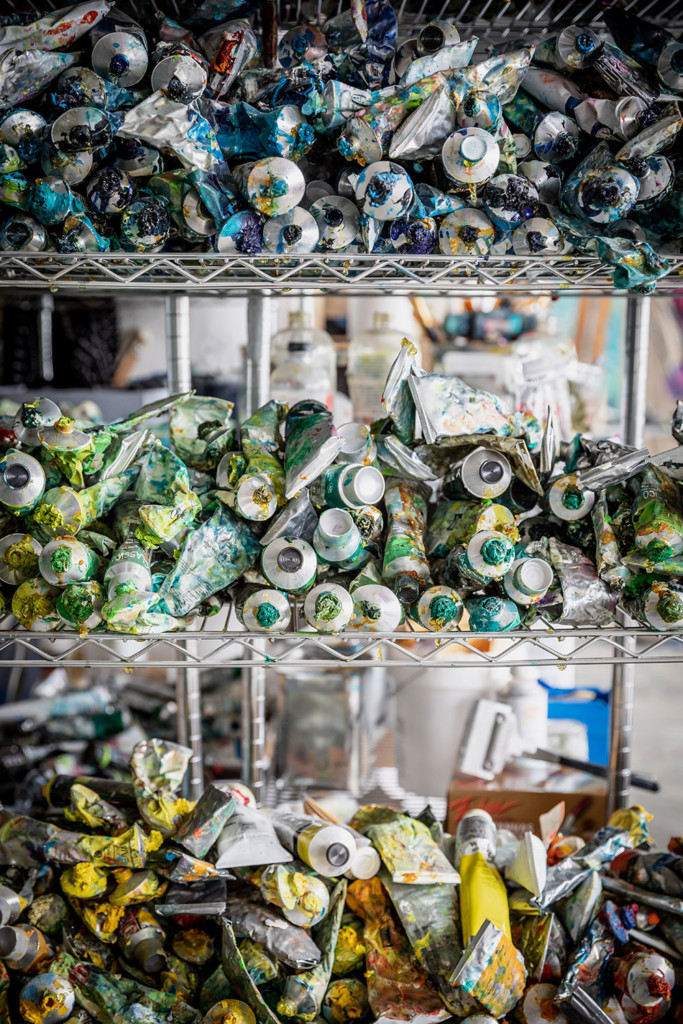 “I want to exist in the realm of the work, rather than it existing in my world,” she says.

That Tarducci thinks like this, talks like this — like an artist — is not surprising given her pedigree. Both of her parents attended the renowned Rhode Island School of Design, and she grew up in a house humming with creativity.

Because they were exposed to art at home, Tarducci’s parents steered their three children away from formal art classes. They tried to nurture interests in other subjects instead. Tarducci even went on to study languages at Georgetown University.

But it didn’t matter. Art came for her. It came for all of them.

Today, her younger brother is a glass blower, her older brother is a graphic designer and she is a painter known for the enormity of her work and the vibrancy of its color.

That visceral need to create arrived during Tarducci’s fourth pregnancy. Her 21-week ultrasound showed cysts in the baby’s lungs that were compressing the organs. As she traveled across the state to seek out specialists, she began thinking about her life and the life growing inside her. 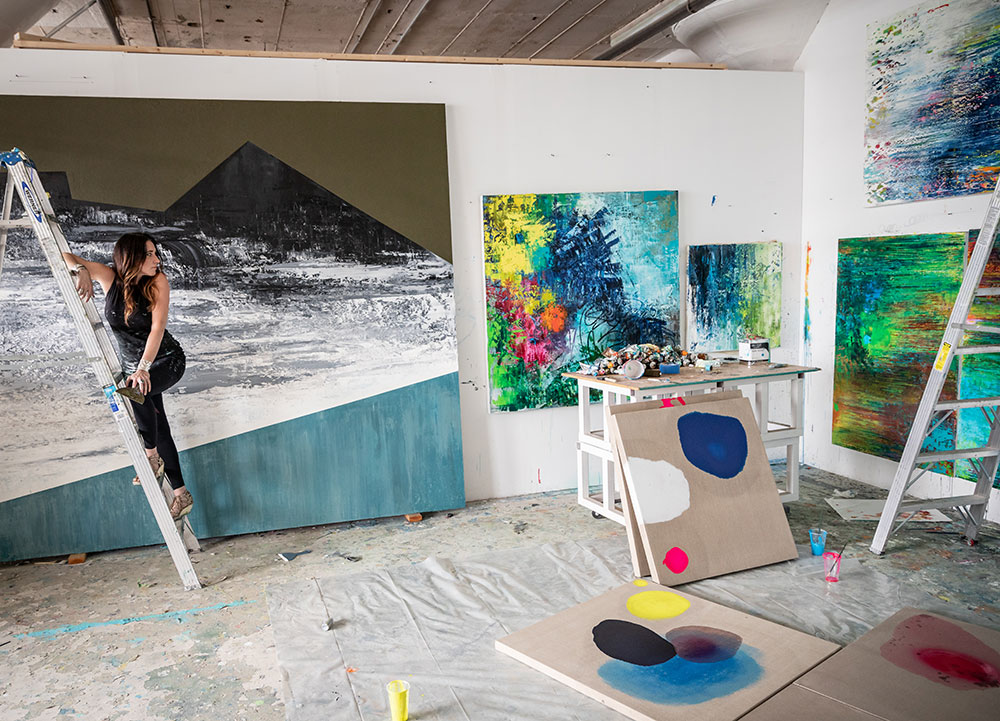 “Life is so very, very, very fragile, and we only have one,” she says. “I realized I needed something outside of my home, something for myself.”

That something was art. She began small, painting the birch trees from her childhood backyard from memory. Eventually, she had a collection of 24 pieces. In the midst of it, she painted an abstract. It was an anomaly, something to break up the monotony of bark and branches, but then a friend saw it and immediately asked to buy it. Tarducci was stunned. She wondered, “Is this something I could do?” 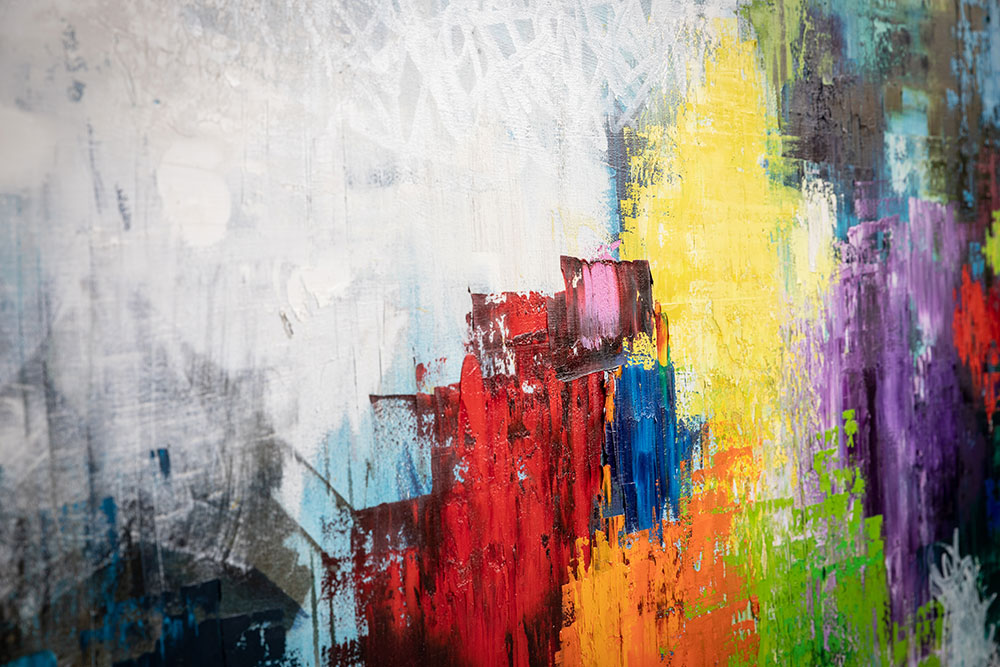 It was. Tarducci found an affordable studio at nonprofit Bridgeway Capital’s 7800 Susquehanna Street maker space in Homewood that gave her the room to produce her works. By 2014, she was named the Pittsburgh Center for the Arts Emerging Artist of the Year. She’s been featured in the Carnegie Museum of Art three times. Her work hangs in, among other places, Nemacolin Woodlands Resort, Superior Motors and UPMC Children’s Hospital of Pittsburgh. She recently completed a 7-by-24-foot piece for an undisclosed NFL owner’s home.

Clients have repeatedly told Tarducci that her work makes them happy, which is not surprising given its size and sense of urgency, as if a surge of energy ran right into the canvas.

“When I start something, I tend not to start sheepishly,” she says. 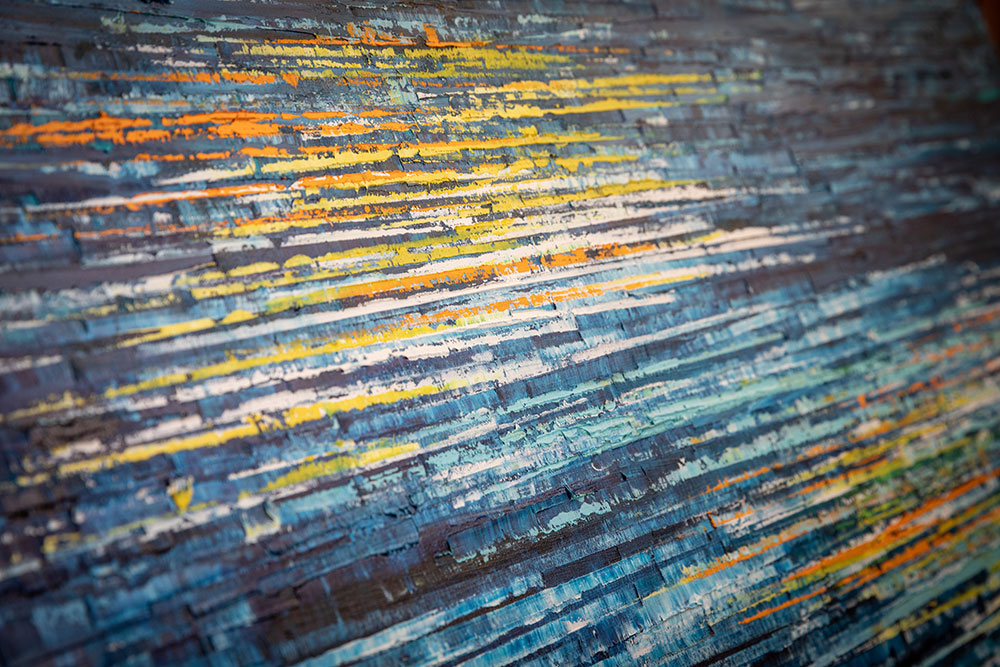 She picks up a tube of paint and drops it. She walks to the canvas and attacks it. She expresses what she feels as she feels it.

“It’s a nonverbal dialogue that is always changing and always exists,” she says. “It goes against our narcissistic point of view as humans. You become a part of something greater than you.”