The plan resulted in significant changes to the city’s skyline but was offset by a sharp downturn in the local economy. 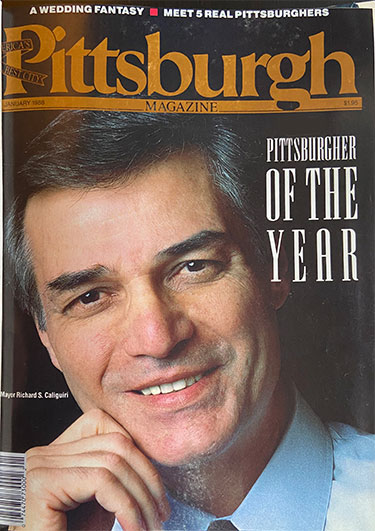 Within days of winning his first election in 1977, Pittsburgh Mayor Richard Caliguiri unveiled his plans for the second installment of former Mayor David L. Lawrence’s plan for urban revitalization. Renaissance II began as the city suffered through a widespread economic slump driven by the loss of thousands of industrial jobs, mostly in the steel industry.

The economic downturn was among Caliguiri’s greatest challenges as mayor, but his efforts helped initiate Pittsburgh’s transition to a more diversified economy. Those efforts earned Caliguiri Pittsburgher of the Year honors for 1987.

New developments that arose from Renaissance II included improvements to PPG Place, One Oxford Centre and the BNY Mellon building. There also were developments at Station Square, the institution of the Pittsburgh Technology Center, and construction of the light rail system.

Caliguiri also established The Great Race in 1977, which was renamed in his honor after his death in 1988.