From the modern to the minimalist, three very different local renovations that will inspire you. 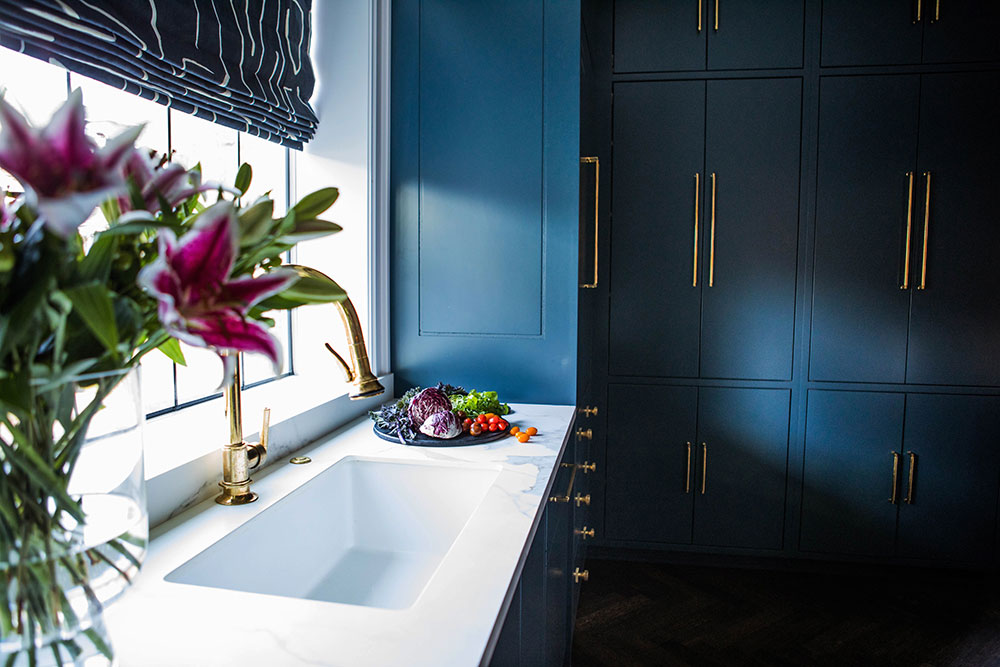 When it comes to interior design, the kitchen may be the most demanding room in the house. It needs to have equal doses of beauty, durability and utility in order to withstand the modern family’s expectations and cooking habits. It’s a tough task, but three amazing kitchen transformations — an Asian-inspired approach in Shadyside, a cool-meets-classic combo in Aspinwall, and a modern marvel in the South Side — prove that homeowners really can have it all. 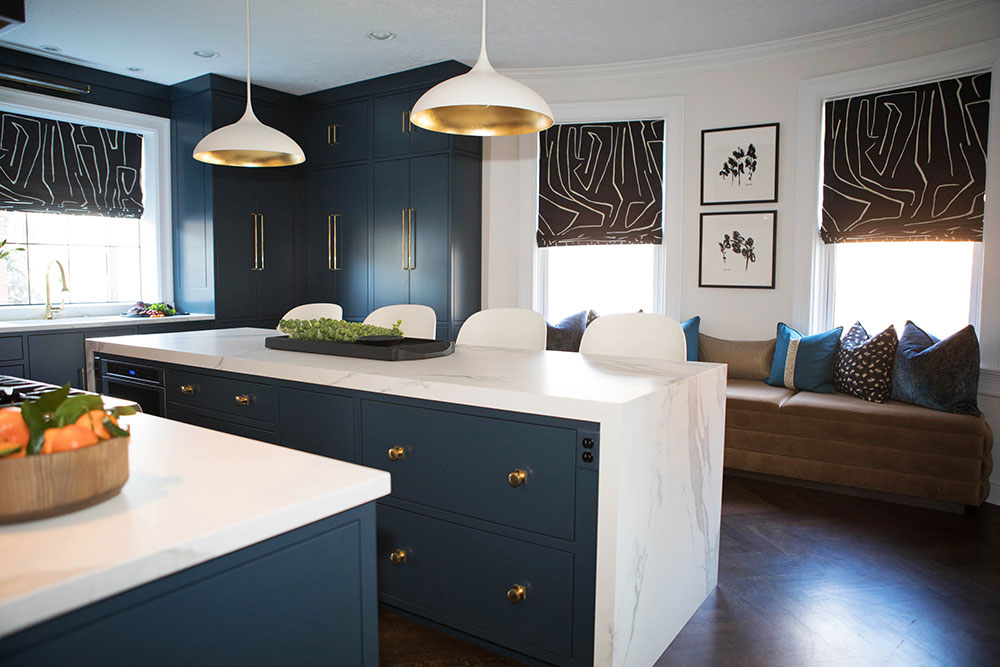 Molly Singer had a mess on her hands.

The kitchen of the century-old colonial in Aspinwall had been partially renovated multiple times over the years, resulting in a patchwork of styles and materials. Taken alone, none of the elements were objectionable, but together they created a design disaster. About the only thing holding the kitchen together was its prevailing color — brown. 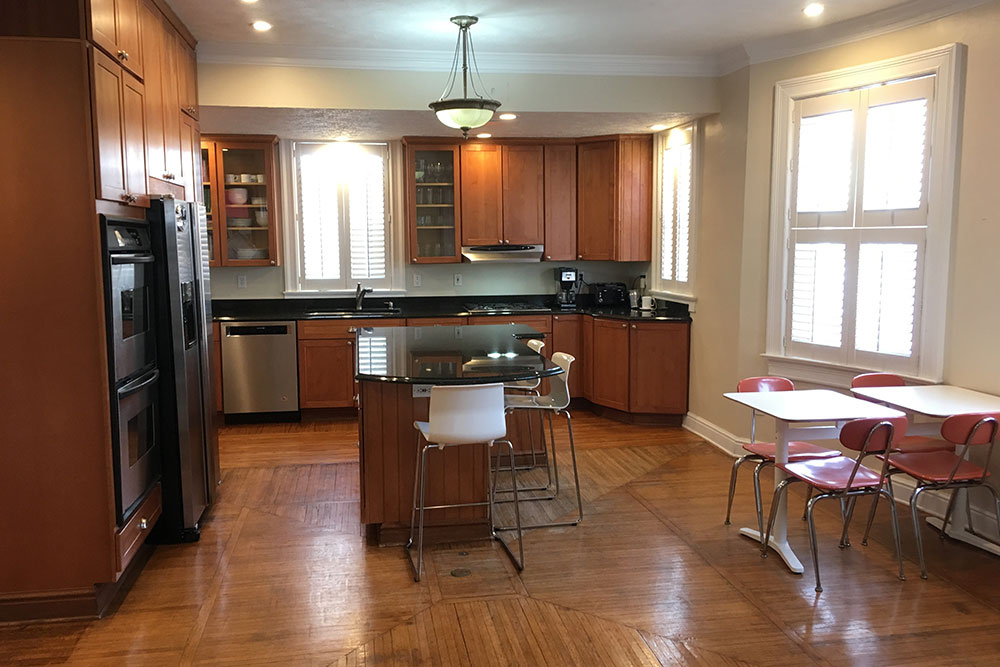 Singer was direct with her client: “We have to rip all of this out and start over.”

The client didn’t object, but she also didn’t have a vision for the space. Fortunately, Singer had worked with her on a previous home, so she understood her modern aesthetic and willingness to take risks. Singer immediately came up with two bold design elements that would end up steering the project — a black-and-white, marble mosaic tile and deep blue cabinets. 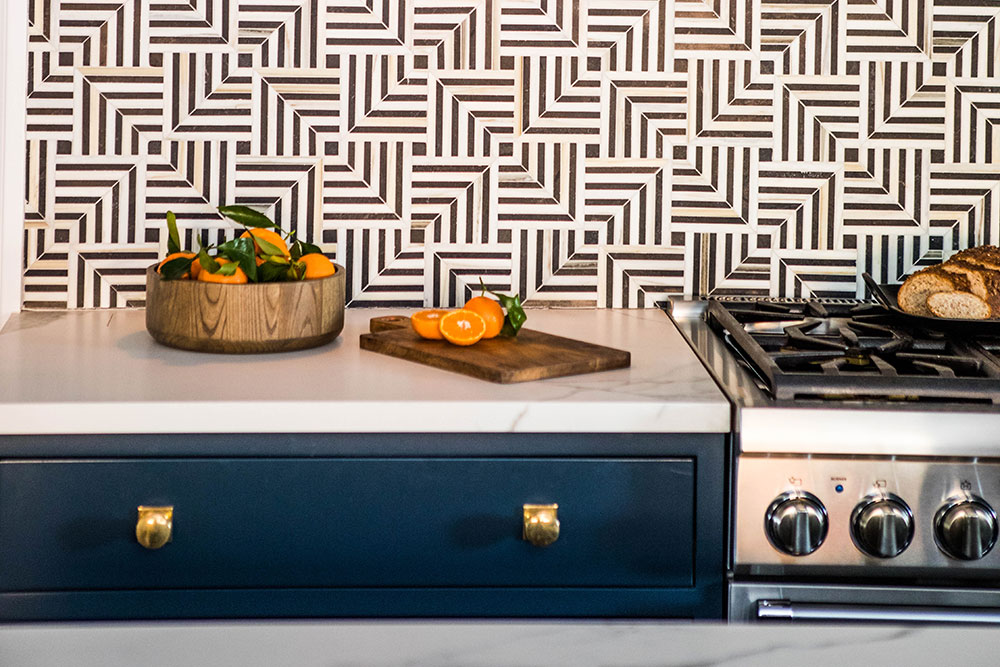 The tile was the starting point. Singer positioned it on the wide wall behind the stovetop, laying it in a graphic, overlapping pattern from counter to ceiling.

Instead, she wanted the cabinets to dominate the space. Working with her frequent collaborator, Bonura Cabinets, she created banks of custom, floor-to-ceiling storage painted in a deep, dynamic blue that shifts from almost black to slightly green as the sun peeks through the new leaded window behind the sink. 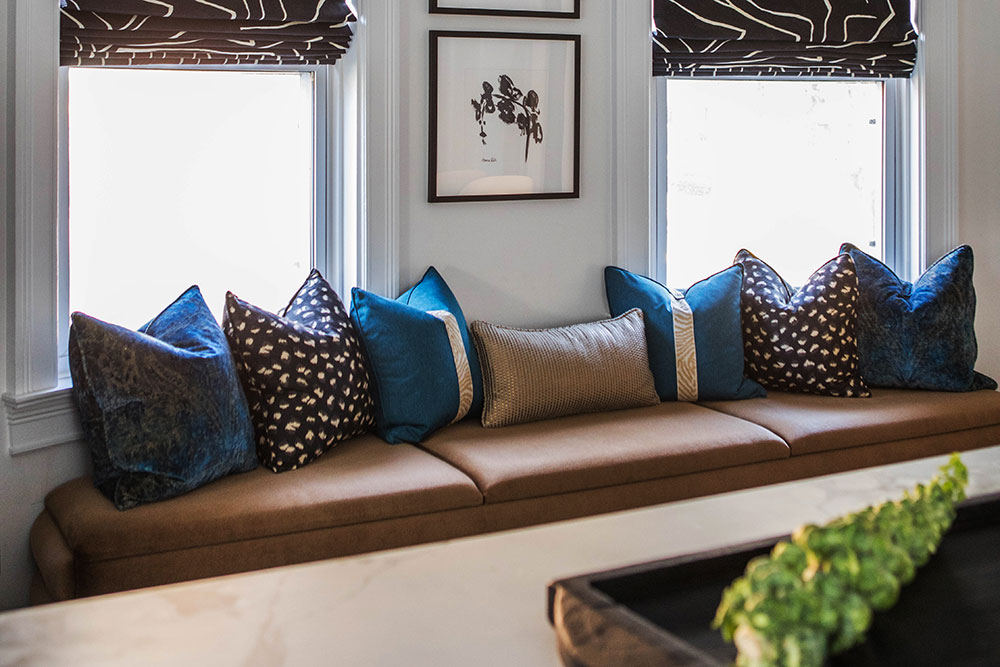 “It’s a big commitment to do your whole kitchen in such a rich color, floor to ceiling,” Singer says. “But I always knew it wouldn’t be a white kitchen, and the client was willing to take risks.” 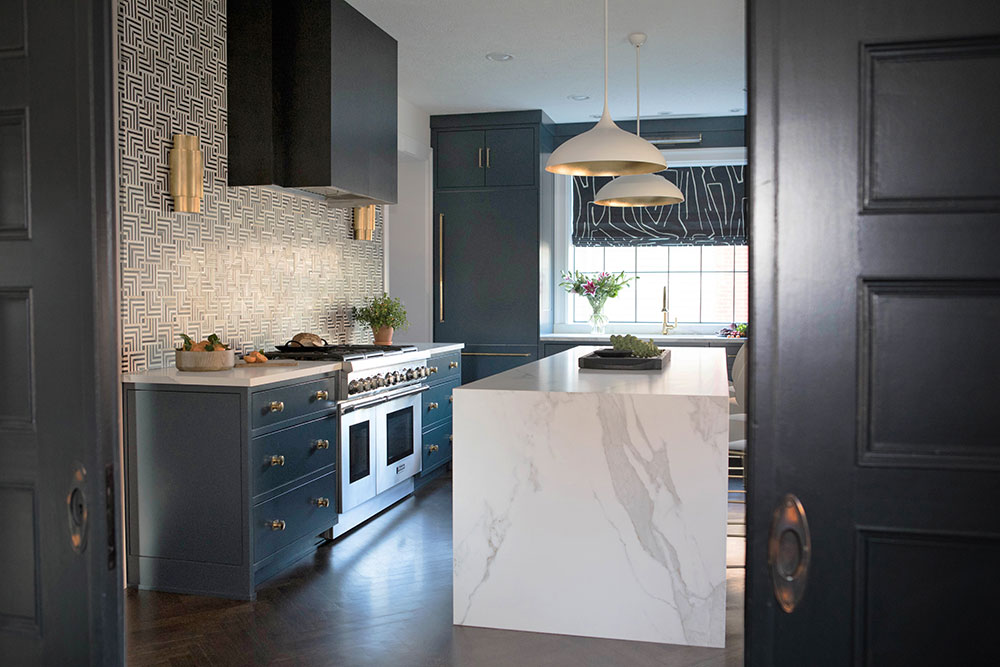 To make the contemporary kitchen look like a natural extension of the 100-year-old home, Singer balanced the modern base with soft, classic elements that add a feeling of timelessness: unlacquered brass hardware that patina over time; quarter sawn, white oak floors laid in a herringbone pattern; curving, gilded light fixtures that soften hard lines; and a channel-tufted, mohair banquette that provides extra seating.

Singer admits that the kitchen is loaded with daring design elements that many clients would reject as too trendy, but each one complements the next, balancing the hard with the soft, the bold with the subdued, and the contemporary with the classic.

“It’s all the things people would do if they were able to see the finished kitchen before they made the individual choices,” Singer says. 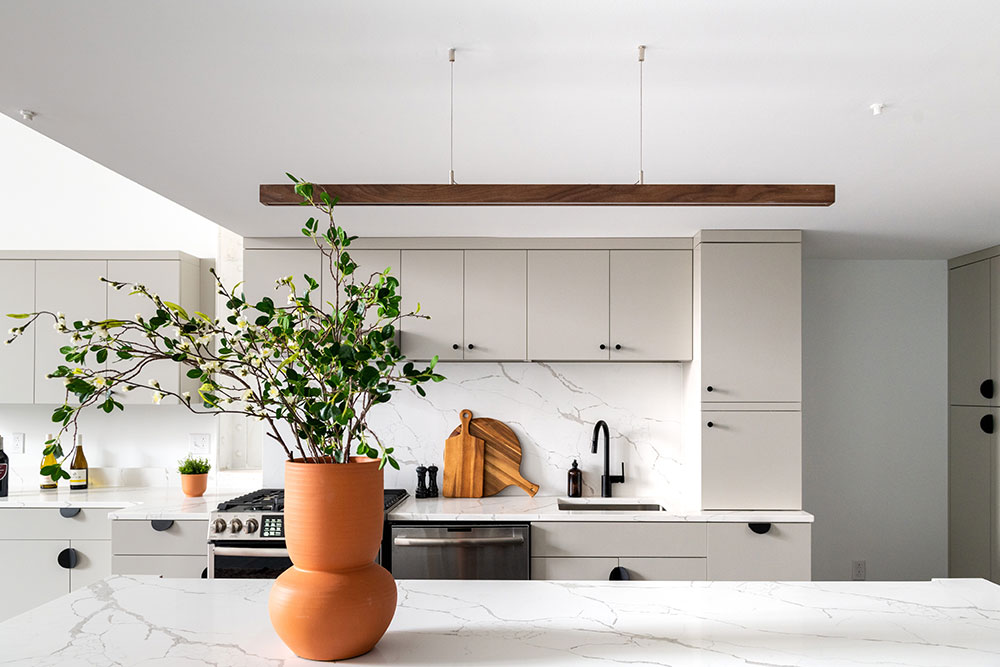 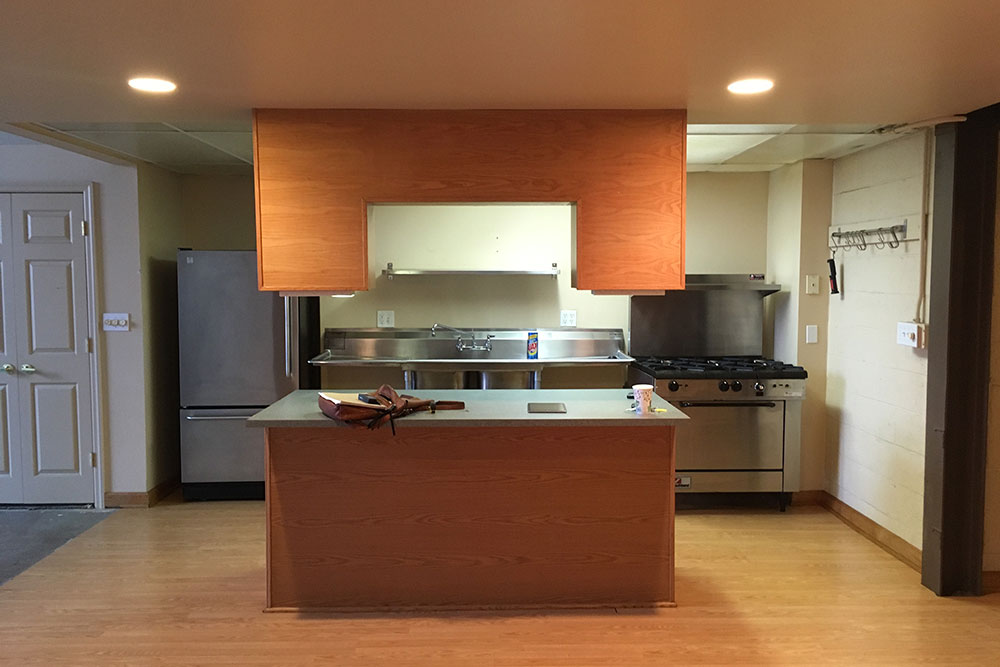 The floors were vast stretches of polished concrete and metal grating. A black spiral staircase connected the main floor to the loft area. And — the kicker — the kitchen was tucked into a poorly lit corner and housed oversized, commercial-grade appliances.

For Popple, whose clients were set on an airy, minimalist aesthetic, the project was going to be a challenge. 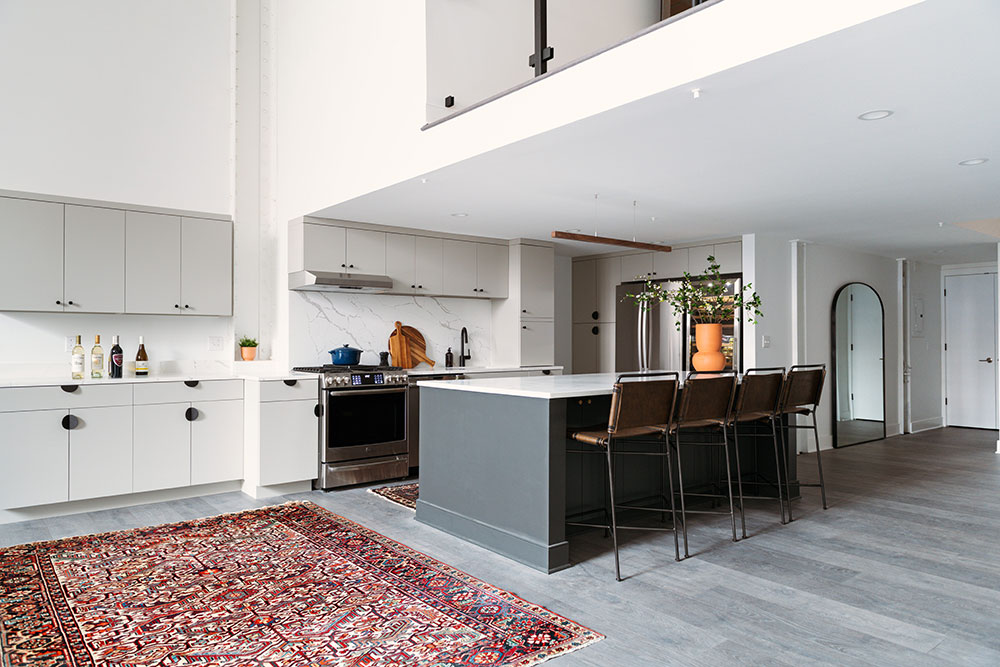 She quickly warmed up the space by covering the concrete floors with pet-friendly, wood-look laminate and replacing the inconvenient spiral steps with a straight staircase of floating treads.

“Because the loft is above the kitchen, it couldn’t be changed,” Popple says. “I knew I’d have to do something to embrace it.”

She attacked the problem with a trio of clever solutions. 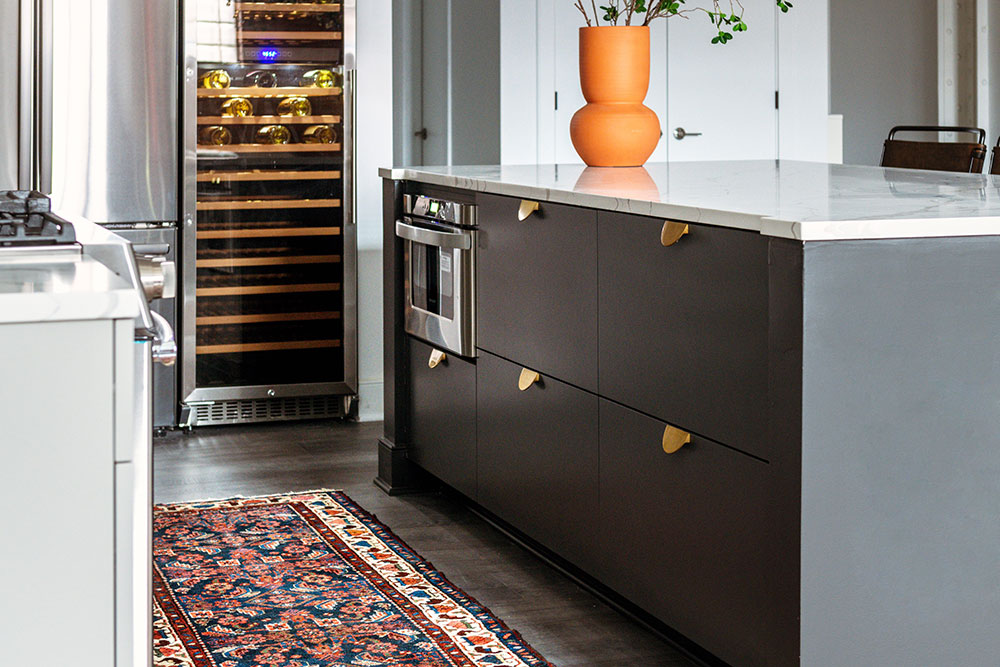 First, aided by general contractor Ken Karas of Residential Creations, she increased storage space by installing custom, slab-front cabinets by Drury Cabinetry, finished in a soft gray. A new floor-to-ceiling pantry was tucked into a corner at the far end of the kitchen (along with the client’s must-have, a 100-bottle wine fridge), and a small closet in the living area was replaced with a 5-foot-long bar to house glassware and liquor.

Then Popple installed a taller-than-typical, white quartz backsplash. The extra 6 inches of quartz forced her to shrink the overhead cabinetry but added a visually pleasing linear line that tricks the eye into seeing the ceiling as taller than it is.

Lastly, Popple chose an oversized island in a near-black finish that contrasts with the cabinets and pulls double duty as a breakfast bar and food prep area. The white quartz countertop mirrors the oversized backsplash and the brass drawer pulls add a touch of glamor to the neutral palette. 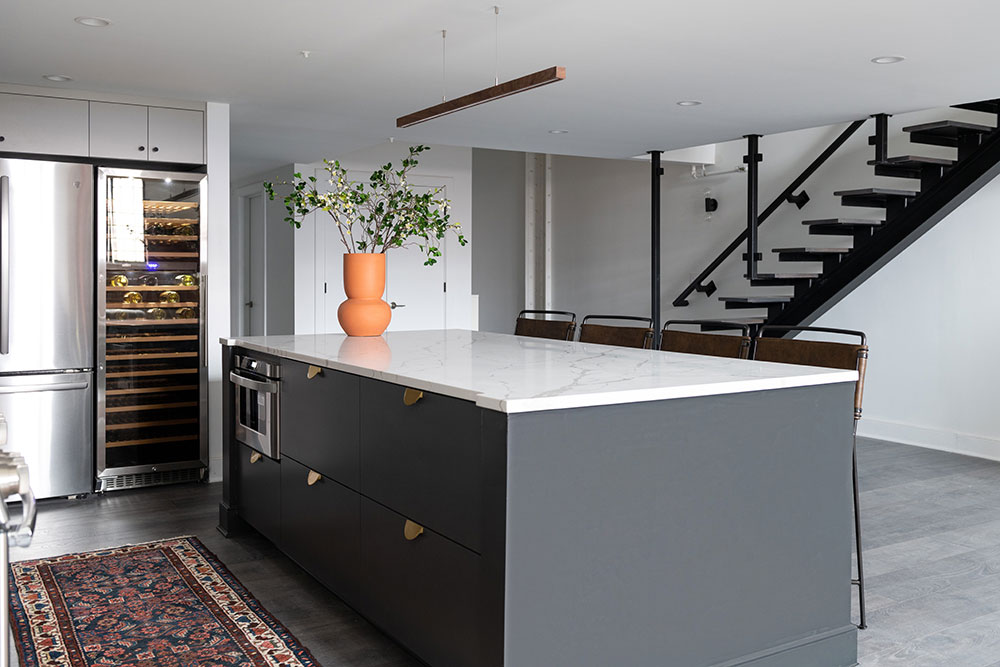 But Popple’s favorite element is the light fixture that hangs above the island. It’s a strip of LED lights hidden inside a length of hollowed-out walnut, hung higher than usual to draw the eye north.

“It’s simple, but the wood brings in a little warmth,” she says.

Popple also added a few pops of color — greenery in terracotta pots and a blue Dutch oven — when she styled the kitchen for photographs. But she removed it all when she turned the space over to her clients because they are a couple who take their minimalism seriously.

“They wanted nothing on the counters — nothing,” Popple says. “Today, it looks exactly as we left it. It’s their aesthetic, and they love it.” 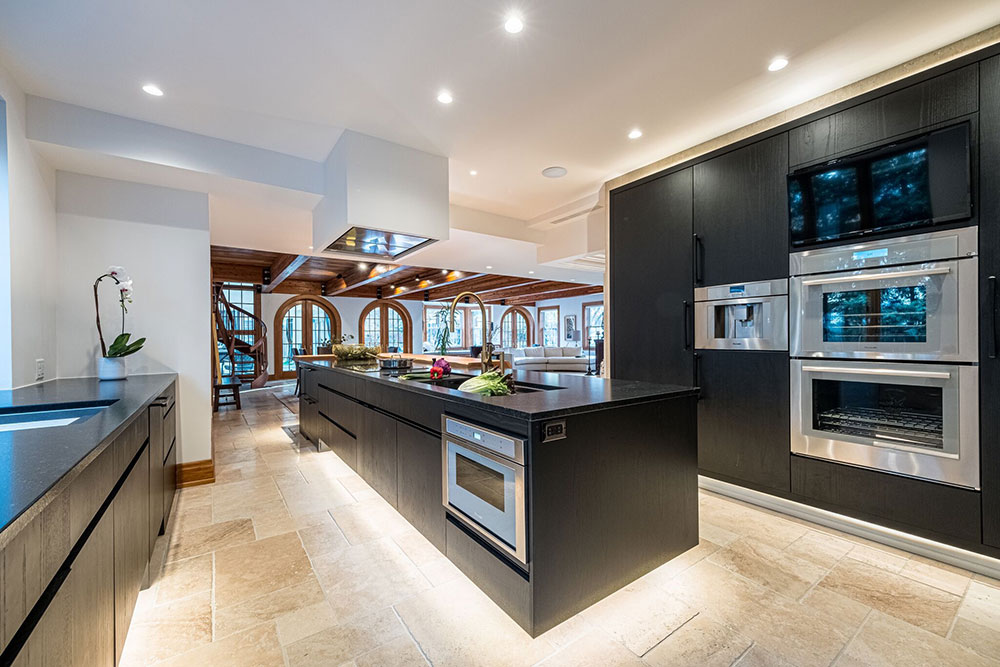 Architect Sarah Drake and designer Melissa Ferrari have been collaborating for nearly 15 years. But the kitchen they created in a Shadyside three-story home was perhaps the first time they used a Japanese restaurant as inspiration. 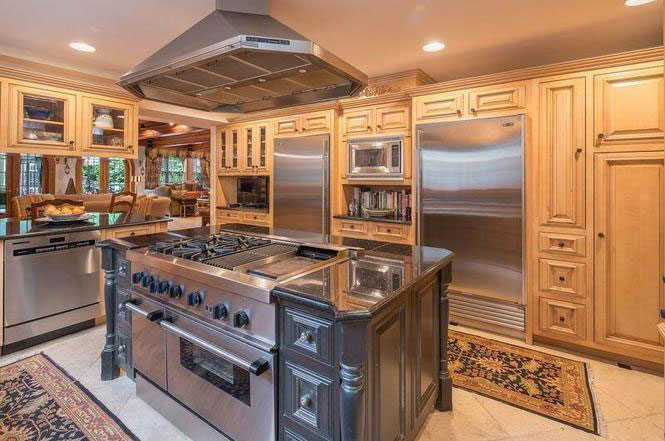 “The client wanted that image — the clean lines, the natural elements, the nice lighting,” Drake says. “It was a very strong idea, and I like when people are honest to their tastes.”

The kitchen was not originally in the scope of the project Drake and Ferrari were hired to do. But as the family saw adjoining rooms transform during construction (including a white-on-white bathroom that won the 2020 Best of Design contest’s Best Renovated Bathroom title), it became increasingly clear that the kitchen had to be done. 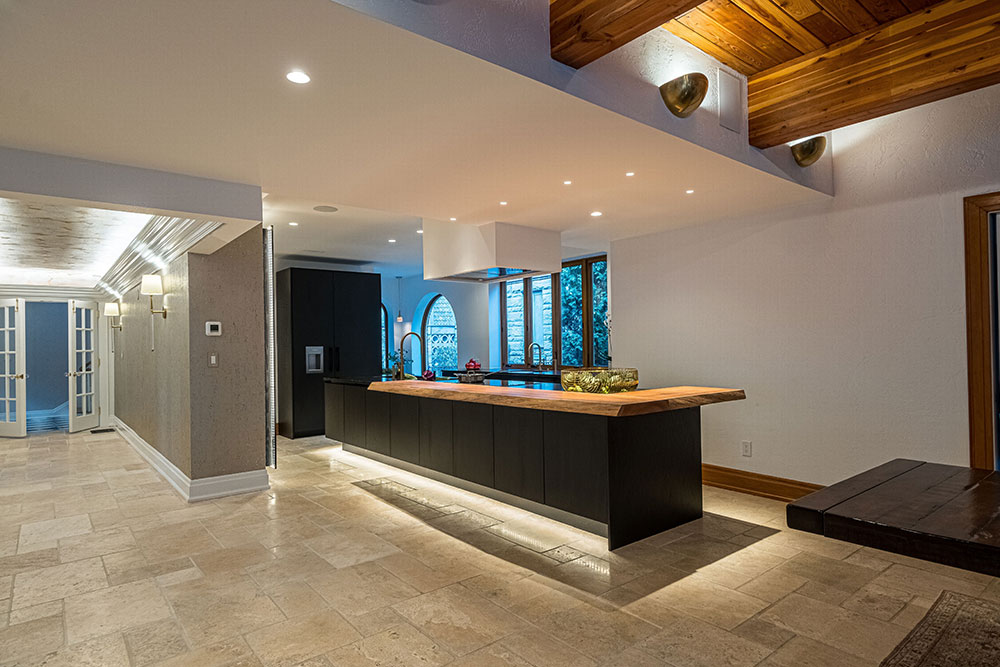 “As projects in old houses tend to do, one thing led to another,” Ferrari says.

Part of the motivation for renovating the kitchen was to unify the family by creating a smoother connection to the secluded living area, which is housed in a decades-old addition to the home. So Drake went to work opening up a narrow doorway that linked the spaces and Ferrari searched for ways to marry the Asian-inspired design with the living area’s rustic, timber ceiling.

The solution came from an unexpected place. The clients have long admired Tadao Arimoto, a Pittsburgh-based sculptor and woodworker whose intricate tables and gates have earned him a dedicated following and a title of master visual artist from the Pittsburgh Center for the Arts.

So they commissioned an L-shaped countertop to cover a swath of the kitchen’s enormous island. Though to call the cherry creation just a countertop would be a disservice to its beauty. 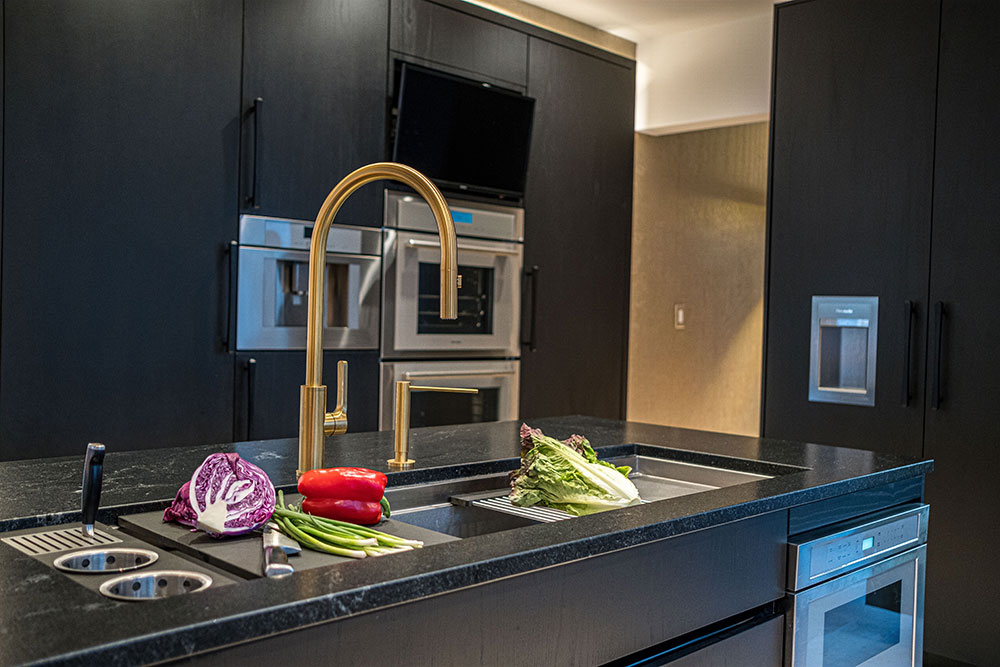 “It really is a piece of art,” Ferrari says. “And it became an engineering project to get it not to fall off the island.”

The endeavor was worth it. The piece not only visually links the living area with the kitchen, it also warms the kitchen’s risky black-on-black design.

An all-black color scheme can appear flat if not done right, so Drake, Ferrari and Ida McConnell of Cuvée Kitchen Designs in Glenshaw ensured depth by mixing materials. The cabinets are smoked oak with visible grain, the countertops are leathered granite and the fixtures are brass. They also used a variety of lighting techniques, including overhead, under-cabinet and natural, to create an ambient glow.

Rounding out the one-of-a-kind kitchen is a bevy of surprising appliances: an integral espresso machine, a rice cooker and a 5-foot sink with a series of sliding cutting boards and colanders.

“The clients wanted a lot out of this kitchen, and they got a lot,” Drake says.

This article appears in the October 2020 issue of Pittsburgh Magazine.
Categories: From the Magazine, HOME + Design, Hot Reads