The First Narrative from Row House Films is the Curious, Memorable “Monuments”

The Lawrenceville film house will distribute the Chicago-made dramedy to arthouses around the country. 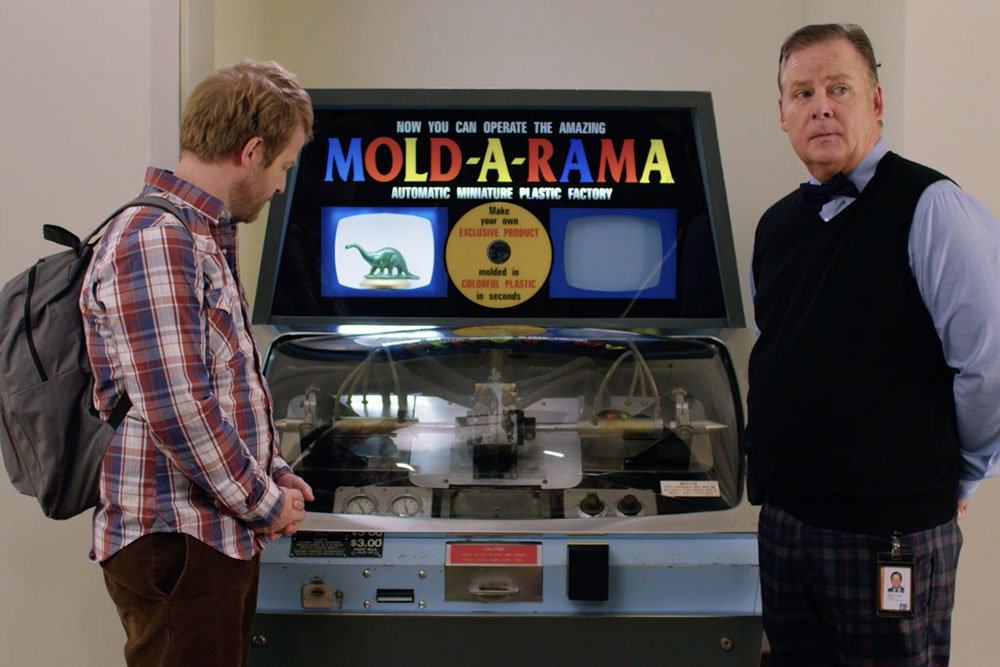 The best moment in “Monuments” is a belly-laugh provoking bit of classic, visual comedy. It wouldn’t have been out of place in a Charlie Chaplin short.

The second-best, however, is the moment that sticks with me. Our protagonist finds himself in the middle of a somber quest that will inevitably prove at least somewhat pointless. He’s sitting in a nowhere bar, a stolen truck waiting outside. Angry folks — and police, probably — are hot on his heels.

Then: A mysterious woman approaches and asks him to dance. Incongruously, the depressed denizens of the tiny roadhouse break into a joyous, choreographed dance routine.

It’s an odd, curious moment. “Monuments” is an odd, curious movie. It’s the kind of film that could only exist as a micro-budget indie — one that rejects the pull to settle on a genre or place itself inside an identifiable box. That’s an approach that often mutes a film’s impact; to be clear, “Monuments” doesn’t quite pack the punch that it might have. But there’s a big benefit in this tactic, too; you end up with a refreshing, memorable film in a sea of forgettable offerings. “Monuments” is far from perfect, but it’s certainly memorable.

“Monuments” is not a local production, having been shot mostly in Chicago. It has become, however, a local product. The movie is the first narrative feature to be distributed by Row House Films. The Lawrenceville cinema, which is awaiting a post-pandemic reopening, made a splash on the independent distribution market with last year’s “Quarantine Cat Film Festival,” a nationally distributed collection of submitted cat videos. “Monuments” is its first drama, and first non-local pickup.

It’s a good fit; small, urban cinemas such as Row House are the natural home for “Monuments.” The film, told partially in non-linear fashion, follows widower Ted (David Sullivan) as he feuds with the family of his late wife, Laura (Marguerite Moreau). Her parents, sister and a lovelorn ex want to deposit Laura’s ashes in a remote Colorado well that serves as the familial resting place; he’s determined to return her remains to Chicago, where they were happiest.

As you may have noticed in the preceding paragraph: That’s bleak subject matter. At its core, “Monuments” is about the impossibility of grief and the futility of ritual gestures in the face of death — it’s a grief movie, a what-we-leave-behind movie, an emotional movie.

It’s also a movie that climaxes with a bouncy-ball aided pratfall. That happens a little while after the trio of unexplained sirens induce a puppet fantasy at an abandoned drive-in theater.

It can be like hearing a song repeatedly change tempo unexpectedly; you can’t quite get a grip on it. There is also a vast talent range among the cast; while the leads and several key supporting players are seasoned, if unheralded, pros, there are others who are out of their depth and can’t quite manage to sell the film’s tonal shifts.

On the strength of an earnest heart and a few indelible scenes, though, “Monuments” hangs together and then some. It’s more curiosity than classic, but it might just linger in your mind.

A local premiere of “Monuments” is set for Friday, June 4, at the Tull Family Theater in Sewickley.