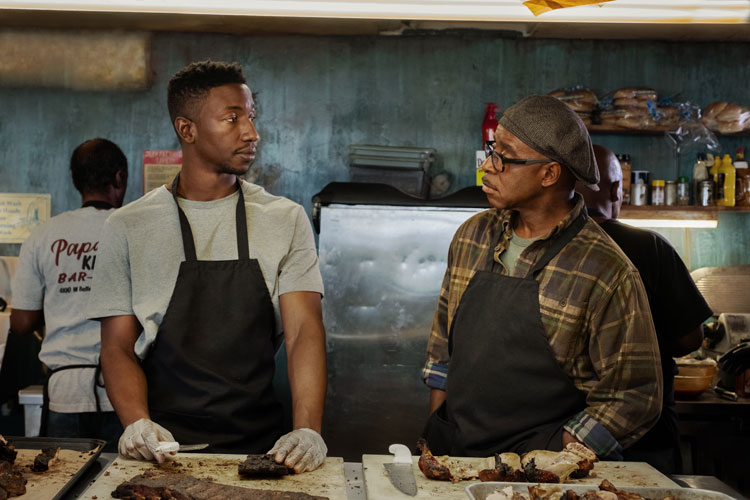 There’s nothing novel about the central conflict in “Uncorked.” Father wants son to take over the family business; son has other aspirations. It’s a story so common that it almost rises to the realm of archetype.

In telling such a tale, then, the quality is dependent on how well the story is presented. In the case of “Uncorked,” it’s handsomely if humbly rendered, with some strong performances and an enjoyable, quiet determination.

“Uncorked” is the debut feature from writer/director Prentice Penny, a veteran (as a producer) of TV series such as “Brooklyn Nine-Nine,” “Insecure” and “Scrubs.” (He also hosted a short-lived truTV series, “Upscale with Prentice Penny,” in 2017.) The specifics of the story: Louis (Courtney B. Vance) has turned a neighborhood barbeque restaurant into a Memphis institution. His father built the business by hand; he’d like to expand to a second location (a concession to a gentrifying neighborhood) and hand the reins to his son, Elijah (Mamoudou Athie).

Elijah, however, is passionate about wine and has been quietly apprenticing at a local shop. He’d like to pursue the notoriously difficult course of study required to become a master sommelier — he’s passed the entrance exam, itself a feat — but Louis sees it as a passing fancy, not dissimilar to previous hobbies. Louis’ wife, Sylvia (Niecy Nash) encourages him to support his son’s passions; Louis can’t help but feel the toplofty pursuit of fine wine is a rejection of the family story.

Even the least presumptuous viewer knows, more or less, where this story is going; Elijah navigates some hurdles in his pursuit while the impasse between father and son intensifies. Some of the plot beats feel rote, adding little. “Uncorked” easily could’ve been trimmed by 10 or 15 minutes, with nothing excised but the fat; while Penny has some early-going shortcomings as a writer, he shows great promise as a director. There’s a restraint at work here not typically evident in a filmmaker’s early work — and a few key turns add the poignancy that is the film’s great strength.

Or, rather, one of its great strengths. The other reason to recommend “Uncorked” is the fine work by Vance and Nash. Separately, they embody lived-in, world-weary but vibrant characters; together, they achieve a rare and affirming chemistry. They’re funny, likable and relatable. Even as the plot of “Uncorked” loses a bit of drive, its performers remain compelling.

“Uncorked” is now streaming on Netflix.