The 400-Word Review: The Two Popes 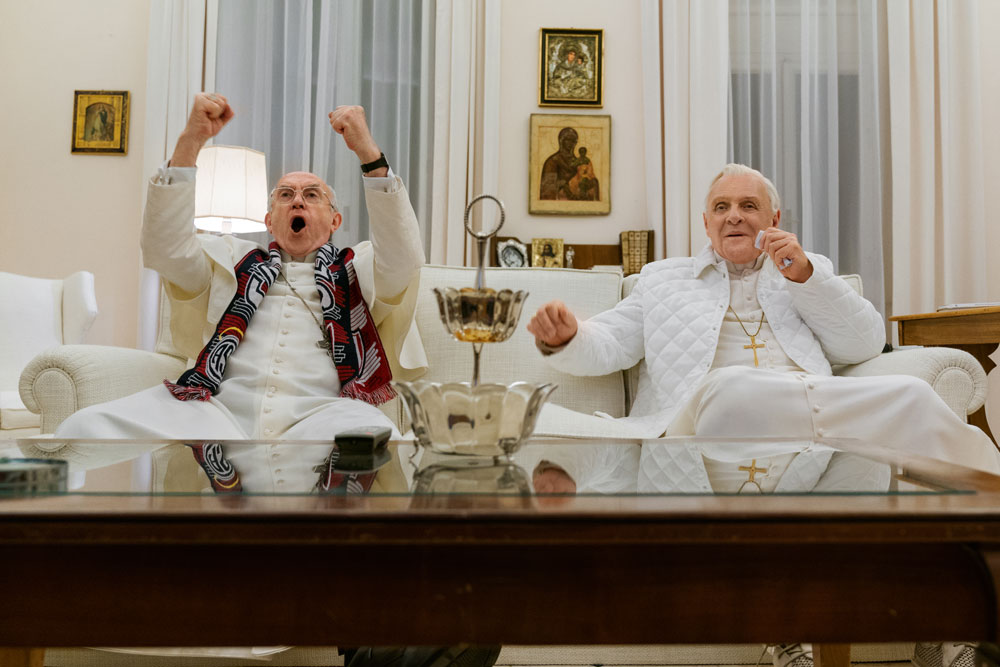 The most engaging sequence in “The Two Popes,” oddly enough, takes place during its end credits.

It’s no spoiler to say how the tale ends up. Pope Benedict XVI (Anthony Hopkins), now retired, has ceded the Catholic Church’s highest office to Pope Francis (Jonathan Pryce). As the credits roll, the pair of popes watch their respective home countries — Argentina for Francis, Germany for Benedict — face off in the World Cup final. It has humor, heart and humanity, and it displays the deep bond forged between the two ideologically divergent leaders.

The final sequence works because it recalls the liveliest moments in the film, those occasions where the leaders serve as an ecclesiastical odd couple. (In their first meeting, Benedict — then Cardinal Ratzinger — asks his younger colleague for the name of the hymn he is whistling. It’s ABBA’s “Dancing Queen.”) When it’s a two-hander showcasing masterful performances and remarkable settings, “The Two Popes” is at its best.

Regrettably, however, the film busies itself with other matters as well. An extended, curious opening sequence depicts Benedict’s ascension to the papacy, presented as though the Holy See were the Lombardi Trophy. Over-extended flashbacks concern the younger life of Francis, including a digression on Argentine politics and unrest.

It is in those sequences that “The Two Popes” loses its footing. There are interesting glimmers, as when the future pontiff (played in these scenes by Juan Minujín) has a chance encounter with an ailing priest that leads to a life of service. When we get to Argentina’s “Dirty War” — during which the military-controlled government is alleged to have tortured two Jesuit priests — the script gets soupy. Even then, we often visit our subjects discussing the events; these moments are fine. When we show those events, it’s redundant. (An odd virtue of “The Two Popes” lies therein: it’s the exception that proves the show-don’t-tell rule. Show don’t tell, unless you have Anthony Hopkins and Jonathan Pryce. In that case, just let them tell.)

Director Fernando Meirelles (“City of God,” “The Constant Gardener”) picks up the slack left in Anthony McCarten’s unrestrained script. Contrasting the wonders of Vatican City and the Italian countryside with a small conversation isn’t rocket science, but Meirelles nevertheless treats each scene with care. The end result is inconsistent but handsome. “The Two Popes” is dwarfed by Netflix’s other late-2019 tentpoles but still probably worth a look.