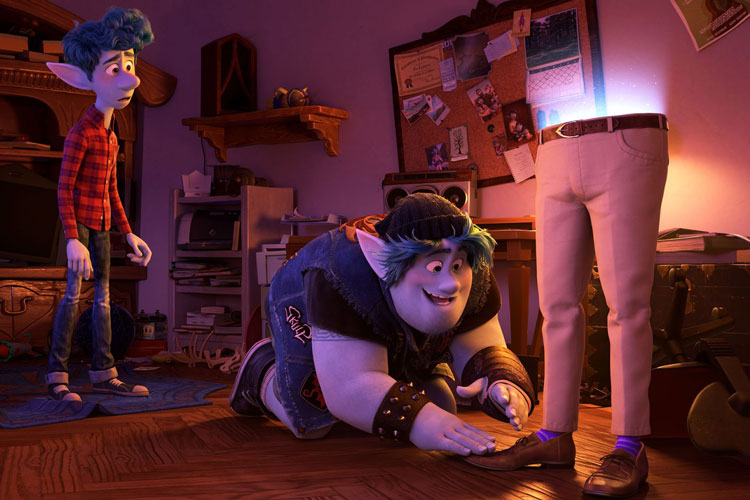 After 25 years, you’d think Pixar would be running out of ways to assault our emotions.

And yet: Year after year, it manages to lure unsuspecting audiences with the promise of cute characters and rich worlds and delivers a heartstring-flaying uppercut.

I should clarify that I think this is a good thing — it’s masterful work. It’s just stunning. Every time?

In “Onward,” the traditional creatures of European fantasy — your assorted centaurs, wizards, pixies and such — inhabit a world a lot like our own. They were once skilled in magic and old-world ways, but have traded in spells and staves for technology and convenience.

Ian (Tom Holland) and Barley (Chris Pratt) are having trouble with late adolescence; confident but aimless Barley is taking a gap year (mostly spent with tabletop role-playing games), while high-school sophomore Ian is struggling to talk to his peers. Despite endless patience and support from their mother, Laurel, (Julia Louis-Dreyfuss), Ian wishes he could’ve met his father, who died while Laurel was pregnant with Ian.

Laurel presents Ian with an unexpected 16th-birthday present: A package from dearly departed dad. It’s a wizard’s staff, which allegedly could revive their papa for 24 hours; this thrills the magic-obsessed Barley, but it’s Ian who has the wizardly touch. They’ll have to survive an old-school quest, however, to make the magic happen.

The voice cast — also including Octavia Spencer as an energetic manticore, Lean Waithe (a cyclops) and Ali Wong (a faun) as police officers and a hilarious Tracy Ullman as a lizard pawnshop owner — is stellar, particularly the endlessly emotive Holland. When things get heartbreaking (and boy, do they), this is a cast that leans into the material without a saccharine note. “Onward” is often poignant and never treacly.

The film stumbles a bit in its world-building; there’s an endless parade of “Futurama” style background gags, but they pass so quickly that you won’t catch them until you pause your Disney Plus account. Director Dan Scanlon, who handled the studio’s “Monsters University” in 2013, keeps things a bit breezy; it’s the rare Disney picture that felt rushed rather than drawn out.

Great gags, excellently realized characters and a beautiful world easily outweigh those flaws, however. Steel yourself for an emotional ride and strap in. Oh, and try to be resilient — you won’t have time to recover. Another Pixar movie arrives in June.