There's some great comedy and serious drama in this remake, but it can't stick the landing. 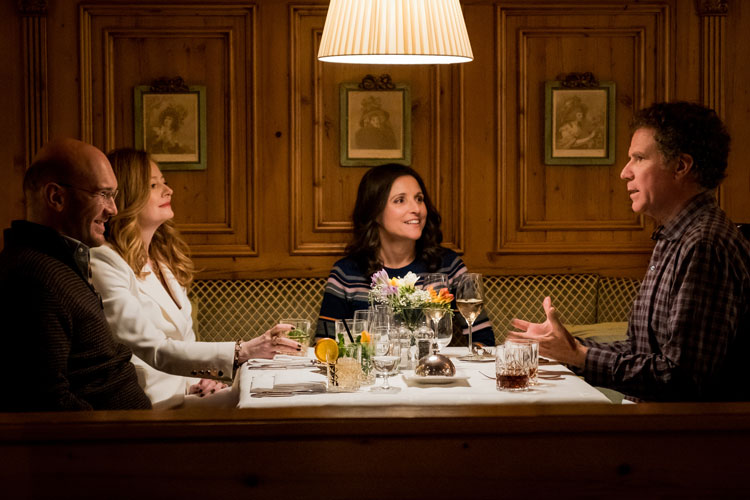 It’s nice to see a movie built out of a moment. In “Downhill,” everything hinges on one action — not even a full scene but a mere decision — that colors everything that occurs before and after. We’re in an era where movies are often soaked with plot; “Downhill” is a nice counterpoint.

The moment in question occurs early in a family ski vacation. Mid-50s husband and wife Pete (Will Ferrell) and Billie (Julia Louis-Dreyfuss) bring their sons (Julian Grey and Ammon Jacob) to a posh Alpine ski resort for a bit of family rehab; the kids are too focused on screen time, the adults are disconnected. The pivotal moment occurs when a controlled avalanche sends snow cascading toward the family; they’re in no danger, but for a moment, it looks like they’ll be buried.

At that moment, Pete grabs his phone and takes off, leaving his family behind. The hour of the movie that follows sees every member of the clan grapple with this act of abandonment — which retroactively colors the seemingly good-faith effort Pete and Billie were offering in the first reel.

“Downhill” is a remake of the 2014 film “Force Majeure,” a Swedish film nominated for that year’s Foreign-Language Golden Globe. Both films straddle the line between comedy and drama; “Force Majeure” is funny for a European drama, while “Downhill” is dry for an American comedy.

Which is not to say that “Downhill” is not funny; it certainly is. When Billie demands a meeting with safety officials to express the family’s displeasure, it’s a cringe-comedy master class; an encounter between Pete and a flirtatious stranger is hilarious. There are plenty of laugh-out-loud moments here (with these leads, there must be); it is not, however, a farce.

The stakes are serious. While directors and co-writers (with Jesse Armstrong) Nat Faxon and Jim Rash underline some of their metaphors a bit too firmly — you’ll roll your eyes at a bathroom set divided by a mirror — when Billie makes Pete face the music, it’s white-knuckle tense.

Enough so that it’s rather disappointing that “Downhill” bungles its ending. It’s difficult to evaluate the choice having first seen “Force Majeure,” a generally more subtle film; even so, I found the conclusion forced. Perhaps those coming to “Downhill” with fresh eyes will feel differently; I think, however, the ending reduces the film from a quiet success to a middling effort.