Watch cats frolick, squabble and cuddle in this collection of feline films. 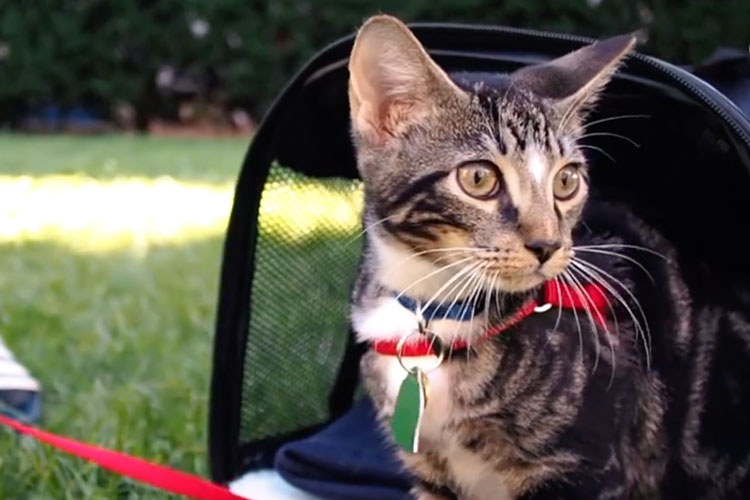 Why do cats, rather than dogs, have an annual silver-screen compilation — shown in theaters, distributed by legitimate movie studio Oscilloscope Laboratories?

I think the answer is on full display in one of the early clips in this year’s feature.

A small dog scampers outside of a doghouse (presumably his own). He barks, flails and jumps at the entrance. When he draws near, a cat gingerly reaches a single paw out and gives him a harmless yet clear bop on the nose, sending the pooch scurrying. The dog is all random action; the cat is thoughtful response.

Cats, you see, have timing.

That’s evident throughout “CatVideoFest 2020,” a 70-minute collection of video clips and very short films culled from a variety of internet sources (as well as some submitted for inclusion). The screenings are the rare program not available via streaming or home video; in-theater showings are the only way to see this collection. (A full map of screening locations is available at catvideofest.com.)

“CatVideoFest” is divided into four sections: “Drama,” “Classic” (for videos shared widely online), “Action/Adventure” (for moments of acute feline mayhem), and, of course, “Comedy.” The program is also given a burst of short-form energy at about the halfway point by the crowd-pleasing “Cat Gif Break.” (Keep an eye out in that segment for the glorious moment when a small creature — possibly a chipmunk or flying squirrel — successfully rides an unexpecting cat, a task I would’ve thought impossible.)

A few of the segments also contain inventive pieces of animation; one cartoon, “Farfalla,” is downright beautiful.

The presentation itself is a somewhat clunky affair; the videos are presented with no context or editing, some even leaving TikTok logos or room for links to other YouTube videos. Complaining about such details, however, is like criticizing the font on a birthday cake. If you’re so insufficiently amused that you’re focused on rough edges, this program isn’t for you.

There’s plenty of humor in “CatVideoFest,” as well as a few heartwarming tales of rescued, happy cats; those are appropriate in that screenings benefit local cat charities in the communities of each participating theater. Animal lovers, of course, will be rapt. Even dog people, however, will find the kittens too lovable to resist.

By the way: If I had known that cats had a longstanding feud with hairdryers, I would’ve already purchased both a hairdryer and a cat.

“CatVideoFest2020” opens today at both Row House Cinema and the Rangos Giant Cinema.