Pete Davidson gives an impressive turn (even if it is right in his wheelhouse) in this thoughtful comedy. 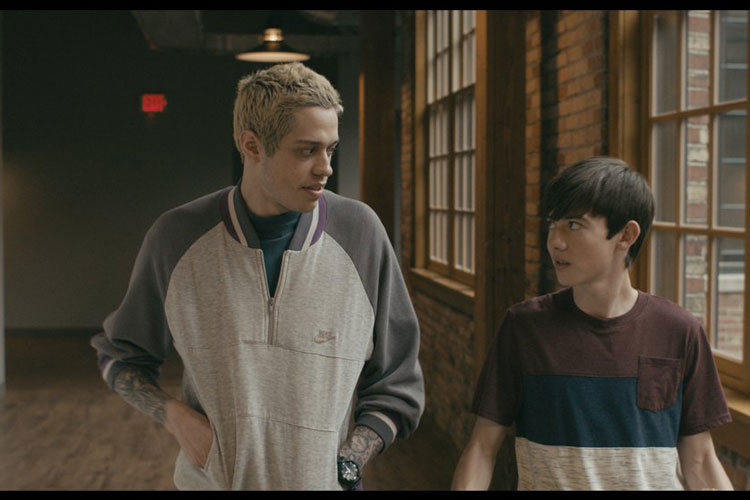 The late teen years are the subject of constant fictional commentary — perhaps more so than any other phase of life. The momentous shift from childhood to (very young) adulthood is resonant, to say the least. Raw, demonstrative emotion is a hallmark of the age — the very type of behavior that disappears during play-it-cool adulthood.

“Big Time Adolescence,” a compelling comedy from freshman writer/director Jason Orley, probably doesn’t break new ground (with coming-of-age tales appearing on a nearly weekly basis, how could it?) but it does offer a fascinating study in contrast. How do the hallmarks of the late-teen years look when worn by a twentysomething who refuses to move on — and what happens when an actual high-schooler falls under the influence of an adult whose maturity has regressed?

Mo (Griffin Gluck) and Zeke (Pete Davidson) are an odd couple in age only. Both are sardonic, slightly awkward party animals; neither knows how to handle romantic entanglements. Both are more than content to squander endless hours in directionless, alcohol-fueled idleness. (At one point, Mo describes Zeke’s house as “the most chill place ever.”)

The difference: Zeke is 23, occasionally holding down an entry-level retail job and living in a house he may or may not have legally inherited from his late grandmother. Mo is a high-school junior; ages ago, his older sister dated Zeke, and the two maintained a somewhat unlikely friendship after the breakup.

Many characters in “Big Time Adolescence” refer to Zeke as Mo’s de facto older brother — including Mo himself and Mo’s frustrated father (Jon Cryer) — but that’s not precisely it. If anything, Mo is slightly more mature than Zeke. Mo is impressed with his deadbeat friend because he’s living an adolescent fantasy: sex, drugs and rock and roll, with no school and barely any adult responsibility.

Unsurprisingly, when Mo starts to see Zeke’s arrested development for what it is — most prominently through the eyes of Sophie (Oona Laurence), the object of Mo’s affections — the spell wears off. (A not-insubstantial brush with the law doesn’t help matters.)

“Big Time Adolescence” is thoughtful, genuine and immensely watchable. Ample humor balances the doses of reality; Davidson has been gifted an ideal role and brings a wealth of skill to it. If it’s possible for a well-established star to still have a breakthrough role, this is his.