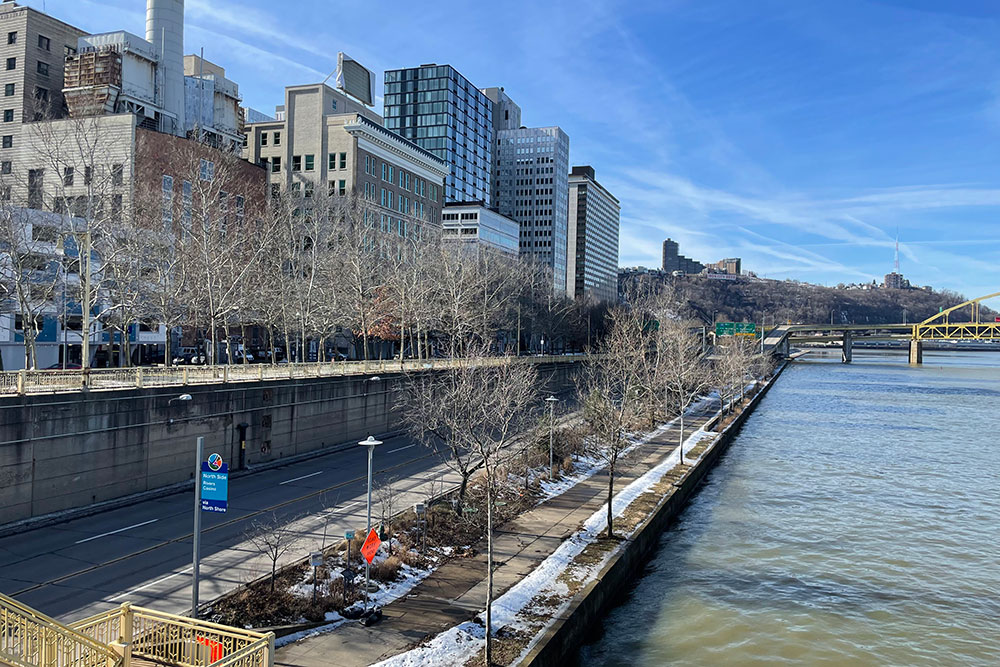 One of Downtown Pittsburgh’s parks is getting a facelift.

Allegheny Riverfront Park was first dedicated in 2001, touted as much-needed cartilage connecting Pittsburgh’s Cultural District across a barrier of roadways and bridges to the Allegheny River. But time took its toll on the space, and its restoration was the topic of a virtual event held yesterday morning, hosted by the nonprofit Riverlife.

“Allegheny Riverfront Park: The Origins and Future of a Cultural Landscape” featured panelists Carol Brown, former president and CEO of The Pittsburgh Cultural Trust, along with Michael Van Valkenburgh, founder and creative director of Michael Van Valkenburgh Associates, Inc. — the landscape architecture firm hired by the Trust to design Allegheny Riverfront Park in the 1990s. The session was moderated by Riverlife President and CEO Matthew Galluzzo. 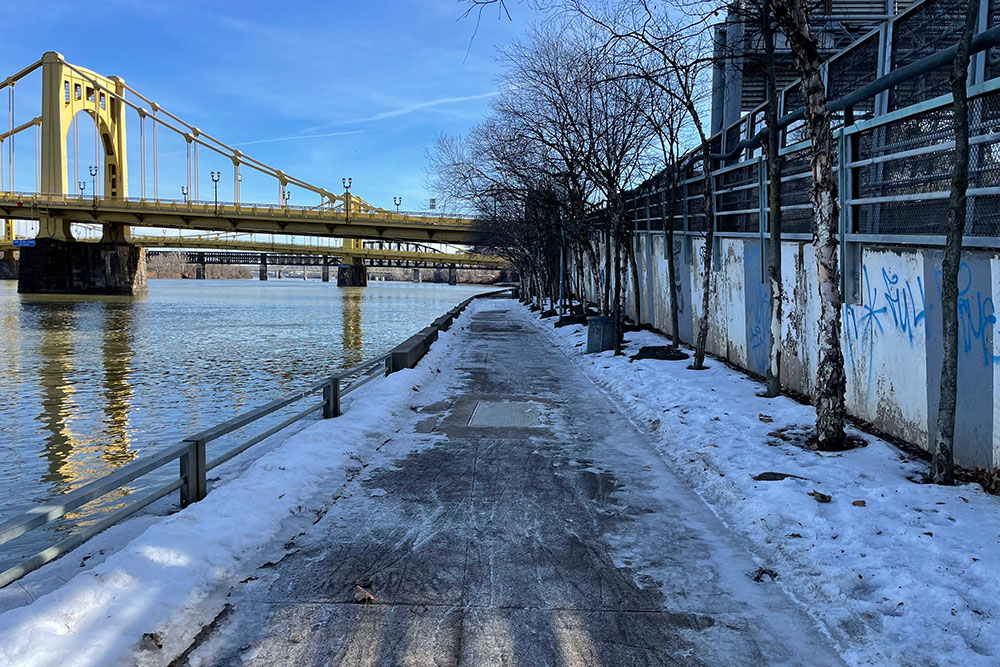 Restoration efforts, expected to be completed by 2023, will include replacing damaged pavement like its bluestone walkways, which have deteriorated over time. Plans also include pruning the trees and installing new benches and lighting, organizers said at the event.

The park’s placement makes it one of the most highly visible Downtown green spaces, too, but deferred maintenance over two decades has led to significant deterioration of the park’s Pennsylvania bluestone pavers. Galluzzo compared it to the difference between buying a dog and caring longterm for a pet.

“It’s real easy to buy a dog,” he said. “What are they going to charge you, 50 bucks? Or pay you to take it? Two years later — whoa, you spent a lot of money on that dog. And I choose an analogy that’s playful, but that dog depends on you.” 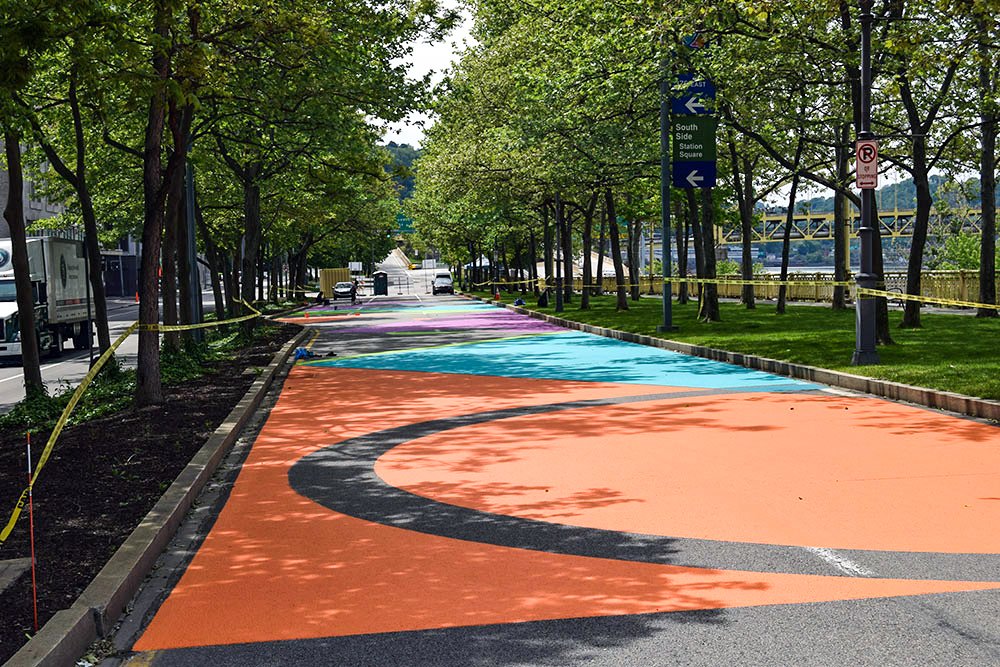 “Allegheny Riverfront Park, like many well-designed and well-loved parks, nestles into its surrounding environment in a way that makes it feel like it’s been there forever,” Galluzzo said. “There’s a downside to that familiarity, though. It can lead to us taking for granted the care and restoration that’s necessary to sustain the park for future generations.”

More than 20 years since the dedication of the upper level officially marked Allegheny Riverfront Park as open to the public, it has become “a key part” of Riverlife’s Completing the Loop project, which focuses on the revitalization of the 15-mile, 1,050-acre Downtown riverfront between the West End, 31st Street and Hot Metal bridges.

The project also included the renovation of Allegheny Landing, a space between the Andy Warhol and Roberto Clemente bridges that Riverlife said had been “loved to death.” 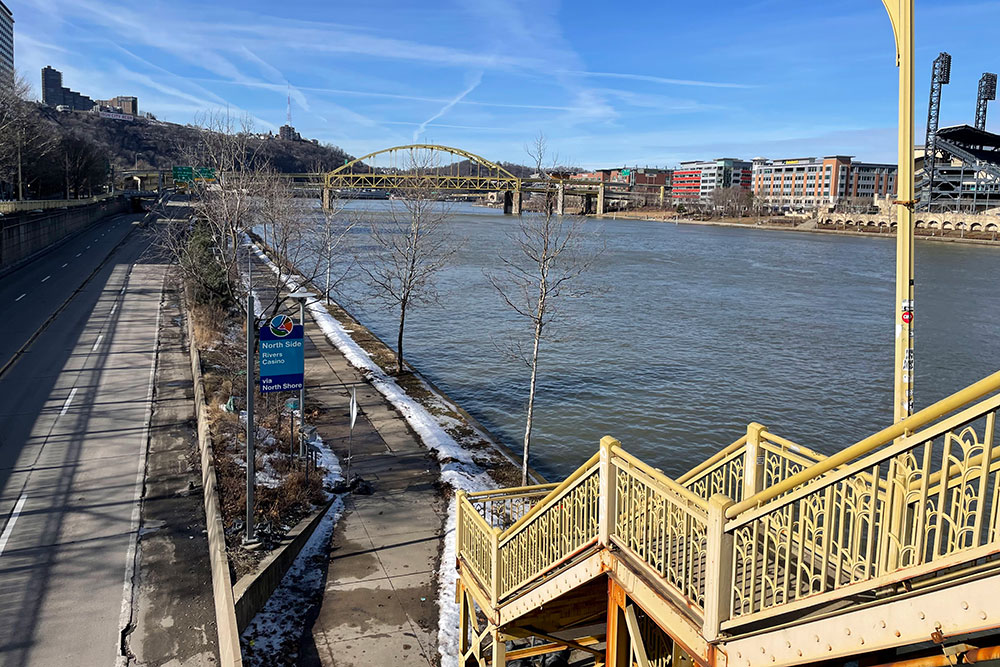 Similarly, Allegheny Riverfront Park’s constant use has left it worn out, and its upcoming renovations will aim to restore it to its former glory — and take it to a new level as contemporary issues like the ongoing coronavirus pandemic produce greater demand for outdoor spaces.

“Allegheny Riverfront Park was not only a gift of the river to the people of Pittsburgh, but a handsome example for all cities in the challenge of reclaiming more riverbanks in the urban core,” Brown said. “In an era where more people are turning to outdoor areas for recreation and relief, the restoration of the park is as urgent as ever.”

Planning for the city-owned park began in 1994 on land that Riverlife says was defined by multilevel highways and a desolate parking lot between the three sister bridges on Sixth, Seventh and Ninth streets. Brown, Van Valkenburgh and artists Ann Hamilton and Michael Mercil worked collaboratively on a design that would incorporate art into a new landscape of riverfront trees and boilers along the underutilized riparian edge.

“It was a piece of land no one would think twice about,” said Van Valkenburgh. “From the beginning, the site’s limitations — which a lot of people would have been throttled by — were taken by us as strange gifts to be reckoned with.”

He added that the creation of the park was “one of the early examples of the city park renaissance that began to accelerate in the 1990s.”