The restaurant, run by Dinette’s Sonja J. Finn, boosts the dining experience at the Carnegie museums in Oakland. 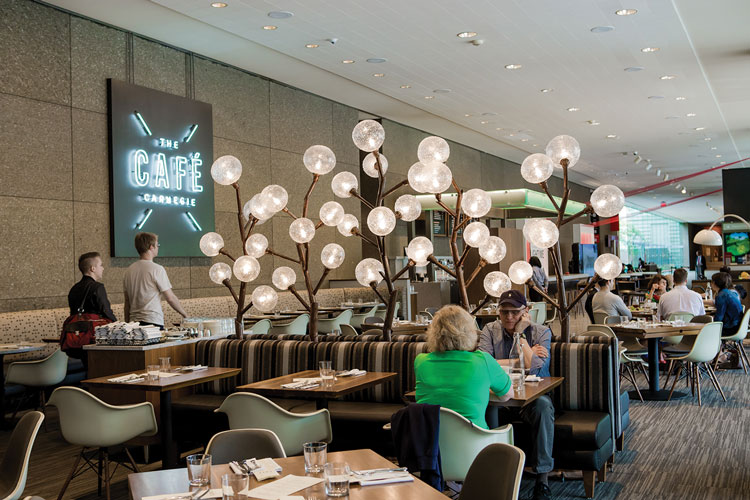 The modernist dining room of The Café Carnegie in Oakland is arrayed with sturdy, square and circular wood tables and Eames chairs on easel legs. It’s divided by a small forest of lamps with branches capped by globes of soft-light bulbs. The bright and breezy space is perfect for conversations serious or silly.

Eating a hearty salad chèvre chaud lifted my spirits on a grim afternoon. Al dente lentils flavored with hints of vinegar and sherry made up the body of the salad, which also included carrots, soft mixed lettuces and endive. The salad was topped with warm, creamy Goat Rodeo “Chickabiddy” chèvre capping a slice of toasted, housemade baguette.

A year ago, visitors looking to refuel while viewing legendary artwork and groundbreaking discoveries at the Carnegie Museums of Art and Natural History wouldn’t have been so lucky. They were limited to assembly-line food, reheated and served on a plastic lunch tray as bland as the setting. Nobody in Pittsburgh was making a deliberate trip to the museums to eat those institutional dregs.

That changed when The Café Carnegie, the linchpin of a catering contract with Texas-based foodservice firm Culinaire, opened in December. Culinare made a smart choice in hiring one of Pittsburgh’s most esteemed chefs, Dinette owner Sonja J. Finn, as the restaurant’s executive chef. Becca Hegarty, a talented chef/baker who was a 2017 James Beard Foundation “Rising Star Chef” award semifinalist, served as chef de cuisine until early May and was instrumental in executing the restaurant’s opening menu. 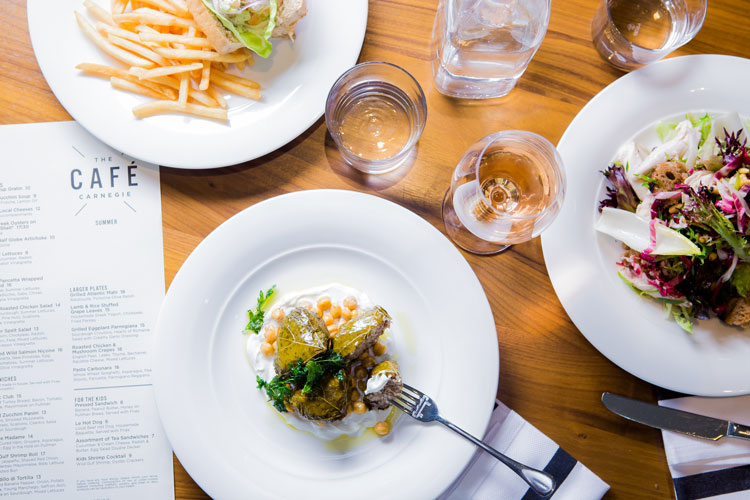 The Café Carnegie primarily is a lunch/brunch restaurant, though it does offer a limited dinner service on Thursday when the museums stay open late. It’s a reliable spot for a casual business meeting, afternoon date or a feel-good lunch.

Hospitality is breezy and friendly. Aside from one meal during which the mains came out before we’d finished our soup and salads, servers do a strong job of reading tables. They know when diners need to power through before their lunch hour is over (doable if you’re in the neighborhood) or if they’re planning to linger for a longer lunch. 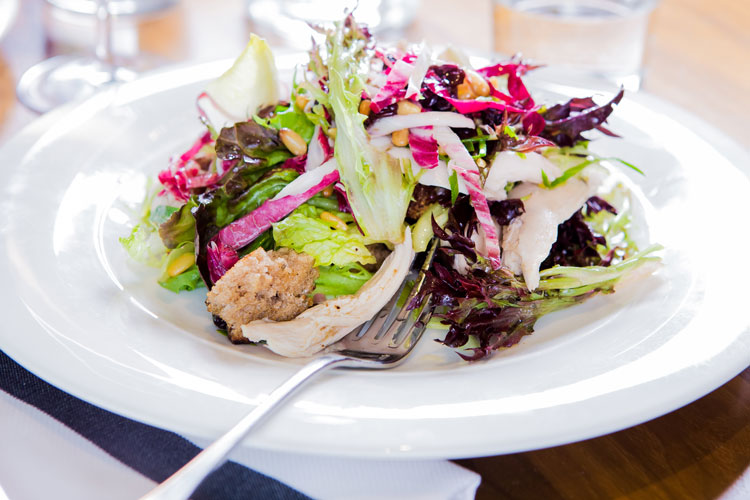 Pulled chicken salad, a nod to Finn’s early career stint as a chef at Zuni Cafe in San Francisco, hits all of the right notes with its mix of roasted chicken, soft lettuces, pine nuts (which should be toasted to better evenness) and currants.

The cafe’s winter-menu sandwiches didn’t hold a candle to the salads. In one of them, shaved ribbons of roasted Jamison Farm lamb were overshadowed by bracingly bitter escarole and lumpy chickpea puree, begging to its maker for a bit of acidity to cut through the richness.

Grilled egg sandwich, served on some of the best sourdough I’ve had in Pittsburgh, started out promising with a runny egg but washed out with an overabundance of hard-to-eat raab, its bitterness once again throwing off the balance of the dish. I was grateful for the vivid side salad enhanced with nuanced touches of tarragon and chive. Indeed, the star of all of the sandwiches was the bread program developed by Hegarty — I hope the café can keep up the quality now that she has departed to run a small farm and work at Dinette. 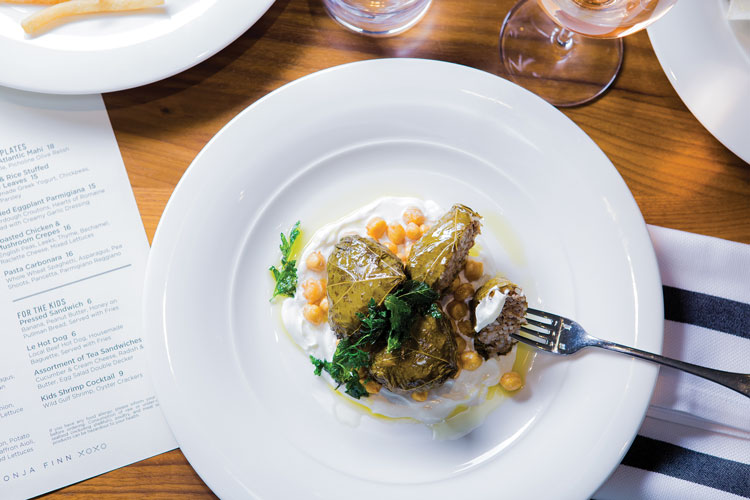 There are a handful of larger-plate options on the summer menu, most of which are quite good. Grilled eggplant parmesan is a solid place to start. Eggplant rounds have some char and bitterness on the skin but a velvety flesh, with sauce, basil and cheese just as they should be. I wish the accompanying croutons had more oil, garlic and Parmesan.

Lamb-and-rice stuffed grape leaves is another good choice from the current menu. Firm yet airy pyramids of ground lamb and rice (which could use a pinch of salt, a running theme among the large plates) are wrapped in flavorful grape leaves. If the fried chickpeas underneath had a bit more crunch, this dish would be a hit.

Thus far, Finn has managed to strike a balance between pleasing museum guests simply looking for a quick, quality fuel-up and diners on the hunt for a classy, feel-good lunch. If she continues to push forward as the restaurant matures — and her strong track record at Dinette indicates that she will — The Café Carnegie will become a draw, much like the building that houses it. 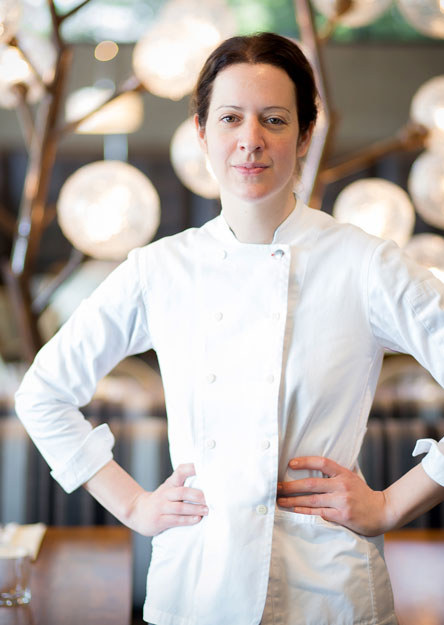 What are the benefits of starting a new restaurant with a food service company instead of on your own?
It’s very different to be a restaurant owner and chef rather than simply the chef. At Dinette, I’m as much small business owner as I am a chef. My day-to-day is about keeping the business running. So I’m putting together the menus and the recipes, guiding the cooks and working the line, but I’m also paying the bills and switching light bulbs. Here, I have the ability to focus on the kitchen. The agreement with Culinare was that this was going to be my food, and the ingredients were going to be sourced that way I wanted them to be sourced. This was an opportunity to be part of a museum that I love and focus on the food.

What’s the difference between creating a menu for a museum space as opposed to a standalone restaurant such as Dinette?
The major difference is that this is a set menu. So I need to figure out what can be sourced throughout the season. [Menu planning at] Dinette is really simple. It’s “what’s there today that’s good?” and that’s what goes on the menu. Here we have to make sure we can ensure quality for the entire season of that menu. Menu-writing isn’t hard; ensuring quality is. I don’t have a set menu at Dinette. So, when farmers ask, “What do you want me to grow for you?” I don’t know what I want to run for an entire season. Here, because there is a set menu, we can work like that. But, generally [at Dinette], I like farmers to tell me, “I have this” because that means it’s growing well this year. I’d rather work like that than try to force something.

One of the things that I like best about eating here is that I can eat something, feel satisfied and also more energetic.
Food is supposed to nourish you. That gets lost a lot. I’m putting together items where the flavors will all go well together, but it also will be a complete meal. I cook the way I eat. I expect the plate in front of me is going to nourish me and give me energy. Food should give you energy. You shouldn’t have to feel like you need to take a nap after a meal. That doesn’t make sense. You’re getting energy from this food because it’s all real food. It’s minimally processed. When your body is eating real food, you’re going to feel better for eating it.

This article appears in the July 2017 issue of Pittsburgh Magazine.
Categories: From the Magazine, Hot Reads, Restaurant Reviews