Point Breeze micro-roastery expands its reach while considering the birds. 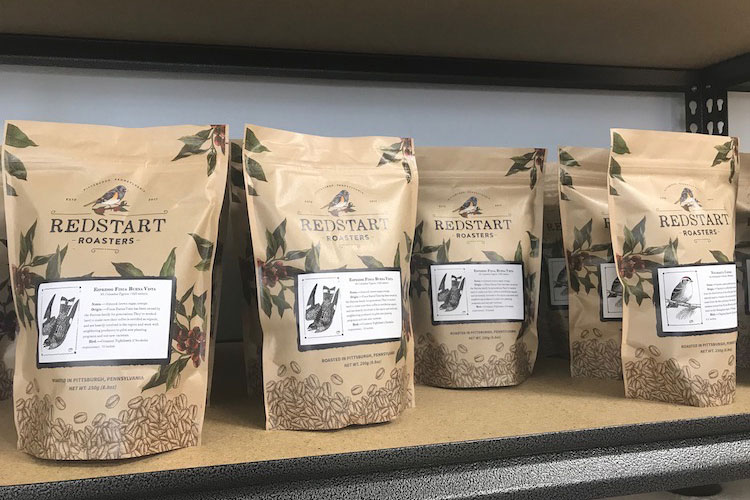 Matt Parmelee, owner of the Point Breeze micro-roastery Redstart Roasters, is stepping out in Pittsburgh’s coffee scene. He founded the company in 2017 after his hobby roasting quickly took over his back shed and most of his free time. At first, he only sold to restaurants but now Redstart sells coffee in small shops throughout the city and farmer’s markets, keeping his bright red, 15 kilo roaster working full-tilt.

Parmelee came by his love of coffee in 2009 through a part-time job as a barista at Starbucks while he was studying at the University of Pittsburgh. “I’d never had coffee before that,” he says.

He quickly became infatuated with the beverage, taking full advantage of the trainings and educational programs Starbucks offered to its employees. In 2010, he went to work for his second cousin, Ken Zeff, founder and former owner of successful local coffee chain, Crazy Mocha Coffee Co., while he finished his computer engineering degree.

After a few years in his field of software engineering full-time, he missed coffee and began tinkering with home roasting. “I have two full-time jobs now,” says Parmelee, who’s employed his knowledge of software in helping to run his roaster. He’s also tied in his passion for birds; Restart is named for an American warbler.

Fifty percent of Parmelee’s beans come from farms certified as bird-friendly by the Smithsonian’s Migratory Bird Center. To be granted this certification, farms must meet a strict list of qualifications such as amount of shade cover retained on the farms and types of fertilizers and pesticides used. According to the Migratory Bird Center’s website, “three-quarters of the world’s coffee farms destroy forest habitat to grow coffee in the sun.”

Parmelee is currently sourcing coffee from Columbia, El Salvador, Honduras, Guatemala and Ethiopia, as well as a tea made from coffee cherries from Nicaragua. He believes shade-grown coffees are not only better for the environment and bird habitats but also more interesting and nuanced in flavor.

“With it being shade-grown, [coffee farmers] have a wider window in which to decide when to harvest, which allows more nuanced flavors, but also [coffee] co-mingles with native plants. With coffee, the same exact plant will taste different depending on where you grow it,” says Parmelee.

Redstart Roasters’ coffee can be found at the 52nd Street Market in Lawrenceville, HLane in Swissvale and My Goodness in Regent Square, as well as on rotation at Artisan Cafe and Adda in the coming weeks. Redstart Roasters will participate in Pittsburgh Coffee Week with an event on Oct. 20 at which Parmelee will discuss bird-friendly coffee and ethical sourcing at the roastery.