The challenge will officially launch in early February, with up to five prizes totaling $15,000 being awarded. 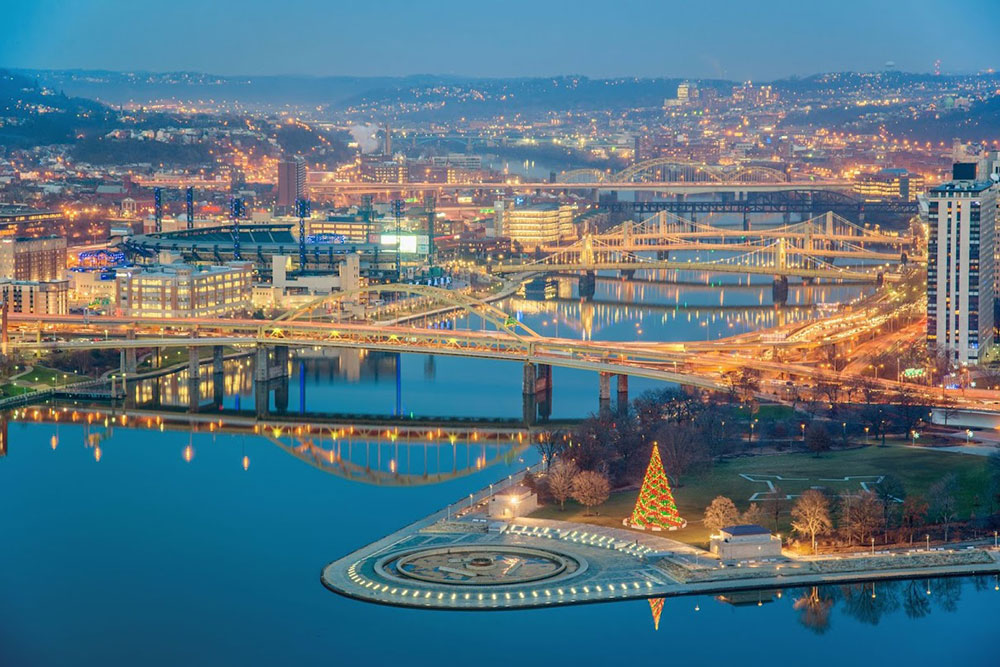 It has been a Christmas staple for more than 30 years: At Point State Park, Duquesne Light Company’s Tree of Lights has helped usher in the holiday season since 1988. As one of the numerous trees on display as part of the city’s Light Up Night each year, the 80-foot-tree erected near the fountain has been touted as a symbol of hope and cheer for locals and tourists alike.

But as this year’s winter festivities wrap up and planning begins for next year, the decades-old tradition will soon be retired. In its place, DLC is planning something new — and you can help plan what, exactly, it’s going to be.

The electric utility provider announced Thursday morning that it will be working with HeroX, the leading platform and open marketplace for crowdsourced solutions, to launch a competition called “Reimagining the Duquesne Light Company Tree of Lights.”

The challenge seeks to design a new holiday light display to replace the company’s long-celebrated light display starting in 2022.

“DLC is committed to helping the city of Pittsburgh celebrate the holidays through a new and more modern light display, while honoring the richness of our city’s beloved traditions,” said Christine Waller, DLC’s vice president of communications, in a press release. “With the public’s help, we hope to replace the current display with something that will uphold the tradition our region has come to love over the years.”

The challenge will officially launch on Feb. 3, at which point folks will be able to visit HeroX’s website to submit their design concepts.

DLC is offering up to five prizes totaling $15,000, according to the press release. DLC also said it intends to award a contract for the construction and implementation of the winning design for the 2022 holiday season and, if applicable, a contract for yearly installation, too.

“While we understand the beacon the tree has become to the region, we see this as a great opportunity to build a new tradition with the support of the public,” Cindy Adams Dunn, secretary of the Pennsylvania Department of Conservation and Natural Resources, which operates Point State Park, said in the release. “We are excited to see new designs to help celebrate the holidays and remind people of the importance of the holidays in Pittsburgh, the same way the tree did for more than 30 years.”

The company tried to retire the tree after the 2020 season, as park officials expressed concern that the annual tree violated the historical significance of the park. Then-Mayor Bill Peduto wrote a letter to Dunn urging her to help save the tree.

But a petition circulated online by Pete Linko garnered more than 10,000 signatures to “save” the tree.

“Let beauty we all have experienced be there for generations to come!” the petition read.

Peduto wrote a letter to Dunn urging her to help keep the tree there, too.

“The tree is possibly one of the city’s most viewed with its dynamic location at the forks of the Ohio visible from north, south, and west. Whether you are exiting the Fort Pitt Tunnel or visiting the City’s North Shore and West End parks, the ‘Tree of Lights’ has grown to be a defining symbol of the holidays in our city,” he wrote in the letter, according to a Pittsburgh Magazine article from last year. “I hope we can work together with Duquesne Light to ensure this tradition continues for future generations.”

Sure enough, the tree lived to see one more year.

It’s too soon to tell if the tree’s 2022 retirement will spark a similar outrage, or if the competition component will assuage the sense of collective loss the Pittsburgh community expressed last year for the tree DLC called “beloved” in a statement to Channel 11. But in an email, Linko said the competition is another chance for the people to have their voices heard, just like they were last year when more than 10,000 people fought to save the tree.

“We are confident that the people will make the best decision to design and make a new holiday tradition that is similar in scope and shape and pay homage to the original tree,” he said.

For more info on the competition, keep an eye on HeroX’s website.