There is New Hope for Pittsburgh’s Tree of Lights

This is supposed to be the last year for the iconic tree at Point State Park, but plenty is going on behind the scenes to ensure its return. 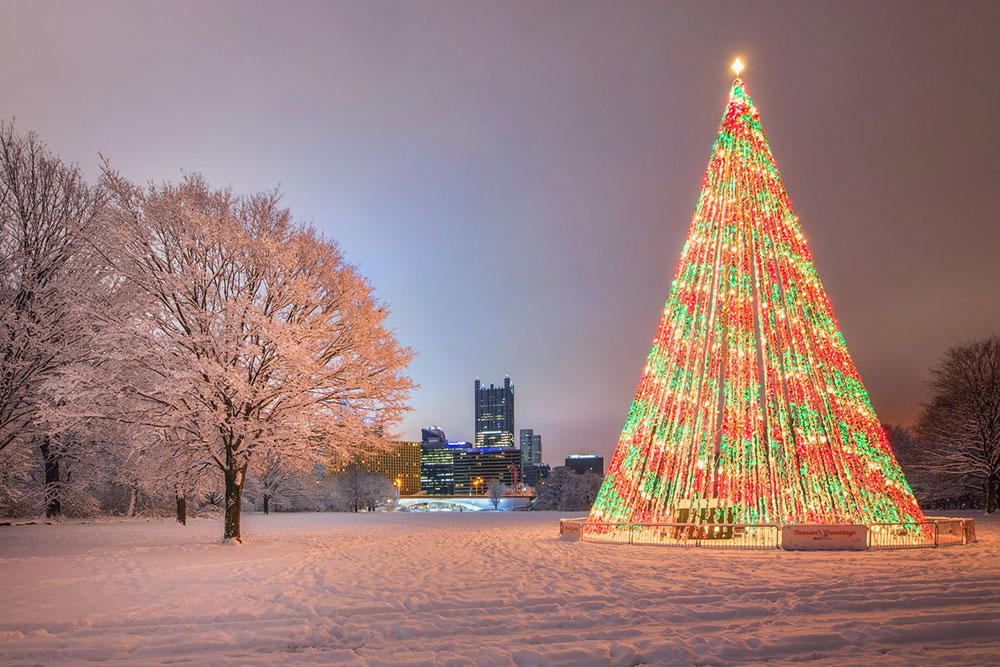 Visitors to Point State Park next holiday season may be able to gaze upon a lighted tree near the confluence of the three rivers after all.

Duquesne Light first announced the impending retirement of the 80-foot-tall Tree of Lights in a press release on Nov. 20, stating that it was a “mutual decision” between the park and company to retire the tree.

“It was never our intent to retire it this year, had it not been for the park’s decision on location,” said Hollie Geitner, director of communications at Duquesne Light Co., which has sponsored the tree since 1988.

According to Geitner, the company is now working with the park to make sure the tree can return next year.

“Since Point State Park expressed concern over the historical preservation of the grounds, we’ve been actively working with them to consider our options for next year’s holiday season” she said. “We will announce those plans as soon as they’re available.”

Pittsburgh Mayor Bill Peduto is also working to make sure the tree returns. He sent a letter to Cindy Adams Dunn, secretary of the Pennsylvania Department of Conservation and Natural Resources (DCNR) at the end of November asking to help save the tree. Point State Park is one of DCNR’s 121 parks throughout the state, with the department overseeing all those parks and their managers. The City of Pittsburgh has no jurisdiction over Point State Park.

“The tree is possibly one of the city’s most viewed with its dynamic location at the forks of the Ohio visible from north, south, and west. Whether you are exiting the Fort Pitt Tunnel or visiting the City’s North Shore and West End parks, the ‘Tree of Lights’ has grown to be a defining symbol of the holidays in our city,” he wrote in the letter. “I hope we can work together with Duquesne Light to ensure this tradition continues for future generations.”

Molly Onufer, assistant communications director for the Office of the Mayor, says Peduto and Dunn had a follow-up call about preserving the tradition.

According to Terrence Brady, DCNR press secretary, his department did not issue an order for the tree to end after this year. Or, really, ever.

“The location and annual construction/deconstruction of the tree have been a resource and infrastructure concern since we turned the new fountain on,” he said. “Duquesne Light Co. certainly acknowledged/understood and needed to manage for those concerns. Moving the tree to [the] city side lawn has been the park’s standing preference because of those concerns, along with event guidelines/space use, post capital project. However, we did not tell them that this needs to be the last year nor did we issue an ultimatum that if they did not move to city side that they would need to cease.”

In fact, he says, it was Duquesne Light’s idea to retire the tree. Even keeping the tree in its current location was OK by DCNR.

Park Manager Weiland did not respond to requests for comment at the time of publication.

Regardless, Brady says DCNR is “re-engaging” with Duquesne Light for the status of the 2021 tree and beyond.

“Replacement of the former tree — which was in deteriorating condition — for future seasons is the goal of all parties concerned. In working with the city, DCNR is open to future options as well as a tree. We would be open to the idea of a ‘green’ opportunity with environmentally and culturally appropriate elements. The Secretary has talked with the mayor and the department is in communications with Duquesne Light. The current tree is rather old and we collectively are determining if it can be fixed. If it cannot, we will work with [Duquesne Light] and the city to design a new tree fitting for such a grand place in Pittsburgh.”