Living Pittsburgh’s own “This is Us” story, Steeler Cam Heyward has unfinished business in football — and his charity work. 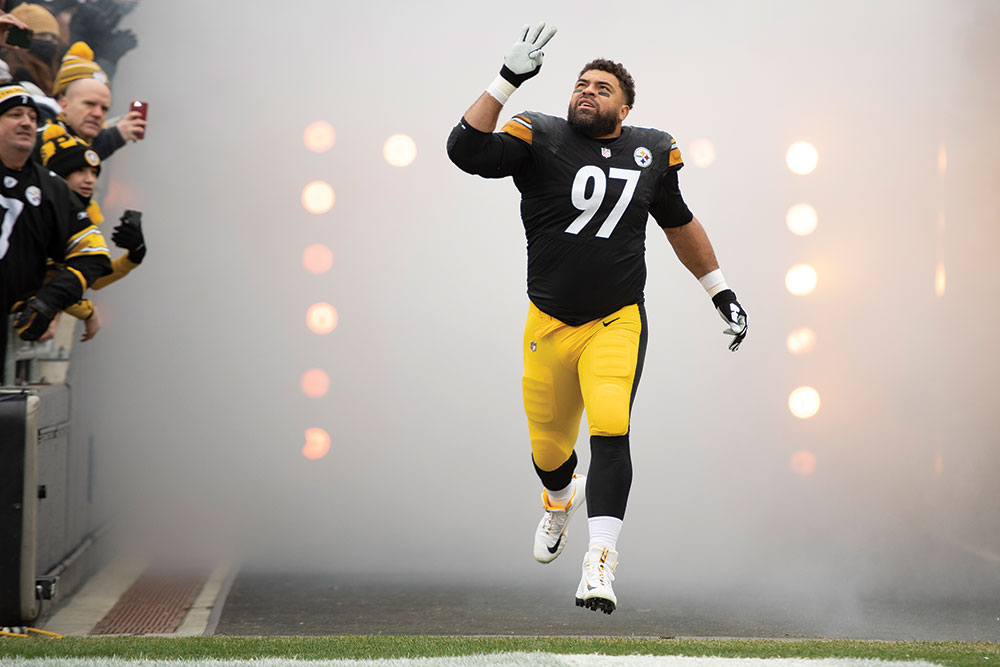 The six seasons that NBC’s “This Is Us” spent chronicling the Pearsons, Pittsburgh and the Steelers may have come to an end, but for Cam Heyward, the emotion the show generated continues to resonate.

I swear my life is like @NBCThisisUs story. I can’t make this stuff up. pic.twitter.com/sukvsiB6jE

“I swear my life is like @NBCThisisUs story,” Heyward tweeted in early May, as the show neared its series finale. “I can’t make this stuff up.”

He included a picture of himself with brothers Corey and Connor. Connor had been drafted days earlier by the Steelers.

Their parents didn’t refer to the Heyward brothers as the Big Three, as fictional siblings Kevin, Kate and Randall Pearson had been called in the show. But the Heywards, like the Pearsons, lost their father while growing up.

Cam was 17, Corey 12 and Connor 7 on May 27, 2006, when Craig “Ironhead” Heyward died at age 39 from inoperable brain cancer. “Ironhead” was an All-American running back at the University of Pittsburgh, a first-round pick of the New Orleans Saints in 1988 and an 11-year NFL veteran.

“I just think in my life and my family, we’ve been pretty blessed,” Cam says as he enters the second year of a four-year, $65.6 million contract extension with the Steelers. The defensive tackle has been on the team since 2011. 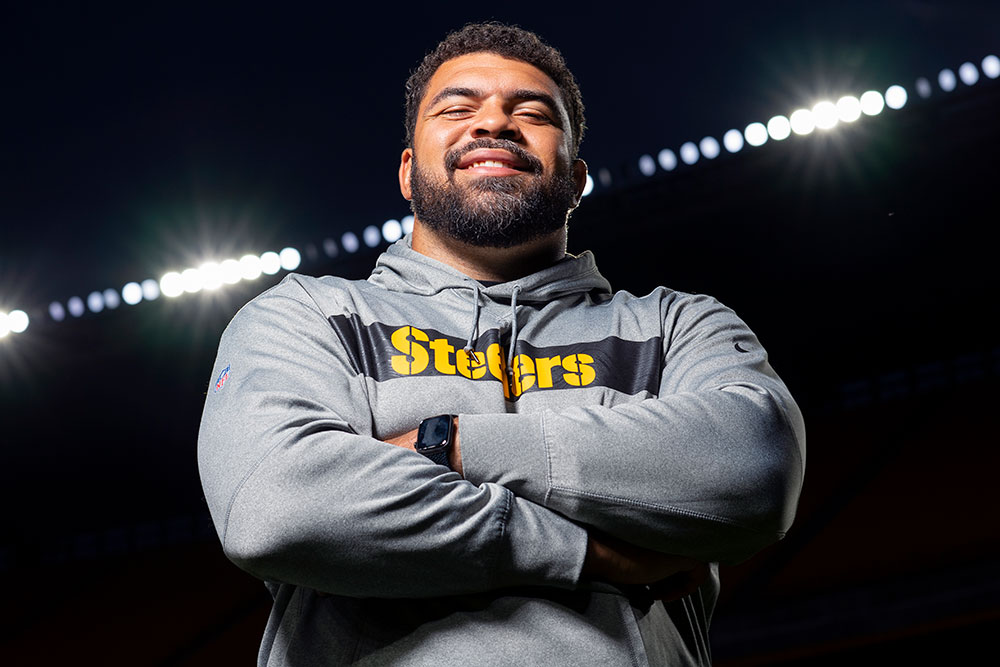 “Things had a way of working out.

“Me getting drafted here where my dad played, where I had aspirations of just being part of the NFL and then to wind up back in Pittsburgh where my family is was huge. And then, almost 11 years later, watching my little brother get drafted to the same team is something you can’t really plan for.”

Heyward’s siblings include a half-brother, Craig Jr., and an adopted sister, Meagan.

The Pearsons “have an immediate family that wasn’t all biological, and I think we’re the same in that regard,” says Cam’s mother, Charlotte Heyward-Wesley, who lives in Atlanta. “I think we’re a loving family that loves everybody, the diversity.“

No one has crafted a TV series around the remarkable story of the Heywards. Perhaps somebody should. 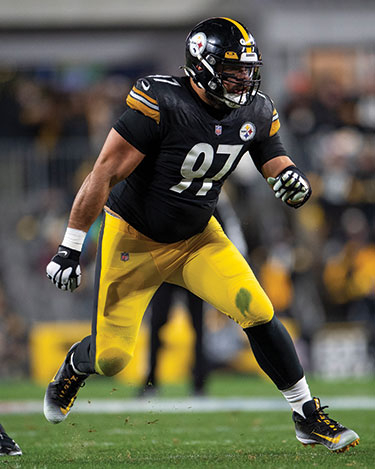 Cam Heyward, 33, was born at West Penn Hospital and attended the Falk Laboratory School in Oakland.

As a child, he had such severe asthma that he didn’t know whether he would be able to play sports. He had seizures at a young age and bad allergies. He spent time at Children’s Hospital of Pittsburgh when it was located in Oakland.

“I wouldn’t be around today without them,” he has said about his doctors.

When his family moved away from Pittsburgh to follow his father’s NFL career, they never lost their allegiance to the Steel City.

“He might have had a Heyward jersey, but he was wearing Steelers stuff to school,” Charlotte says, recalling the family’s time in Atlanta while “Ironhead” played for the Falcons (1994-96).

“My parents sent Steelers stuff to the kids every holiday. Every Christmas they got something Steelers. They had Troy Polamalu posters up in their room. They had Steelers stuff since Day One.”

“I bleed black and gold,” Charlotte says. “I always had a Steelers sweatshirt and my Terrible Towels. I was going to Steelers games when I was 10 at Three Rivers Stadium. My parents were going to training camp. Our whole family, we are die-hard Steelers fans.”

Charlotte, a native of Highland Park, remained loyal to the Black and Gold on Oct. 27, 1996, when the Falcons and her husband hosted her hometown team in Atlanta, with the Steelers winning 20-17. “I was cheering for the Steelers, I’m just going to be honest,” she says.

Despite his bouts with asthma, Cam seemed destined for the NFL.

“He was 6-foot-5 by the time he was in eighth grade,” Charlotte says. “In his pre-teens [his pediatrician] did some testing to make sure he didn’t have any hormonal imbalance.”

He lines up at defensive tackle for the Steelers these days at 6 feet, 5 inches tall and 295 pounds.

Cam’s triumphant return to his hometown might have occurred years prior to the Steelers selecting him with the 31st overall selection of the 2011 NFL draft. When he was being recruited out of Peachtree Ridge High School in Suwanee, Georgia, Pitt showed serious interest.

“That was my first visit and my first scholarship offer,” Cam says.

He ultimately signed with the Ohio State Buckeyes, where he stayed all four years.

He says his return to the city where his father became a college star was worth the wait.

“He passed away when I was 17, but I get to hear all the stories about him and how he had an impact on this city,” Cam says. “So it’s like dad is still around.” 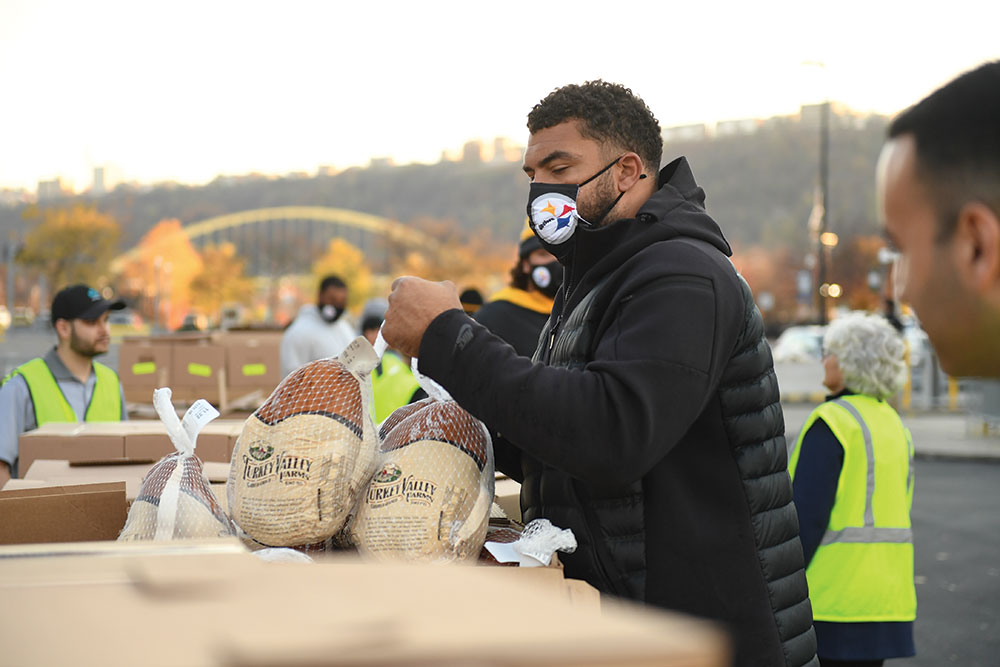 HEYWARD DISTRIBUTES HOLIDAY MEALS DOWNTOWN IN AN EVENT THAT HE SPONSORED WITH THE GREATER PITTSBURGH COMMUNITY FOOD BANK IN NOVEMBER 2021. PHOTO BY CAITLYN EPES | PITTSBURGH STEELERS

Cam is as charitable as he is combative.

The former has garnered Cam four nominations from the Steelers for the Walter Payton NFL Man of the Year Award, an honor that rivals the Most Valuable Player award in terms of prestige and recognizes volunteer and charity work along with on-the-field excellence.

Cam has come by both qualities naturally.

“When my kids were growing up there was always someone living in our house, a close family member, a friend, somebody who just needed a place to stay,” Charlotte says. “They grew up with that. And I was really intent on making them be involved in giving back as they were growing up.”

The family also gave back during the holidays. “For Thanksgiving or Christmas, I would have them create little bags of toiletries, and then we’d put cookies in there. Their teachers would also collect coats or blankets for me. And then on Thanksgiving Day or Christmas Day we’d find homeless people on the street who hadn’t made it into the missions or the shelters and the kids and I would hand them out.

“They were a little scared at first. I was like, ‘Cameron, you’re big, get out of the truck, these people need you.’ And then he’d step out and do it and then his brothers would follow.” 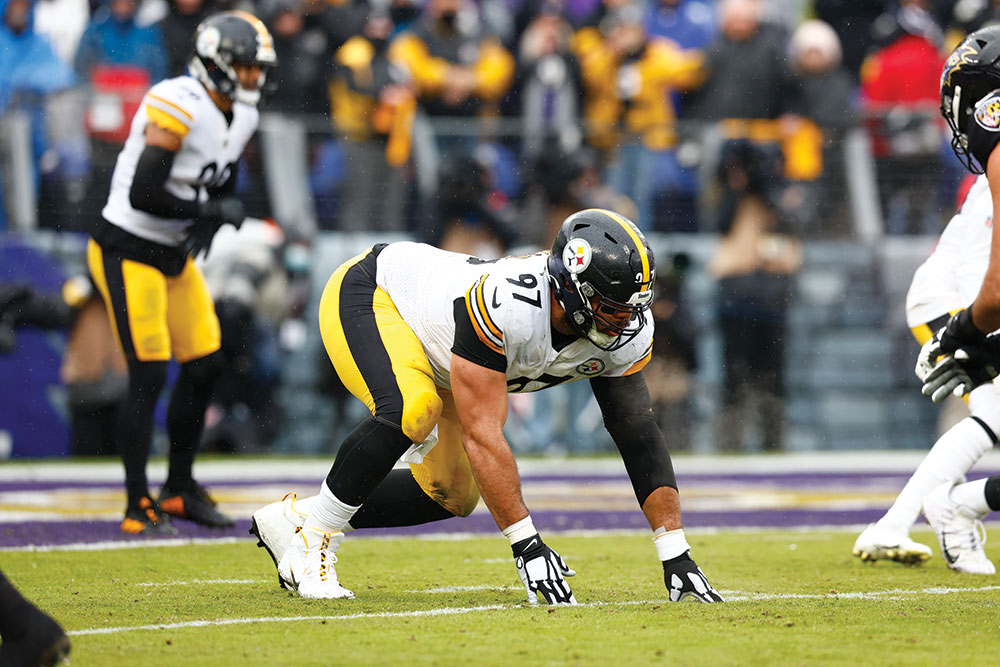 A similar commitment to community awaited Cam upon his arrival with the Steelers. “I got to watch Troy [Polamalu], Brett [Keisel] and Aaron [Smith] give back in different ways,” Cam says. “I didn’t know how I was going to give back but I wanted to make sure I left an impact.”

The Cameron Heyward Foundation, or Heyward House, has been doing just that since 2015.

The nonprofit champions a number of causes in Pittsburgh and Atlanta: improving literacy; emphasizing the love of reading, learning and education; improving the quality of life for brain tumor patients and their families by providing post-secondary education opportunities; spreading acts of kindness by paying for a stranger’s groceries or a tank of gas; ensuring children’s birthdays are recognized and celebrated; providing dress clothes for high school boys for job or college interviews; and providing donations to the Boys & Girls Clubs of Western Pennsylvania for every Steelers sack.

It’s what Steelers players do, in part because it’s what they’ve been taught to do by veterans who greet them upon joining the team.

“We take guys under our wing, that’s kinda the Pittsburgh way,” says Keisel, the still-popular retired Steeler defensive end. Keisel says he learned the importance of community service from Alan Faneca, Jerome Bettis, Hines Ward, Kimo von Oelhoffen and Smith after being drafted by the Steelers in 2002.

“You teach them how to practice and how to prepare and how to work in the community. I’m proud to see Cam just be such a pinnacle in our community and a powerhouse on the field.

“Even 11 years in the league, you never see him getting pushed around. You always see him getting double-, triple-teamed. He still finds a way to be a game-wrecker. He’s just a beast,” Keisel says.

It took a while for Cam to achieve beast mode.

He didn’t start a game in either of his first two seasons with the Steelers. His rookie training camp in 2011 with the Steelers is memorable mostly for the number of fights he engaged in with offensive teammates.

“That’s kinda my fault,” Keisel acknowledges. “Within the first couple of days in pads, one of the offensive linemen kind of shoved him when he was running to the ball. He came to the sideline and I just whispered in his ear, ‘You let them shove you around and they’re gonna shove you the rest of your NFL life.’ The next play he went out and got in a fight. He’s been fighting ever since.”

“We are a very competitive family. Basketball games at our house can get kind of nasty between all of us.”

That’s life for what Charlotte described as her “gentle giant,” now married to his college sweetheart, Allie Schwarzwalder, and a father of three.

“When you meet Cam you can feel his genuineness,” she says. “I can say he’s a better man, father, son, brother, friend than he is an athlete, and he’s an All-Pro athlete … That makes me more happy as a mom.” 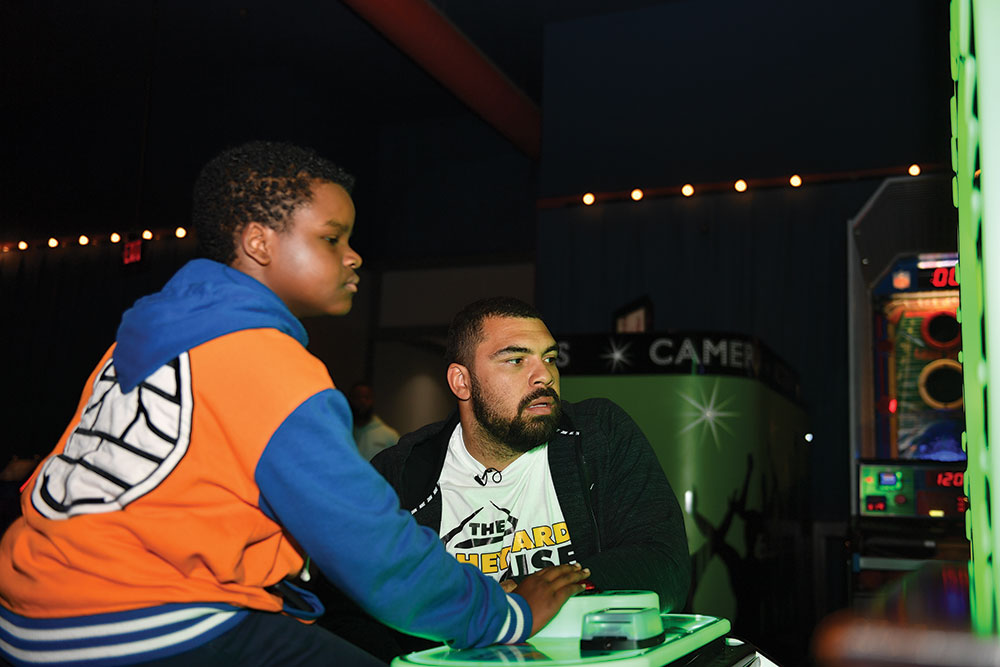 HEYWARD AT A BIRTHDAY CELEBRATION AT DAVE & BUSTER’S WITH CHILDREN SERVED BY THE HEYWARD HOUSE. PHOTOS BY REBECCA MEHLING | PITTSBURGH STEELERS

Recognition earned by Cam in 2021, his 11th Steelers season, included The Chief Award, which is presented annually by the Pittsburgh Chapter of the Pro Football Writers of America to the Steelers player who best assists the writers in their duties; it was the third such honor for Cam.

In May, he was named the 18th recipient of the PFWA’s Good Guy Award (a national version of The Chief Award).

Also in May, Cam was commencement keynote speaker at Carlow University, where he received an honorary doctorate of science degree, acknowledging his philanthropy and dedication to mankind.

“They act like I’m Mr. Rogers around here, the way they treat me,” Cam says.

“There’s not a box he doesn’t check,” Tomlin said. “He’s just a blueprint for young players.”

But he’s not a finished product.

Off the field, Cam has ambitions of wanting to take The Heyward House beyond Pittsburgh and Atlanta to help youth across the nation. Both Charlotte, the foundation’s executive director, and Allie are very active in the charity. 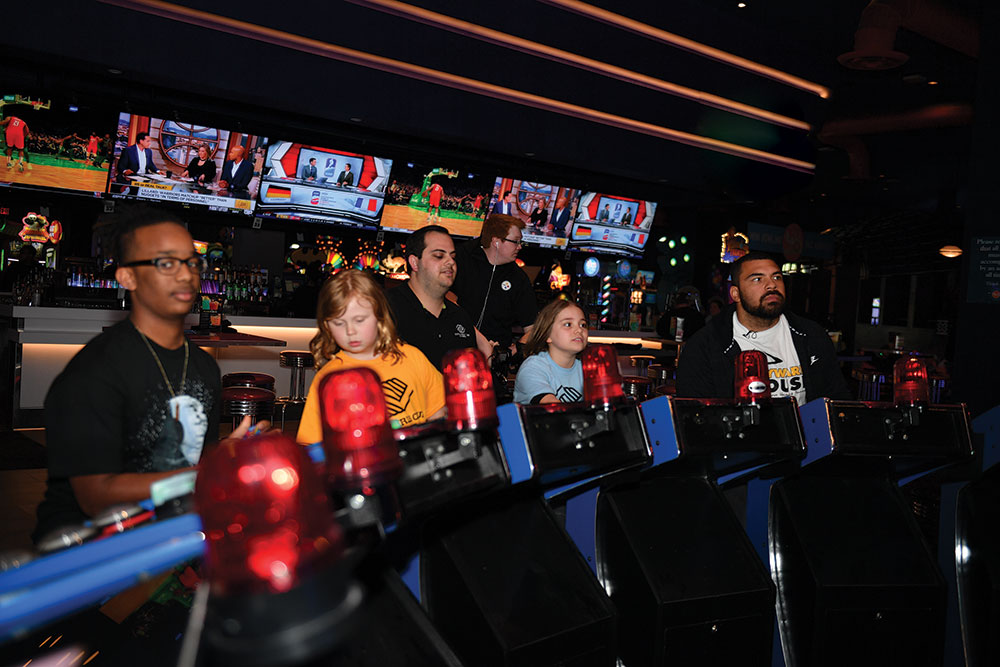 “He wants a chance to win a Super Bowl,” Charlotte says. “He wants it with every ounce of energy, everything that’s within him. He wants that, he’s striving for that for the organization, for the Rooney family and for the City of Pittsburgh, but for his own personal goals, as well.”

It would be the ultimate happy ending for the Heyward family’s “This Is Us” real-life sequel.

“‘These Heywards,’ or whatever we would call it, would end with me and my brother kissing the Super Bowl trophy,” Cam says. “And with my mom shedding a tear knowing my dad gets a chance to watch us win the big one.” 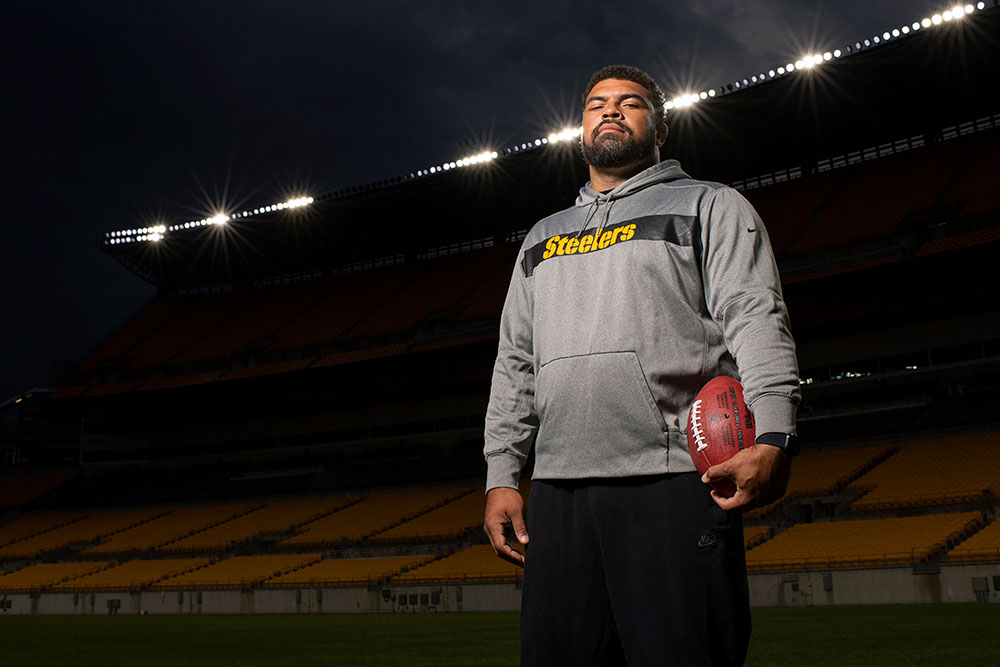 Mike Prisuta is a veteran of Pittsburgh sports reporting since 1985. He writes a weekly column, Mike Prisuta’s Sports Section, for Pittsburgh Magazine. He can be heard Monday through Friday talking sports with Randy Baumann and the DVE Morning Show. His favorite sport is whatever’s in season.

This article appears in the August 2022 issue of Pittsburgh Magazine.
Categories: From the Magazine, Hot Reads, Steelers