This nonprofit provides cribs to low-income families — and it’s thanks to an unlikely, and very Pittsburgh, meeting. 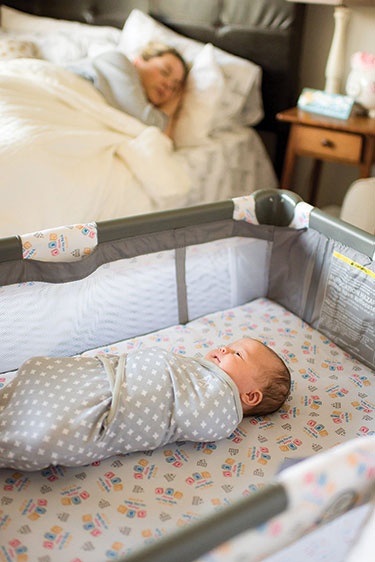 The founding of Cribs for Kids is a uniquely Pittsburgh story: a former Steelers player, a future mayor, Cyril Wecht, the locally based shipping company Pitt Ohio Express and many others banding together to boost a nonprofit.

Cribs for Kids is a Pittsburgh-based organization dedicated to teaching parents how to safely put their children to sleep — and providing cribs and safe-sleep kits to low-income families that otherwise would not be able to afford them. In both its education and the products it distributes, Cribs for Kids relies on a simple slogan: “A.B.C.,” for “Alone, on my Back, in a Crib.”

That slogan — which was coined by a 1994 campaign from the National Institute of Child Health — is emblazoned on the fabric of the Cribette, Cribs for Kids’ in-house crib model that provides a safe sleep space for babies up to 30 pounds. Each Cribette is purchased by Cribs for Kids partners for distribution to low-income families.

Four years later, another telethon gained the attention of Ray Mansfield, a former Pittsburgh Steelers center — and, vitally, a board member of SIDS Pennsylvania. After meeting Bannon, he told her that 10,000 babies a year were dying of sudden infant death syndrome (SIDS), a phenomenon in which a baby will be found dead with no determined cause of the death.

Bannon was shocked to hear the number, she says. “I thought, ‘How could 10,000 babies be dying, and no one is doing anything about it?’” She joined the team as a fundraiser — despite the organization only having $2,000 in the bank.

Her new job led to a 1992 conference in Sydney, Australia. There, she learned about a three-year study where babies were placed on their backs instead of their stomachs to sleep, leading to a significant drop in SIDS rates.

After a few years of educating parents, Bannon noticed that a majority of grieving families coming into support meetings were low-income. The trend concerned her; in response, she coordinated a study of SIDS death scene investigations with then-Allegheny County coroner Cyril Wecht and Gwen Elliott, a member of the Pittsburgh Police and later founder of Gwen’s Girls.

The results revealed that most babies were found dead after sleeping outside of cribs, such as in a family bed. Bannon explains her thought process: “I said, ‘Could it be that … it’s not just how you put the baby down to sleep on his back or tummy, but where the baby is sleeping?’”

In 1998, Cribs for Kids officially started as a program with the help of future Pittsburgh Mayor (and then president of city council) Bob O’Connor and District Attorney Stephen Zappala. Bannon started the program off by calling Toys “R” Us branches and asking them to sell Graco Pack ’n Plays — which are federally regulated for infant sleep — at a discounted rate. That transitioned into an agreement with Graco in which cribs were sold directly to Cribs for Kids and then shipped out — a challenge itself, as distributing large items, house by house, is no easy task.

While driving to work one morning, Bannon spotted a Pitt Ohio Express truck and decided to call to see if it could handle the shipping. After a conversation and an explanation of what Cribs for Kids wanted to do, the president and CEO of Pitt Ohio Express, Charles L. Hammel III, offered to donate shipping, an agreement that continues to this day.

Cribs for Kids eventually expanded into New York City with the help of former Mayor Michael Bloomberg. With more money coming in, Cribs for Kids was able to expand further, creating new programs and eventually becoming an international nonprofit.

One of the new programs — a safe sleep certification program that would allow hospitals to receive certificates verifying they completed staff safe sleep training — was bolstered by the passage of a 2010 bill that Bannon spearheaded for five years. Pennsylvania Act 73 of 2010 mandates that any mother who gives birth in a Pennsylvania hospital must be given safe sleep education before leaving the hospital.

Today, Cribs for Kids has 1,800 partners and more than 500 hospitals certified through its safe sleep certification program, as well as one international partner in Israel. Despite its international reach, the organization still relies on volunteers to package the safe sleep kits in its headquarters in Hazelwood.

“It could only happen in Pittsburgh, because it’s Pittsburgh,” Bannon says. “Where but Pittsburgh would somebody running a little nonprofit, like I was, be able to get the ear of a future mayor of Pittsburgh, the district attorney, the coroner, the police department, to all gather together to solve the problem?”