412 Food Rescue fights food insecurity by saving excess food that would otherwise fly off the shelves and right into landfills. 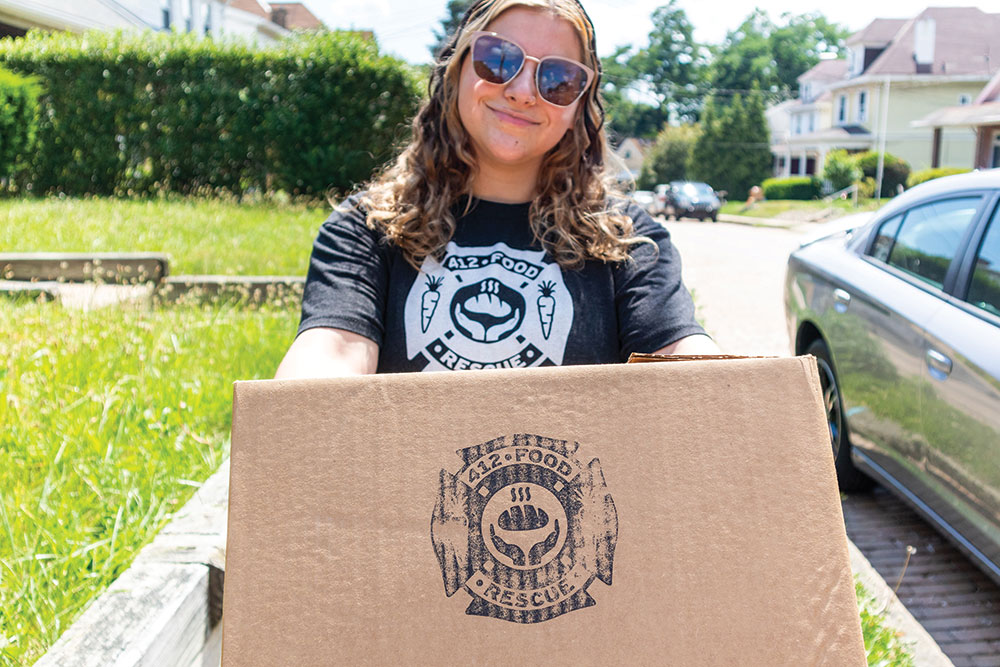 Sustainability doesn’t always mean conserving water or shopping with reusable bags. In the case of 412 Food Rescue, it means eliminating food waste — one donation at a time.

Founders Leah Lizarondo and Gisele Barreto Fetterman created 412 Food Rescue based on the belief that good food belongs to people, not landfills. The company uses volunteers from across Western Pennsylvania to pick up and deliver excess food from various donors, which are then distributed to individuals facing food insecurity.

Following its launch in 2015, volunteers were gathered through Facebook groups and text messages, but this method proved to be inefficient. In 2017, the company launched Food Rescue Hero. This ridesharing-style app gives its volunteers notifications each time a donation is available; if they choose to accept it, the app will give step-by-step instructions on how to get the donation to the dropoff point.

By 2018, similar groups in Philadelphia, Cleveland and San Francisco were asking to use the app in their own cities.

“We realized that we had an opportunity to grow that network and help more places either start doing food rescue or take their existing food rescue and grow it and make it better,” says Jennifer England, head of partner development at Food Rescue Hero and COO at 412 Food Rescue.

The Food Rescue Hero Network now includes 17 partner areas across North America, all of which use Food Rescue Hero to facilitate food distribution. Partners are also offered access to Food Rescue University, which teaches best practices for all aspects of food rescue, from how to grow one’s food donor program to using data to improve metrics.

“Some of them have been doing food rescue for 30 years and don’t need that — they just need the technology,” says England. “Others are just starting out and need to know how to do food rescue, so we support them with both the technology, our knowledge base and our staff.”

All a Pittsburgh volunteer needs to do to get started is download the 412 Food Rescue app and start picking up donations. Once a volunteer picks up a donation, they take it to one of 600 distribution partners in southwestern Pennsylvania. Some common dropoff locations are housing authorities, food pantries, soup kitchens, senior high-rises or veterans programs.

However, the coronavirus pandemic presented a set of challenges for the 412 Food Rescue model. Food recipients would normally go to food pantries or shelter common rooms to obtain their groceries, but the pandemic made these types of gatherings impossible for many high-risk individuals.

To combat this issue, 412 Food Rescue added a new feature to its app: home deliveries. Now, once volunteers complete a quick background check within the app, they are able to pick up donations and deliver them directly to a recipient’s home.

“Home deliveries were a way for us to help pantries and other organizations get food directly to their people. It also helps broaden access for people because they can get food in the course of their regular lives,” says England, noting organizations range from the Islamic Center of Pittsburgh to the Pittsburgh Restaurant Workers Aid group.

Another solution to the problems caused by the pandemic was expanding on an existing partnership between 412 Food Rescue and the Housing Authority of the City of Pittsburgh that aims to get food to its residents.

“Our bagging program is something where volunteers come in and they help us break down large donations and put them into individual bags for seniors or families. Then, those are dropped off at the door of Housing Authority residents,” England says.

“The effects of the pandemic are not gone — there were big changes in terms of hunger, which continued today. We’re seeing much more widespread hunger that goes deeper and is more prevalent in groups that maybe it wasn’t before.”

Earlier this year, the nonprofit achieved a major milestone with its longtime partner Giant Eagle. In April, 412 Food Rescue marked more than 3 million pounds of food saved from the supermarket chain.

“The system is built to throw away food — 412 Food Rescue changes that model. It upends it completely. It’s this big system change that takes good food out of the waste stream and gets it to people who need it,” says England.