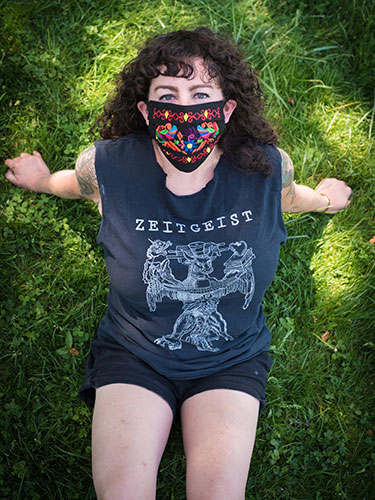 Maggie Meskey’s professional life is defined by spending time with people. From her first gig 20 years ago as a bartender at Foster’s Bar & Grill in Oakland to her most recent position as general manager of the Richard DeShantz Restaurant Group’s Meat & Potatoes and Fish Nor Fowl, Meskey has typically spent upwards of 60 hours each week making sure that guests at the bars and restaurants she worked at felt taken care of.

As a founding member of the city’s chapter of the United States Bartenders Guild and a mentor to front-of-house workers around town, she is an essential stitch in the fabric of Pittsburgh’s growth into a city that can be proud of its restaurant and bar offerings.

Like thousands of restaurant managers, chefs, bartenders, dishwashers, servers and hosts throughout the region, however, Meskey was jobless within days of Gov. Tom Wolf’s March 16 decision to close in-room dining at restaurants. Finding a quieter sense of bearing hasn’t come easy. “I felt a sudden grief. What if I don’t have a purpose? What if this goes on longer than the couple of weeks they said it was going to last?” she says. “And it has.”

That sense of existential anxiety has thoroughly permeated Pittsburgh’s service industry community. For a sector that depends largely on tipped wages, an overwhelming sense of dread is a rational reaction when you have no idea when it will be safe for you to return to work. Yet there was an immediate call-to-action for service industry members to help one another — a fitting response from a group that takes pride in making someone else’s day a little better.

“There were grocery and diaper distributions. And companies like Sysco [food distributor] invited people to take whatever extra food they needed. That instant reaction calmed a lot of, ‘Will people notice me?’ anxieties. Pittsburgh is a blue-collar town. People heard the people that needed help and took care of them,” Meskey says.

Meskey took the stay-at-home order seriously, making trips outside her home only when necessary. Social hours on Zoom and long conversations on the phone replaced after-shift drinks and national conventions with her large social network in Pittsburgh and around the country.

By posting helpful information on social media — anything from where to get a meal pickup to a thoughtful article about the state of things — Meskey has remained a leader and even broadened her community, creating new, at-a-distance friendships in the process. “You think that everyone knows each other, but you really don’t. And having that in common that you can’t do your job, when you want to work and you can’t, unites people. We’ll be able to see each other where we work, eventually,” Meskey says.

While virtual happy hours and cocktail classes allow for a modern type of kinship, Meskey also found a connection to barspace be re-watching a classic television sitcom — “Cheers.” “Sure, it’s dated. But, the themes are timeless. And it shows you how much that the bar is a part of their social space. It can be a home away from home,” she says.

Two months in, Meskey turned her attention to what might happen as things reopen. Restaurants and bars aren’t merely places to acquire food and drink; they’re designed for human interaction. How, in a space meant to be social, can people feel comfortable and safe? What will it be like for a restaurant to operate at limited capacity? Will the general public participate in the process if they want to see bars and restaurants succeed? “It’s a two-way street that’s going to be very carefully navigated by the guests, too. The workers, who will make these special and coveted social interactions possible, alongside diners who are looking for a much-needed night out on the town, deserve to feel safe and comfortable,” she says.

Those spaces won’t be the same as they were, at least for the foreseeable future. But, Meskey says, they will be back. “As a whole, we probably took them for granted a little bit. For Pittsburgh, restaurants are a connection.”